“The most important thing we can do now to transition from rapid recovery to stable, steady growth is to bring inflation down,” says an Op-Ed published over Joe Biden’s name in this morning’s Wall Street Journal.

With that in mind, Biden meets this afternoon with Federal Reserve chair Jerome Powell.

For months now, Biden has made it plain that the onus of curbing inflation in time for the midterm elections falls on Powell’s head. For instance, last January: “A critical job in making sure that the elevated prices don’t become entrenched rests with the Federal Reserve.”

So we’re reasonably sure that while a lot of hemming and hawing will go on, the gist of the conversation will be this:

Biden: You got my back on this, right? Tell me you’ve got my back. You’re gonna reel this inflation thing in…

Powell: Yes, Mr. President, I’ve got your back. We’re gonna reel it in.

Yes, Biden is strong-arming Powell — even as he has to keep up the pretense of respecting the Fed’s “independence.” 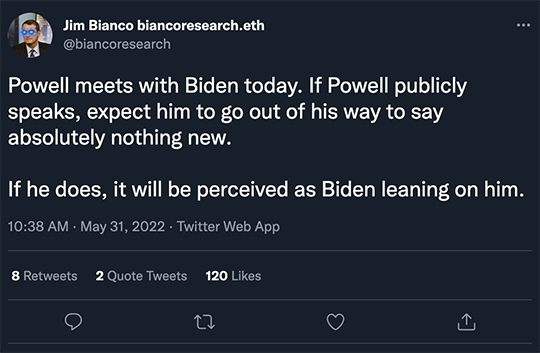 For a quarter-century, three consecutive presidents — Clinton, Bush 43 and Obama — rarely piped up about Fed policy. Establishment media started treating their silence as some sort of sacrosanct precedent.

The truth: None of those three presidents cared a whit about Fed independence. All three of them simply had the good fortune of running for re-election at a time the economy was “good enough” relative to when they took office. They had no need to carp about Fed policy.

Then along comes Donald Trump — who frequently and publicly leaned on the Fed to keep mashing the monetary gas pedal. The irony was thick — the guy who warned in 2016 about a “big, fat ugly bubble” begging the Fed to inflate it fatter and uglier.

The elite media tut-tutted about how Trump was yet again “violating norms” by disrespecting Fed independence. In reality, he was harking back to earlier times.

For one thing, the first President Bush pressured the Fed to stimulate ahead of his 1992 re-election campaign… and later blamed the Fed for his loss.

And even earlier than that, the truth about Fed “independence” was spoken rather plainly by the hapless Arthur Burns.

Burns was the Fed chair who opened the monetary spigots to help Richard Nixon win re-election in 1972 — an act that set the stage for near-runaway inflation during the Jimmy Carter years.

As legend has it, a German reporter asked him why he pursued such a reckless policy. Burns replied that a Fed chairman must do what the president wants or else “the central bank would lose its independence.” Heh…

As we said at the start of the year, “propping up the stock market” is no longer within the Fed’s unofficial sphere of responsibility. That’s a first in well over three decades.

Right now, getting inflation under control is more important. The 45% of Americans who don’t own stocks are the ones getting hit by inflation harder than anyone else. Indeed, it wouldn’t surprise us if the words “civil unrest” came up during recent Fed meetings. (We won’t know for sure until the transcripts are released in five more years. Transparency.)

Earlier today, European Union leaders agreed to a compromise embargo on Russian oil. By year-end 2022, the EU will cease to import Russian oil by ship. That’s about two-thirds of the EU’s crude imports.

Imports via pipeline will still be allowed — a concession to Hungary — but even on this score, Germany and Poland have promised to swear off pipeline imports.

Yes, the likes of China and India will be happy to buy the Russian oil that European leaders don’t want.

But rejiggering shipping routes doesn’t happen with a snap of the fingers — thus, a barrel of West Texas Intermediate is up more than three bucks at last check — to $118.35.

Elsewhere, the last day of May is looking much like the market story all year — stocks and bonds selling off in tandem.

Bonds are also selling off, pushing yields higher. The 10-year note is approaching 2.86%.

Alas, precious metals are not benefiting: Gold is back below $1,850 and silver back below $22.

With stocks and gold both in the doldrums, gold-mining shares are in the red today despite a big buyout announcement — Gold Fields taking over Yamana Gold for a 33% premium. Expect more consolidation among the gold majors in the months ahead.

Over the holiday weekend, the synchronized movement between Bitcoin and Ethereum broke down: Bitcoin has rallied well past $31,000… but Ethereum remains mired below $2,000.

On deadline last Friday, we overlooked an important economic data point: The personal savings rate — which blew sky-high with pandemic stimmy checks — has now sunk to its lowest levels since just before the 2008 financial crisis hit full-force… 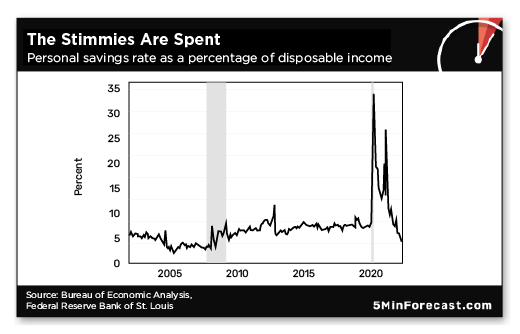 Is drawing down savings the only way to keep up with inflation? Sure looks like it…

The swoon in tech stocks notwithstanding, “it’s a great time to jump into Nvidia,” says our tech maven Ray Blanco.

The semiconductor giant ripped higher last week after booking record sales for the most recent quarter.

Not that it’s all unicorns and rainbows: “CEO Jensen Huang said that the war in Ukraine has affected its business in Russia,” Ray tells us. “Moreover, severe COVID-19 lockdowns hit the company hard in China. All told, these events will cost the company about $500 million in revenues in the current quarter.

“But that’s increasingly in the rearview now. The biggest hit to Nvidia is China, but with the country looking likely to open up next month, the drag should become a non-factor later this year.

“The company is a growth powerhouse with technology that’s second to none, and this quarter’s weakness is a buying opportunity. NVDA is increasingly dominant in high-performance computing applications, including not just data centers, but supercomputers and artificial intelligence applications.”

Even after last week’s rally, Nvidia is still down 44% from its crazy late-December peak. Ray says it’s a long-term hold… and Nvidia is one of those names that’s so big, we don’t think we’re doing his paying subscribers a disservice by mentioning it here in The 5. For access to all of Ray’s Technology Profits Confidential picks, look here.

Coming to a country near you? It appears China is encouraging adoption of its central bank digital currency by… giving some of it away.

The high-tech hub city of Shenzhen will hand out 30 million yuan — about $4.5 million — “in the latest example of cooperation between China’s digital currency and the country’s major internet service providers,” says the South China Morning Post.

Via the food-delivery app Meituan, folks will register for a lottery. Winners will get a virtual “red packet” — a traditional Chinese symbol of good fortune — with as much as 128 yuan ($19.18) of digital currency that can be spent through Meituan on groceries, food deliveries or bicycle rentals.

Shenzhen city fathers hope to “promote the orderly recovery of consumption while containing the COVID-19 pandemic.”

A telling passage from the Cointelegraph website: “Previously, the People’s Bank of China had identified the e-CNY as a potential tool for advancing regional economies and improving the efficiency of select financial services. Meanwhile, sources at Meituan say that the e-CNY plays a vital role in boosting spending and revitalizing local businesses.”

So there you go — a central bank digital currency rolled out more aggressively in the wake of a crisis. Consider yourself on notice…

“It’s not so spooky,” a reader writes after we noted on Friday how Moneyball Economics chief Andrew Zatlin detected a spike in hiring at U.S. defense contractors shortly before Russia’s invasion of Ukraine.

“The mainstream media were beating their drums for war with Russia all through January and February prior to the Russian action that began Feb. 24. What else to make of the Russian buildup on Ukraine’s borders?

“Before all that started, we were treated to ample helpings of concern about China making a move on Taiwan. The senior leaders of the defense contractors live in the same information environment that we all do, are aware of what the conventional wisdom thinks and undoubtedly were pressing all the usual buttons to staff up in anticipation of an expanded need for their services.

“None of this is intended at all to dispute the utility of Zatlin looking at hiring data. That makes good sense, especially in this case, when the corporate leaders were right. I’ve been employed by government contractors for 25 years or so, and I’ve seen them be wrong on occasion, too.”

The 5: All true. And you could have piled into defense stocks based just on the media’s murmurings. But there were a lot of murmurings in the spring of 2021 as well, and that time an invasion never materialized.

So we find the hiring-data methodology most intriguing…

“That was just too right on for words!” writes a Canadian reader after our final correspondent last week said if we’re going to act like communists, we should at least get the benefits.

“Boy, are our leaders ever acting like commies! Take our own prime mistake, Turdope! No, please, take him — and include his deputy dawg, Chrystia Freeland!

“They’re both card-carryin’ commies of the same yellow stripe, from inflicting the Emergencies Act against the Freedom Convoy (as unlawfully and heavy-handed as the tanks in Tiananmen Square) to Freeland’s request for anybody out there who could show her how to give us poor schleps a bank account haircut, à la Cypriot banks did to account holders there back when!

“And if all that wasn’t bad enough, they’re in tight with the World Economic Forum.”

The 5: We’re unfamiliar with Freeland’s banking gambit you allude to, even with your mention of Cyprus… and a search for “Chrystia Freeland bail-in” was no help. Care to elaborate?