The head of the World Bank has well and truly beclowned himself. Again… 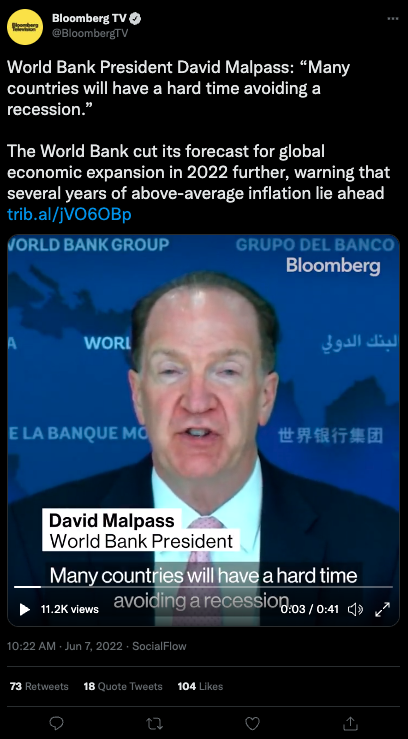 “The war in Ukraine, lockdowns in China, supply chain disruptions and the risk of stagflation are hampering growth,” World Bank President David Malpass said yesterday. “For many countries, the recession will be hard to avoid.”

It was in mid-March — a few weeks after Russia invaded Ukraine — when we told you Malpass was totally blowing off supply chain issues and rising prices. As Reuters summed up his position, “based on current assessments, he does not anticipate the crisis ending the global recovery and reducing global GDP.”

But it’s not only the Trump-adjacent Malpass who deserves a heaping helping of crow. There’s diehard Democrat and Treasury Secretary Janet Yellen.

Last week, we chronicled her confession to CNN that “I was wrong then about the path that inflation would take…

“There have been unanticipated and large shocks to the economy that have boosted energy and food prices. And supply bottlenecks that affected our economy badly that I didn’t, at the time, fully understand.”

“I do expect inflation to remain high, although I very much hope that it will be coming down now,” Yellen told the Senate Finance Committee yesterday.

She took the “L” for her insistence last year that inflation would prove “transitory” — a word repeatedly invoked both by her and by Federal Reserve Chair Jerome Powell.

“So as Chair Powell indicated himself, both of us probably could have used a better term than ‘transitory.’ There’s no question that we have huge inflation pressures, that inflation is really our top economic problem at this point and that it’s critical that we address it.”

Translation: “We’re sorry if the stock market will continue to struggle, but inflation is a way bigger priority.”

As we’ve said for five straight months now, the Fed no longer considers “propping up the stock market” as part of its unofficial mission — which is a radical change in policy after nearly 35 years.

It’s the 45% of Americans who don’t own stocks — the poor and working class — who are getting slammed hardest by inflation. It’s those folks the Biden administration is most concerned about going into the midterm elections. And for all their rhetorical nods to the Fed’s “independence,” Biden and the White House are bringing enormous pressure to bear on Powell and his crew at the Eccles Building.

Which means, according to our Jim Rickards, the next market downdraft is baked into the cake. And this one will be more steep and severe than anything we’ve experienced so far in 2022.

Before we move on to other matters, we need to debunk something Yellen said yesterday.

She denied the $1.9 trillion “American Rescue Plan” signed by Biden 15 months ago has anything to do with roaring inflation now.

“We’re seeing high inflation in almost all developed countries around the world,” she said. “And they have very different fiscal policies. So it can’t be the case that the bulk of inflation that we’re experiencing reflects the impact of the ARP.”

Pardon the spaghetti-looking chart we’ve nicked from Bianco Research here. But it’s the only way to demonstrate Yellen is — if we may invoke an overused term these days — gaslighting us.

“The U.S. stimulated (‘mailed money’) the most and has the highest inflation rate in the developed world,” tweets Bianco Research chief Jim Bianco.

We’d love to hear Yellen dismiss that as sheer coincidence…

To the markets — where oil is soaring to three-month highs and one of the world’s top commodity traders is warning about crude’s chart going “parabolic.”

“We have got a critical situation,” says Jeremy Weir, CEO of Trafigura. “I really think we have a problem for the next six months… once it gets to these parabolic states, markets can move and they can spike quite a lot,” he said at a conference sponsored by the Financial Times.

Weir anticipates oil of $150 or higher in the coming months. This morning, a barrel of West Texas Crude fetches $121.74 and Brent — the global benchmark — is pennies away from $123. Meanwhile, AAA’s national average gas price is $4.955 — nine cents higher than Monday.

We wish the FT editors had followed up with Weir about the news during the last big spike in crude prices during March — that his firm was scrambling to raise capital so it could meet margin calls.

As the former hedge fund manager Marc Rubinstein tweeted at the time, “Trafigura is the biggest company you know least about. $230 billion in revenues, yet no stock price or credit rating.”

Meanwhile, the U.S. stock market is treading water on this hump day.

The major indexes have oscillated a quarter percent or less compared with yesterday’s closes. The S&P 500 is down nine points at 4,151. Treasury rates are moving back up, the 10-year note over 3% again.

The solar stocks got a nice bump this week with a little (or a lot) of help from the White House.

Earlier this year, the Commerce Department was looking to impose tariffs on solar panel components from Cambodia, Thailand, Vietnam and Malaysia. Those four countries account for about 80% of U.S. solar panel imports.

Just the prospect of those tariffs prompted importers to halt shipments — not least because the tariffs were going to be imposed retroactively.

But early Monday morning, the Biden administration authorized duty-free solar imports from those four countries for the next two years.

With that, the solar stocks gapped higher on the open — including SunPower Corp. (SPWR). Thus, an instant 58% windfall for readers of The Profit Wire — the trading advisory where I team up with Alan Knuckman to trade ahead of the news.

Less than a month ago, The Profit Wire’s proprietary indicator was lighting up on SunPower — suggesting that connected insiders were loading up on bullish SPWR bets, knowing something that wasn’t yet public knowledge.

It was a textbook Profit Wire trade — followed up this morning with a 50% gain on Halliburton amid the spike in energy prices.

The Profit Wire is currently closed to new subscribers. Watch this space for updates.

Stupid food-naming tricks: Having solved all other problems under its purview, the FDA is embarking on a jihad against almond milk.

According to reports from both Wired and Mother Jones, the FDA is preparing a decree that the word “milk” on food labels must be confined to animal products. Thus almond milk, soy milk, oat milk and such would have to be named something else.

Indeed it’s the latest and maybe most outrageous gambit in a decade-long campaign of lawsuits, lobbying and regulations against “veggie burgers” and similar products. (Our favorite among many we’ve chronicled — Arkansas’ ban on “cauliflower rice.”)

At least all of that’s taken place on the state level. Now it’s going federal.

Of course, the National Milk Producers Federation says it’s only acting in the best interest of consumers — who it says are “being misled about the nutritional content of plant-based imitators relative to real dairy products, creating marketplace confusion and inappropriately blurring well-defined standards of identity.” Puh-leeze…

“Dave, with this upcoming deadline of Jim Rickards’… plus what looks like the effects of a triple witching on Friday, June 17, with several trillion of derivatives due for settlement I understand…

“… you would think AEM and the gold shares would be heading higher.

“Perhaps it’s a delayed reaction of some sort. Have you guys any comments?”

The 5: If we wanted to, we could devote at least a minute out of our 5 Mins. every day to why gold stocks aren’t performing the way we think they “should.”

But that would be a crashing bore. Whether you’re into majors or juniors, the gold miner stocks as a group require the courage of your convictions… and a whole lot of patience to match. (And yes, I say that from personal experience.)

“If the powers that be succeed in banning cash,” a reader writes, “the street price/value of non-KYC Bitcoin and physical gold and silver in the hand will go to the moon.

“They are harping on money laundering and tax evasion. What they should really fear is this “outside money,’ as Zoltan Pozsar terms it, supplanting fiat dollars entirely.”

The 5: Yeah, who knows what sort of underground economy might emerge?

But even China isn’t a fully cashless society yet. It’s just further along than anyone else. Bank notes still circulate… but the biggest denomination is 100 yuan, or about $15.

We’re sure that many elements within the American deep state would love to do away with the $100 bill as an intermediate step toward going cashless.

But we’re equally sure other elements within the deep state — mostly the CIA and the Pentagon — still see pallets of $100s as essential to carrying out their own dark arts overseas. Heh…