Yes, the media are starting to invoke memories of 2008. “Liquidity in the market is worse than it was leading up to Lehman,” Christian Hoffmann tells Bloomberg.

Hoffmann would know, having worked for Lehman Bros. at the time it imploded in September 2008. Lehman, you might recall, was the seminal “oh s***” event of the global financial crisis.

Now a portfolio manager at Thornburg Investment Management, Hoffmann says tight liquidity “creates even more risk, because if the market doesn’t have liquidity, it can gap down very quickly.”

During the summer before Lehman blew up, a young analyst at our little firm saw what was coming: He spotted a way to play it, and his readers soon walked away with gains of 462%.

Good news: That analyst, Dan Amoss, is still on our team 14 years later. He heads up research for our macro maven Jim Rickards.

As you know — because we keep on telling you, heh — Jim Rickards is certain that come tomorrow the Federal Reserve will set in motion a sequence of events ending in a major stock market collapse, well beyond what we’ve already witnessed this year.

Meanwhile, thanks to selective media leaks, the mercurial Mr. Market has recalibrated his expectations of what the Fed will do tomorrow.

About 45 minutes before the market close yesterday, The Wall Street Journal’s Fed reporter Nick Timiraos posted a story that began thus: “A string of troubling inflation reports in recent days is likely to lead Federal Reserve officials to consider surprising markets with a larger-than-expected 0.75% interest rate increase at their meeting this week.”

Timiraos is the Fed’s preferred conduit for “authorized leaks” — as was his predecessor at the Journal, Jon Hilsenrath. If the Fed wants to telegraph something to the market, Timiraos gets the first phone call.

Funny thing is the Fed is currently in a “blackout period” — during which Fed pooh-bahs are strictly limited in the public statements they can make.

These blackout periods typically begin 11 days before the start of a Fed policy meeting. The current one started a week ago Saturday.

So Timiraos’ story isn’t attributed to any Fed officials — even though their fingerprints are all over it. He simply wrote that before the blackout period began, they intended a 0.5% increase, “but they also had said their outlook depended on the economy evolving as they expected.”

That’s a remarkable passage — Fed officials admitting the economy is not “evolving as they expected.” Not exactly great for their credibility, right? But evidently their calculus is that their credibility would take an even worse hit if they stuck to their previous plan to raise only a half percentage point in the face of raging inflation.

Anyway, Timiraos’ article — and a “confirming” story from CNBC after the market close yesterday — had the desired effect.

So a three-quarters percentage-point increase it is — something the Fed hasn’t done since 1994.

But more important than the magnitude is the fact any increase is happening at all. This is the third-consecutive increase… and the reason Jim Rickards is issuing what he calls his “third and final warning” this year.

What the Fed is doing tomorrow will trigger a chart pattern that’s preceded nearly every market crash since 1919.

After three trading days of relentless selling, the major U.S. stock averages have found a bottom — for now. They’re still down, but not by much.

Bonds continue to sell off, pushing yields higher: The yield on a 10-year Treasury note busted through the 3.25% barrier yesterday and as we write is up to nearly 3.42%. Meanwhile, the two-year note is up to 3.39% — leaving a minuscule gap before the two-year rate exceeds that of the 10-year. That’s an “inverted yield curve,” and a precursor to recession.

Crude is up more than two bucks to another three-month high at $123.05.

Small-business owners are as glum as they’ve ever been in their working lives, judging by the National Federation of Independent Business’ latest survey.

The headline number on its “Optimism Index” isn’t too awful — ticking down slightly in May to 93.1, on par with the period from 2011–2016. But when it comes to expectations for business conditions during the next six months, the response is the weakest in the 48-year history of this survey.

“Expectations for better business conditions have deteriorated every month since January,” write NFIB economists Bill Dunkelberg and Holly Wade. “Small-business owners remain very pessimistic about the second half of the year,” Dunkelberg adds, “as supply chain disruptions, inflation and the labor shortage are not easing.”

Asked to identify their single-most important problem, 28% of survey respondents cite inflation. But good help is still hard to find, with 23% citing “quality of labor.” Taxes and personnel costs are tied for third place, each cited by 12%.

If conference attendance is a reliable gauge, metals and mining are the sectors to be in for the rest of this decade.

This week marks the first in-person gathering of PDAC — the Prospectors & Developers Association of Canada — since March 2020.

“The crowd is so large that Toronto police have a crowd control unit on site,” reports Byron King — our firm’s resident geologist. “A 45-minute wait outside the convention center just to enter, and a 90-minute wait for access once inside.” 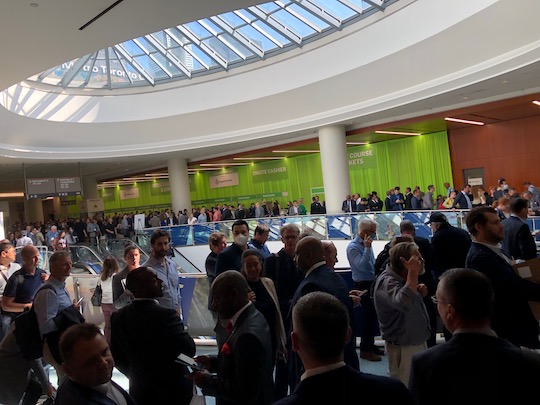 A packed PDAC conference, as seen from Byron’s phone

Byron has attended many PDAC conferences in the 15 years he’s been on our team. We asked him how attendance this year compares with a few years ago — when it seemed the entire commodity space was on its heels.

“Back in 2015 and early 2016,” he replied, “the conference was not terribly well attended. Sure, many regulars who show up every year — but also many empty spots where booths should be.

“This year is sold out. Every spot that can hold a booth is sold. Many companies had to be turned away.”

And the ones that made it in aren’t just telling promising stories to prospective investors about the geology of their mine sites — Byron says there’s also “plenty of deal-making and raising funds.”

Conclusion: After a decade of airy-fairy “technology” plays puffed up by the Federal Reserve’s easy money, “mining is the new big thing. Real things. Good deposits. Hard assets, anyone?”

As time goes by, we’ll keep you apprised of the best opportunities in this space. In the meantime, you might consider the SPDR S&P Metals & Mining ETF (XME). Don’t pile in all at once, though; if a recession really is setting in, you’ll want to dollar-cost average over time.

You can’t make this stuff up, Part 1: “The lessons learned from America’s Great Inflation, by both the Fed and political leaders, make a repeat of that experience highly unlikely.”

Of course, this is the same guy who in 2005 pooh-poohed the threat of an expanding housing bubble: “We’ve never had a decline in housing prices on a nationwide basis.”

You can’t make this stuff up, Part 2: The White House appears to be shocked that U.S. oil producers can’t simply open a tap and bring more oil to market.

From the Financial Times: “‘When the White House started calling around in a panic, they thought shale oil production could grow sharply in the near term — like in a matter of months or quarters,’ said Bob McNally, head of consultancy Rapidan Energy.

“‘They were shocked to learn that that’s like asking for blood from a stone. It’s almost impossible.’”

According to the Department of Energy, U.S. crude production peaked in late 2019 at nearly 13 million barrels a day. For much of this year, it’s been stuck around 11.7 million — high demand notwithstanding.

U.S. producers are in no hurry to get back to 2019 levels — mostly because Wall Street is reluctant to lend them money. For one thing, Wall Street remembers lending scads of money for drilling projects between 2010–2014 — only to then witness the oil price collapse from over $100 to under $30 in 18 months. Too, Wall Street is increasingly of a “green” mindset, reluctant to deploy capital for fossil fuels.

All of this is well-known in the industry. But only now is the White House tumbling to the reality.

“Dave Gonigam is right,” says a reader email — after we suggested yesterday the Chinese Communist Party does not consist of evil geniuses playing 11-dimensional chess against America because, after all, they’re communists.

“The ‘Great Leap Forward’ was a real jump into the abyss (several dozen million casualties). The so-called ‘Cultural Revolution,’ unfortunately still little known in the West, was a 10-year period of collective madness and mass hysteria. It sometimes degenerated locally into a real civil war, and wreaked total havoc on the economy. The Chinese army had to take charge of many aspects of economic life to at least partially restore order, and that’s why many Chinese companies still belong to the army.

“At one point, during the Cultural Revolution, traffic laws were even inverted: vehicles had to stop at a GREEN light, and were mandated to go through a red light… on the grounds that the red color is the color of communism.

“This was a good rehearsal for today’s zany ‘zero COVID’ policy indeed.”

The 5: Good stuff. And worth thinking about with every story you read about how Xi Jinping is becoming the most powerful Chinese leader since Mao…