It’s becoming an every-six-weeks ritual: We send The 5 at exactly 2:00 p.m. Eastern Time on a Wednesday — coinciding with each step the Federal Reserve takes toward an epic market crash.

By the time you read this, the Fed will have raised short-term interest rates by three-quarters of a percentage point — something it hasn’t done since 1994.

We’ll unpack the nuances tomorrow… but in a way, they don’t really matter. What matters is that this is the third increase in three consecutive Fed meetings — a sequence that’s preceded nearly every market crash since 1919.

The Fed is raising rates to tamp down inflation. It hopes to achieve a “soft landing” — arresting inflation without landing the economy in recession.

“Either the rate hikes will cause a recession, which is one way to stop inflation, or the Fed will blink and stop raising rates, in which case inflation will spin out of control leading to asset bubbles and a market crash.

“Either way, stocks decline sharply. The Fed can run but it can’t escape its appointment with a market collapse.”

On to our main topic: We knew from day one that Western sanctions against Russia were doomed to backfire. But we’re stunned this morning by how badly they’re backfiring.

For starters, there’s this… 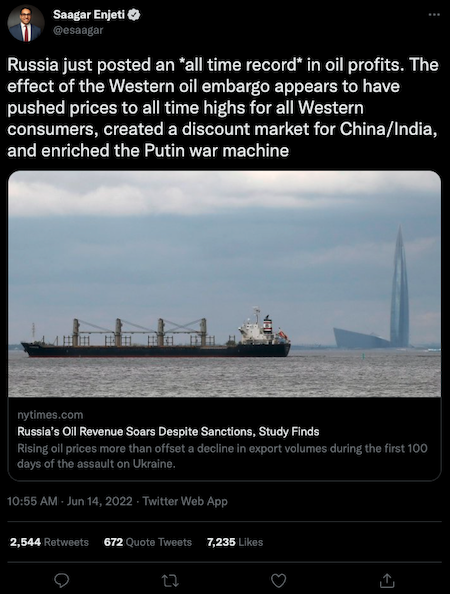 Yes, there are now hard numbers confirming our suspicions: Rising oil prices are more than compensating for any hit Russia took from curbs on its oil exports.

From The New York Times: “Russia earned what is very likely a record [$97 billion] in revenue from exports of oil, gas and coal in the first 100 days of the country’s invasion of Ukraine, according to data analyzed by the Center for Research on Energy and Clean Air, a research organization based in Helsinki, Finland.”

Oh, but it gets better… 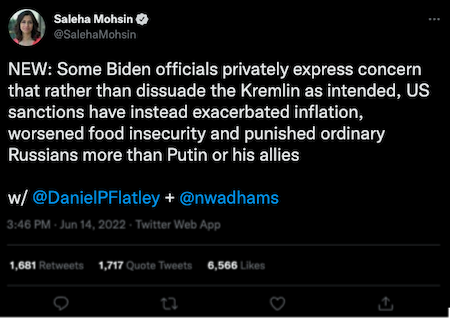 Per a story at Bloomberg, Team Biden is “privately expressing concern” that Vladimir Putin and his cronies are making out just fine amid the sanctions… while everyday folks worldwide are paying the price with accelerating inflation and food shortages.

“When the invasion began, the Biden administration believed that if penalties exempted food and energy, the impact on inflation at home would be minimal.

“Since then, energy and food have become key drivers of the highest U.S. inflation rates in 40 years, a huge political liability for President Joe Biden and the Democratic Party heading into November’s midterm elections.”

Reminds us of a meme we ran across this morning… 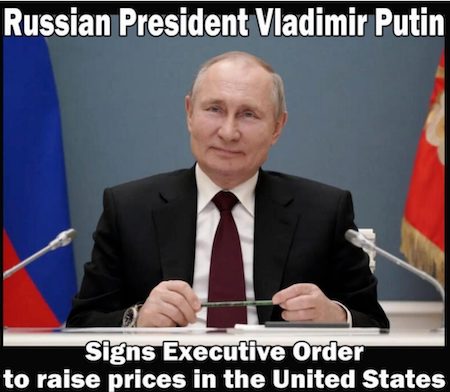 What happened is what we told you would happen in early March — a phenomenon called “self-sanctioning.”

The penalties for violating the sanctions are so severe that Western banks and other firms are being overcompliant. They don’t want to take on anything Russian-related — even when doing so would comply with the letter of the law.

“In some cases,” the Bloomberg article affirms, “companies have signaled that they are being extra-cautious or want clearer guidance from the U.S. before continuing business with Russia.”

It’s not as if Biden’s advisers should be shocked: The ones who were part of the Obama administration already witnessed this phenomenon as they waged economic warfare against Iran a decade ago.

In theory, food and medicine were exempt from the sanctions. But financial institutions were leery of processing any payments for Iran. As a result, kids with cancer had to go without chemo drugs and even basic painkillers.

And so now comes the backpedaling: “The U.S. government is quietly encouraging agricultural and shipping companies to buy and carry more Russian fertilizer,” says a separate Bloomberg story, “as sanctions fears have led to a sharp drop in supplies, fueling spiraling global food costs.”

Fertilizer is technically exempt from the sanctions, but again, no one wants to run the risk of offending the bureaucrats overseeing the sanctions. Thus, Russian fertilizer exports are down 24% this year.

It remains to be seen whether this “quiet encouragement” will make any difference. And even if it doesn’t, don’t expect a policy reversal: “There’s no sign that administration officials feel their sanctions policy was a mistake or that they want to dial back the pressure,” reports Bloomberg — even as “the collateral damage from the sanctions has been wider than expected.”

To the markets today — where it’s not just American central bankers who have traders on pins and needles.

So apparently the PIGS countries are in trouble again? That’s Portugal, Italy, Greece and Spain — whose troubles in the early 2010s brought on what our founding editor Addison Wiggin called “the world’s longest and most boring financial crisis.”

If the aim was to give a momentary boost to the European stock market, it worked: The EuroStoxx 50 index ended the day up 1.6%.

Crypto is selling off again. According to a report at The Block website, a Dubai-based crypto fund called Three Arrows Capital got hit with at least $400 million in liquidations and is now staring at insolvency.

The big economic number of the day confirms the Fed is “tightening into weakness” — that is, stomping the monetary brake pedal even as the economy is already slowing down.

Retail sales as measured by the Census Bureau fell 0.3% in May — in contrast with expectations for a 0.1% increase. It appears inflation-strapped consumers are limiting themselves to the food-and-fuel essentials: You see it in falling sales of furniture (down 0.9%), electronics and appliances (down 1.3%) and spending at “nonstore retailers” including online shopping (down 1.0%).

We also have our first two indicators that include data from the month of June: Factory activity in New York state slowed for a second-straight month — with the Fed’s Empire State manufacturing index still stuck in negative territory. And homebuilder sentiment as measured by the National Association of Home Builders is now the weakest in two years.

OK, it’s not a strictly financial story, but it’s just interesting: Sometime in the next three weeks or so, the U.S. Supreme Court will decide what is to come of America’s five remaining overseas territories.

Under the so-called “Insular Cases” at the turn of the 20th century, the court ruled that Washington, D.C., can rule foreign territories without granting constitutional rights to their inhabitants.

“Suddenly that decision is under fierce attack from within the Court itself,” writes author Stephen Kinzer in The Boston Globe. “The fate of America’s five populated colonies — Puerto Rico, the U.S. Virgin Islands, Guam, American Samoa and the Northern Mariana Islands — may hang in the balance.

“In April, the Supreme Court decided what seemed to be an abstruse case about federal benefits owed to Puerto Ricans. But Justice Neil Gorsuch’s opinion began with a startling passage.

“He asserted that the United States has no business deciding anything for Puerto Rico because our ownership of that island — and by extension other U.S. colonies — is unconstitutional,” Kinzer continues.

[Right on. Once again, Gorsuch affirms our impression that he’s the least worst among the nine robed cretins. Heh…]

Long story short, the Court might soon overturn the Insular Cases. And yes, the consequences for 3.5 million Americans-but-not-really-Americans are unknown. As Gorsuch wrote in the Puerto Rico case, “settling this question right would raise difficult new ones.”

Seems like either statehood or independence would be the only options, no?

One financial consequence that immediately comes to mind: What happens with all the U.S. citizens who moved to Puerto Rico for various tax advantages?

“Every time you quote mainstream economists, I kind of want to reflexively ask, ‘Where can I sign up?’” a reader writes — possibly in response to Ben Bernanke’s claim that persistent 1970s-style inflation won’t stage a comeback.

“When they are right (seldom, but it happens), it’s basically a ‘no s–t, Einstein!’ type of brilliant observation.

“More often than not, we get some sort of indication that 89% of economists were off by an average of 46.8% in their estimates of when the sun would rise this morning, and they think that’s pretty good, because last week it was 91% off by 51.6%.

“It strikes me that these people, just like our politicians and the rest of the self-anointed ‘elite’ (effete?), might benefit by a forced tour of the real world. If they survived, which certainly isn’t guaranteed, they would definitely come out with a clearer view of the world they claim the ability to understand.

“On another note, and I’ll take it on the chin for this one, what do you guys have on Jim Rickards that he shamelessly prostitutes himself like he does for these promos?” the same reader continues.

“For such an accomplished guy, he must really dread those sessions. I’ve watched a couple hoping against hope that they might be different and contain something new, but nope.

“I understand your business model, but that poor guy must really be in need of some real intellectual stimulation after recording one of those sessions. Sorry, but that’s one guy’s opinion.”

We’re fed up with the nonstop nonsense spewed by politicians, central bankers, conventional Wall Street types and the media. We feel a calling to bring reality to a wider audience, and a mission to help people survive and thrive despite the machinations of the power elite.

Anyone who responds to this calling and who takes on this mission goes in with the knowledge that aggressive marketing comes with the territory.

But as I’ve said over and over, I think the newsletter industry’s business model is way more honest and straightforward than one that entails kowtowing to external advertisers — or worse, taking payments from the investor-relations departments of public companies.

The overwhelming majority of our revenue comes through the subscription fees of readers like you. If we have to shout to get your attention once in a while, well, the whole idea is that after you give us your credit card number, we deliver on our promises and over time you feel a sense of belonging with a tribe of like-minded folks.

If ever we fail in that endeavor, it shows up on our bottom line in the form of cancellations and failures to renew. It’s powerful feedback.

When we succeed, however, it’s a win-win for everyone.

Best regards (and stay cool if you live in the hot zone),