You might think this sinister-sounding wordplay refers to some pinky-removing crime syndicate or comes directly from a script for a high-octane Liam Neeson vehicle. Instead, it’s Jackson Hewitt chief tax information officer Mark Steber’s take on the goons at the Internal Revenue Service.

And it’s particularly appropriate this month in light of millions of Americans receiving CP14 IRS notices in their mailboxes, forms that the agency is legally required — under normal circumstances — to mail within 60 days of the IRS discovering taxpayers have an unpaid balance.

Meaning, if you filed your taxes by 2022’s April 18 deadline, you might have already gotten a notice from the feds in June.

“The IRS sends a CP14 if it calculates that a taxpayer has a balance of more than $5 on their account,” says an article at CBS MoneyWatch.

“The CP14 will tell you how much you owe and request payment within 21 days.” But if you’ve received one, give it a thorough once-over before paying: the American Rescue Plan made tax rules notably opaque for 2021 tax filings. (Which is really saying something.)

And you can fight city hall — just be prepared with abundant documentation and/or to hold on the phone indefinitely. Alternatively, you can request a payment plan or apply for a financial-hardship delay.

It’s also important to consider: “The IRS charges 0.5% per month on unpaid taxes, up to a maximum of 25% of the total balance due, which can add up,” the article says.

Then there’s this: “If you don’t pay the amount due within 60 days, the IRS can move to collect on the balance and even place a lien on your property, such as your home or your car.”

Mr. Steber reiterates: “One of the things” the IRS is “really good at is ultimately getting their money.”

To that end, “the IRS issues roughly 9 million of these [CP14] letters annually,” says CBS MoneyWatch.

“This year, the letter is unusual given that the agency has stopped… sending more than 10 types of letters that cover issues such as failure to file a tax return to under-withholding taxes.”

Which is due primarily to titanic backlogs, including this one at an IRS facility in Austin, Texas… 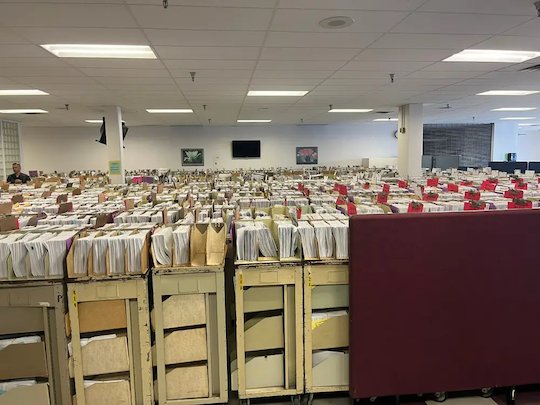 “Delays in processing returns have meant that some taxpayers have waited months to get their refund checks,” says Business Insider. “Without those checks, some Americans are struggling to afford childcare, groceries and even their homes.” (Overpaying the feds, of course — not a great idea.)

But what if, instead of a refund, you receive a notice indicating you owe more… as a result of a pandemic stimulus program?

Your editor today is especially salty on the topic, having received my own IRS nastygram earlier this month. Except in my case, it was Notice CP11, which specifically relates to the refundable Child Tax Credit.

If you recall, the American Rescue Plan’s “expanded” Child Tax Credit automatically enrolled some taxpayers into the following scheme: “From July 15 through December 2021, Treasury and the IRS will advance one half of the estimated 2021 Child Tax Credit in monthly payments to eligible taxpayers,” according to the IRS website.

I had reservations about this program for a number of reasons; chief among them was… the federal government. Secondly? Although I did have a 16-year-old dependent, I was concerned about eligibility. But in the rush-rush on “stimmy” payments, the feds were content to kick that can down the road.

And by the time I learned I had to go on the IRS website to opt out, it was too late. The “advanced” payment had already hit my bank account in July and would continue to do so for the next five months.

I had lingering suspicions, however, that come tax-filing season, the IRS would demand all the money back. So once my tax preparer delivered the bad news (we owed the feds significantly more than usual), and I reluctantly wired the Treasury Department, I thought the score was settled. That is, until I got the notice in the mail…

My CPA was flummoxed: “The tax rules were such a mess!” The IRS admitted as much early this year, even going as far as setting up a website dedicated to the 2021 Child Tax Credit — this after the agency issued letters with erroneous information to many taxpaying parents.

But regardless of being well and truly pissed off, I was fortunate to have saved enough to repay the government. Plus, when I noticed that the IRS form states, “We are required by law to charge interest” — $5.10 had already been levied against me — I paid immediately, not wanting to cough up another cent in interest.

Notwithstanding, I couldn’t help thinking how devastating the same letter would have been for 32% of American households that reported last year they couldn’t cashflow a $400 emergency.

Finally, if I’m getting this straight, over the past year, this “free” money helped to fuel inflation… and now it’s getting sucked back out, making the coming slowdown that much worse. Not that it’s a huge factor by itself, but it’s a contributor both on the way up and the way down.

Then there’s oil, which has plunged almost 6% to $110.85 for a barrel of West Texas crude, representing a three-week low. “[Recession] fears helped pressure U.S. gasoline futures down by over 7% with analysts worrying high gasoline prices will start impacting demand for the fuel,” Reuters reports.

“Automobile group AAA said the price of diesel at the pump hit a record high $5.798 per gallon on Friday, while the price of gasoline hit its record of $5.016 earlier in the week.”

Per the crypto market, Bitcoin’s holding the line above $20,000; same goes for Ethereum, white-knuckling above $1,000.

And according to the Federal Reserve, U.S. industrial production expanded only 0.2% on a monthly basis in May, shy of the consensus estimate of 0.4%. Placed alongside April’s reading of 1.4%… just weak.

Then there is May’s manufacturing output, which declined to 0.1% after three straight months with an average of nearly 1%. To cap things off, the Fed says: “Capacity utilization edged up to 79.0%,” but is still, “0.5 percentage points below its long-run (1972–2021) average.”

“Usually Powell does a better job,” says Jim, “even when he’s not sure what he’s talking about. But in this case, the confusion came through.”

At one point, Powell stammered: “I do think that… our objective is to bring inflation down to 2% while the labor market remains strong… Many factors that we don’t control w are going to play a very significant role in deciding whether that’s possible or not… The path for us to get there… is not getting easier.”

Jim continues: “He said interest rates of 3.5%, unemployment of 4.1% and inflation of 2% would qualify as a successful policy effort and a ‘soft landing’ for the economy.

“While Powell’s goals are reasonable, they have little chance of success…

“Powell made a number of comments that were badly detached from reality given existing data,” Jim says. Here’s one example: “Real GDP has picked up this quarter,” Powell said.

“Actual GDP for the first quarter,” Jim notes, “was negative 1.5%, and projected GDP for the second quarter (from the Federal Reserve Bank of Atlanta) is 0.0% as of today. Technically, moving from negative to zero is a ‘pickup,’ but it’s dangerously weak and hardly a reason for confidence.”

And Powell’s coup de grâce of claptrap conclusions? “It does appear the U.S. economy is in a strong position.”

“Nonsense!” Jim remonstrates. “The GDP numbers are only 0.0001% away from a recession…

“A recession is defined as two consecutive quarters of declining GDP. First-quarter GDP already declined. Second-quarter GDP is estimated at 0.0%. It takes only the smallest rounding error,” says Jim, “to push the second quarter into negative territory.

“In other words, we may be in a recession already,” Jim says. “To call that a ‘strong position’ is delusional.”

Earlier this month, South African passengers called out budget Irish airline Ryanair for requiring them to pass a questionnaire before entering the U.K.

It’s a story of biblical proportions, in fact, using a shibboleth to prove one’s nationality… 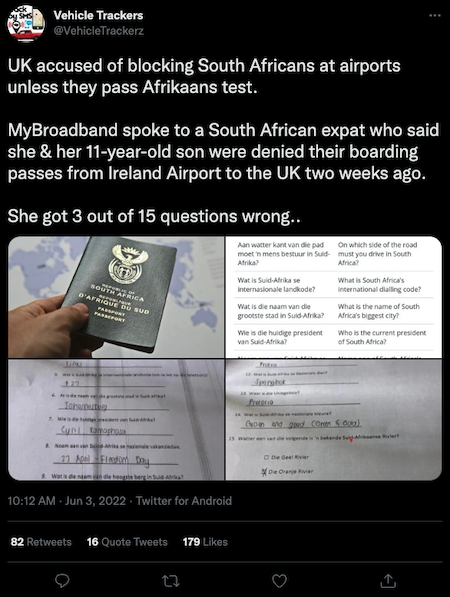 “Our team issued a test in Afrikaans of 12 simple questions,” said Ryanair CEO Michael O’Leary during a press conference on Tuesday. (But other sources suggest the questionnaire consisted of as many as 15 questions.)

This was a measure to crack down on “a high prevalence of fraudulent South African passports,” according to the airline. “Ryanair’s spokesperson said that fliers who failed to answer the questions would be ‘refused travel and issued with a full refund,’” noted Al Jazeera.

The thing is just 12% of South Africans actually speak Afrikaans, and for many, the language represents the white-minority apartheid government.

But after the British government publicly distanced itself from Ryanair’s questionnaire and the South African government called it an instance of “backward profiling,” CEO Michael O’Leary backed down. Sort of?

“[South Africans] have no difficulty completing [the test],” he protested. Well…

“But we didn’t think it was appropriate either. So we have ended the Afrikaans test because it doesn’t make any sense.”

Gotta wonder if Mr. O’Leary could pass a similar questionnaire. In Old Gaelic. Just sayin’… Try to enjoy the weekend!

P.S. We’ll be back tomorrow with Saturday’s highlight issue (which just might put you in the mood for a Big Mac). But the market is closed Monday for Juneteenth observance, meaning your regular weekday 5 Min. Forecast will resume Tuesday. Take care!