Please note the dates on these two tweets from the playboy economist Nouriel Roubini of New York University. The one on the left is more recent… 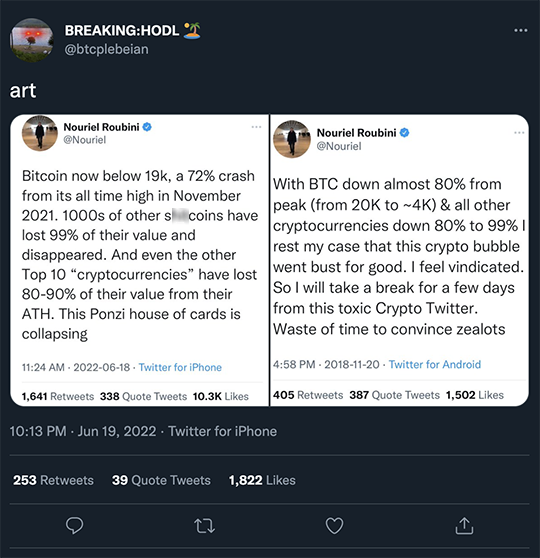 Here’s the problem for crypto: At this moment in financial history, it trades like a “risk asset” along with stocks.

“Along with stock markets, cryptocurrency has been absolutely hammered by recent economic events,” says our crypto evangelist James Altucher.

And leveraged players are taking the biggest hit: “The sudden drop in prices of cryptocurrency has created a situation where people who borrowed money to buy cryptocurrency are being forced to sell.

“They don’t want to sell, but they are forced to sell in order to pay back these loans.

“This makes a bad situation worse… the market goes down, forcing people to sell, which makes the market go down even further.”

Compounding the problem: “Unlike traditional financial markets,” James goes on, “cryptocurrency markets allow for very high borrowing — for example, 100-to-1 leverage where you can borrow $100,000 for every $1,000 in collateral.

“For obvious reasons, I never recommend this sort of trading or borrowing. As we can see now, when the market turns negative, it’s easy to lose everything when trading this way.

“On the other hand, this sort of leverage also is what drives the insane returns of cryptocurrency in boom times. Investor borrowing allows tremendous money to be pumped into the cryptocurrency markets, which create the 1,000% returns we’ve seen in recent years.”

And that time will come again…

“Long term, I remain confident that cryptocurrency will grow in its impact and influence on everyday life,” says James.

Which brings us back to where we began today: See, there’s a crucial difference between the “crypto winter” of 2022 and the previous one in 2018.

The problem for now — as James himself acknowledged in this space last January — is the rather circular quality to that explosion in crypto activity. “The biggest crypto exchanges mostly just trade… crypto. Crypto is being used for crypto things. If crypto were to disappear, the main thing that would be affected would be crypto!”

James’ fervent hope was that 2022 would be the year that would change. “We can theoretically trade stocks (or anything, for that matter) on the DeFi exchanges. I want to see McDonald’s and Exxon traded on DeFi exchanges. We MUST see crypto start to bleed into the real world.”

Alas, events that are inevitable aren’t always imminent: “While cryptocurrency markets might be down for the moment,” James acknowledges now, “I’m still optimistic about the long-term potential.

“These short-term price corrections are great opportunities to buy some of the best cryptocurrencies at attractive prices.

“The important thing is to remain focused on the long-term opportunities and ignore the short-term dips.”

In that regard, the guidance in James’ Big Book of Crypto is still as relevant as ever. If you still haven’t dipped your toe into crypto, really there’s no better time than now — when it’s absolutely hated. Follow this link for your introduction.

Gee, what was it we said about crypto trading in tandem with stocks? You see exactly that in today’s market action.

Wall Street is on a tear as the week winds down; it might even register the first positive week in four weeks.

Sure enough, Bitcoin is back above $21,000 and Ethereum is pushing the $1,200 level. For better or worse, that’s the impact of institutional investors who’ve taken the crypto plunge in the last couple of years.

The big economic number of the day shows there’s still life in the housing market: New home sales jumped 10.7% in May, more than expected. Even better, “it seems that supply coming on to the market helped boost sales in the lower end of the price range,” says a summary from Econoday. As a result, the median price of new construction fell slightly to $449,000.

The Federal Reserve puts the banks through this charade every year — running the banks’ numbers in the event of an economic downturn. Once again, everyone gets a participation trophy.

The scenario entailed 10% unemployment by the third quarter of 2023 and a 55% drop in the stock market. Result? The banks would lose “only” $600 billion.

These tests — instituted after the 2007–09 financial crisis — have gone through several permutations, but one thing remains constant. The name notwithstanding, these “stress tests” are less a grueling treadmill workout than they are a leisurely stroll through the park.

Amid alarming headlines from “alt” financial websites about an imminent financial meltdown in Japan, our own Jim Rickards is more sanguine.

True, Jim bruited the possibility of “a complete collapse of the Japanese financial system and government bond market” last month… but at the moment, the more likely outcome is an ugly grind down.

But no, an intervention from Japan’s central bank is not in the cards. “Haruhiko Kuroda, governor of the Bank of Japan, is retiring in a few months,” Jim explains. “He is looking forward to what the Japanese call Amakudari, or the ‘Descent from Heaven,’ which describes retirement from a government job. The retiree can look forward to a remunerative post-retirement with appointments to think tanks, institutes and private company boards.

“Kuroda is literally counting the days. If he makes any important policy moves, he has very little upside and enormous downside if his moves trigger a market panic or financial crisis. So he’ll do nothing to jeopardize his Amakudari. Kuroda will leave monetary policy to his successor.

“That’s the Japanese way. Investors can expect a weaker yen and weaker stocks (measured in dollars) in the meantime.”

Boring, we know. But we figure it’s a necessary antidote to the alarmist takes you see elsewhere.

It’s both the best of times and the worst of times in the mining business.

Our Byron King, fresh from witnessing a flurry of deal-making at a packed PDAC conference in Toronto, has flown over 2,500 miles to the northwest — to Canada’s sparsely populated Yukon Territory. “I’m on a visit to a variety of exploration and mining sites.”

Yes, copper, zinc, lead and gold command premium prices by the standards of, say, 2015–16… but miners’ costs are soaring too.

Byron ticks off a list: “Diesel fuel (double price). Lubricants (pricey and harder to obtain — engine oil shortages). Spare parts for everything (definitely with Caterpillar equipment). Concrete. Steel. Wiring. Electronics. Trucking. Third-party services like road construction and maintenance. New and used work vehicles (when you can get them). Labor for sure. Food for the camp kitchen. Aircraft rental, which is the only way to get into remote sites.”

In addition, “everyone talks about the rising cost and inconvenience of travel — expensive airline tix, rental cars, hotels and food with a notable decline in quality.” That’s important in a business that thrives on face-to-face dealmaking. “Fewer trips, more Zooms — not necessarily a bad thing. But it impacts business. More friction inside the system.”

Speaking of inconvenient travel, how about a jaunt to Switzerland? 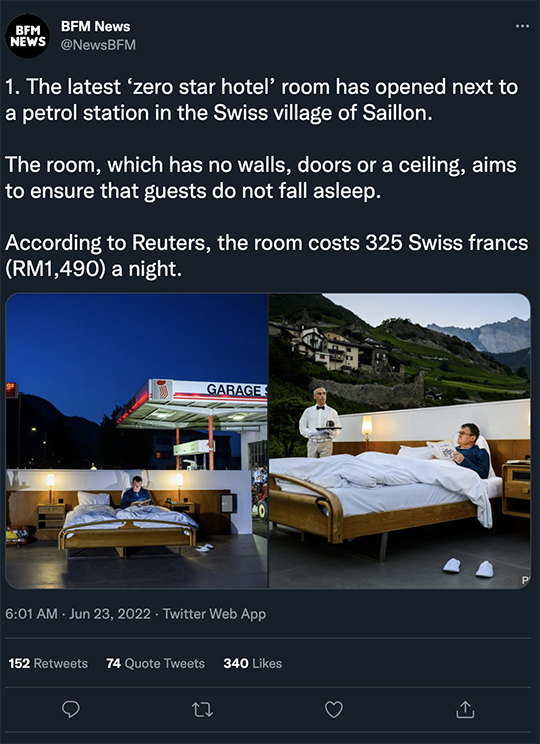 From the Reuters newswire: “‘I couldn’t sleep’ and ‘My room was too noisy’ may be complaints hoteliers dread from guests, but for the Riklin brothers that is the entire point of their latest ‘zero-star hotel’ art installation.”

For the not-insubstantial sum of 325 Swiss francs (about $340), you can stay on a double bed with no ceiling, no walls and no doors — and in the shadow of a gas station, no less.

Artists Frank and Patrik Riklin say it’s an ideal spot from which to contemplate the world’s troubles.

“Sleep is not the point,” says Frank Riklin. “What’s important is reflecting about the current world situation. Staying here is a statement about the need for urgent changes in society.”

Hmmm… Presumably that includes “climate change”? Makes us wonder how much jet fuel customers will burn to reach this otherwise picturesque locale in the French-speaking part of southwest Switzerland.

Anyway, you’re not entirely roughing it: Butler service with drinks and breakfast is included in the price.

Oh, as long as we brought up climate change, a reader weighs in on our main topic Tuesday — or rather, a parenthetical thought we tossed in at the end.

“Coal-fired power plants back up and running in Germany?” he writes. “So electric cars are burning coal!”

In their candid moments, the power elite lets on what the real endgame is — i.e., American adults limited to the energy equivalent of 40 gallons of gasoline per year, max.

But for the moment, we’re supposed to believe $5 gasoline is as bad as it gets, right?

See, there we go, ending the week on a downer. Sorry. We’ll try better…