BRICS countries — Brazil, Russia, India, China and South Africa — came together in economic solidarity 16 years ago. Ever since, at least according to President Xi Jinping’s summit opening remarks: “The giant ship of BRICS… has embarked on a righteous course of mutual support and win-win cooperation.”

Vaunting rhetoric aside, BRICS is a force to be reckoned with; by population alone, BRICS nations completely outnumber G7 nations — 3.2 billion versus an anemic 777 million.

And soon, BRICS might be getting even bigger (and changing its acronym?) after the group announced Argentina and Iran have applied for BRICS membership.

“Iran and Argentina are jumping on the bandwagon because they sense an opportunity to build an alternative alliance to Western-led globalization,” says an article at UnHerd.

If added, BRICS — plus Argentina and Iran — would account for 33% of the world’s GDP. “Beyond this, the potential for synergies between the countries is enormous,” the article continues.

“Meanwhile, the other BRICS members are inviting them on board because they smell blood” due to “the quick collapse of the Western sanctions against Russia.”

So the abject failure of Western sanctions is the thing that’s galvanized BRICS in 2022… D’oh!

“There’s an old saying that when you’re deep in a hole, you should stop digging,” says our macro authority Jim Rickards. “The Biden administration keeps digging…

“The sanctions on Russia have backfired in every way possible…

“On top of those failures, the West is driving the BRICS to form new trading and investment blocs and possibly a new reserve currency.

“On the initiative of Russian President Putin, BRICS began to consider the formation of a new international reserve currency.” Yeah, Putin said so himself… 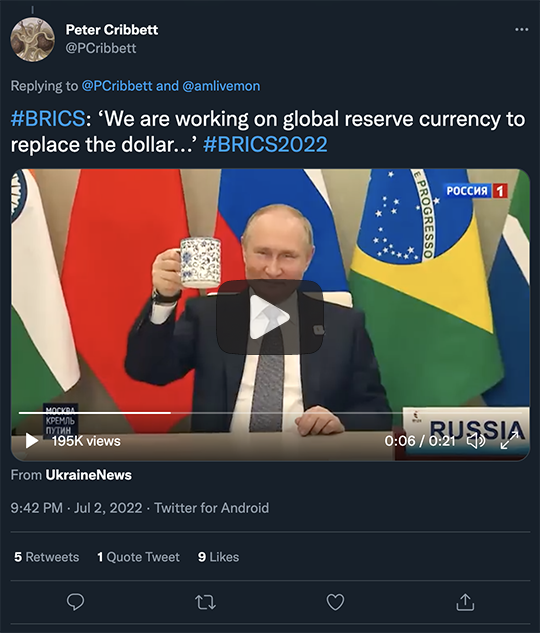 “None of the BRICS currencies is safe enough or has large liquid bond markets based on its currencies to replace the dollar,” he notes. “But a new currency in digital form, backed by a basket of commodities or gold, could provide a satisfactory substitute,” says Jim.

Indeed, according to a CoinDesk article: “Researchers at Russian bank VEB suggested that the country issue a gold-backed stablecoin for international payments to evade sanctions.”

Jim adds: “The new currency would probably start out as a payment currency for trade and investment among the BRICS and their associate members. Eventually, it could graduate to reserve currency status.”

And this just in: Saudi Arabia might be the next nation to join “BRICS+” — at Beijing’s request.

“Is this strategic geopolitical pressure from Saudi leader Mohammed Bin Salman (MbS) ahead of the meeting with Biden,” asks Gulf Insider, “or is this a genuine possibility that looms as likely?”

Regardless, “Joe Biden is being geopolitically slow roasted by Saudi Arabia” — burn! — and if the BRICS rumor is true, “then the tectonic plates of international trade, banking and economics are about to shift directly under our American feet.”

In response to BRICS+ end-running the U.S. dollar, he foresees Team Biden fighting fire with fire: “The U.S. dollar will be made obsolete. The cash currency we have now will be replaced with new, programmable digital tokens.” Making personal privacy obsolete too…

“But it’s not too late,” he says. “You can still protect your assets and your freedom… if you know exactly what to do.” Jim’s calling his project “Asset Emancipation” — follow his simple and easy-to-understand plan right here.

The yield on the 10-year Treasury is up to 3%… while the 2-year Treasury yield is at 3.04%; meaning the recessionary inverted yield curve is still in effect. 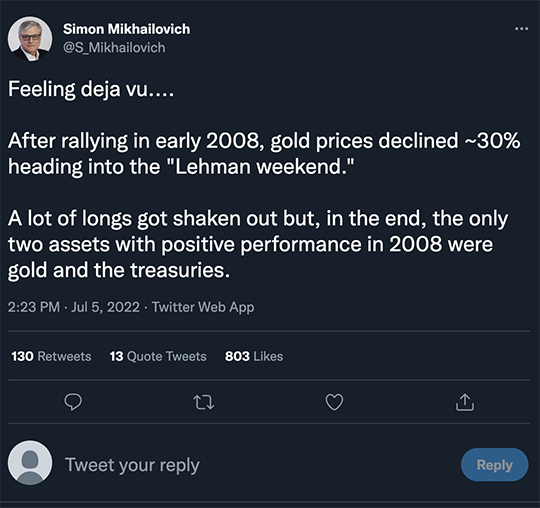 Something to keep in mind…

“Zimbabwe says it will introduce gold coins later this month as it tries to curb soaring inflation,” says a BBC article.

The gold coins — containing one troy ounce of 22-carat gold — will be available on July 25, according to the Reserve Bank of Zimbabwe.

“The gold coins will be available for sale to the public in both local currency and U.S. dollars and other foreign currencies at a price based on the prevailing international price of gold and the cost [of] production,” says John P. Mangudya of Zimbabwe’s central bank.

And if you thought U.S. inflation was bad? “Last month, the annual rate of inflation hit 191.6%, while the Zimbabwean dollar has lost more than two-thirds of its value against the U.S. dollar since the start of 2022.”

Alongside gold coins, Zimbabwe’s central bank has also “outlined plans to make the U.S. dollar legal tender for the next five years.”

“More than 5 million barrels of oil that were part of historic U.S. emergency reserves… were exported to Europe and Asia last month,” says an article on the Reuters newswire.

“The fourth-largest U.S. oil refiner, Phillips 66, shipped about 470,000 barrels of sour crude from the Big Hill SPR storage site in Texas to Trieste, Italy, according to U.S. Customs data. Trieste is home to a pipeline that sends oil to refineries in central Europe…

“Cargoes of SPR crude were also headed to the Netherlands and to a Reliance refinery in India,” the article says, with an additional shipment… to China? “The latest exports follow three vessels that carried SPR crude to Europe in April helping replace Russian crude supplies…

Germany’s energy crisis is intensifying (and we’re still months away from winter).

On Saturday, officials in Hamburg announced the city would be rationing hot water because of the “acute gas shortage,” according to Business Insider.

“We are in a much worse crisis than most people realize,” says Hamburg’s environment senator Jens Kerstan. “The more we save now, the better the situation will be in winter.”

To that end, Kerstan is urging Hamburg residents “to take shorter showers, avoid full baths and install modern thermostats and water-saving shower heads,” the article says, but the city is considering restricting the “availability of hot water to certain times of days.”

And then there’s this… 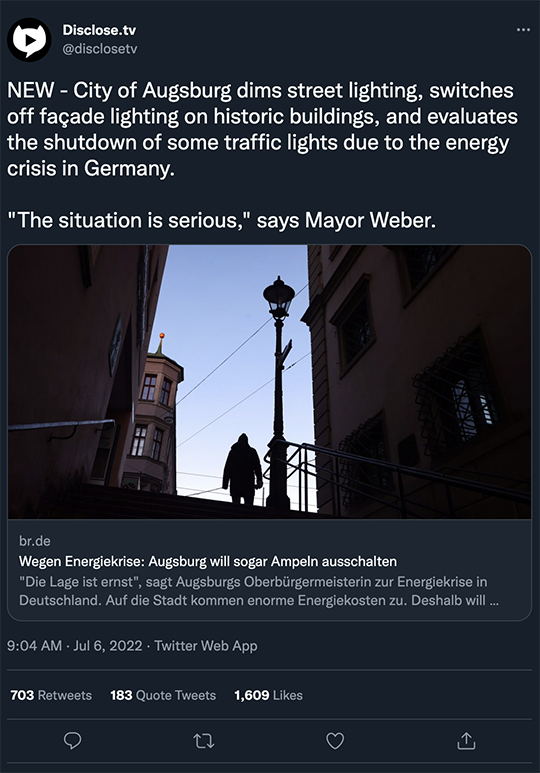 “Germany is scrambling to plug the gap in gas supplies,” the article says. “[The country] previously imported around 55% of its gas from [Russia] but… this had fallen to 35% by mid-April.

“Germany says that Russian imports could account for as little as 10% of its natural gas consumption by summer 2024.” Alternatively, Russia could bring Germany — and the EU — to its unwashed, freezing-cold knees…

For another weird moment in real estate, this painstakingly renovated Michigan home has a certain cartoonish quality… 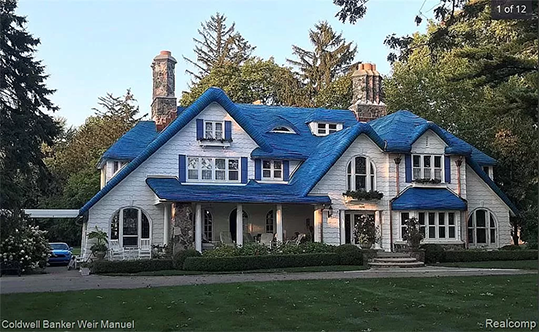 But if you were expecting a tiny house fit for Papa Smurf and Smurfette, this 7,500-square-foot lakeside mansion has seven bedrooms, eight baths, plus space in the garage for six cars.

So how much will this property set you back? The seller is asking almost $4.2 million (although the Zillow estimate clocks in at $3.8 million).

Buyer beware: Avoid neighbors named Gargamel as well as cats who answer to Azrael. (Yes, I was a latchkey kid!)

Now, from the ridiculous to the frightening, more readers weigh in on the prospect of the draft…

“Not a chance,” says a retired military officer. “No one in Washington has the intestinal fortitude — or political will — to make ‘hard’ decisions.

“Army recruiting is down for all the reasons mentioned previously (fatigue, wokeness, zero pride in citizenship).

“The Military Intelligence Corps, however, wants more technology. Why send troops when you can build hundreds of suicide drones for $30,000 each? As I’ve told my peers for years, force a transition into a lighter, faster, tech-heavy fighting force.”

“Given the direction the U.S. government and Supreme Court have gone over the last few years, implementation of a new draft is certainly possible.

“It seems that they are in the process of rolling back individual rights (starting with women’s rights), but there’s no reason to believe they’ll stop there. Isn’t being forced to go fight ‘for your country’ just another infringement on personal rights?

“Hopefully the vast majority of Americans would vigorously fight bringing back the draft.”

“If I had a draft-age child I would fund his or her escape,” says another. “I served, and I regret it very much. It’s past time we allow the wealthy to benefit from the lives of our children.”

The 5: Your editor today has one draft-age daughter (if the military goes there)… and one 17-year-old son. The prospect of a draft is personally terrifying; as my husband reminded me the other day, the “only son” bypassing the draft is just a myth. Heh, helpful…

And our final contributor today notes: “Enrollment in the Army is always up when there is a recession and high unemployment.”

Who knows? Maybe some Facebook flunkies — alongside other Big Tech casualties — will be enlisting?

Take care, and we’ll be back tomorrow!