The Bestselling Drug in History (Warts and All)

Human trials began in 1998. “Dubbed D2E7, this experimental drug was part of a new wave of therapeutics taking the biotechnology world by storm,” explains our science-and-wealth maven Ray Blanco.

“It was a therapeutic antibody — an engineered version of an immune system component, designed to be highly specific to an exact molecular target.”

“TNFα is an important immune signaling component, also known as a cytokine,” Ray says. “When the body detects infection, damage or the formation of cancer cells, immune system cells release TNFα into circulation, producing an immune and inflammatory response, which includes destruction of existing cells.”

The FDA issued its first approval for D2E7 to treat rheumatoid arthritis in 2003. You might know it better by the name… Humira.

Over time, the uses went far beyond that one autoimmune disorder.

“As it turns out,” Ray goes on, “when TNFα regulation is out of whack, it can lead to all kinds of disease conditions” — everything from Alzheimer’s disease to cancer to depression.

Thus, “the role of the TNFα cytokine in multiple inflammatory diseases would open the door for Humira to receive subsequent approval in additional indications” — a long list including psoriatic arthritis and Crohn’s disease.

“By 2020, the potent multivalency of the world’s first antibody therapeutic was generating a whopping $20 billion in annual sales for its current owner, AbbVie.”

And yet Humira “can produce serious side effects,” says Ray — “like damage to the sheaths of nerves or liver damage.

“Also, the manner in which Humira suppresses TNFα to treat autoimmune disease weakens the immune response against infection and developing cancers, a problem that led the FDA to slap the drug with a black box warning.

“Moreover, as an antibody therapy, Humira can only be delivered by injection, forgoing the convenience of an oral therapy. And since Humira is basically a large-protein molecule, it doesn’t cross the blood-brain barrier, reducing its potential as a therapy to treat inflammatory conditions of the central nervous system.”

Point being, anyone who can perfect a new therapy addressing Humira’s shortcomings could take control of a $30.4 billion market by 2025.

Or when Medivation came through with a prostate cancer treatment in 2006 — generating 11,534% gains by the time Pfizer acquired the firm a decade later.

That’s generational wealth. And it could happen all over again with a company that currently trades for under $5.

Ray lays out the opportunity in front of you when you click here. Don’t wait long, though — this is a fast-moving story, and you want to get in as close to the ground floor as possible.

The new week begins the way much of 2022 has gone — with stocks in retreat and tech taking the biggest hit.

Among the big movers — Twitter, down nearly 7% after Elon Musk said late Friday he’s withdrawing his offer to buy the company outright. Twitter’s board promises litigation; Musk says come at me, bro… 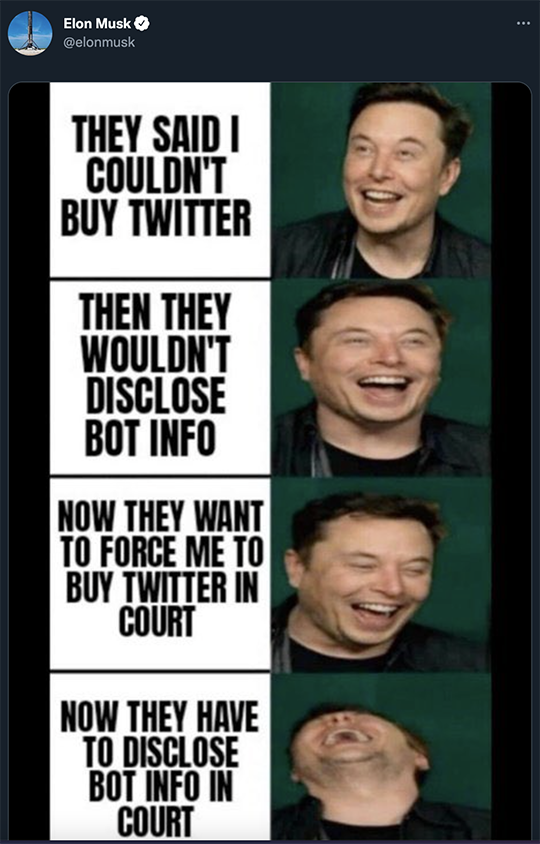 Yeah, the discovery process could be interesting…

Bonds are rallying, pushing yields down; the yield on a 10-year Treasury note is back below 3%.

Oil stocks are down 24% from their peak a month ago… but “I still think you can make a good bit of money holding oil stocks this year,” says our Zach Scheidt.

The consensus on Wall Street is that a recession is approaching and demand for oil will go into a tailspin.

But from where Zach sits, “this creates an opportunity — especially when looking at the details of how these stocks trade.

The easiest way to play it is an ETF; Zach suggests the S&P Select Energy SPDR (XLE). But he adds, “My team and I are looking more closely at individual stocks in the area.”

Because the mainstream has lost interest in supply chain snags, it’s up to folks like us to relay the following trade-press headline: “There’s Still Over $40B in Cargo on Containerships Waiting Offshore,” according to the essential publication American Shipper.

“There were 125 containerships waiting off North American ports on Friday morning, according to an analysis of ship-tracking data from MarineTraffic and queue numbers from California,” writes Greg Miller.

What’s different now is that the bottlenecks have shifted away from the West Coast. “Only 36% of waiting ships were off West Coast ports, with 64% off the East and Gulf Coast ports.”

But according to the supply-chain software outfit Project44, that’s not because the situation is improving out west; instead, “Project44 attributed the shift to importer fears of West Coast port labor disruptions.” Oy…

The biggest traffic jam of all is off Savanna, Georgia — where on Friday, 36 containerships were hanging out in the vicinity of Tybee Island, waiting for berths.

What a mess. Can’t imagine the folks reliant on the Tybee tourist trade are very happy, either…

As a reminder, our Jim Rickards is all over the supply-chain fiasco even if the mainstream has moved on to other things. His latest book Sold Out is due for publication this fall.

We went in search of quirky news from the business world to bring you a measure of comic relief… and immediately got dragged back into the dystopian dreams of the control freaks and power trippers. 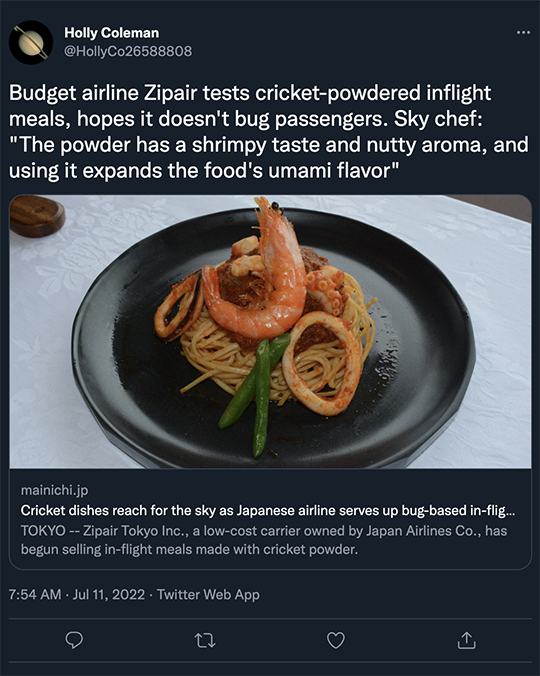 “Zipair Tokyo Inc., a low-cost carrier owned by Japan Airlines Co., has begun selling in-flight meals made with cricket powder,” according to The Mainichi newspaper.

“Edible crickets are attracting attention as an environmentally friendly food,” the paper says, “and the company hopes that environment-conscious customers will want to dig into the new offerings.”

For about $11, you can get a tomato chili burger or “pescatore” seafood pasta. “Each dish contains 4.5 grams of edible cricket powder developed by Gryllus, mixed into the burger buns and patties, and into the pasta’s tomato sauce…

“According to Gryllus, edible crickets require less food than livestock and mature far more quickly. High in protein and rich in vitamins and minerals, they are expected to be one solution to food shortages.”

We won’t belabor the point… other than to say we’ve seen this coming for more than two years.

“Bringing back the draft is possible — but very unlikely,” a reader writes as one of our main topics from last week still has legs.

“Just look to what happened during the early-mid 2000s bungled Iraq and Afghanistan invasions for context. The military was short of people, but Bush the Younger-type politicians were terrified of owning up to their massive strategic blunder (and inflated egos) and pissing off voters with Vietnam-era mass demonstrations against the draft. Thus began the ‘backdoor draft,’ which was officially referred to by the military as the ‘stop loss’ policy.

“Active-duty members were told to ‘suck it up’ and placed on an endless deployment schedule. Active-duty Army was stretched to 15-month-long deployments, with a few months back home in between to ‘regroup and retrain,’ and then go right back. On top of that, those that had completed their contracts were told those contracts had been ’indefinitely extended’ and they could not leave the military.

“National Guard and reservists were called up to active duty to ‘fill the gaps’ — and then placed on the endless deployment cycle with minimal equipment and training. Not exactly what they signed up to do.

“How do I know this? I lived it. I was on active duty at the time. A lot of my friends got completely burned out, divorce rates were sky-high and military families took the brunt of the sacrifices. This also led to a military recruiting ‘crisis’ as most people got the hell out as soon as their contracts were up or the ‘stop loss’ policy was lifted.

“So keep an eye on ‘stop loss’ being reinstituted for active-duty military — and ‘activation’ of National Guard and Reserve units in addition to singing bonuses and lowered standards for new recruits — before freaking out about a nationwide draft. Once that happens, we’re really screwed.”

The 5: Here’s a new wrinkle: Turns out about 12-13% of Army National Guard and Reserves have refused mandatory COVID vaccination.

That’s about 40,000 guardsmen and 22,000 reservists who “are no longer allowed to participate in their military duties, also effectively cutting them off from some of their military benefits,” according to Military.com.

“Please ask Jim Rickards this: If the central bank digital currency becomes a reality, what do I do with all my gold and silver coins?”

The 5: That’s easy. They become your lifeline. “You might not be able to fight back easily in the world of CBDCs,” Jim says, “but there is one non-digital, non-hackable, non-traceable form of money you can still use. It’s called gold.”

It’s not your only lifeline, though. If you haven’t seen it already, Jim explains what’s at stake here.

Finally, staying with the topic of CBDCs, “Agustín Carstens from the Bank for International Settlements looks like he could flick his tongue out and swallow you whole from across the room,” a reader writes after Friday’s edition.

The 5: Oh sure, here we are at The 5, all high-minded about how we’re not going to mock someone’s appearance, even if he has a despicable totalitarian mindset, and then someone writes in… and does it for us.

And no, we’re not above publishing it. Heh…