Anatomy of a 700% Winning Trade

“I got in on the day you recommended and made a net of $7,000, which was seven times my $1,000 investment!” writes a happy subscriber to Jim Rickards’ premium advisory Countdown to Crisis.

We try not to pat ourselves on the back too often in these virtual pages. Best to keep the focus on our team’s out-of-the-box insights. Look ahead and not back. The name is The 5 Min. Forecast, after all.

But once in a while, an exceptional trade does so much good for so many readers, it’s hard to ignore.

It also offers us a chance to take you “behind the scenes” — and show you the methodology behind our most popular high-end trading service this year.

Rewind to March 11: “For years, it has been popular to say, ‘Company X will become the next Amazon,’” wrote Jim Rickards’ senior analyst Dan Amoss.

Dan’s been around the block a few times by now and knows Wall Street hyperbole when he sees it — a major reason he’s headed up our Rickards research unit for nearly eight years.

Of this “next Amazon” hoopla, Dan said, “Rather than being a thoughtful, accurate statement, this saying attempts to justify paying outrageous prices for companies that are delivering rapid revenue growth.”

In this instance, Dan had in mind Carvana Co. (CVNA) — the purveyor of used cars whose claim to fame is its gimmicky showrooms that look like a vending machine. 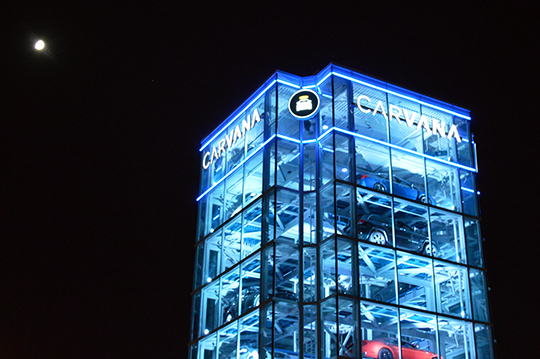 “Carvana,” Dan wrote, “has not yet proved that it has a profitable, positive free cash flow business. It may never be able to prove it.”

Here’s the thing: Amazon “is one of a kind,” Dan explained. “It’s proven to ‘grow into’ the persistently high valuation of its stock.

“In its youth, Amazon was not easily copied. It had excellent leadership that was intensely focused on metrics like return on invested capital and only entering markets that created value for shareholders.”

For the better part of two decades, Amazon was forever mocked for failing to turn a profit… but as we chronicled a few years ago, AMZN could have easily registered 10% profit margins much of that time. The reason it didn’t was that Jeff Bezos plowed every last cent of profit back into research and development in his quest for world domination. Hey, it worked.

To borrow Warren Buffett’s analogy, Amazon managed to create a “moat” as “the everything store” — a competitive advantage no one else could touch. Too many “next Amazons” fail that test… and Carvana fails it miserably.

Jim and Dan apply a “Bubble Score” to hundreds of stocks as they run their screens. On a scale of 1⁠–100, a score of 1 indicates a bubble that’s absolutely destined to burst. Carvana in mid-March had a score of… 4.

With that as the backdrop, Jim and Dan recommended out-of-the-money put options on CVNA — one of three bonus trades delivered on March 11 to every charter subscriber of Countdown to Crisis.

Fast-forward to May 12 and Dan writes an update for Countdown readers: “CVNA traded near $114 on March 11. It’s now near $36, after weeks and weeks of relentless selling.

“Carvana’s financial health has deteriorated significantly. Its cost of capital is now so high that a further slowdown in used car sales could quickly put it into financial distress. Bankruptcy risk by late 2022 is high. I would not be surprised if CVNA is trading under $10 by August.”

Fast-forward again to last Friday, July 15: CVNA is down to near $21. Dan’s recommended put options expire in August. Best to take 700% profits and not get greedy. Even a small rebound in CVNA’s share price could vaporize a huge chunk of that 700% gain. His guidance: “Today is a good day to take a profit.”

For an extremely limited time, we’re re-opening Countdown to Crisis at the charter-subscriber rate. Jim Rickards extends his personal invitation when you click here.

Stocks are starting the week in rally mode after another “authorized leak” from the Federal Reserve to The Wall Street Journal.

“Federal Reserve officials have signaled they are likely to raise interest rates by 0.75% percentage point later this month, for the second-straight meeting,” per a story posted yesterday morning by the Journal’s Fed reporter Nick Timiraos.

We’re in the midst of a “blackout period” during which Fed pooh-bahs are supposed to keep their silence before their next policy-setting meeting — scheduled to begin a week from tomorrow.

Timiraos’ story merely summed up the pooh-bahs’ public statements before the blackout period began. But by publishing the story at all, Timiraos is clearly telegraphing the Fed’s intentions with the Fed’s imprimatur.

Really, the charade is becoming quite tiresome…

But Wall Street is putting less weight on falling earnings and more on the earnings “beat” — at last check, Goldman was up 2.25% on the day. Ditto for Bank of America, up 0.5%.

Elsewhere, the sell-off in crude didn’t last long. A barrel of West Texas Intermediate is up huge, over $4, and close to $102 again.

The turnaround in semiconductors that our technology maven Ray Blanco anticipated last week is already underway.

Days after we spotlighted Ray’s outlook in The 5, Taiwan Semiconductor Manufacturing Co. bumped up its revenue outlook for the rest of 2022 — gloomy headlines about a “slowing chip boom” be damned. That’s a big deal, coming from the world’s biggest contract chipmaker.

“This shows that some very powerful investors are buying,” observes our income-investing specialist Zach Scheidt. “And these buyers obviously see a tremendous amount of value in these names.”

In fact, this kind of action suggests that semi stocks put in a bottom last month — after a 37% trouncing going back to last November.

Zach’s favorite buy in the sector right now is Qualcomm (QCOM), a specialist in smartphone chips. “QCOM generates reliable profits, trades for a reasonable multiple and pays a 2.1% dividend yield.”

For the record: A nationwide freight rail strike won’t happen until mid-September — if it happens at all.

Last week we gave you a heads-up that 12 rail unions representing 115,000 workers were on the verge of walking out, barring federal intervention.

That intervention came late Friday — when President Biden named a Presidential Emergency Board to begin arbitration. The practical effect is to put off a strike for another 60 days. 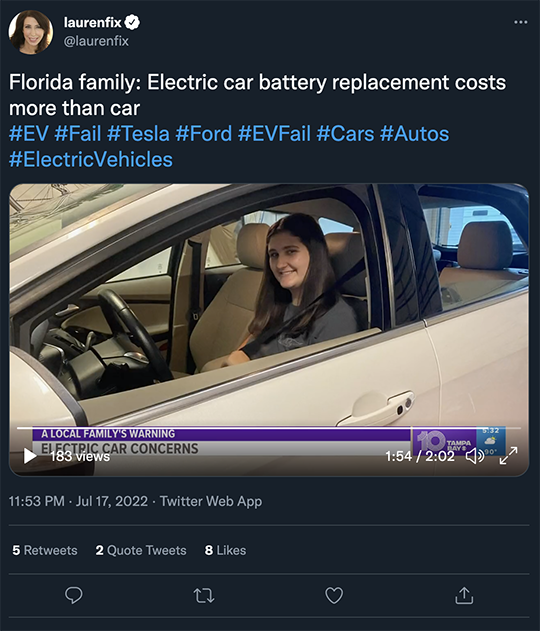 “It was small and quiet and cute,” she tells the local CBS affiliate. ”And all the sudden it stopped working,”

That was back in March. The battery was shot. A replacement would cost $14,000 — more than the car. And labor would be extra.

But it’s a moot point, actually: “The batteries aren’t even available,” says Avery’s grandfather Ray Siwinski, who’s been tasked with most of the legwork on this fiasco since Avery’s dad died of colon cancer last month.

And the issue isn’t limited to Ford Focuses (Foci?) “If you’re buying a [used EV],” says Mr. Siwinski, “you have to realize there is no second-hand market right now because the manufacturers are not supporting the cars.”

Elsewhere on the green-energy front, we offer the following public service announcement that’s ricocheting around the web of late… 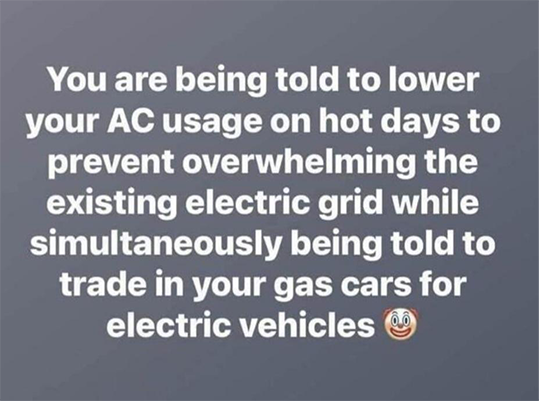 On the topic of Sri Lanka’s star-crossed venture into “sustainable” agriculture, a reader writes: “Just wanted to throw this out there: Organic farming should be the goal of the future and shouldn’t be lumped in with the green madness.”

The reader points us to a recent CDC report that finds traces of glyphosate in the urine samples of more than 80% of kids and adults who took part in a study. Glyphosate is the active ingredient in many herbicides, including Roundup — the subject of much litigation targeting Monsanto and now Bayer.

“A return to plant-based medicine over oil-based medicine as well as organic products needs to happen sooner or later,” the reader says. “Judging by stats like these, maybe it will only be a few years until the herd wakes up.

“Then again they still cling to the dollar like it’s not Monopoly money and scorn gold and silver, so maybe not!”

The 5: Good point. Just because a developing-country government makes the boneheaded decision to go cold turkey on chemical fertilizers does not mean “organic is bad” or that “industrialized agriculture is good.”

“I read and appreciate your efforts to edify the ignorant electorate!” a reader writes after our “energy lockdown” edition last Thursday.

The 5: Absolutely. You’re always welcome to forward an edition of The 5 to anyone you think might be interested.

Our email distribution is strictly limited to paying subscribers of our firm’s newsletters and trading services… but our voluminous archives are posted online and we encourage you to spread the word!