The Fed WANTS to Wreck Your Portfolio

This feels a mite hasty: “The bear market is over,” declares Jason Goepfert, founder of Sundial Capital Research.

As proof, Mr. Goepfert cites an astonishingly obscure factoid: “In modern markets, the S&P 500 has never lost ground over the following year when advancing volume was 87% or more of total volume for two out of three days coming off a 52-week low.”

No, don’t try to parse that sentence. You’ll only get a headache.

Instead, marvel at what modern computing power can do. You can sift through a half-dozen disparate data points, stitch them together and come up with an IT’S NEVER HAPPENED BEFORE conclusion that gets you a boatload of likes and retweets.

The fact that the process is impossible to express in plain English? That’s beside the point!

Anyway, in fairness, Goepfert acknowledges the limitations of his data set — we’re talking about 13 instances going back to the early 1960s — and he freely admits there’s a first time for everything.

More important, Goepfert’s signal does not preclude the possibility of the market falling — quite hard, in fact — over the next few days or weeks.

Here’s his chart, which we reproduce verbatim. Again, don’t try to make sense of the whole thing. Just notice the 13 red dots… 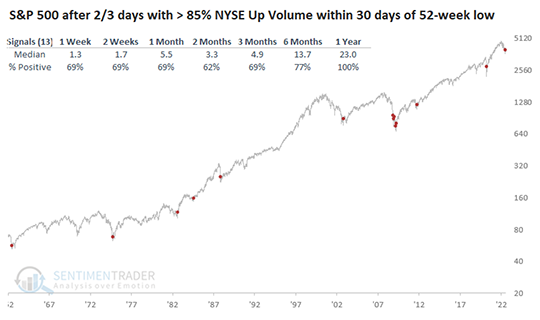 … and then notice several of those dots appearing in late 2008 amid the global financial crisis. At the time of the first dot in that bunch, the S&P was still in the neighborhood of 1,000.

Yes, the index was higher than that a year later… but in the meantime it collapsed by another 33%, finally bottoming in March 2009 at the infamous 666 level.

As we write this morning, the S&P is up 8% from its June 16 lows. A fair chunk of that increase came in the last week. It’s tempting to think the worst is over. We urge you to think again.

In recent weeks, a couple dozen editors and analysts at our firm have gathered on Zoom every Wednesday to thrash out the state of the markets and the economy. It’s a freewheeling exchange, often serving up spontaneous insights that wouldn’t emerge any other way.

The big takeaway from our session yesterday? Remarkably, it was something both the bulls and bears in our shop agreed on.

It might be one of the most important things you read all year — especially if it feels as if “the worst is over.”

At the risk of oversimplifying, the takeaway is this…

The Federal Reserve’s mission in the coming weeks and months is to actively tank your stock portfolio.

This is a sea change from the last 35 years of Fed policy — in which rising stock prices were a critical if undeclared part of the Fed’s mandate.

It’s even a sea change from six months ago — when we said the Fed was changing course and no longer had the stock market’s back.

Raging inflation was forcing the Fed’s hand: It could no longer stick with its easy-money policies that did so much to prop up the stock market in recent decades.

The Fed was more concerned about the fate of the 45% of Americans who don’t own stocks — the working class and poor getting slammed by inflation the worst.

Fast-forward six months to the present: The official inflation rate is the highest since 1981… and the stock market is recovering from its bear-market lows last month.

What does one have to do with the other? Well, it all comes down to something that Fed types call the “wealth effect.”

It works like this: If the stocks in your portfolio are rising, you feel better about both the economy and your finances, and you’re more likely to go out and spend money on a new home theater or a vacation.

It doesn’t matter if you’re in credit card debt up to your eyeballs and can’t really afford a new home theater or a vacation: As the Fed sees it, if your 401(k) balance is rising, you’re feeling more wealthy and you won’t mind splurging and maxing out your cards.

When Ben Bernanke was Fed chair in 2010, he penned a Washington Post Op-Ed — justifying his lavish money-printing policies by citing the wealth effect. “Higher stock prices will boost consumer wealth and help increase confidence, which can also spur spending. Increased spending will lead to higher incomes and profits that, in a virtuous circle, will support further economic expansion.”

The problem now — from the Fed’s standpoint — is that the “wealth effect” will only make inflation worse.

The thinking goes like this: If your 401(k) balance is rising and you’re more likely to max out your credit card, well, all that additional consumer spending will only add to demand for goods and services at a time when supply is constrained by supply-chain snags, the labor shortage and so on.

Constrained supply and rising demand translates to higher prices — which is exactly what the Fed does not want right now.

As a result, your typical Fed pooh-bah is looking at the S&P 500 sitting near a six-week high this morning and thinking this is a bad thing.

So that’s why we say the Fed’s mission in the weeks and months ahead is to actively undermine your stock portfolio.

We have every reason to believe the Fed will succeed — especially in light of the warnings our Jim Rickards has been issuing this year.

On three occasions, he’s eerily presaged three steep market drops — and now he’s warning about a “fourth horseman” of market doom. This fourth drop is shaping up to be the steepest yet.

For that reason, Jim is organizing a special live briefing for our readers from an undisclosed location in Washington, D.C. — set for this coming Sunday at 7:00 p.m. EDT.

We have only so much bandwidth to go around, so we ask that you register in advance. But it’s as easy as could be: Click here, enter your email address and you’re good to go.

Today’s market action? A mixed bag. To be sure, traders appear unfazed by the news that Joe Biden has come down with COVID. 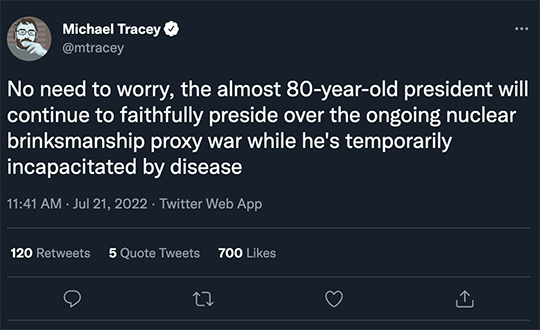 Really, the gods of comedic timing are smiling down: It was exactly a year ago today the president told CNN’s Don Lemon, “You’re not going to get COVID if you have these vaccinations.” Regardless, Pfizer is up a quarter-percent on the day and Moderna nearly 1%.

Among the headline earnings reports are Tesla — now logging two straight quarters of falling profits, thanks in part to China’s zero-COVID policy shutting down its Shanghai assembly plant. But as with Netflix yesterday, all that matters is beating Wall Street’s expected numbers and so TSLA shares are up 7.6%.

Elsewhere in the auto sector, Ford is looking to cashier as many as 8,000 white-collar personnel — nearly 20% of the salaried workforce — as the company focuses on its transition to electric vehicles. (But… but… what about all the green jobs?) Ford is up about 1%.

But that’s the price for front-month futures; lately, traders are noticing that actual barrels for delivery are collecting as much as $5 more. Gold isn’t the only commodity whose “paper price” is a poor reflection of physical reality. 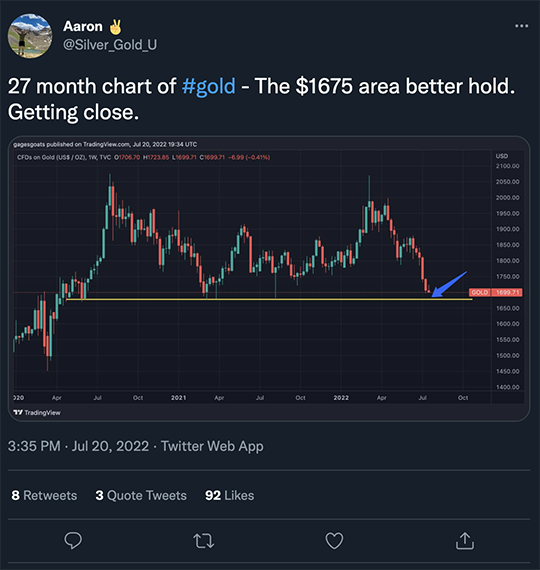 Early this morning the European Central Bank raised its version of the fed funds rate by a half-percentage point. The rate is now zero after spending the last eight years in negative territory. (And you think things are messed up in the United States…) But the dollar index priced in this move days ago; as we write, it’s down only slightly — just under 107.

Crypto is losing ground — perhaps because Tesla disclosed it’s dumped 75% of its Bitcoin holdings, first revealed in February of last year. Elon Musk says it’s nothing against Bitcoin, he just wanted to raise some cash. In any event, Bitcoin is back below $23,000 with Ethereum approaching $1,500.

Energy shortages have taken down a major European leader — not that the mainstream will acknowledge cause and effect.

Draghi’s government started falling apart last week when a split emerged in one of the coalition parties, the Five Star Movement.

What the mainstream reported was that several Five Star members bolted from the party. What wasn’t reported — or if it was reported, it was buried — was that the rebel faction objected to sanctions against Russia and the impact they were having on energy supply and prices.

Can’t disrupt that THE WHOLE WORLD IS UNITED AGAINST PUTIN! narrative, can we?

Draghi hung on for a few more days — but when several parties sat out a no-confidence vote yesterday, it was all over. 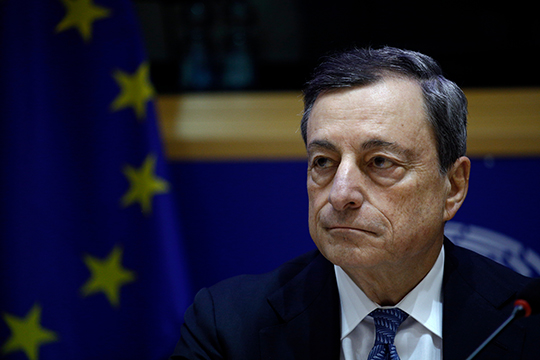 He’s the first European leader to be taken down by energy shortages in 2022, and we suspect he won’t be the last. (Germany’s Olaf Scholz must be quaking in his stiefels.)

Elections were already set for next year, but now they’ll likely be moved up to this October. Whoever comes out on top will have the unenviable task of forming Italy’s 70th — 70th! — post-WWII government.

Nord Stream 1 supplies huge quantities of Russian natural gas to Europe. As we mentioned yesterday, it’s been down for maintenance since a week ago Monday — and many Europeans were shivering at the thought Russia would never reopen it.

Well, it’s open again — but only at 40% capacity. The official explanation is that Russia’s state-owned gas firm Gazprom is still awaiting the return of a turbine being repaired in Canada. What’s more, Vladimir Putin says another turbine is due for service soon.

And so European leaders remain chilled at the prospect of a winter without the Russian gas their people have become so dependent on. 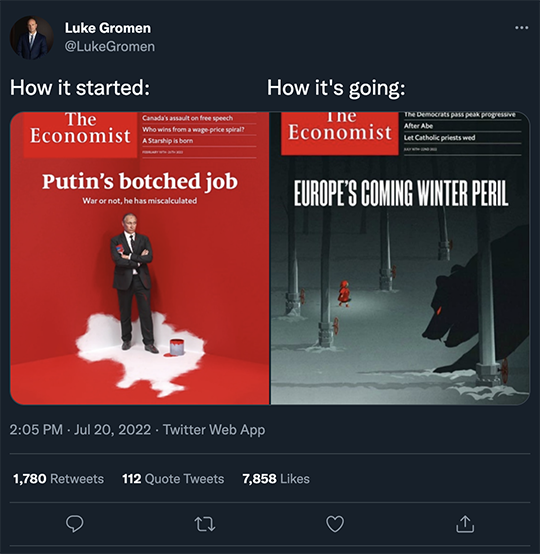 “Russia is using gas as a weapon,” complains European Commission president Ursula von der Leyen. “So let’s act together to reduce gas use and provide a safety net for all EU countries.”

EU member governments are being urged to draw up plans for cutting their countries’ gas consumption by 15%, even if it takes rationing.

To the mailbag, and a reaction to our “cashless society when the internet’s down” scenario…

“In Wednesday’s 5,” a reader writes, “Jim Rickards laments the conundrum of holding too little cash to skirt bank outages versus holding so much that it draws unwanted suspicion.

“Perhaps it’s wise to use crypto ATMs and cash while both are still available to load up non-custodial wallets with no-KYC Bitcoin, Monero and gold-backed stablecoins before the balloon goes up.”

The 5: We like how you’ve thought it through. If you’ve got the courage of your crypto convictions — and ample battery power to keep your hardware wallet functional — go for it.

We don’t want to give away too much about Jim’s “Asset Emancipation” plan, but crypto is not part of it. Nothing against crypto, but if it’s civilizational breakdown we’re looking at, he’d just as soon rely on something that has a longer track record…