We’ll give you the good news first: The price of gasoline was down 7.7% in July, according to the latest consumer price index (CPI) reading.

Per a few mainstream outlets…

The bad news? Ouch! Food was up 1.1% — eggs alone were up 4.3% — and shelter’s up 0.5%. Also up for the month: medical care, motor vehicle insurance, household furnishings and operations, new vehicles and recreation.

But look over here! Gas prices were down; we’ve scored an inflation “reprieve.” (Even though, ironically, “core inflation” — minus food and energy — is no better than it was last month, up 5.9% year over year.)

As for the market’s reaction: INFLATION COOLING… LESS FED TIGHTENING… PARTY ON!

“Wall Street thinks that the worst of the rate hikes are over and that the Fed will begin easing by early next year,” observes Paradigm’s macro expert Jim Rickards. “But will it?”

For some context, Jim says: “The Fed is on an aggressive campaign of interest rate hikes and further monetary tightening through quantitative tightening, QT.

Plus? “The approximately $1 trillion per year reduction in the base money supply (that’s what QT is) is estimated to have the same effect as another 1.0% rate hike.

“Put together, what we are witnessing is tight money on steroids.” Nevertheless…

“This U-turn by the Fed has been referred to as the ‘pivot’ and is one of the reasons the stock market has been rallying in the aftermath of the most recent rate hike on July 27.” On the same day, “Jay Powell lent fuel to the pivot fire at his press conference.

“While eschewing rate forecasts before September, Powell said he thought rates could be about where the ‘dots’ (Fed forecasts) put them by year-end. The dots were showing 3.50% on Dec. 31,” Jim says. “That means another 1.25% in rate hikes.

“There are three remaining Fed meetings this year… You don’t have to be a math genius to see that Powell was implying rate hikes of 0.50% in September, 0.50% in November and 0.25% in December.”

He admits: “The hikes are lower than this past June and July…

“But there’s a serious roadblock in the way of the pivot,” says Jim. “The ‘hot’ July jobs numbers … will give the Fed further justification to continue with aggressive tightening.

“But the Fed figures that if the economy is still adding plenty of jobs even after its recent moves, it can continue to aggressively tighten in order to clamp down on inflation.

“And just because Wall Street wants a rate cut early next year doesn’t mean they’ll get one,” he says. “The Fed is more concerned about inflation than the stock market right now,” Jim says, while forecasting a 0.75% rate hike in September.

“The reality is that the recession is already here,” Jim concludes, despite illusions of an economic soft landing. “The Fed will continue to tighten until the recession grows far worse.

“That will drive stock prices steeply lower from current levels,” he adds. “Jay Powell will pivot, but not until it’s way too late to save stocks.” So… Jim recommends you prepare accordingly.

Then there’s the S&P 500 Index — up almost 2% to 4,200 — reminding us of something Paradigm’s trading legend Alan Knuckman said last week, looking at the S&P’s chart action: “We’re building a solid base here, but we need to be above 4,200 for confirmation” that June marked the bottom at 3,666.

And the festive atmosphere extends to the crypto market where Bitcoin is rallying almost 4%, around $24,000, but Ethereum is the real crypto star today: up almost 8% to $1,830.

“Media outlets are fawning over a prediction from infamous investor Cathie Wood,” warns Paradigm’s retirement-and-income strategist Zach Scheidt. “I want to make sure that her words don’t lure you into a wealth-destruction trap.

“The founder and CEO of the asset management company Ark Invest predicts that growth stocks will lead the market higher,” he says.

Except, effectively, it’s the same self-serving claptrap she’s been spouting for two years, Zach notes. “But even though this broken-record message from Cathie Wood is nothing new, the financial media are eating it up!

“Why?” Zach asks. “Because during the month of July, Cathie Wood’s flagship ARK Innovation ETF (ARKK) was up a whopping 13.2%.

“That’s tremendous, right? Unless you look at the long-term chart of her fund’s performance… 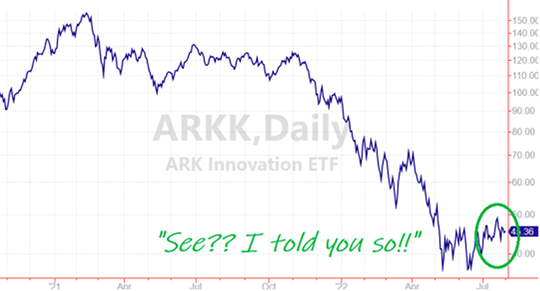 “The green circle on the chart above highlights the 13% gain ARKK investors enjoyed last month,” he emphasizes. “And while 13% sounds like a big number, it hardly makes a dent in the fund’s dismal performance over the last two years.

“Maybe I would be a bit easier on [Wood] if these losses had come from legitimate investments that simply lost value as the economy crumbled,” Zach concedes.

“But at the time ARKK was loading up on speculative tech stocks, these plays were trading at values that any professional should have known were completely unsustainable,” he says. “And her fund continued buying all the way down.”

Zach’s opinion? “Now is the time for value, not growth… After years of taking a back seat to growth stocks, value plays are coming back into focus. And my guess is value stocks still have a long way to run!

“Value stocks are shares of companies that generate real profits,” he says. “And the price investors pay for these stocks is low compared to the earnings they generate.

Apropos of Cathie Wood’s advice then? “They say a broken clock is right twice a day… But that doesn’t mean you should rely on it for useful information.”

At least 11 distillers in nine states have received FDA nastygrams for their pandemic-era “wartime sacrifices.” More specifically, these distillers pitched in when hand sanitizer was in short supply, but after “dealing with the FDA, some distillers are regretting making hand sanitizers at all,” Reason reports.

Distillers including Aaron Bergh of Calwise Spirits in Paso Robles, California, who was a recipient of the FDA’s unwelcome attention. “He assumed that this unexpected detour in the life of his small business was behind him.” If only… 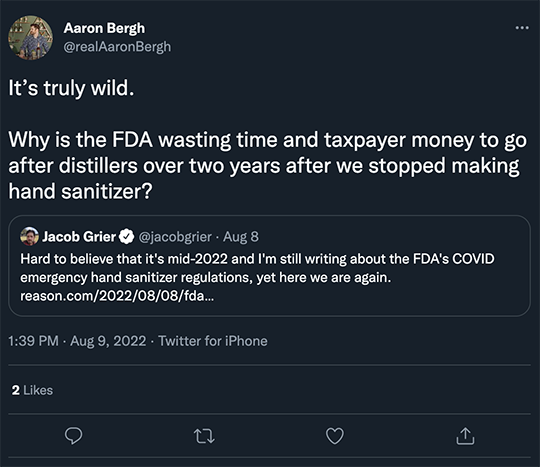 Instead, the FDA sat on a December 2020 hand sanitizer sample for 18 months, only recently informing distillers that levels of acetaldehyde exceeded FDA limits.

Notwithstanding, the FDA itself admits “the exact risk from using hand sanitizer containing” acetaldehyde “is unknown.”

Granted: “There are valid reasons to limit levels of acetaldehyde in hand sanitizer,” says Reason. “The chemical is a potential irritant and is considered a known carcinogen.”

On the other (sanitized) hand, if you’ve ever eaten a piece of fruit or enjoyed an adult beverage, you’ve consumed (and your body has produced) acetaldehyde.

But the unreasonably low FDA standard for the chemical, 50 parts per million, caught kindhearted distillers in a situation they never bargained on, having to hire lawyers to cut through federal red tape — including audits and a $14,000 fee.

“I will not put myself on this same chopping block again,” says Maine-based distiller Jesse Lupo who took out a $45,000 loan to manufacture hand sanitizer… at a slim profit margin.

Proving the point: No good deed goes unpunished? Certainly when dealing with the feds…

“After reading about the Canadian truckers,” a reader writes, “it got me wondering what ever happened to the trucker leadership? Did they get access to their banks back? What about those who were arrested?

“Thanks for another great five minutes!”

A little over three weeks ago, according to the CBC, Freedom Convoy “key figure” Pat King was granted bail after being jailed since February.

“He faces additional charges of obstructing justice and perjury.”

But King’s bail conditions are onerous, to say the least; among the dozen stipulations, we highlight a few…

More stipulations? Mr. King can’t possess firearms… sit for interviews… participate in any COVID-related protests… or have contact with other Freedom Convoy “leaders and stakeholders.”

But first, King was told, in no uncertain terms, to hightail it out of Dodge — or in his case, capital city Ottawa — within 24 hours of release.

Ms. Lich was re-arrested for violating her original bail conditions after having contact with another Freedom Convoy leader at an event. But her lawyer “argued the two organizers did nothing more than shake hands and pose for a photo together,” the CBC reports.

The judge in Ms. Lich’s case set aside the bail violation. However, he tacked on “another $37,000 bond, and tightened rules around communication with the same list of convoy-linked people as last time.”

“It must be crystal clear to you by now that authorities are monitoring your every action,” judge Andrew Goodman scolded Ms. Lich who could be jailed up to 10 years for her non-violent crimes.

As for Freedom Convoy protesters/donors whose bank accounts were frozen via the Emergencies Act on Feb. 15, 2022 — over 200 accounts, by some estimates — Team Trudeau “unfroze” them one week later.

I mean, how else would the Canadian government collect bail money?

Take care… Join us for another episode of The 5 tomorrow.