“With sales of $49.3 billion in 2020, recreational boating is a huge industry,” says our technology authority Ray Blanco, “an industry primed for disruption.

“I got to see that disruption firsthand earlier this year at the Miami International Boat Show, the biggest boating and yachting event in the world, drawing more than 100,000 visitors.

“When I stepped off the dock at the show onto a prototype boat, I stepped onto a floating example of the future of recreational boating,” he says. 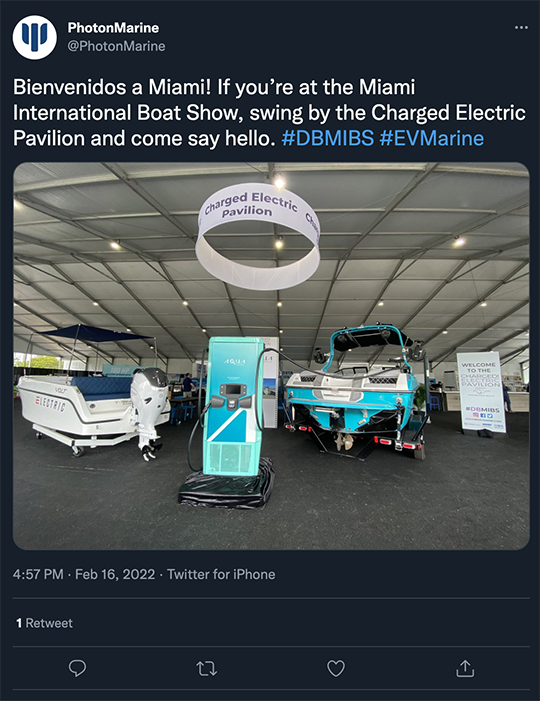 “I experienced a full demonstration of what an electric boat can do.

“The electrification of the recreational boating market — with a high-performance outboard drive — uses battery power rather than gasoline,” says Ray.

“While people have been building electric boat motors for more than 100 years, what no one has been able to do is develop the energy storage technology and software to make a high-performance outboard motor practical.

“Even in the recreational market, we’ve long seen things like low-powered electric trolling motors and even slow-moving all-electric boats.

“But over the years,” he says, “some have tried, and failed, to develop an exciting, high-performance battery electric system. The battery technology and power control technology just haven’t been there.

“But that’s starting to change now…

“Maintenance is a key advantage for electric systems,” he says. “Boaters are well aware of the hassle and expense of maintaining traditional boat powertrains. One running joke is that ‘boat’ is merely an acronym for ‘break out another thousand.’

“The point is simple: It’s expensive to keep a boat in good running condition. However, electric powertrains should enjoy much lower maintenance costs,” says Ray. “Electric systems are much less complex in terms of moving parts than their internal combustion counterparts, meaning there’s a lot less stuff to wear out, break or maintain.

“Fuel efficiency is a big deal as well: Boats don’t get anywhere near the same fuel economy automobiles do. Pushing a boat through the water involves overcoming a lot more friction than pushing a car down the road,” he says. “Moreover, with fuel prices rising and looking to stay elevated for a while, avoiding pain at the pump is a definite plus.

“The same way that electric vehicles are revolutionizing the automobile industry, I expect the same to happen in the recreational boating industry,” says Ray.

But Ray sees an additional advantage over EVs…

“Most recreational boaters don’t use their boats daily,” he says. “It’s more of a weekend activity. So a lot of charging-related worries go away if you’ve got most of the week to recharge at the marina or in your driveway.

“I’m definitely looking forward to what the electrification of recreational boating has in store,” Ray concludes.

Ever since that exhibition in Miami six months ago, Ray’s been waiting for the right investing opportunity to materialize. And just last week, he issued a recommendation to readers of his premium Catalyst Trader advisory.

Catalyst Trader readers are also privy to an up-and-coming biotech player that’s on the verge of cracking the multibillion-dollar market for arthritis treatments. Shares can be had for under $5 — but probably not for long. Click here to check out Ray Blanco’s Catalyst Trader.

Per commodities, oil is down 1.8% to 87.77 for a barrel of West Texas Intermediate. Precious metals are both in the red at the time of writing, with gold down $6 per ounce to $1,792 and silver hanging out just above $20.

The big economic numbers of the day confirm the housing market is turning south— July housing starts dropped 9.6% month over month and 11.9% year over year.

Building permits were marginally better, with the number of new permits edging down 1.3% — less than anticipated — to 1.674 million versus 1.696 million in June.

Regionally speaking, areas of the country with some of the hottest housing markets, namely the South and Midwest, have cooled precipitously, down 21.5% and 23.6% respectively from last year.

And this is unexpected?

According to the Federal Reserve, production at U.S. factories ticked up 0.7% in July for the first time in three months — opposed to the 0.3% economists expected.

Amid the report’s fine print, we learn: “Output of motor vehicles rose 6.6%, the most in four months,” Bloomberg says, while oil and gas drilling increased 3.3%. “The Fed’s report also showed capacity utilization at factories climbed to 79.8% from 79.3%.”

Bloomberg concludes: “Despite firming last month, manufacturing has moderated and risks losing more momentum as businesses contend with an inventory overhang and an easing in domestic demand for goods.” All to say, inflation still looms like a black cloud…

Zach continues: “The government has found a third level of taxing the same profits, leaving even less profit available for investors like you and me.

“As part of this new tax-and-spend bill, the Inflation Reduction Act levies a 1% tax on all share buybacks.

“When a company uses its cash to buy back its shares, the U.S. government will get to take yet another bite out of investors’ profits,” Zach says… as he questions the provision’s legality.

“It boggles the mind that the government will charge companies a tax for being on the other side of this already taxable transaction… This is a stupid tax!”

Even still, Zach is “excited about the short-term opportunity it presents investors… According to my research,” he says, “the new tax on buybacks goes into effect for share repurchases that occur after Dec. 31, 2022.

“Many profitable blue chip companies have huge buyback programs already in place,” he says. “These plans allow companies to spend millions (and often billions) throughout the year buying back shares of stocks, per the board’s discretion.

“At this point, any responsible company should move forward buyback plans, so they can buy back as many shares as possible before the transactions start being taxed.

“Because when a company buys back shares, it reduces the total number of shares outstanding.” Meaning, investors’ shares represent a larger stake in the company.

“And if these programs are accelerated ahead of the Dec. 31 deadline, we could see a huge jump for some of the biggest cash-flush U.S. corporations.

“I’ll be digging through company reports to find the companies that should be buying back the most shares,” Zach says. “But I’ll tell you now, Apple [Nasdaq: AAPL] is by far one of the largest companies that will be affected by this new tax.

“Make sure you’re invested in companies that are actively buying back shares this year,” concludes Zach. “Chances are, you’ll profit as these transactions ramp up.”

A Nevada homebuyer bought an entire subdivision, worth millions of dollars, by mistake.

After closing on one single-family home — valued just under $600,000 and located in the city of Sparks — the office of the Washoe County Assessor spotted a significant error on the title company’s paperwork. 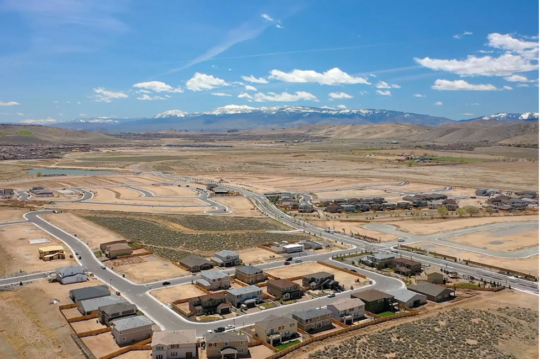 “It appears Westminster Title… may have copied and pasted a legal description from another Toll Brothers transfer when preparing (the homebuyer’s) deed for recordation,” says the county’s Chief Deputy Assessor Cori Burke.

Indeed, a copy-and-paste error transferred 86 properties, including 84 lots and two common areas, to the unwitting homebuyer.

“Correcting the mix-up will require the homebuyer in question to transfer the title back to Toll Brothers,” according to the Reno Gazette Journal.

“Just how easy the process will be is going to depend on how cooperative the… party is.”

“Please consider quoting the price of silver and gold in the prices at APMEX where physical metal is exchanged,” says a savvy reader.

“It is frustrating to see all the financial pages quoting ‘fake paper metal prices’ and then realizing physical (all costs added) is 20–100% higher.

“The true cost of anything is what someone has to pay to get it.

“[Yesterday’s] issue of The 5 Min. Forecast says gold is a little below $1,800. And I challenge you to find gold anywhere at that price.

“If people want something affordable, with anti-counterfeit features, a 1/10 ounce Canadian Maple is $317 credit or about $3,500 per ounce with tax and shipping.

“That’s almost double the $1,800 fake paper spot price for physical gold that most people can actually afford to procure and use.

The 5: That’s a good idea. As we noted during the early days of the pandemic, demand for physical metal was so extreme that the price of real metal in your hand was substantially higher than the “paper” price.

Two-plus years later, that disconnect is still there — and in some cases, like U.S. Silver Eagles, it’s more extreme than ever.

So yes, we’ll take you up on your suggestion — maybe not every day, but at least once a week, just to keep a pulse on real-world physical prices.

And out of shameless self-interest, we’ll quote the prices from our friends at Hard Assets Alliance. As we write this morning, a 1-ounce U.S. Gold Eagle fetches $1,942 while a 1-ounce Canadian Maple Leaf is $1,882.

As we’ve been saying for more than a decade now, Hard Assets Alliance offers some of the lowest premiums in the business.

And in this new era of tight and unpredictable supply, Hard Assets Alliance is battle-tested — tapping into an unparalleled wholesaler network to deliver the metal you want, when you want it. Buying and selling is nearly as easy as it is in your brokerage account. And you have several choices for allocated storage — including overseas vaults in London, Zurich and Singapore. Of course, you can also take delivery if you want to stash your metal yourself.

You can open an account at this link. The usual disclaimer applies: Paradigm Press has an ownership stake in Hard Assets Alliance, so we’ll collect a small cut once you fund your account. But we wouldn’t have partnered with Hard Assets Alliance over the last decade unless we were absolutely certain they’d do right by you. Happy stacking!