Everything Changes on Sept. 15

“Ethereum is about to undergo a monumental transition,” said our crypto evangelist James Altucher in our digital pages almost one month ago.

“It looks like the [Ethereum] merge will finally arrive later this year,” he said, although James couldn’t provide an exact date for this event. Which brings us to our update today…

But before we get to that, we think a little “merge” refresher is in order.

“At its core,” James says, “the merge is a complete redesign of the way that the Ethereum blockchain is maintained and new Ethereum tokens are created.

“[Crypto] mining is an energy-intensive process that requires specialized computers,” he reminds. “This mining process is known as proof of work.

“In proof of work, computers compete to solve a puzzle before any other computer on the network. The first computer to solve the puzzle receives a reward (called the block reward) for its effort.

“The puzzles are designed to be so hard that someone trying to [tamper] with the blockchain would require a massive amount… of energy in order to get away with it.

“However, in the coming months, the Ethereum blockchain will change the way mining occurs.

“This transition,” — the merge — “will replace proof-of-work mining with a new solution called proof of stake,” James says.

“In short, proof of stake (PoS) works by having participants (called validators) put up a deposit to promise they are not lying.

“Based on the size of their deposit, each validator gets a corresponding vote on the true version of the latest blockchain record. [Validators] earn a yield on their deposit (or stake) to further incentivize them to participate.

“Because they are not burning energy — numerous studies have found that Ethereum will use 99% less energy after the merge — the cost for participating will be much lower.”

Which pretty much brings us up to speed…

“The timetable for the monumental Ethereum (ETH) merge to a proof-of-stake system is moving up by four days,” says an article at The Daily Hodl.

“According to Ansgar Dietrichs, a researcher at the Ethereum Foundation… ‘The Merge’ date is now scheduled for Sept. 15. 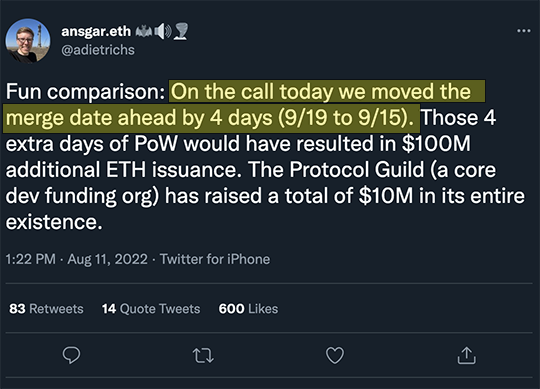 “The highly anticipated event will allow Ethereum’s mainnet to merge with its Beacon Chain, which already runs the proof-of-stake system,” the article notes.

“The stakes are high,” James concedes. “Pulling off a major system change on the second-largest blockchain in the world is a bit like changing an airplane engine midflight.”

Nonetheless, “investors [could] benefit massively,” he believes, especially as “mainstream investors and Wall Street appear to be sleeping through this opportunity.”

First, because miners consume so much energy, many miners must sell a portion of their Ethereum to cover their energy bills. “Some experts believe miners are responsible for nearly $10–⁠20 million in Ethereum sales every day,” James says.

“This reduction in selling pressure could cause Ethereum to reach $6,000 within the next 12 months.” (Plus, investors reluctant to participate in crypto because of its environmental impact might get off the crypto sidelines.)

Then there’s this: “The merge will actually make Ethereum deflationary…

“Following the merge, experts forecast that Ethereum will be destroying more currency than is created,” James says, “meaning that approximately 1–⁠2% of all Ethereum tokens will be destroyed every year.”

So unlike the money-printing freaks at the Fed, “over time, this will serve to reduce the total supply of Ethereum,” which “should also meaningfully improve the price from today’s current levels,” says James.

“Given the current investment environment in stocks and bonds,” he says, “a deflationary cryptocurrency could renew interest in the asset as a store of value in an otherwise volatile market.

“Long term, it’s hard to believe that Ethereum won’t be a great investment,” James closes. “With the merge right around the corner, I’m betting Ethereum could pay off big in the short term as well.

“From an opportunity-cost perspective, I think it’s better to spread my crypto investments around to Ethereum and other Ethereum-powered coins,” he adds.

If you’re interested in learning how to use the same strategy, view James’ “Next Generation Crypto Summit” right here… optimally before the Sept. 15 merge date.

The mainstream financial media can’t make up its mind about the release of the latest Fed minutes yesterday.

According to Jim Bianco of Bianco Research: “The minutes were perceived to be dovish… And on the wake of this, the probability of a 75-basis-point hike in September slumped back to 41%.”

For the major economic number of the day, factory activity in the mid-Atlantic expanded in August. The Philadelphia Fed manufacturing index turned positive this month to 6.2 from minus 12.3 in July. New orders, however, remain in negative territory at minus 5.1, up from minus 24.8 last month.

“White House policy is clear,” says our macro pro Jim Rickards, “if you don’t like the economic news, just change [data] to get whatever result you want.”

For context, at a press briefing on Aug. 10, President Biden said: “Today, we received news that our economy had 0% inflation in the month of July. Zero percent.

“But people are hurting,” Biden admitted (cue the sad clown). “But zero inflation last month,” he crowed (turn that frown upside down)!

“In a desperate move to hide bad news,” Jim says, “the White House [used] a month-to-month comparison instead of the customary year over year.”

Jim observes: “Inflation may be down a bit from its peak, but it’s still outrageously high, no matter what kind of spin the White House may put on it.”

Along those same lines — massaging the numbers — Jim highlights a very misleading headline at Reuters: “Germany Reaches 75% Gas Stocks Target Ahead of Schedule.”

(The entire headline is a hack job, really. What’s meant by “gas stocks”? Alas, in this instance, the article’s headline refers to Germany’s natural gas reserves.)

“This sounds like good news,” Jim continues. “We all know that Germany is facing serious shortages in natural gas.” This after the country’s main natgas supplier, Russia, throttled Europe’s central conduit — the Nord Stream 1 pipeline — in mid-June.

Moscow blames “faulty and delayed equipment,” — riiiight — “while Europe says the move has been politically motivated,” Reuters reports. (Which, you know, is to be expected when you attempt to sanction a country’s economy to death.)

So forget Germany’s “target” mentioned in the headline: That’s a distraction, as well as an abstraction.

All to say, Germany has stored just a little over one-fifth of the natural gas the country used last year… And it’s Aug. 18! “Germany is facing a crisis [that] could emerge when the winter weather hits,” Jim says.

For more on Germany’s energy crisis…

“Germany’s last three nuclear power plants were scheduled to shut down this year,” says an article at Reason, “but… the German government has decided to keep them open for now.”

It’s a “belated outburst of rationality,” Reason says, even though nuclear power accounted for just 6% of the country’s energy consumption last year — down from 11% in 2009. 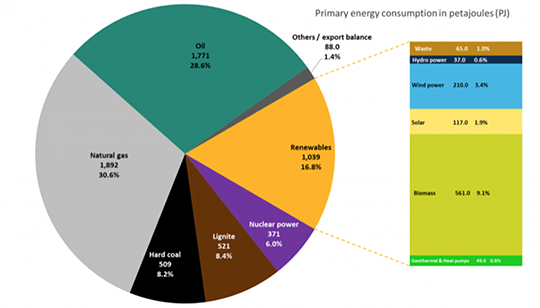 In fact, before 2010, Germany had 17 nuclear power plants operating. “However, in a panicked overreaction to the Fukushima nuclear meltdowns in 2011, the German government decided to close all of them down… Leaving the country dependent on Russian natural gas.”

Jim Rickards comments: “There’s a lesson here about not over-relying on a single supplier of critical resources… and about not picking a political fight with that supplier.” Yeah, word.

Leave it to San Francisco officials to insist on bespoke city trash cans, costing taxpayers an arm and a leg.

“San Francisco began its search for the perfect trash can in 2018 when officials decided it was time to replace the more than 3,000 public bins that have been on the streets for almost 20 years,” the AP says.

Here’s what an industrial firm has come up with… 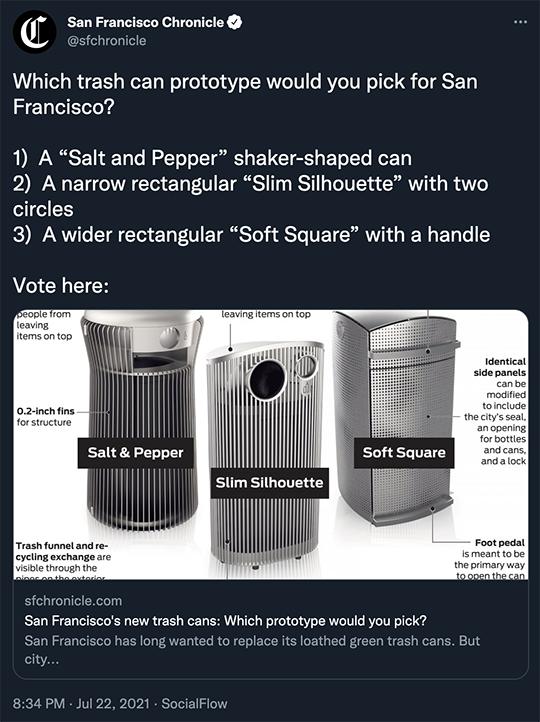 According to Reason: “They’re now stationed around San Francisco, and residents may scan a QR code on the cans to offer the city feedback via an eight-item questionnaire.”

“We need to have a trash can that works for the city of San Francisco,” says city project manager Lisa Zhuo. “If this trash can is able to perform the way it’s designed, it’s going to save us in the long term.”

Oh, for the love…

Voice of reason and former SF supervisor Matt Haney asked last year: “Why are we still doing this rather than putting out a bunch of different types of cans that already are produced, that are much cheaper, that are already performing well?”

But city officials have already spent almost a half-million dollars on the project — something about sunk costs? — so there’s no going back now.

You all take care, and we’ll be back with more of The 5 tomorrow.