Of all the missed warnings before the Sept. 11 attacks, some of the most compelling — and to this day, least publicized — were the financial warnings.

The attacks took place on a Tuesday morning. The previous Thursday and Friday, something funky was going down in the options markets.

There was no news to trigger that sort of action. And there was no similar action in the other airlines like Southwest or US Airways — whose jets were not involved in the attacks.

“Seasoned traders and sophisticated computer programs recognize this pattern for what it is,” Jim wrote — “insider trading in advance of adverse news. Only the terrorists themselves and their social network knew that the news would be the most deadly terrorist attack in U.S. history.”

The 9/11 Commission dodged the issue, saying the feds uncovered “no evidence” anyone with advance knowledge of the attacks profited.

Still, a small office within the CIA decided to dig deeper… and Jim Rickards was among nearly 200 finance pros called on to assist the effort during 2003.

Their mission: To identify market activity that would tip off another big attack.

“We had modeled terrorist trading from start to finish,” Jim wrote, “anticipating that the insider traders would be not the terrorists themselves but rather members of the terrorist social network. We also concluded the insider trade was likely to be executed in the options market less than 72 hours before the attack to minimize the risk of detection.”

Sixteen years ago this month — on Aug. 7, 2006 — Jim and his colleagues spotted just this sort of activity. Once again, it was concentrated in American Airlines.

As it happened, Scotland Yard was in the process of thwarting a plot to blow up seven airliners traveling between Great Britain and North America. By the night of Aug. 9, police in and around London were able to pick up 24 suspects in a series of raids.

“We realized that the plot was unfolding in exactly the time frame that our behavioral modeling had estimated.”

And yet… the CIA wound up pulling the plug on the project. As Jim tells us, the agency was concerned about public perception that the feds were combing through U.S. citizens’ personal trading records. That’s even though the system relied only on “open source” (publicly available) information to generate leads; if the leads needed following up, that had to go through the court system.

➢Bonus points for government stupidity: It was this August 2006 incident that’s cursed us ever since with the TSA’s arbitrary and pointless 3.4-ounce limit on liquids and gels in your carry-on luggage.

While the CIA ignored all the lessons from this exercise, its predictive power has stuck with Jim ever since.

“I learned that the techniques I developed were useful far beyond the realm of counterterrorism… If you know where to look and how to examine the history and data, much can be learned about the future movements of financial markets. A lot of this information can be gleaned by the actions of insiders who have special information everyday investors don’t.”

In short, the tools he helped to perfect “can detect these insider actions, giving everyday investors the same advantage insiders have.”

It’s taken over a decade… but Jim has taken the insights from these tools and spun up a system that can help you identify stocks that are — and here’s the twist — on the verge of rallying. (Even in a volatile market like 2022.)

With that in mind, Jim is convening an online event called the Insider Fortunes Summit. It’s set for this Thursday Aug. 25 at 2:00 p.m. EDT.

While Jim’s typical one-day speaking fee is $25,000… you can look in on this event absolutely FREE. Registration is as simple as can be — one click on this link and you’re automatically in.

For no obvious reason, the stock market is stumbling as a new week begins.

It’s not surprising, a pullback like this after a 17% rally over two months. But of course, that’s not good enough for financial media, which are twisting themselves in a pretzel this morning about Fed policy.

The Wall Street Journal serves up as good an example as any: “… as investors worried about further rate increases.” As if that prospect hasn’t been hanging over us this whole time? Gawd, and they’re gonna do this all week in advance of chairman Jerome Powell’s big annual speech in Jackson Hole, Wyoming, on Friday.

Bonds are selling off along with stocks, pushing rates higher: The yield on a 10-year Treasury note is back above 3% for the first time in over a month. Gold is also selling off, down to $1,736. (Silver is steady, a little over $19.) Crude has pulled back 77 cents to $90 on the nose.

Once more, the weekend action in crypto presaged the Monday sell-off in stocks: Bitcoin is down to $21,353, Ethereum below $1,600.

The big economic number of the day does not point to a recession — not yet, anyway.

The Chicago Fed National Activity Index crunches 85 economic indicators. Over more than 50 years, it has a near-flawless record in anticipating recessions. (It was caught flat-footed by the 1973 oil shock and the 2020 corona-shock.)

If the three-month moving average is minus 0.7 or below, a recession is in the bag. But the July reading comes in at minus 0.09.

➢ That said, a recession is happening right now for 3,000 white-collar and contract workers who are about to be let go at Ford. On the heels of the 870 jobs at Wayfair on Friday, we really could make layoffs and hiring freezes a daily feature here.

If it’s truly dire economic developments you’re looking for, go to China: The central bank just cut mortgage rates in an attempt to shore up the flailing real estate industry.

Meanwhile, manufacturers in Sichuan province tell the BBC that a drought has prompted power cuts that are disrupting production. Volkswagen’s factory in Chengdu is shut down altogether.

In Shanghai, tight electricity supply is prompting the meaningless symbolic gesture of a two-day pause to the nighttime lighting of the skyline known as the Bund… 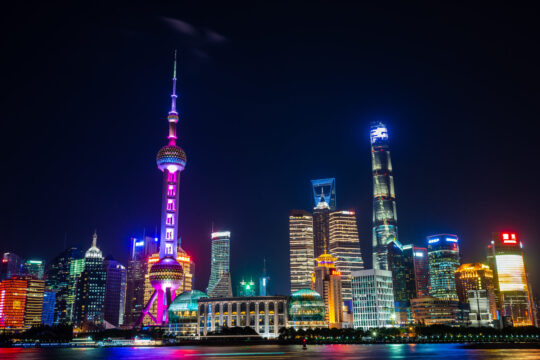 Back in Sichuan, Apple supplier Foxconn says the disruption to its operations is “not significant.” Of course, it’ll say that now that Apple has moved up the rollout of the iPhone 14 by a week — it’s set for the Wednesday after Labor Day.

“Since peaking in June, many of these stocks have done a great job holding their ground.” And Zach believes the current consolidation is setting up the next rip higher, for three reasons… 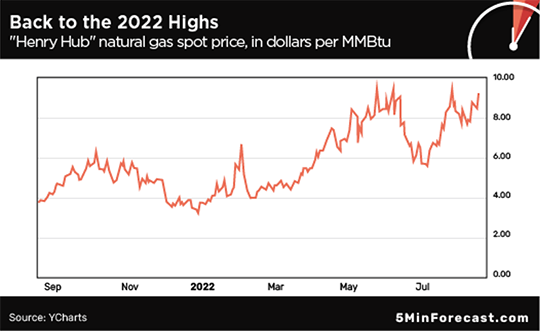 “This fund gives you exposure to a wide variety of oil and natural gas producers and should trade sharply higher in today’s environment.”

A bull in a china shop is one thing… but in a bank? (Check out the skid on the security camera here!) 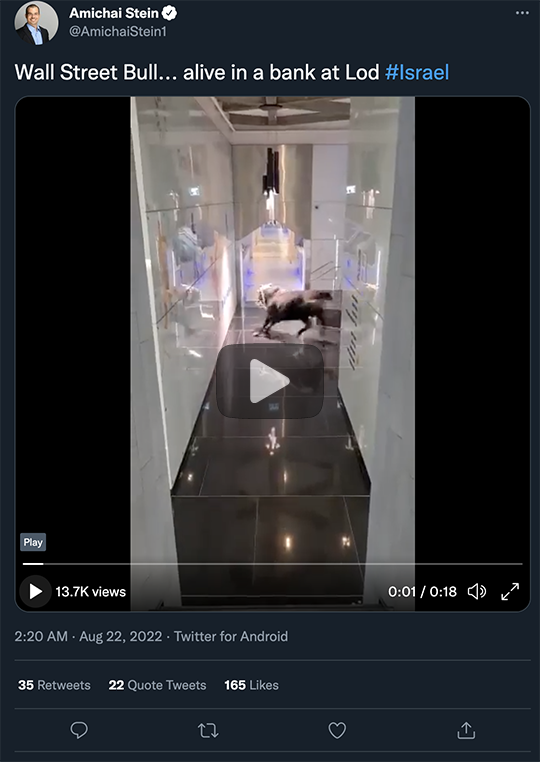 “Employees of an Israeli bank were sent fleeing down corridors on Monday as a bull charged through the building,” reports the AFP newswire. “The bull, with a rope trailing from its neck, hurtled past parked cars before entering the bank, provoking panic among employees.”

According to The Jerusalem Post, “The bull was eventually caught by Israel Police officers who shot it with a tranquilizer dart. Local authorities tracked down the owner who then tied up his bull.”

We’ve pored over at least three stories in the English-language Israeli press and none of them explained either how the bull got loose, or what he was doing there in the first place. Hey, we tried…

“I would like to know where Sleepy Joe and company expect to find 87,000 additional qualified IRS agents,” a reader writes.

“I think the new agents should practice by auditing the president, vice president and all congressmen and senators. That should keep them out of everybody else’s hair for a few years.”

The 5: Amid a labor shortage, you raise a good point.