More than 200 Chinese companies listed on U.S. exchanges just got a reprieve from the death penalty.

They were in danger of being de-listed starting in early 2024. U.S. regulators were demanding access to the companies’ books, to see whether they were in compliance with U.S. accounting standards.

“For years,” says The Wall Street Journal, “regulators in China were reluctant to allow such inspections, and argued that unfettered access to companies’ audit papers and their data could threaten the country’s national security.”

This morning, negotiators from both Washington and Beijing announced they’d come to terms.

The deal was done today, but word leaked to the Journal yesterday morning — setting off a frenzy in U.S.-listed Chinese stocks.

That was especially the case for Chinese tech giants that were in danger of getting booted off U.S. exchanges.

Options in those companies performed far better. Folks holding Alibaba calls expiring next month were sitting on an instant 300% gain.

It’s a sure thing some of those folks knew the deal was done before the news leaked — and they positioned themselves accordingly.

This is exactly the sort of market activity that Jim Rickards’ new I-3 trading algorithm can sniff out in advance — so that everyday folks like yourself can also take advantage.

Now, as it happens, we rolled out Jim’s new premium advisory — Rickards’ Insider Intel — yesterday afternoon, just hours after the news broke. Alas, it was too late for readers to act on what the insiders knew in advance of the Journal’s scoop.

But going forward, it’s this kind of development that Rickards’ Insider Intel is designed to capitalize on. And the next trade recommendation is due next Wednesday. Click here and Jim will explain how his I-3 algorithm can give you a leg up for big and timely gains.

Back to the agreement and how it came together.

Under the Holding Foreign Companies Accountable Act of 2020, the feds took aim at diffident Beijing, requiring compliance with federal auditors — appointed by the SEC — aka the Public Company Accounting Oversight Board (PCAOB).

(Just for kicks: A key provision of the legislation is that companies certify “they are not owned or controlled by a foreign government.” Because… China?)

If China failed to acquiesce, according to the SEC’s website: “After three consecutive years… trading in the securities of that company in the United States will be prohibited.”

The WSJ notes: “Since the HFCAA took effect, authorities in China have expressed a desire to find a way to comply with the law.”

Heh… How do you say “uncle” in Chinese?

Now the PCAOB gloats that it has “sole discretion to select the firms, audit engagements and potential violations it inspects and investigates — without consultation with, nor input from, Chinese authorities.”

So if all goes according to plan, Chinese corporate books will be made available to U.S. federal auditors in semiautonomous Hong Kong. “We have teams ready, bags packed and ready to go,” says chair of the PCAOB Erica Williams, “so that we can actually test out that agreement and make sure that what we have in the agreement on paper is actually working in practice.”

And this is rich…

“The decision marks a major thaw in U.S.-China business relations,” Reuters concludes, “and will be a huge relief for hundreds of Chinese companies and investors [hoping] to retain access to the world’s deepest capital markets.”

Umm, we question a relational thaw between the two countries, as for relief, no doubt. 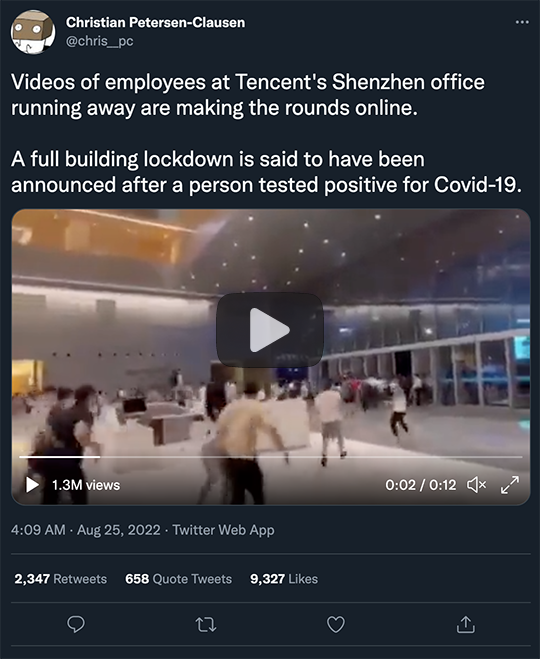 Yes, Tencent was on the PCAOB’s watchlist too.

Wall Street is throwing a fit after the uber-hyped “Jackson Hole speech.”

He said the Fed will “keep at it” with raising short-term interest rates and reducing the Fed’s balance sheet. Battling inflation, he said, remains the top priority — and if economic pain is the result, so be it.

If Wall Street was looking for hints of another “Powell pivot” from tight to loose monetary policy — like the one he performed in early 2019 — there was no evidence of it here.

But why should Mr. Market be surprised? Ninety minutes before Powell opened his yap, the Commerce Department issued the Fed’s favorite measure of inflation.

“Core personal consumption expenditures” rose 4.6% year over year in July. Yes, that’s down a bit from the previous month’s 4.8%, but it’s still near a four-decade high.

➢ Apart from the Fed, the other big market story today is Moderna suing Pfizer for allegedly copying Moderna’s patented technology that went into COVID-19 vaccines. The news is doing nothing for either company’s share price — PFE is down 1.3% and MRNA is down 2.5%.

“Europe’s soaring energy bills are triggering a wave of shutdowns,” says an article at Politico.

Most notably today, shutdowns at fertilizer plants are “causing disruption for farmers, food manufacturers and — to the horror of bar owners everywhere — brewers of beer.” 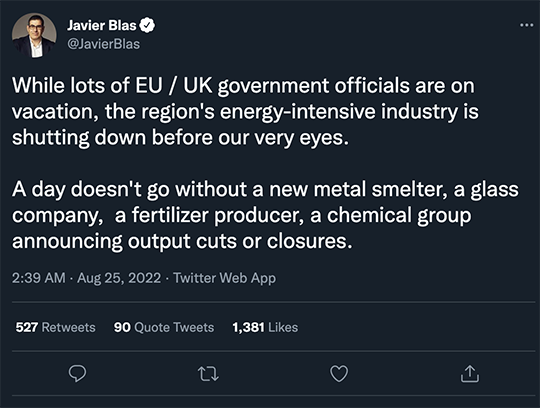 “On Thursday, the world’s largest fertilizer company Yara, based in Norway, announced a 50% cut to its ammonia-based urea and nitrogen fertilizer production in Europe, citing ‘record high prices,’” Politico notes.

This on the heels of Britain’s largest fertilizer company, CF Fertilisers UK, announcing less than 24 hours earlier that it would “temporarily halt” production at one of its plants. And two other major fertilizer companies — this time in Poland — likewise announced “paused” operations this week.

“Fertilizer is not only vital for boosting crop soil fertility,” the article continues, “but its production creates a byproduct, CO2 gas, which is used to add fizz to beer and soft drinks.”

“Few people realize that carbon dioxide is a byproduct of fertilizer making,” says Beata Ptaszyńska-Jedynak of brewing company Carlsberg Polska. “And it cannot be stored for a very long time, so we only have a few days’ worth of reserves left.” We can’t even be snarky today.

And *sigh* for another looming shortage…

According to researchers at University College London: “Sulfur in the form of sulfuric acid is a crucial part of our modern industrial society. It is required for the production of phosphorus fertilizer and manufacturing lightweight electric motors and high-performance lithium-ion batteries…

“Rapid growth in the green economy and intensive agriculture could see demand increase to over 400 million tonnes by 2040,” the study adds, comparing that figure with the roughly 250 million tonnes of sulfuric acid used annually.

But here’s the rub: “Today over 80% of the global sulfur supply comes from desulfurization of fossil fuels to reduce emissions of sulfur dioxide (SO2) gas.”

“Decarbonization of the global economy to deal with climate change will greatly reduce the production of fossil fuels,” the study notes.

“This will create a shortfall in the annual supply of sulfuric acid of 100–⁠320 million tonnes by 2040, depending on how quickly decarbonization occurs.”

The researchers conclude: “Our concern is that the dwindling supply could lead to a transition period when green tech outbids the fertilizer industry for the limited more expensive sulfur supply, creating an issue with food production, particularly in developing countries.”

A new slogan for Texas? Don’t egress to Texas… 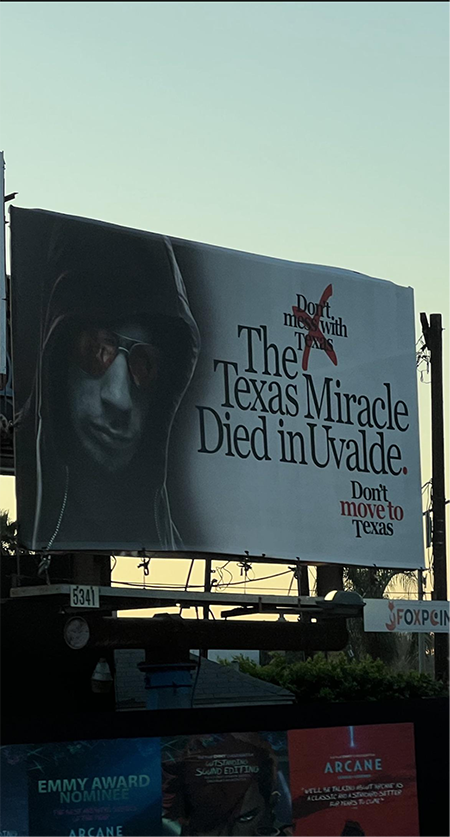 The so-called “Texas miracle” — we’ll get to its origin story in a second — has been on the receiving end of the “California Exodus,” wherein the Golden State lost 352,000 residents between April 2020 and January 2022, per the Los Angeles Times.

“According to a study by the Texas Real Estate Research Center, one in every 10 Texas transplants is from California,” the New York Post says.

“Last spring, California lost a House seat as its population declined relative to other states, while Texas gained two.”

As for the origins of the “Texas miracle,” The Atlantic says: “Back in 2008, Texas experienced muted effects during the recession, and during the recovery, faster-than-average job creation. This economic boon was deemed a ‘Texas miracle.’”

Not anymore, according to the billboard’s anonymous sponsors, and the message is clear: If you’re planning a move, expecting some Texas Shangri-La, don’t.

But perhaps the billboards are just another shot fired in a pissing match between Govs. Newsom (D-CA) and Abbott (R-TX). In late July, Newsom bought ad space in three Texas newspapers, calling out Abbott’s views on gun control and abortion.

Are the billboards a little tit-for-tat from Abbott?

On second thought, Newsom himself has good reason to staunch the outflow of Cali taxpayers… Or even Pelosi? We understand she has some spare change lying around.

You all take care this weekend… And be sure to check out Saturday’s issue about the “most important” sanction against Russia.