“A Blunder From the Start”

Blowback From Western Economic Warfare, Part 1: Sanctions notwithstanding, the United States has imported more than $1 billion in Russian goods every month since Russia invaded Ukraine.

After sifting through the numbers, The Associated Press finds that “more than 3,600 shipments of wood, metals, rubber and other goods have arrived at U.S. ports from Russia since it began launching missiles and airstrikes into its neighbor in February.”

Granted, that’s down 40% from a year earlier… but it doesn’t exactly fit the narrative about “crippling” Russia.

Turns out Russia makes certain things no one else really can: “Russia’s dense birch forests create such hard, strong timber that most American wooden classroom furniture, and much home flooring, is made from it.”

There’s nothing “confounding” about it. Paradigm Press’ own Jim Rickards said this would happen at the outset of the war. And now the Journal affirms that higher oil prices are putting more revenue in Moscow’s pocket than before the war began.

“Even with the dip in oil exports, Russia has earned $20 billion in average monthly sales this year compared with a $14.6 billion monthly average in 2021, when economies were recovering from the pandemic crash. Shipments were rising again in August, data from ship-tracking firm Vortexa show…

Yep, China and India are happy to take the oil that European and American leaders are turning away. Imagine that!

Blowback From Western Economic Warfare, Part 3: Leaders of as many as 16 countries are looking to join the BRICS group.

As you might know, BRICS already comprises Brazil, Russia, India, China and South Africa. None of these countries is on board with Western sanctions targeting Russia, never mind the bleating of Western leaders about how “the whole world” is united.

Argentina and Iran have applied for membership — a process that could wrap up as early as next month. Next in line is a motley crew including long-standing American client states like Egypt and Saudi Arabia.

“This would consist of new digital currencies backed by a basket of commodities that includes gold.”

No, that’s not a this-year thing or even a next-year thing. But it’s coming.

Bear in mind what we said yesterday about how natural gas is becoming a globally traded commodity like oil — no longer “stranded” on the continent where the wellhead is located.

“This new organization could function like OPEC,” explains Jim Rickards, “except that the strategic asset would be natural gas rather than oil.

“Other countries that could join this new cartel include Qatar and Azerbaijan. Russia, Iran and Qatar alone control about 60% of the world’s natural gas reserves. Such a cartel would be able to strike exclusive deals with favored buyers like China, which would leave Europe out in the cold, literally and figuratively.”

Oh, and make American natural gas that much more costly for American customers.

“The U.S. sanctions were a blunder from the start,” Jim concludes.

“Now the unforeseen consequences are emerging and they’re even worse than the critics imagined.

“Biden pursues his fantasies of windmills and solar modules while serious countries like Russia and Iran gain a lock on the only energy supplies that really matter — oil and gas.”

[Ed. note: We don’t want to do a disservice to charter subscribers of Jim Rickards’ Insider Intel… but we can tell you select players in the energy space are starting to turn up on Jim’s exclusive I-3 algorithm — a predictive tool that emerged from his work with the CIA in the early 2000s.

After years of development, Jim has finally rolled out a version of this system suitable for retail investors — with the potential for gains of 2,700% in 43 days or 1,300% in only 24 hours.

For a limited time, you too can still get the charter-subscriber rate. Follow this link to learn how the I-3 algorithm can deliver huge gains no matter what’s happening in the broad market.]

Another day, another drop for the major U.S. stock indexes.

Bonds are selling off, pushing yields higher. The 10-year Treasury is up to 3.13%, a two-month high.

For the record: A nationwide freight rail strike might be averted. (Who says it’s all bad news around here?)

Last month, 12 rail unions representing 115,000 workers were on the verge of walking out, threatening to make the supply-chain snags worse by an order of magnitude. President Biden named a Presidential Emergency Board to begin arbitration.

Three of the 12 unions, representing 15,000 workers at carriers including BNSF and Union Pacific, have now come to terms. The other nine unions face a mid-September deadline.

Health care now takes up an alarming 34.6% of the entire federal budget.

That turns up in the fine print of the Treasury Department’s latest monthly budget report. With two months remaining in fiscal 2022, Uncle Sam spent a total of $4.831 trillion… of which $1.669 trillion went for health care. 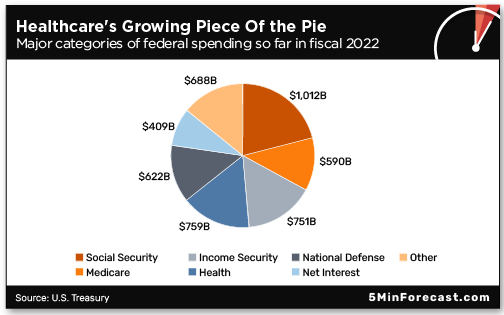 But that’s not the totality of federal health care spending. There’s a chunk of “Other” that’s also devoted to health care. Add it all up and you see the actual total in the fine print of the report as the line item for the Center for Medicare and Medicaid services — the aforementioned $1.669 trillion.

Which means we’re right on schedule for something to break in the system this decade — catastrophically.

So here we are in 2022 at 34.6%… on our way to 50% by 2030. Except we’ll never get there — because as we’ve observed periodically over the years, something in the system will break long before health care spending eats up half the federal budget.

That’s even more true now with American war commitments to Ukraine and Taiwan… and rising interest rates making debt service more of a burden as well.

With the “paper price” of silver sinking toward $18, the price of physical metal remains much higher — and U.S. Silver Eagles the highest of all.

That’s a 76% premium over spot — and again, Hard Assets Alliance has among the lowest premiums in the business.

The U.S. Mint has been unable to meet demand since lockdown hit 2½ years ago. Depending on the day, it’s cited a shortage of silver blanks and/or plant capacity limits.

Among the questions he’d like answered: “Why is only a single supplier currently allowed to (or willing to) provide the U.S. Mint with silver blanks for its Silver Eagle program?” He also wonders whether the Mint has examined the “relative success” of Canada and Austria in meeting demand for their respective silver coins.

We’re not holding our breath — but if Mooney gets a meaningful reply, we’ll pass it along…

Because New York state has apparently solved all its other problems… 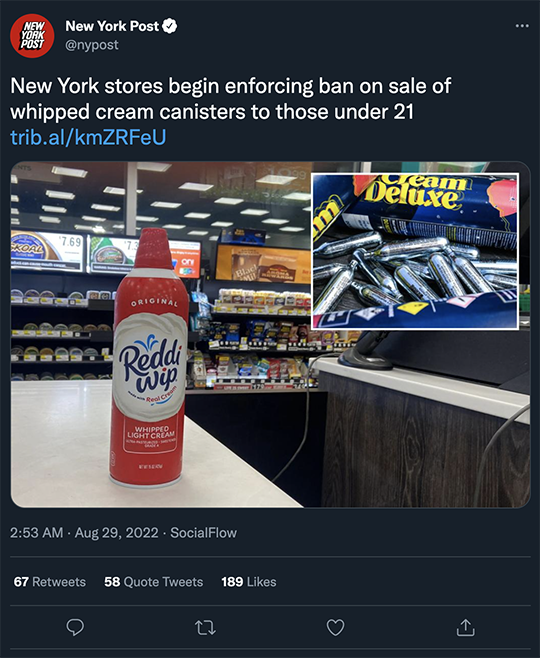 “Be prepared to show your ID at the grocery checkout if you want to buy whipped cream in a canister,” warns the Albany Times Union.

A law requiring ID took effect last November, but widespread enforcement is coming into effect only now. Violating retailers face a fine of $250 for the first offense, and $500 for each additional one.

The rationale? “The chargers that propel whipped cream through a canister nozzle are filled with nitrous oxide gas, which can be inhaled to produce a high. The inhalant has long been a popular recreational drug — called ‘whippets’ — among teenagers due to the availability of whipped cream canisters at grocery and convenience stores.”

Is teen use of “whippets” even a major problem? “According to a 2015 study from the Substance Abuse and Mental Health Services Administration,” writes Emma Camp at Reason, “only 0.4% of 12–17-year-olds reported having done whippits in the past year.”

Thus, “It is unclear how much this bill will impact whippit use. The small number of teenagers who actually want to get high off nitrous oxide will probably just purchase other household items that contain nitrous oxide canisters, such as sprayable cooking oil.”

Yes, but it’ll make the politicians behind the law feel virtuous. That’s all that really matters, right?