Stocks have had a lousy run since last Friday. So has cryptocurrency. It is not a coincidence.

Bitcoin sits a hair below $20,000 as we write this morning, Ethereum near $1,560. Both are down big-time from last Friday — just like the stock market.

Earlier this year, we weren’t sure whether there was anything to the parallel action in stocks and crypto. But by now, it’s unmistakable. The Nasdaq peaked last November and so did Bitcoin. Stocks bottomed in June, only to start giving back their gains a couple of weeks ago. Ditto crypto.

The most plausible theory we’ve seen is that by now, crypto has attracted just enough attention from deep-pocketed institutional investors. They think and act as a herd, and they treat crypto as a “risk asset” along with stocks. When they get skittish and unload stocks, they unload crypto too.

If you’re someone who believes in the power of crypto to change the world for the better, this phenomenon is mighty depressing.

On one of our recent Wednesday conference calls, I asked our top crypto analyst Chris Campbell: “When does this change? When does crypto ‘decouple’ and start behaving again as a unique asset class?”

If you’re hoping the answer is, “As soon as the big Ethereum ‘merge’ takes place in mid-September,” we’re afraid you’ll be disappointed. In fact, Chris thinks ETH might stumble for a bit before regaining its footing.

His realistic answer: Crypto will decouple when it achieves wider adoption for real-world purposes, supplanting the channels of traditional finance.

“A lot of people say that crypto has solved no real problems yet. That it’s all about hope and speculation,” acknowledges Paradigm Press’ crypto evangelist James Altucher.

James could go on, but you get the idea. Crypto already has a multitude of real-world uses.

So back to the question: When will crypto prices in U.S. dollars break away from the prices of stocks?

James figures the time will arrive when crypto achieves 1 billion users. As he explains it, the internet reached critical mass in 2005 when web usage crossed the 1 billion-user mark — and that marked “liftoff” for many internet-related companies.

Right now, crypto is only about a third of the way there. But James sees the trajectory accelerating dramatically going into 2023.

And when that happens, look out.

If you have a long-term mindset… if you’re willing to exercise some patience… there’s no better time than now to get your start in crypto. Buying after an 80% crash? That’s about as ideal an entry point as any.

And James has his eye on one crypto with the potential for 8,788% gains by 2025 — as he explains when you click and watch this brand-new presentation.

To the more traditional markets, where one of the big movers of the day compels us to rant…

The chipmaker Nvidia is down nearly 9% as we write. After the close yesterday, NVDA said it was under orders from the U.S. government to first obtain a license before exporting its A100 and H100 chips to China — chips made to speed machine learning tasks.

Asked by the media to explain the new requirements, the Commerce Department replied that it’s “not in a position to outline specific policy changes at this time.” But the agency did say it’s taking a “comprehensive approach” to “preventing China’s acquisition and use of U.S. technology in the context of its military-civil fusion program to fuel its military modernization efforts, conduct human rights abuses and enable other malign activities.”

Nvidia stands to lose about $400 million in quarterly sales — about 6.8% of its revenue forecast for the current quarter.

The great thing about being the government nowadays is you don’t have to explain anything, even when it has a material effect on the fortunes of a company whose market cap ranks in the top 10.

It’s the same mindset that was behind vaccine mandates. “Don’t ask why, shut up and comply.”

Remind us again why conducting commerce is so much better in America than it is in China and Russia because we supposedly have the rule of law?

Anyway, the stock market as a whole is also in the red today — for a fifth consecutive trading day. 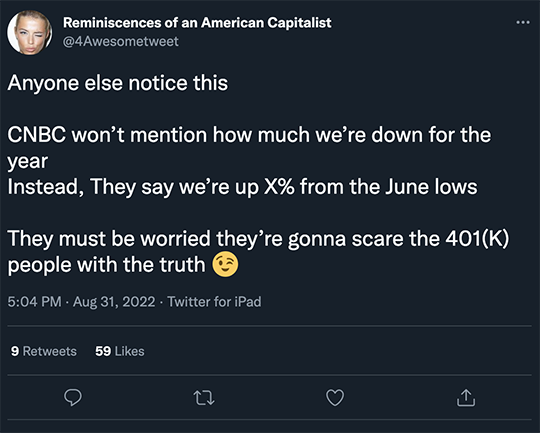 Alas, it’s another one of those nowhere-to-hide days: Bond prices are getting clobbered, pushing rates higher: The 10-year Treasury note is up to 3.27%, the highest since June 21.

Crude sits at $87.47 — down nearly nine bucks in three days. The mainstream chalks it up to “renewed recession fears,” but the head of the world’s biggest oil hedge fund is calling BS… 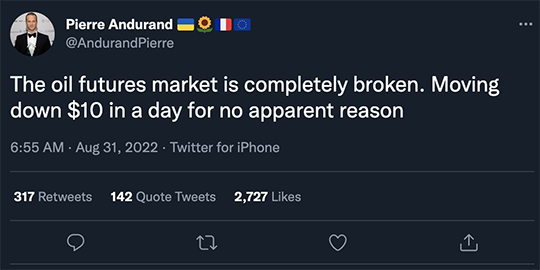 Yep. As we mentioned in July, there’s an increasing disconnect between the “paper price” of crude and the price of actual barrels for delivery.

The big economic number of the day came in better than expected: The August ISM Manufacturing Index registers 52.8, comfortably above the 50 dividing line between a growing factory sector and a shrinking one. That said, the number is the lowest since June 2020.

The industrial powerhouse of Europe is slowly powering down.

“German manufacturers are halting production in response to the surge in energy prices caused by Russia’s squeeze on gas supplies, a trend the government has described as ‘alarming,’” says the front page of today’s Financial Times.

Alarming and totally foreseeable. But Western politicians are determined to “stick it to Putin,” and if it means condemning their subjects to freezing in the dark this winter, so be it.

Germany’s economy minister Robert Habeck, a member of the Green Party, professes shock that declining natural gas use by German industry is not the result of greater efficiency, but “a structural rupture, one that is happening under enormous pressure.”

If you’re thinking, “Oh, that’s happening over there, it won’t affect me,” we urge you to reconsider. Expect a tsunami of defaults and bankruptcies that will absolutely wash ashore in the United States.

That’s the reason we convened an urgent Zoom call today featuring Paradigm’s macro maven Jim Rickards, Jim’s senior analyst Dan Amoss and our resident energy expert Byron King. Come back to The 5 tomorrow for the highlights — and a link to the replay of the event.

Meanwhile, closer to home, here’s one of those “how it started, how it’s going” things… 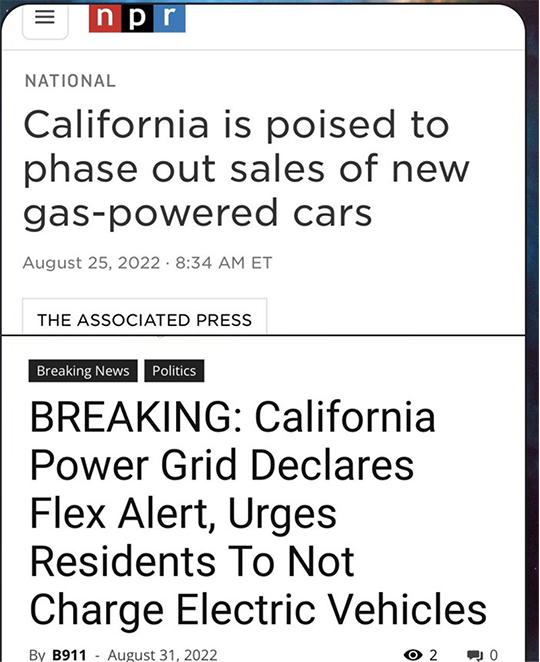 On the subject of retailers in New York state carding people for purchases of canned whipped cream, a reader writes…

“When our steadfast politicians are castigated for not doing anything useful to alleviate the opioid/fentanyl crisis they can at least say that they’re all over abusing nitrous oxide.

“And hey! Isn’t N2O one of those nasty gasses that inspired the greenies to interfere with agriculture in places like Sri Lanka and the Netherlands? What’s it doing in our Reddi-Wip?”

The 5: So now, allegedly, the whole thing was a giant misunderstanding.

The New York Times: “The law, which went into effect in November, prohibits the sale of the chargers used to dispense the sweet topping — not canned whipped cream itself — to people under 21.”

Barring the sale of canned whipped cream to under-21 buyers is not the intent of the law, says its sponsor, Sen. Joseph Addabbo Jr. (D-Queens). “What elected official would do that? It’s so silly.”

The Food Industry Alliance of New York State begs to differ: “There hasn’t been any guidance from the state on the true intent of the law,” says alliance president Mike Durant.

The upstate convenience store chain Stewart’s Shops — whose overcompliance with the law made the story go viral — stopped asking for ID for whipped cream purchases as of yesterday.