“At its core, ‘the Merge’ is a complete redesign of the way that the Ethereum blockchain is maintained and new Ethereum tokens are created.

“This works by having participants (called validators) put up a deposit,” — at minimum, 32 Ethereum tokens — “to promise they are not lying.

“Based on the size of their deposit,” says James, “each validator gets a corresponding vote on the true version of the latest blockchain record. Validators earn a yield on their deposit (or stake) to further incentivize them to participate.”

One noteworthy advantage of PoS mining?

“Numerous studies have found that Ethereum will use 99% less energy after the Merge,” James says. Give or take…

“The Ethereum Foundation put the number at roughly 99.95%,” says The Verge, “based on how much energy is used after the Merge by the computers still needed to store data and verify transactions.

“Overall, we’re talking about serious energy savings,” the article adds. Per Alex de Vries of the website Digiconomist, post-Merge energy savings should equal about one-quarter of electricity used by the globe’s data centers per year.

And the energy savings couldn’t come at a better time either (more on that later); plus, it might alleviate the environmentally conscious investors who’ve been sidelined by crypto’s serious energy-sucking tendencies.

Aside from the energy savings…

“Experts forecast that Ethereum will be destroying more currency than is created,” he says, “meaning that approximately 1–⁠2% of all Ethereum tokens will be destroyed every year.

“Over time, this will serve to reduce the total supply of Ethereum,” which “should also meaningfully improve the price from today’s current levels.” 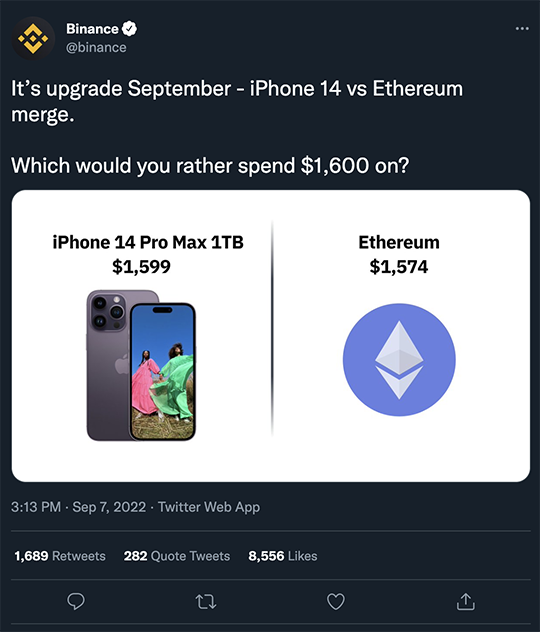 Post-Merge Ethereum will be a TRUE “complete redesign”… with deflationary upside.

“With the Merge right around the corner” — sometime between Sept. 13-15 — “I’m betting Ethereum could pay off big in the short term as well.

“The stakes are high,” he concedes. “Pulling off a major system change on the second-largest blockchain in the world is a bit like changing an airplane engine midflight.” Nevertheless? “Investors could benefit massively.”

James believes this might be the best opening, in crypto’s history, for investors to profit. Which is why he’s hosting a LIVE broadcast onMonday, Sept. 12, at 1 p.m. EDT to update you on this industry-disrupting Merge and more.

In other market news, the negative interest rate-loving European Central Bank, which has kept rates in negative territory since 2014, will raise its benchmark deposit rate to 0.75%, chasing an eventual target of 2% inflation for the 19 eurozone countries. Meanwhile, closer to home, Fed chair Powell says the Fed is committed to monetary tightening “until the job is done.” Umm, no pivot then?

“A big reason for the increased spending on EV batteries can be attributed to the tax break incentives from new U.S. climate laws,” Ray says.

“President Biden wants automakers to bring more battery production stateside… EV models must have a certain percentage of their battery components sourced from the U.S.

“Everyone from automakers to the feds will be devoting substantial resources to interstate charging stations over the next several years.

“Moreover, electric vehicle reservations are way up. Even with production delays increasing wait times, gas prices are pushing more people to jump on the EV train.

“Increased spending from automakers is a good sign,” Ray notes. Most recently, “Toyota announced its plan to spend $5.6 billion on electric-vehicle battery capacity. This move is a push for the Japanese automaker to catch up with the crowd.

“Toyota has long been cautious about making the transition to battery-powered cars,” says Ray, “but since December, Toyota has announced several plans for additional spending on EVs,” including “spending around $30 billion over the next decade.

“Toyota also aims to sell around 3.5 million EVs per year by 2030,” Ray continues, “a figure that is up from the previous target of roughly 2 million.

“Even with the poor sentiment across the broad market right now,” he concludes, “these plays look far into the future and are heavily discounted right now.”

Not that the irony is lost on us…

Pacific Gas & Electric cut power to residents in Northern California Tuesday and Wednesday… But don’t call it a blackout!

“As a historic heat wave hits the West, shattering records and straining California’s electricity grid,” says an article at USA Today, the state has issued “flex alerts” for eight consecutive days, “requesting residents and businesses to conserve power between 4 p.m. and 9 p.m. to prevent against any blackouts.”

“Miscommunication led utilities to mistakenly cut power to customers in several California cities during unprecedented demand… as the grid was perilously close to running out of energy.”

Which adds a scary layer of context to these stats… 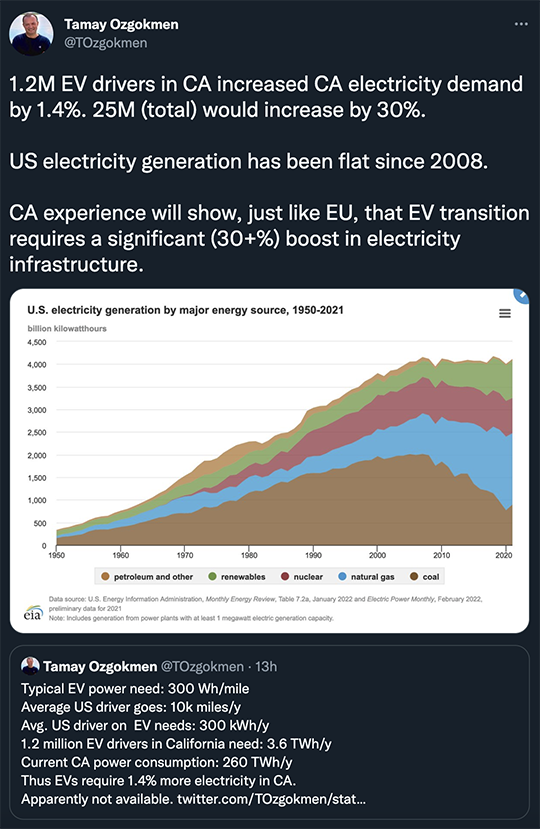 And here’s a dose of dark humor: “Relief on the horizon,” USA Today declares per Cali’s heatwave, “Hurricane Kay approaches.”

At issue is an EPA formaldehyde-emissions rule — the National Emission Standards for Hazardous Air Pollutants of 2004 — which has enjoyed an 18-year stay. Until now…

“Petrochemical plants, pipeline operators and other manufacturers will have to prove they’ve complied with EPA limits on formaldehyde,” the AP reports. And in Cheniere’s case, two Gulf Coast plants, located in Texas and Louisiana, will need to fall in line.

Cheniere spokesman Eben Burnham-Snyder says: “Our conviction remains that these emissions do not pose a risk to public health, our workforce or the environment.” On the other hand, community activists point to the Gulf Coast plants’ gas-powered turbines, which emit “cancer-causing” pollutants into disadvantaged communities.

Be that as it may, the green agenda-embracing and Ukraine flag-waving folks (typically, one in the same) are at cross purposes.

“Cheniere, the largest LNG exporter in the U.S., had warned that new requirements on LNG plants in Texas and Louisiana could disrupt gas supplies to Europe,” the AP says, “which has struggled with surging energy prices following Russia’s invasion of Ukraine.”

For the record: Ousted president Gotabaya Rajapaksa returned to Sri Lanka after a two-month absence.

CNN says: “After temporary stays in Maldives, Singapore and Thailand, Rajapaksa may have run out of countries willing to let him enter or stay.” Or? Rajapaksa, who considered himself a demigod, might have run out of money; the bills were racking up for private jets, presidential suites and a security detail.

But on Saturday, the disgraced president returned to the same Colombo airport that almost didn’t stamp his passport on July 13… when he had to make a hasty retreat from a pitchfork-y mob.

Rajapaksa still has his supporters, however — yeah, like new President Ranil Wickremesinghe — who has accommodated Rajapaksa with beefed-up security and all the rights and privileges afforded to former presidents, including an official residence.

It’s good to be a disgraced president in Sri Lanka… 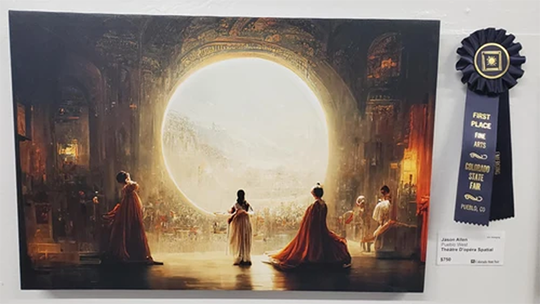 “Allen created Théâtre D’opéra Spatial by entering various words and phrases into [AI program] Midjourney, which then produced more than 900 renderings for him to choose from,” says Smithsonian magazine.

“He selected his three favorites, then continued adjusting them in Photoshop until he was satisfied. He boosted their resolution using a tool called Gigapixel and printed the works on canvas.”

But after the Colorado State Fair posted Allen’s creation on social media, butt-sore artists sounded off on the collapse of Western art. “We’re watching the death of artistry unfold right before our eyes,” said one overwrought Tweeter.

Calm down, OK? First, Mr. Allen never tried to pass off his canvas as anything other than digital art. Second, yes, the piece was AI-enabled, but Allen still spent 80 hours on his work.

Third, has Mr. Allen ever considered a NFT? Call us…

You all take care! We’ll be back with more of The 5 tomorrow.