OK, this is funny. 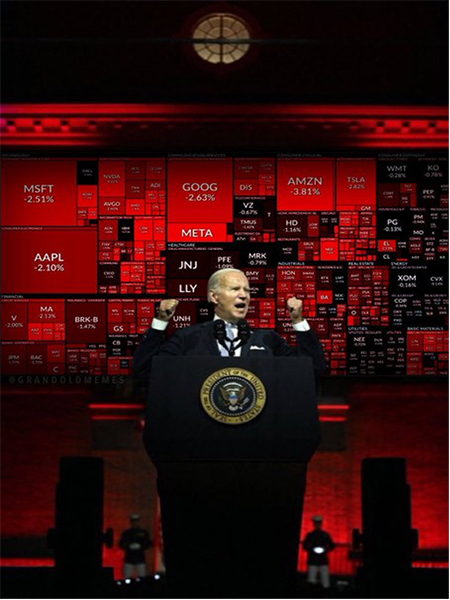 But otherwise there were way too many partisan hot takes on the web yesterday as the stock market melted down and the president professed to be unconcerned about the August inflation numbers.

Yes, Joe Biden shoulders an immense amount of blame for the present state of affairs. But let’s not forget that Donald Trump 1) ran a trillion-dollar deficit before the pandemic and 2) caved to the “experts” who said his only choice in 2020 was to shut down the economy and print trillions more in stimmies.

The stock market’s snit yesterday was a shock — but it shouldn’t have been a surprise.

No, it was the Financial Times that captured conventional wisdom the best: “Hopes that the Federal Reserve can engineer a soft landing for the U.S. economy took a hit on Tuesday when a crucial measure of inflation came in higher than forecast and triggered a sharp sell-off on Wall Street.” [Emphasis ours.]

We don’t know who in his or her right mind still expected the Fed could pull off the proverbial “soft landing” — raising interest rates without crashing the economy, the markets or both.

Just the odds alone argue against it: The Fed has embarked on a dozen or so rate-raising cycles since the end of World War II. Only once did it perform a soft landing — 1994.

So on the heels of the stock market’s worst one-day performance in over two years… Paradigm Press Group’s Jim Rickards says much worse is in store.

That’s why he’s organizing a live online briefing set for this Sunday evening at 7:00 p.m. EDT. The title he’s giving this one should give you a pretty good idea of what he thinks is ahead: It’s the “American Death Angel Summit.”

“Now is not the time to sit with idle hands,” Jim warns. Start preparing yourself and sign up for free access to this event — one click at this link, and you’re in.

For the moment, the stock market’s free fall has been arrested.

Bond yields are pulling back a bit, the 10-year Treasury note a hair over 3.4%. Gold clings to the $1,700 level while silver is staging a recovery after yesterday’s beat-down at $19.60. After the Energy Department’s weekly inventory numbers, crude is up 3% and only three pennies away from $90.

The big economic number today is wholesale inflation: The August producer price index is down 0.1% month over month, up 8.7% year over year.

The good news is that the 8.7% figure for August is down from a peak of 11.2% in March. The bad news is there’s about a one-year lag between what shows up in these numbers and what shows up on store shelves. So the real pain for consumers won’t hit until next spring.

Alas we’re not done with our dirge of doom: The White House seriously believes that when it comes to the looming national rail strike, they’ve got everything under control.

We’ve been warning about this possibility since July, and now it’s crunch time: Rail workers from seven unions could walk off the job as early as Saturday — as many as 96,000 workers by our count.

Several railroads are already starting to shut down operations, lest any hazardous materials get stranded someplace where they shouldn’t sit for a long time. (That includes stuff like, oh, for instance — chlorine, which is essential to treating municipal water supplies.)

Enter the Biden administration: “Senior administration officials,” according to The Wall Street Journal, “are communicating with ocean-shipping, trucking and airfreight companies among others to determine how to keep goods moving.”

Just great. Rather than let the free market figure out the logistics, a bunch of nimrods in the West Wing with zero experience outside of lobbying and/or academia can now play virtual commissars — ordering grain shipments onto trucks, lumber cargoes onto ships, etc. What could go wrong?

Talks to avert a strike continue. But time’s running short…

Supply-chain problems we hadn’t started to worry about yet: It seems there’s a shortage of electrical transformers — you know, these things… 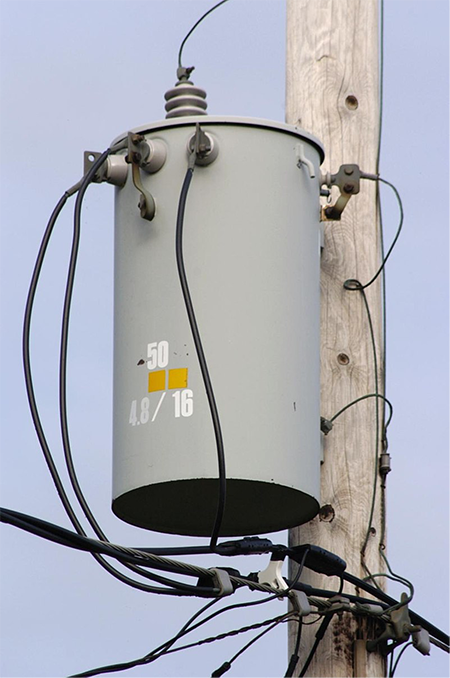 Yeah, you don’t really think about them — until they’re not available
[Wikimedia Commons photo by Glogger]

“In recent months,” reports the Route Fifty website, “utilities have been reporting wait times of over a year to get transformers, and say costs have skyrocketed from $3,000–⁠4,000 per transformer before the shortage, to more than $20,000 each now.”

Electric utilities say they’re hard-pressed to figure out what brought about the shortage.

Some possibilities: Good help is hard to find for transformer manufacturers, as it is for everyone else. In addition, transformers require a specialized variety of steel made by only one U.S. company (Cleveland-Cliffs, if you’re curious)… and the Biden administration insists on maintaining Donald Trump’s ruinous tariffs on imported steel dating back to 2018.

A handful of congresscritters — mostly from states vulnerable to hurricanes — are trying to sound the alarm. (It’s been a quiet hurricane season but a tropical depression formed in the Atlantic just today.)

In a letter to the White House, they’re demanding the Energy Department “temporarily suspend its most recent conservation standards for transformers, which require manufacturers to use more steel than previously required.”

Sounds like a Band-Aid to us, but we’ll keep you posted.

Washington’s attempts to stymie China’s semiconductor industry will likely backfire — and shoot America’s chip industry in the foot as well.

So concludes our resident futurist George Gilder after the Biden administration suddenly curbed the sale of high-end artificial intelligence chips by Nvidia and AMD to China. (The rationale, of course, was “national security.”)

In a recent broadside he wrote for readers of The George Gilder Report, Mr. Gilder runs down a list of questions about the new rules that he proceeds to answer. Some choice excerpts:

By cutting off a source of chips for China, the new rules will ironically force China to produce more of its own chips. “The real challenge in bringing a cutting-edge chip to market is mastering the cutting-edge manufacturing processes it inevitably requires.” Now China has every incentive to figure that out and go it alone.

Meanwhile, sales at Nvidia and AMD are set to decline: “By reducing the revenues of the leading American chip companies, we actually reduce the prospects of increasing domestic production. And we sacrifice all the learning curve benefits that would come with it.”

Ironically, Team Biden’s moves have knocked down the price of Nvidia shares so much — it’s 60% off its 52-week high — that George is actually considering adding NVDA to his readers’ recommended portfolio.

You know “pumpkin spice” has arrived when it gets its own dictionary entry.

Merriam-Webster announced last week that it’s added 370 words and phrases to its dictionary. Shrinkflation is one of them, by the way — “the practice of reducing a product’s amount or volume per unit while continuing to offer it at the same price.”

But we bring up the addition of pumpkin spice because it reminds us of a business story from our voluminous archives.

In 2014, blogger Vani Hari — aka the “Food Babe” — launched a diatribe against Starbucks: “They still do not list the ingredients in their most popular items: their drinks.”

As we said at the time, if she wants her followers to bring pressure to bear and achieve change without government’s heavy hand, that’s great. But it seemed a little strange that some of those followers fixated on the lack of pumpkin in a Pumpkin Spice Latte.

“It’s called a pumpkin spice latte,” pointed out another food blog called Eat Drink Better. “And I do believe the emphasis is accurately reflected on ‘spice.’ Because putting actual pumpkin into coffee would be pretty darn disgusting.”

“James Altucher is probably a nice guy but there is zero chance that he is going to get me into crypto,” a reader writes.

“Definitely the biggest scam since tulip mania and likely to cause some real damage to the financial order. Not to mention all the people who have sustained losses.

“Glad you have Jim Rickards to maintain sensibility!”

The 5: To each his own. That’s why we have editors with diverse opinions and we don’t enforce a “company line.” We want our editors to speak as freely as possible and we respect the reader’s intelligence enough to sort out differences for himself or herself.

That’s a mighty low bar you’ve got there!