Because it doesn’t line up with the narrative of Western elites and media, it’s up to us to pass along the following… 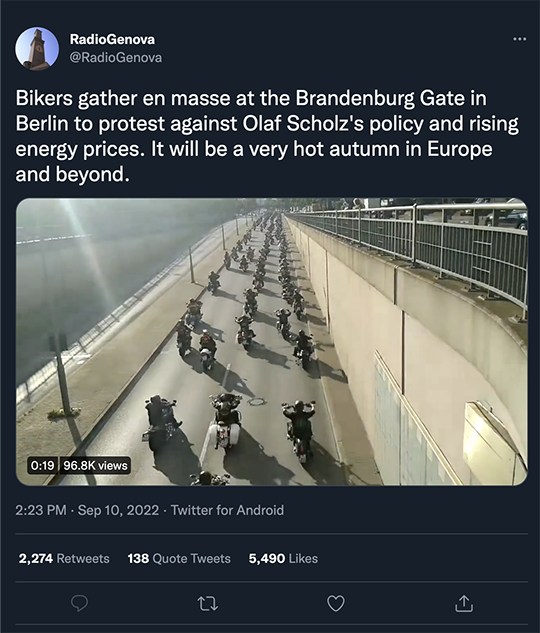 Oh, but European Union leaders think they’ve got it all figured out — a sure-fire way to buy off the restive masses.

“The European Union outlined a plan to redistribute about $140 billion from energy companies to consumers and businesses,” says the front page of today’s Wall Street Journal, “in a bid to cushion the blow of high prices stoked by Russia’s punishing assault on the continent’s economy.”

We were about to describe how the scheme is supposed to work until we realized there’s no point — because no matter how it’s designed, it won’t work.

Let’s lay out all the reasons why…

The first reason shows up on the front page of the other major Western financial newspaper.

“The U.S. shale industry has warned it cannot rescue Europe with increased oil and gas supplies this winter,” says the Financial Times — “amid fears that a plunge in Russian exports will send crude prices soaring back above $100 a barrel.”

American producers are already drilling flat-out. They’ve got nothing left to give.

“There’s no bailout coming,” says Wil VanLoh of Quantum Energy Partners — one of the biggest investors in U.S. shale energy. “Not on the oil side, not on the gas side.”

So there won’t be any additional supply coming from America — which brings us to the second reason the EU scheme won’t work.

It comes down to that most basic of economic principles — supply and demand.

A note to clients from Goldman Sachs makes it plain: “With interventionist policies announced so far prioritizing capping energy costs over curtailing demand, the concern is always that such measures end up incentivizing higher energy consumption, thereby making the gas deficit worse.”

But the biggest reason it won’t work is the matter of “whether oil and natural gas will be available at any price,” warns Paradigm Press Group’s macroeconomics maven Jim Rickards.

“Russia has now cut natural gas flows through the Nord Stream 1 pipeline to zero. The Nord Stream 2 pipeline has been constructed but never opened, so that flow is also zero.

“Russia is diverting oil sales to India and China, so that oil is not going to Europe. OPEC+ just announced small reductions in total oil output. Biden continues to strangle the energy industry in the U.S. in pursuit of his green new scam policies.

“Of course, this all drives the price of energy higher, but the real problem is that there is no energy at all. The timing is not coincidental, because winter is coming. Rebates to consumers and price caps don’t solve the problem of supply. The supply situation is becoming critical.

“Europeans may enjoy their rebate checks, but they’ll have to light a candle in the dark to read them. That’s further assuming they can hold the checks steady in their shivering hands. It will be a cold, dark winter in Europe. Subsidy checks can’t prevent that.”

So he’s organizing an exclusive online briefing to help you get ready, and the name he’s giving it says it all: The “American Death Angel Summit.”

It’s set for this Sunday at 7:00 p.m. EDT. You can look in on this event absolutely FREE. All we ask is that you register with your email address in advance — which you can do in mere seconds at this link.]

Sorry, no relief rally in the stock market even though a national rail strike’s been averted. Indeed stocks are approaching a danger zone. And gold is already there.

After Tuesday’s brutal beat-down, and yesterday’s feeble rally, the S&P 500 is down 28 points or nearly three-quarters of a percent. At 3,918 it’s nearing the critical 3,900 mark — the midpoint between the June lows and the August highs. Anything lower than 3,900 from here suggests — at the least — a high likelihood of more selling.

As our crypto team of James Altucher and Chris Campbell anticipated, “the Merge” in Ethereum is setting up a buy-the-dip opportunity.

The Merge took place overnight on the U.S. East Coast — switching from a Bitcoin-like “proof of work” model to a less energy-intensive “proof of stake” arrangement.

And for a handful of tiny cryptos built on the ETH architecture, the price moves could be stratospheric. Our replay of James’ Crypto Disruption Summit is still available for viewing through midnight tonight.

After that, we’re taking it down — there’s just too much risk the information will be out of date.

There’s less than meets the eye to the big economic number of the day.

Retail sales jumped 0.3% in August — in contrast with expectations for a flat number. But the July figure was revised downward, and not by a little. In addition, the August figure is skewed by a surge in auto sales (which are notoriously volatile month to month), and a drop in gasoline sales (which is no surprise given falling gas prices).

If you throw out auto and gasoline sales, the number came in weaker than expected — a 0.3% jump instead of the 0.6% the “expert consensus” was counting on.

In other August figures, industrial production slipped 0.2%. Whoops, your typical Wall Street economist was looking for a 0.2% increase.

Also included in this report is the important “cap ute” number, which shows 80% of U.S. industrial capacity was in use during August. On a five-year chart, it’s clear this number has plateaued for the post-pandemic era… 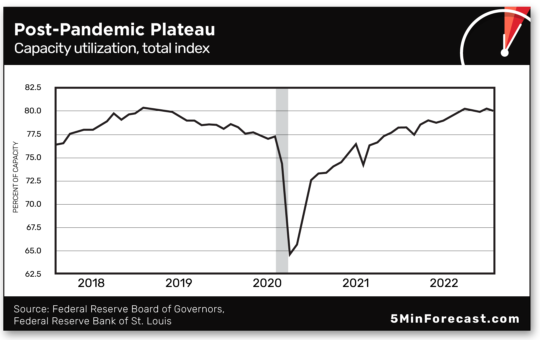 We also got a glimpse this morning into the economy’s performance so far in September: Federal Reserve surveys of factory managers suggest that manufacturing activity is contracting in both New York state and the mid-Atlantic.

So the British royal family possesses something akin to corporate naming rights. Who knew? 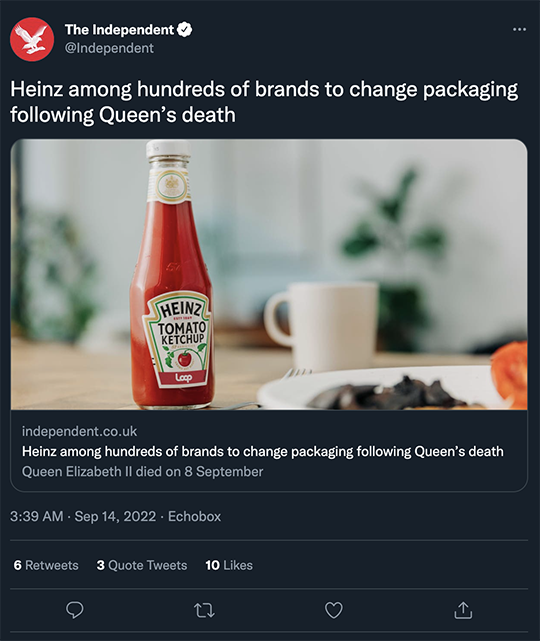 Note the insignia on the neck of that bottle of Heinz ketchup there. That’s how it’s packaged in the United Kingdom.

“The distinctive image,” says the Daily Mail, “depicts the lion of England, the unicorn of Scotland and a shield divided into four quarters, along with the words ‘by appointment to Her Majesty the Queen’… Companies are given permission to display the symbol, known as the Royal Warrant, in exchange for providing goods or services to the Royal Household.”

As you surely know by now, the Queen died a week ago today. Rights to the Royal Warrant are thus null and void.

No, Heinz won’t have to issue a recall. There’s a two-year grace period, during which “brands must reapply to King Charles III and prove the Royal Household regularly uses their products if they want to retain the benefit.”

Twining’s tea and Gordon’s gin are among the other brands that will have to jump through the hoops — which according to Buckingham Palace include a requirement “to demonstrate that they have an appropriate environmental and sustainability policy and action plan.’”

Gawd, Charles’ reign is going to be just insufferable…

“Collectors are scrambling to get their hands on coins with Queen Elizabeth’s face as prices skyrocket after her death,” reports Australia’s NCA NewsWire. In particular the Platinum Jubilee Coin from the Royal Australian Mint goes for well over $60 — five times its issue price of $12.50. One dealer expects the price to peak as high as $300.

Closer to home, a coin dealer in Gardner, Massachusetts, is seeing high demand for Canadian silver pieces issued in the five years after Elizabeth’s coronation in 1952. “They are selling better than they have in quite a while,” dealer Joseph Valardi tells the Springfield Republican. 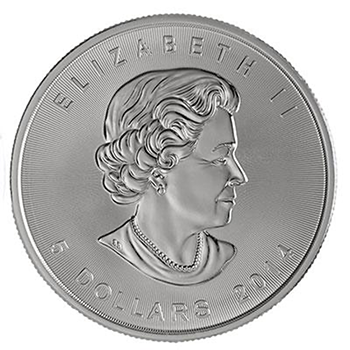 Hard Assets Alliance uses the power of its extensive wholesaler network to deliver some of the lowest retail precious metals prices anywhere. Not a member yet? Here’s where to sign up. [Full disclosure: Paradigm Press owns a stake in Hard Assets Alliance and will collect a small cut once you fund your account. But we wouldn’t have made that investment unless we knew they’d do right by our customers.]

To the mailbag: “Quite the ‘co-inky-dink’ — you mentioning the shortage of electrical transformers in yesterday’s 5, Dave.

“I had just received this email from the Space Weather Prediction Center the same afternoon:

“I have read that a strong enough geomagnetic pulse would do widespread damage to the electrical grid by ‘frying’ transformers. Shortages of same would last for years — in ample-inventory times — should a pulse hit. Seems to me this shortage should be addressed — and soon.”

The 5: The good news is that most power-grid operators are as plugged in to the forecasts for geomagnetic storms as you are.

In the event of a huge coronal mass ejection, the travel time from the sun to the Earth should be enough for them to take preventive measures. Unfortunately we haven’t had a real-world test of this thesis since 1989 — when a CME did knock out much of Quebec’s extensive hydropower system.

Speaking of risks to the grid, we’re reminded of something we related in 2014 — a report issued to the Federal Energy Regulatory Commission. It spun a harrowing tale in the event that saboteurs were to strike: “Destroy nine interconnection substations and a transformer manufacturer and the entire United States grid would be down for at least 18 months, probably longer.”

On the subject of pumpkin spice lattes, a reader responds to the point about how the emphasis is not on the pumpkin but the spice.

“That’s because it’s actually pumpkin pie spice!” he points out.

Which is true. But we strongly doubt Starbucks would have successfully launched a phenomenon if it had stuck to that nomenclature. Really, would “PPSL” have ever caught on?