The Media vs. Jim Rickards

Here at The 5, we knew the media’s practice of “fact-checking” was going off the rails years ago — when NBC News issued the following pronouncement after one of the Hillary Clinton-Donald Trump debates in 2016. 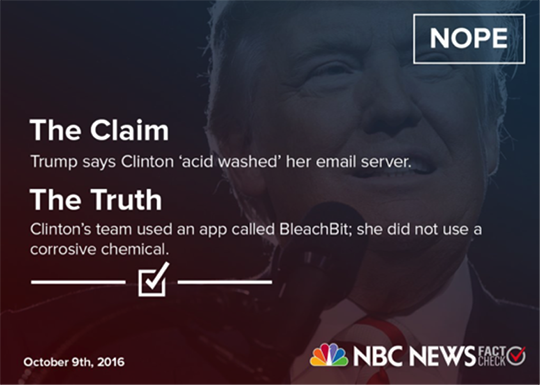 The absurdity only snowballed in the years that followed.

By the time we got to summer 2022, social media was slapping the “misinformation” label on people expressing an opinion about whether the U.S. economy had entered a recession — citing “independent fact-checkers” in traditional media as their authority.

“This is yet another reminder that the project of purportedly independent fact-checking on social media is a highly partisan one,” wrote Robby Soave at Reason, “in which legitimately debatable opinions are passed off as objective truth.”

Which brings us to the uber-Establishment Associated Press, taking on Paradigm’s macroeconomics maven Jim Rickards… 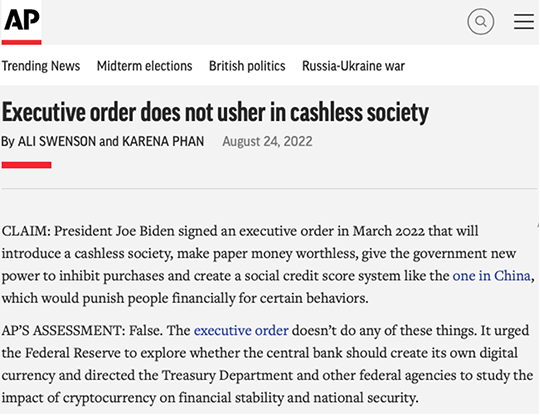 Clearly what the AP has in mind originated with the “Biden Bucks” sales promotion for Rickards’ Strategic Intelligence that Paradigm Press began distributing this summer.

Presumably you’re familiar with it by now; perhaps you started getting this e-letter as a bonus to your new Strategic Intelligence subscription.

Thing is, the AP does not take on Paradigm or Jim directly; no, its “journalists” are too spineless to do that.

Instead, they use random Facebook posts as punching bags, like this one: “A global ‘CASHLESS SOCIETY’ is being rolled out, possibly in December 2022.” (For the record, there is nothing in Jim’s presentation with that date attached. He surmised “2023 or 2024.”)

Then they turn to the text of Joe Biden’s executive order, dated March 9 of this year. Why no, they say, it doesn’t actually create a central bank digital currency. There’s nothing in there about shredding your privacy or rendering existing cash worthless or introducing a China-style social credit system.

Instead, “it directs the Federal Reserve and other agencies to study the risks and benefits of that approach and charges the attorney general with deciding whether legislative changes would be necessary to implement such a change.”

See, totally harmless! Just a bunch of bureaucrats debating a bunch of arcane details. Don’t worry your precious little head about it!

Of course, you’re a critical thinker and so you realize Jim is thinking a few steps ahead here — teasing out the ramifications of what’s in the official document.

Isn’t that the sensible thing to do with any action of the government?

For that matter, since we’re talking about the media here, isn’t it the job of a free press to hold government accountable and alert the citizenry to the potential for government abuses? (Yeah, I know, dream on. I’ll have something to say about that later…)

In contrast with the AP, the internet-debunking website Snopes at least has the stones to take on Jim and Paradigm Press directly.

There was a time back in the early days of the web when Snopes was useful. It was where you could go to confirm that yes, your Uncle Frank was full of it when he forwarded you that email about “Federal Bill 602P” — which was supposed to fund the Postal Service with a nickel tax on every email you send.

Nowadays, though, Snopes is just another strident voice in the mainstream echo chamber. For a while it performed painfully earnest fact-checks on obviously satirical articles at The Babylon Bee website. Literally, Snopes pushed back against a story headlined “CNN Purchases Industrial-Sized Washing Machine to Spin News Before Publication.”

In the present instance, Snopes relies on the same NUH-UH, IT’S NOT IN THE TEXT! argument the AP does.

“We found no language in Section 4 of the nine-section order that calls for replacing the U.S. dollar with digital currency, or takes any of the other drastic, unconstitutional steps listed by the Paradigm Press website.”

This ruse has become the media’s MO with fact checks — “crafted to distract you from the point and suck you into an argument over meaningless details and definitions,” as the writer C.J. Hopkins observed recently.

The story Hopkins had in mind was testimony this month by a Pfizer executive to the European Parliament. She conceded the firm did not know whether its COVID vaccine prevented transmission of the virus before it was widely promoted as doing exactly that starting in late 2020.

“People saw the video of the executive admitting this, or heard about it, and got upset,” wrote Hopkins. “They tweeted and Facebooked and posted videos of Pfizer CEO Albert Bourla, Bill Gates, the director of the CDC, official propagandists like Rachel Maddow and various other ‘experts’ and ‘authorities’ blatantly lying to the public, promising people that getting ‘vaccinated’ would ‘prevent transmission,’ ‘protect other people from infection,’ ‘stop the virus in its tracks’ and so on.”

Enter the fact-checks from The Associated Press, Reuters and PolitiFact. “Pfizer never claimed to have studied the issue before the vaccine’s market release,” says the AP — glossing over the point that millions of people got the jab based in part on the assertions of “authoritative people” that it prevented spread — even though we now know there was no supporting evidence.

And, we might add, they’re lying about a CBDC or Biden Bucks or whatever you might choose to call them.

If for some reason you haven’t acquainted yourself with Jim Rickards’ take that’s now brought out the mainstream’s pitiful attempts at a takedown, here once again is the link.

Please allow your editor a personal aside — seeing as I committed daily acts of journalism for 20 years.

As a TV news producer and manager, I took to heart the old-fashioned journalistic values of accuracy and probity. The turning point when I realized I needed to get out of the racket was the Iraq War.

In September 2003 — six months after the U.S. invasion — a poll showed 69% of Americans still believed Iraq’s Saddam Hussein had a role in the 9/11 attacks.

If, like me, you took advantage of the internet to read the foreign press — or the skeptical reporting of the now-defunct Knight Ridder newspaper chain — you knew better long before the tanks rolled in. But U.S. media, by and large, toed the dishonest Bush-Cheney line.

It was the instant I saw those poll numbers that I knew my chosen profession had failed spectacularly at its most solemn responsibility. “Only a free and unrestrained press can effectively expose deception in government,” wrote Justice Hugo Black in the 1971 Pentagon Papers case.

Nearly two decades after that poll, it’s now common knowledge that both traditional media outlets and social media act on behalf of, and in service to, the permanent governing class sometimes called the “deep state.”

They routinely seek to squash anything that runs counter to conventional wisdom and orthodox narratives.

It was my immense good fortune that I found a new home of kindred spirits in the financial publishing industry. Going all the way back to Roger Babson’s warnings that the Roaring ‘20s were destined to end in tears, newsletter editors have given voice to a nagging feeling people have in the back of their minds — that reality isn’t the way mainstream gatekeepers portray it.

So it’s no surprise to see the AP and crew going after Jim Rickards — by now, one of the most prominent personalities in the financial newsletter industry. After all, we were the original “alternative media” long before the internet.

I’ll give the last, derisive, word to a colleague who once worked for the AP…

Memo to the AP and Snopes: It’s satire!

To the markets, where reality is setting in.

After the closing bell yesterday, two of the four biggest tech-adjacent companies reported their quarterly numbers. Google logged a fifth-straight quarter of declining sales growth; ad revenue at YouTube fell for the first time since the company started breaking out YouTube’s numbers. Meanwhile, Microsoft posted its worst earnings decline in over two years, and its weakest revenue growth in over five.

And with that, the Nasdaq is in the red for the first time since last Thursday — down 1.5% as we write, barely holding on to the 11,000 level.

For the moment, all those hopes of a “Powell pivot” — that the Federal Reserve will abandon its monetary tightening any day now — are dashed. (But hope springs eternal — as Emily will lay out in tomorrow’s edition.)

Bond yields are falling, the 10-year Treasury only a hair over 4%. Precious metals are up modestly, gold at $1,666 and silver at $19.51. Crude is rallying after the Energy Department’s weekly inventory numbers — up nearly three bucks to $88.05.

➢ One economic number of note: September new home sales rang in slightly better than expected, but they’re still down 17.6% year over year. Prices are up 13.9% year over year, but that’s skewed mostly by the high end of the market. Inventory sits at 9.2 months’ worth; homebuilders are definitely pulling in their horns.

To the mailbag: “On the subject of nuclear war,” a reader writes, “have you seen this infographic making the rounds on Twitter? Yikes.

“It really puts things into perspective on how dicey the Cold War nuke threat was in the 1970s and ’80s. And how dicey it is now with Russia and several other countries holding multiple nukes including China, Pakistan, India, Israel and North Korea.

“It’s also glossed over in the history books that the U.S. had almost seven times the number of nukes the USSR had in 1962 during the Cuban Missile Crisis (but yeah all it takes is a few well-placed missiles/bombs to wipe out entire cities).”

Another reader weighs in on the same topic: “All these actions of the current administration lend credence to the ‘conspiracy theory’ that the world’s elites want to reduce the population of the world to 500 million and that the current occupant of the White House is their puppet. Eh?

“Either that or the current administration is full of brain-dead people?”

The 5: We’ll opt for “stupid” over “evil” most of the time. Not that the two are mutually exclusive, of course…