In years gone by, we’ve mercilessly mocked this sort of hype. Here was Bloomberg again on June 11, 2018: “Brace for the World Economy’s Most Important Week of the Year.”

By the end of July, no one could remember anything that happened that week — other than maybe a meeting between Donald Trump and North Korea’s Kim Jong Un, and that event had zero impact on markets.

But now, there’s something to it. More than the mainstream is letting on, as it happens.

“In the span of just seven trading sessions,” says the article beneath the current breathless headline, “there will be four major events that could shape the market’s outlook for the rest of the year — and potentially prompt a rapid about-face by confounding expectations.

“On Nov. 2, the Federal Reserve will announce its latest interest-rate decision and give hints about its path forward, possibly signaling plans to ease back from the aggressive pace of hikes that’s threatening to drive the economy into a recession.”

That’s tomorrow, we hasten to point out. And there’s even more reason to worry than the corporate media care to reveal — as Paradigm’s Jim Rickards discussed Sunday night during his Road to Ruin: The Final Chapter summit. (The replay is still available to watch at this link: Do it now, because the Fed will set the market’s next downleg into motion at 2:00 p.m. EDT tomorrow.)

After the Fed meeting comes the October jobs report this Friday… the midterm elections a week from today (which we’ll address in-depth later this week)… and the October inflation numbers on Nov. 10.

But there’s a fifth key date for the markets that’s still flying under the mainstream’s radar — oddly, a day the markets won’t be open.

We’ve been monitoring the possibility of a nationwide freight rail strike since mid-July — an event that could utterly break America’s already-snarled supply chains.

About six weeks ago, it looked as if the major railroads had come to terms on a new contract with union leaders, with a nudge from the White House.

But then the deal went before the rank-and-file for a vote. In late September, one of the 12 unions involved rejected the deal… and last week, a second did as well. Over 60% of the Brotherhood of Railroad Signalmen voted against.

The first union to reject, the Brotherhood of Maintenance of Way Employees, could walk out as early as Saturday Nov. 19 — less than three weeks from today. It could easily snowball from there.

“It is estimated that a railway strike would cost the U.S. economy over $2 billion per day,” says Jim Rickards.

“Railroad management are downplaying the possibility of a strike and claiming that the unions will see reason, or the administration will step in. That may be wishful thinking.

“The unions have concerns not only about pay but also about safety and health care that they feel have not been addressed.

“With supply chains already breaking down and the economy already weak, a major rail strike would all but guarantee a serious recession beginning in the fourth quarter of 2022. This prospect is definitely not priced into stock prices. That may change soon and pull stocks to new lows. Get ready for another supply-side shock to prices and markets.”

[Ed. note: To reiterate, that supply-side shock is on top of the shock the Fed is set to deliver tomorrow at 2:00 p.m. EDT. That’s why it’s imperative you watch Jim’s Road to Ruin: The Final Chapter event immediately. Click here for instant access.]

The U.S. factory sector is this close to shrinking for the first time since the lockdowns.

The ISM Manufacturing Index, out this morning, fell to 50.2 for October. Anything below 50 indicates contraction.

Perhaps most worrisome — unless you’re the Fed and you believe a recession is the only way to kill off inflation — is that companies are putting hiring plans on hold and they’re not trying to replace workers who quit.

After what the mainstream touted as “the best month for the Dow since January 1976,” the new month is starting on a mild down note.

Traders in energy stocks seem nonplussed at the chatter from Washington about a “windfall profits tax” on oil companies — presumably like the one imposed by Jimmy Carter and Congress in 1980.

So far, it’s just Joe Biden jawboning. There’s legislation in Congress, but it’s languished in committee since March. Assuming Republicans win at least one House of Congress next week, something would have to be passed before year’s end while Democrats remain in control.

“One of the important topics covered by just about every speaker is America’s energy crisis,” says Paradigm’s value-and-dividend hound Zach Scheidt — on scene this week at the big MoneyShow conference in Orlando.

The speaker that most caught Zach’s attention was Phil Flynn from Price Futures Group — who believes the biggest geopolitical risk factor facing investors is the green-energy push.

As Zach sums up: “We simply aren’t producing enough oil, refining enough gasoline and diesel or creating the necessary infrastructure for the U.S. economy to continue to grow.

“But the good news is that energy companies that are producing oil, refining fuels and operating infrastructure assets like pipelines will do very well. And our investments in these profitable energy plays will continue to pay dividends (both figuratively and literally) for years and years to come.”

Newly revealed documents confirm what you already knew: The social media giants are totally collaborating with the feds in their censorship efforts… 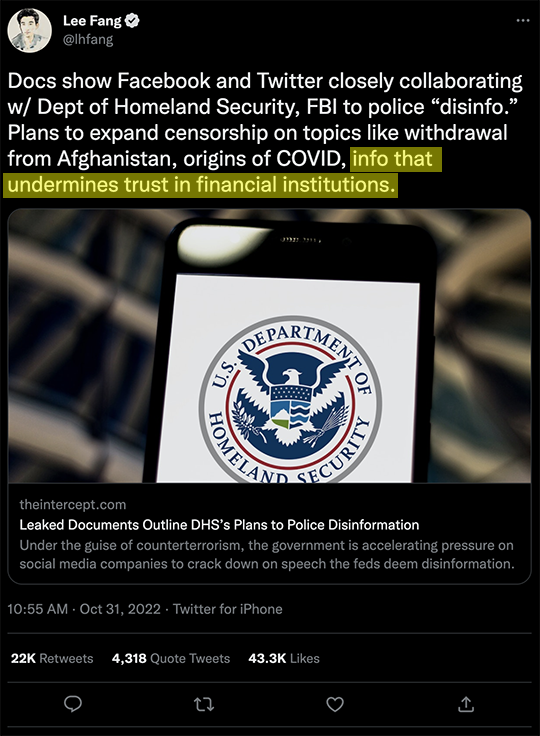 Many of the documents have turned up during the discovery process in a lawsuit brought by the attorneys general of Missouri and Louisiana. As we’ve mentioned before, they sued the Biden administration in May — hoping to uncover evidence that the White House was suppressing COVID-related speech protected by the First Amendment, while trying to make it look as if the social-media companies were acting on their own.

That evidence is now pouring into view. Reporters Lee Fang and Ken Klippenstein from The Intercept have taken the time to sift through it — along with other documents, both leaked and public.

Their takeaway: The Department of Homeland Security might have scrapped its “Disinformation Governance Board,” but the board’s mission goes on. “Other initiatives are underway as DHS pivots to monitoring social media now that its original mandate — the war on terror — has been wound down.”

And the collaboration goes way beyond COVID.

The 2022 edition of DHS’ “Quadrennial Homeland Security Review” reveals the department’s plans to take aim at “inaccurate information” on a multitude of topics including “the origins of the COVID-19 pandemic and the efficacy of COVID-19 vaccines, racial justice, U.S. withdrawal from Afghanistan and the nature of U.S. support to Ukraine.”

Also this year, a DHS advisory committee recommended the agency draw up steps to halt the “spread of false and misleading information” — especially anything that undermines “key democratic institutions, such as the courts, or by other sectors such as the financial system, or public health measures.”

In other words, there’s nothing under the sun that’s beyond DHS’ censorship purview — including things the government thinks might undermine “the financial system.” (Gold? Bitcoin? Let your imagination run wild…)

“If a foreign authoritarian government sent these messages,” says former ACLU president Nadine Strossen, “there is no doubt we would call it censorship.”

And the social-media platforms are willing collaborators.

For one thing, that DHS advisory committee included Vijaya Gadde, the head of legal, policy and trust at Twitter — one of several “woke” Twitter executives shown the door by Elon Musk in recent days.

For another thing, there’s this text message from Microsoft exec Matt Masterson — a former DHS official — to Jen Easterly, director of the Cybersecurity and Infrastructure Security Agency: “Platforms have got to get comfortable with gov’t. It’s really interesting how hesitant they remain.”

The Intercept’s reporting reveals monthly meetings to raise the comfort level, you might say — starting in the run-up to the 2020 election. Representatives of tech companies, including social media platforms, met with representatives of DHS and the FBI.

The feds flagged nearly 4,800 social media posts during the election; more than one-third were removed or labeled as potential misinformation. Facebook even created a special portal for DHS and law enforcement to report information directly.

Of course, this being the government, there’s a Keystone Kops aspect to some of this effort.

As Fang and Klippenstein report, “In many cases, the Facebook and Twitter accounts flagged by DHS or its partners as dangerous forms of disinformation or potential foreign influence were clearly parody accounts or accounts with virtually no followers or influence.”

One of them was a Twitter user with a not-so-whopping 56 followers — “along with a bio that read ‘dm us your weed store locations (hoes be mad, but this is a parody account),’ under a banner image of Blucifer, the 32-foot-tall demonic horse sculpture featured at the entrance of the Denver International Airport.”

Yes, we can chuckle — but really, it’s no laughing matter, which is why we’ve devoted a meaningful chunk of our 5 Mins. to the topic today.

Before we go, a random inquiry to the readership: Please help jog your editor’s memory. In early 2014 we got an email from a reader who recommended we watch a certain documentary. Turns out we’d watched it already… but we’ve long since forgotten the name.

The only thing that turns up in The 5’s voluminous archives is this description of mine: “Good stuff about the Fed, big banks, Big Pharma, Big Agra, the seamy nexus between Big Business and Big Government. The stuff about ancient astronauts and free energy? Not so much…”