And so here we are, The Most Important Midterm Election In History™. Pardon us for not sharing in the excitement… 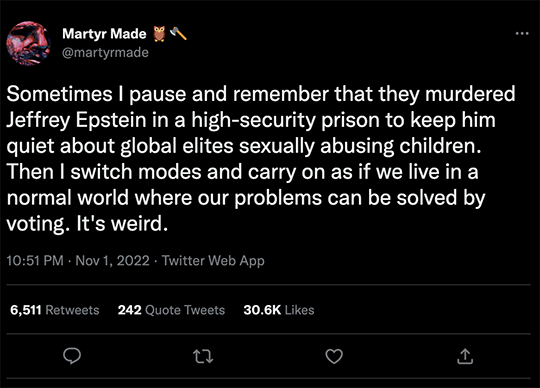 Don’t just chortle. Let’s meditate on this for a moment.

Even if you believe the official story of Jeffrey Epstein’s demise in 2019, it’s still a devastating indictment of a system that voting isn’t going to fix. All you have to know is this…

And is the way to achieve accountability to “vote harder”? Really?

So we don’t have much confidence that there will be any accountability for what Paradigm’s macro maven Jim Rickards calls “Biden’s cold cover-up.”

As Jim detailed in an Emergency Election Briefing on Sunday night, the Biden administration has moved heaven and earth to push the worst impacts of its energy policies past Election Day.

And sure enough, the dam is about to burst. Yesterday we spotlighted an imminent shortage of all the fuels needed to keep the Northeastern U.S. warm in the winter. Today, it’s the fact that the miracle workers of the American oil patch are pulling in their horns.

Recall that the revolution of hydraulic fracturing or “fracking” is what propelled America from about 5 million barrels of daily oil production in 2009 to over 13 million by 2019. The technology wasn’t exactly new, but American know-how finally became efficient and economical — and it returned the United States to the ranks of the top three global producers along with Russia and Saudi Arabia.

But that was then and this is now: “What was expected to be a banner year for U.S. oil production has failed to materialize,” says the Journal, “as creeping inflation-related costs, supply-chain snarls and disappointing well performance for some companies have coalesced to limit domestic output, executives and analysts said.”

All of which is true… but there’s another factor the Journal is too “PC” to point out.

Yeah, the Journal kinda-sorta beats around the bush at the very end of its article: “Even with U.S. oil prices topping $120 earlier this year, companies have remained committed to returning mountains of cash to shareholders in the form of dividends and buybacks rather than reinvesting it in production.”

Alas, the Journal begs the question of why the industry chooses to do so.

Why isn’t the industry investing in the future? Could it be that it doesn’t see a future — or that Washington and Wall Street keep saying it has no future?

“Well, no,” Byron answers his own question. “Not when there’s political and cultural hatred toward oil and the traditional energy industry.”

In a recent internal email, Byron laid out three reasons the industry isn’t investing in the future…

And so the industry is responding logically to incentives that are far stronger than the rising price they can command for their product.

It’s Byron’s analysis, by the way, that’s done much to inform Jim Rickards’ “Cold Cover-Up” forecast. In short, America is in for an energy crisis that will make the 1970s look like child’s play.

Are you and your family prepared? “If you haven’t yet purchased a portable generator and have fuel in storage,” says Jim, “then I recommend you do so now.” (This is guidance your managing editor has already taken to heart.)

Beyond that, you need to prepare your portfolio for what’s coming — which is what Jim’s Emergency Election Briefing – Road to Ruin was all about.

Jim convened this session less than 48 hours ago… and with the election underway now, the full truth of the “Cold Cover-Up” is about to come to the fore. We urge you to click and watch immediately while the information is still current.

Back to the accountability issue: Don’t expect a Republican Congress to hold the Biden administration’s feet to the fire for this debacle.

But their purpose will not be to ensure accountability — or, God forbid, to actually solve the energy crisis. The purpose will be to gin up outrage going into the 2024 elections.

That’s how it worked when Nancy Pelosi and the Democrats swept Congress in 2006, on the back of public revulsion with the Iraq War.

No sooner was the election over than Pelosi said, “Impeachment is off the table.” In addition, she marshaled the support of House Democrats to beef up the funding for Dubya Bush’s war.

Why would she do that? Because she knew that if individuals were held accountable for starting the war under false pretenses and the war came to an end for lack of funds… well, the Democrats wouldn’t be able to run against the war in the 2008 presidential race, would they?

So the war had to continue for the sake of partisan politics. The fact another 1,200-plus American troops and God-knows-how-many Iraqi civilians would die in 2007 and 2008? Can’t make an omelet without breaking a few eggs, right? (And once in the White House, the Dems continued the war for 2½ more years.)

We expect no different outcome with a Republican Congress and the energy crisis.

Sorry if we’re bursting your partisan bubble… but we draw a through line today between Iraq and Epstein and the energy crisis to remind you that your limited time and resources are best devoted to matters that are actually within your control.

And you can take steps in your portfolio to brace for the fallout of “Biden’s Cold Cover-Up” — including a trade that could 15X your money in the next 90 days. But you won’t know how if you don’t watch now.

To the markets today, where the big story is in… crypto? 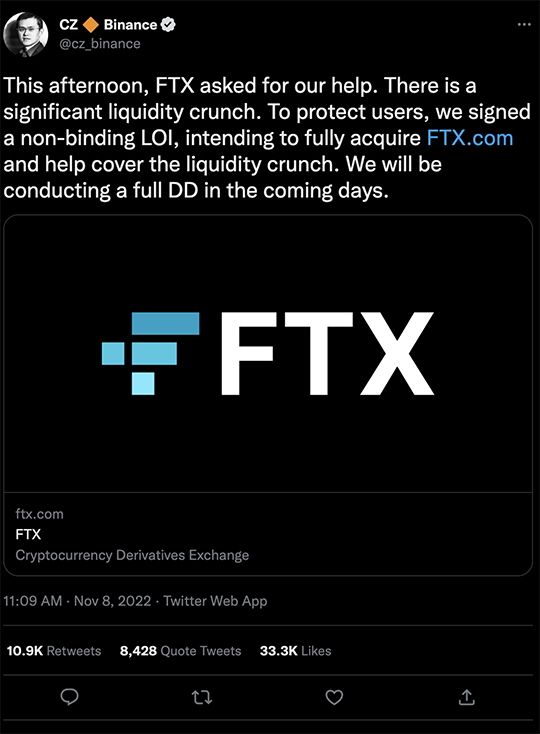 On our internal company chat, Jim Rickards’ senior analyst Dan Amoss points out the letter of intent is “nonbinding” — and that Binance has yet to perform its due diligence.

So we still don’t really know anything — other than FTX’s boy-wonder founder Sam Bankman-Fried has probably lost control of his baby. “My take, FTX was about to fail,” tweets Bianco Research chief Jim Bianco. “So SBF gave FTX to Binance for probably $1 and the assumption of liabilities.”

Quite the fall from grace — nine months after FTX’s Super Bowl commercial featuring Larry David. (Oh, and will it be Binance’s name on all the baseball umpires’ sleeves next year?)

Before the news broke, the contagion had dragged down most of the major cryptos a good 7–8% on the day. At last check, they’ve recovered most of those losses — Bitcoin at $20,479 and Ethereum at $1,560.

Small-business owners are having no better luck making sense of this weird economy than anyone else.

The National Federation of Independent Business is out with its monthly optimism index. At 91.3, the figure has now logged 10 straight months below its long-term average. And we do mean long term; the survey has a history going back nearly 50 years.

“Owners continue to show a dismal view about future sales growth and business conditions, but are still looking to hire new workers,” says NFIB Chief Economist Bill Dunkelberg. “Inflation, supply chain disruptions and labor shortages continue to limit the ability of many small businesses to meet the demand for their products and services.”

Fully one-third of survey respondents — 33% — cite inflation as their single-most important problem. (That said, the number was even higher earlier this year.) Meanwhile, good help is still hard to find; “quality of labor” is in second place, cited by 23%. Taxes are a distant third at 12%, followed by labor costs at 10%.

Western economic sanctions against Russia have been so ham-handed that you, dear taxpayer, are footing the upkeep costs of those Russian oligarchs’ yachts. 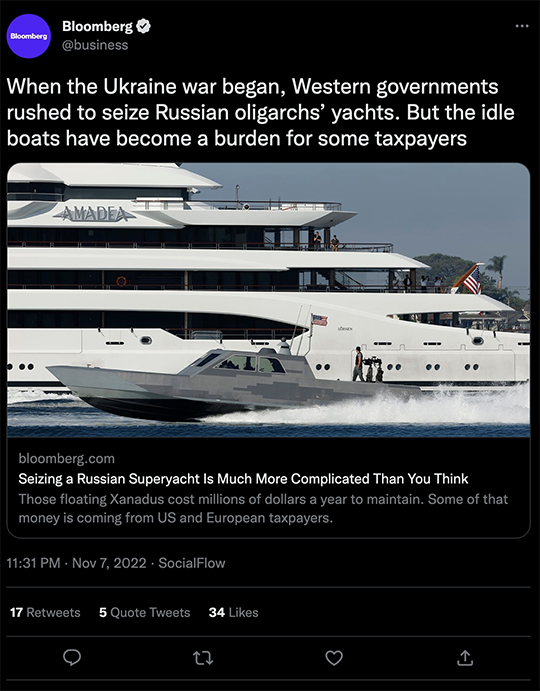 Ah, the yachts. At the outset of the Russia-Ukraine war, the yachts were perhaps the most visible and symbolic manifestations of Putin’s perfidy — the ill-gotten gains of all his rich cronies. Seizing them was an easy PR win for Western governments to placate the woke hordes on Twitter.

But because it’s governments we’re talking about, no one bothered to ask, “And then what?”

Months later, “most of the ships sit immobilized, draining money,” reports Businessweek — er, Bloomberg Businessweek. (We have our own oligarchs, no?)

“In some places, but not all, that money is coming from taxpayers. It can cost 10–15% of a yacht’s value to keep it running every year — a ‘vanity tax’ for the wealthy is how one lawyer describes it.

“Yachts are less expensive to maintain when they’re not cruising at sea. But even using an ultraconservative estimate of 3% of a ship’s value, the U.S. and Italian governments will pay more than $50 million a year to maintain their fleets of arrested megayachts.”

About $10 million of that will go for one vessel — the $325 million superyacht Amadea, moored in San Diego.

“Selling these things is hard because who wants a yacht that’s been seized? It’s kryptonite for buyers,” says the Jalopnik website, playing off Bloomberg’s story.

Speaking off the cuff at a seminar last summer, Joe Biden’s national security adviser Jake Sullivan sounded gobsmacked by the whole phenomenon: “You know what the craziest thing is? When we seize one, we have to pay for upkeep. Some people are basically being paid to maintain Russian superyachts on behalf of the United States government.” 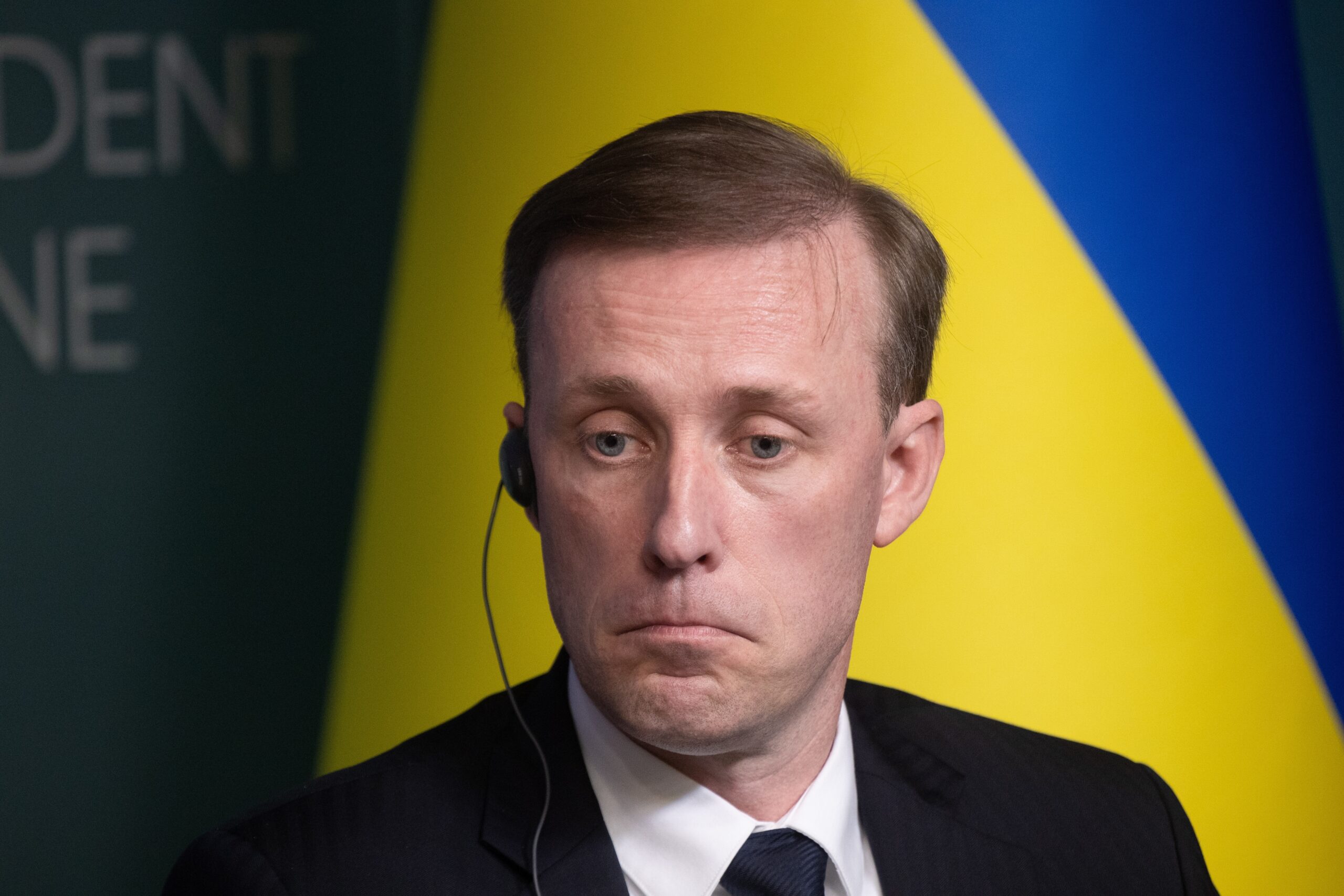 We have an idea: How about docking a portion of Sullivan’s pay for the yachts’ upkeep? We don’t know his current salary, but when crazy John Bolton held the job under Trump, he was pulling down $183,000 a year.

That would be accountability.