In recent days, one of the factors propelling global stock markets higher is a narrative that China is about to ease up in a big way on its fanatical “zero COVID” policy. 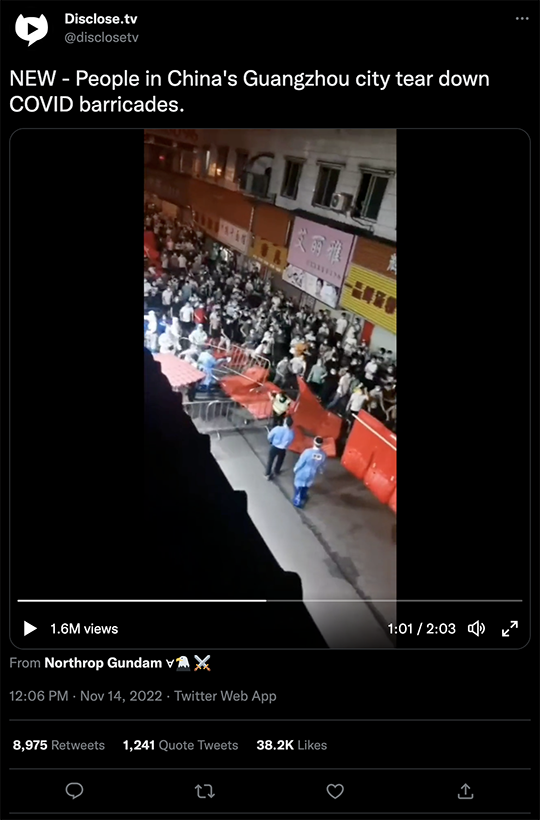 Crowds of people broke out of lockdown at their high-rise and fought with police. “Dramatic footage shows some overturning a police vehicle and tearing down COVID control barriers,” says the BBC. “Riot teams have now been deployed in the area…

“The area is home to many poorer itinerant laborers. They have complained of not being paid if they are unable to turn up for work, and of food shortages and skyrocketing prices while living under COVID control measures.”

Hmmm… a few more incidents like this and the Chinese Communist Party may have no choice but to relent on Zero COVID.

Even the most dictatorial regimes rely to some extent on the consent of the governed — or, to give a nod to Chinese history and culture, the “Mandate of Heaven.”

Perhaps with that in mind, the city of Shijiazhuang — population 11 million — just dropped its COVID testing requirements for people who want to ride the subway.

“It feels like the old playbook is no longer valid, but it’s by no means clear what the new one is,” tweets Gabriel Corsetti — an Italian living and blogging in Beijing since 2008. “Beijing had over 400 cases yesterday, but the city’s still essentially open.”

“It’s not a stretch to say the COVID lockdowns are testing the consent of the governed,” says Chris Scott — Paradigm’s own fluent-in-Mandarin China hand, now back stateside and a member of Jim Rickards’ research team.

“There has been a widespread revival in skepticism — even outright mockery — of the CCP’s rule among groups of Chinese that have either been subjected to the harshest lockdowns, or have experienced post-pandemic life abroad,” he says on an internal company chat.

“As evidence of this, protesters across the country, in the streets and online, have borrowed the lyrics of an old propaganda song — ‘Without the Communist Party, There Would Be No New China,’ — to blame, instead of thank, the CCP for their current predicament.

“Zero COVID is not sustainable politically, which supports the thesis that leaders in Beijing have no choice but to open up, however messy that will be.”

So it can only get better from here for the Chinese economy, right? And for the global economy that’s so interconnected with China’s, right?

“Even if the virus mysteriously disappeared, China would still face a real estate collapse, a demographic collapse, an acute dollar shortage and the effects of decoupling from the U.S. including bans on high-tech equipment and semiconductors to Chinese industry.

“In some ways, the pandemic is just a smoke screen for what is an epic economic collapse. The current rally in Chinese large-cap stocks (in hopes of a post-COVID rebound) is just another sucker rally in the midst of a long-term downtrend.”

But no, the economic situation is no better in the United States, really. “The U.S. economy continues to hurl toward a severe recession,” says Jim, “with the added possibility of a global liquidity crisis worse than the one that struck in 2008.

But even amid the recent turbulence, readers of Jim’s premium advisory Rickards’ Insider Intel are collecting big, consistent gains. Just yesterday, they bagged gains playing options on precious metals miners of 83%… 107.6%… 248.2%… and 307.1%.

Yes, four huge winners in one day. On two of them, the holding time was a mere two weeks. On the other two, less than four weeks. And plenty more similar opportunities are on the way while recession sets in — as Jim explains in this urgent update you can see right here.

In the meantime, though, Mr. Market clings to the Fed “pivot” narrative — even if it’s failed him repeatedly since late summer.

The latest catalyst is the October wholesale inflation numbers out this morning. They rang in less than expected — up 0.2% month-over-month and 8% year-over-year. If you strip out food and energy, the month-to-month figure was flat.

None of this will alter the fact that the Federal Reserve will still raise short-term interest rates another half percentage point at the conclusion of its next meeting on Dec. 14.

Apart from producer prices, the other economic number of the day is the Fed’s Empire State survey, the first so-far-in November indicator: Manufacturing in New York state is growing again after three straight months of contraction.

The flagship cryptos are holding up respectably — Bitcoin just below $17,000 and Ethereum at $1,264 — as we await the next shoe to drop on the FTX saga.

The New York Times managed to secure an interview with FTX co-founder Sam Bankman-Fried — speaking from a location he didn’t care to disclose.

Actually, “SBF” didn’t disclose much at all during the interview. He certainly didn’t shed light on what the NYT describes as “the central questions swirling around him: whether FTX improperly used billions of dollars of customer funds to prop up a trading firm that he also founded, Alameda Research.”

All he’d cop to was that he spread himself too thin to notice what was going on in his core businesses: “Had I been a bit more concentrated on what I was doing, I would have been able to be more thorough.”

We pause for a bit of comic relief… 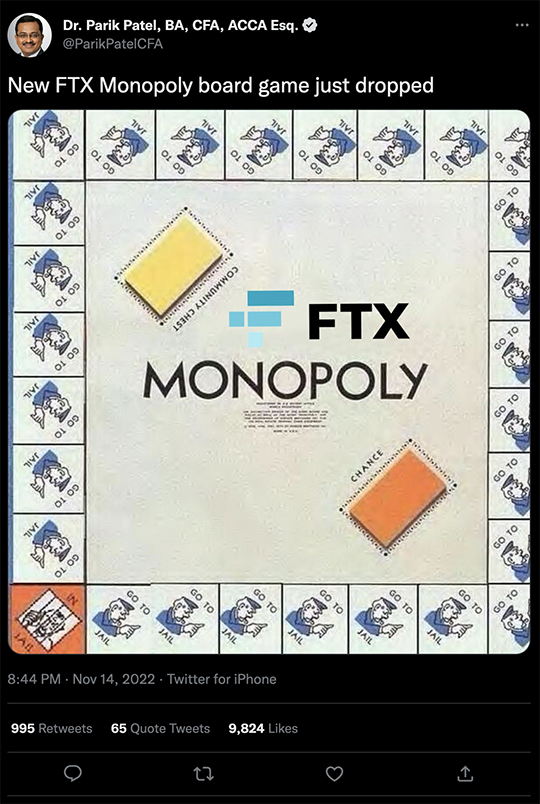 Meanwhile, the New York Post suggests that many major names of folks who got taken in by SBF have yet to be revealed…

“This is like a Madoff situation … almost everyone in tech and Hollywood invested in this thing,” one investor close to FTX told The Post. “Now no one wants to admit to it.”

Elsewhere, our worst fears about what the FTX/SBF saga spells for DeFi or decentralized finance are coming to life.

Asked about the FTX collapse and the prospect of new regulations yesterday, Federal Reserve Vice Chair Lael Brainard said, “Despite a lot of hype — you heard a lot about how decentralized these markets are and how innovative and different — it turns out they’re highly concentrated, highly interconnected, and you’re just seeing a domino effect: Failures from one platform or one firm spilling over elsewhere.”

Brainard betrays an utter ignorance of the distinction between big single-point-of-failure centralized exchanges like FTX on the one hand… and resilient, widely distributed DeFi on the other.

For her, it all comes under the rubric of this weird, alien thing called “crypto” that she doesn’t understand and doesn’t want to understand. All she knows is she wants to squash the whole thing like a bug — or at the very least, regulate it all the same.

On a related note, we’re seeing increasing chatter in the crypto community about SBF’s fervent support on Capitol Hill this past summer for legislation that would have crippled DeFi: In this telling, all his lobbying and campaign contributions were in fact a Hail Mary attempt to save a business he knew was already in danger of collapse.

Hey, sounds plausible to us. To be continued…

Before the news gets too old and moldy, we have to pipe up once more about the mob-like threat the president issued to Elon Musk last week.

As you might recall, a reporter asked Joe Biden, “Do you think Elon Musk is a threat to U.S. national security?” The question was premised largely on Saudi Arabian investors in Twitter.

Biden could have done the circumspect thing and say, “That’s a question for bodies like the Justice Department and the Committee on Foreign Investment in the United States to review. I’m the leader of the executive branch and it would be an abuse of power for me to say anything at this time.”

Instead he said, “I think that Elon Musk’s cooperation and/or technical relationships with other countries is worthy of being looked at.”

The part about sic ’em! was merely implied.

As the independent journalist Matt Taibbi writes on his Substack site, the question — posed by Bloomberg reporter Jenny Leonard — was disingenuous. “Musk’s supposed partner-in-crime, Prince Alwaleed bin Talal of Saudi Arabia, has long been one of Twitter’s largest shareholders, having invested $300 million back in 2011.”

But the question was an easy “in” for the president to take a swipe at Musk, the day after Musk tweeted, “I recommend voting for a Republican Congress.”

[Disclaimer for any reader with a Democratic axe to grind: We didn’t much care for Donald Trump tweeting his disapproval of corporate CEOs either. Hell, we were denouncing it even before he took office.]

“Hey Dave — just a personal note of thanks,” says an appreciative reader.

“Twice you printed in full my comments regarding Ayn Rand and Atlas Shrugged. Clearly, this is a subject we disagree on and yet you gave me space to present and then clarify my view.

“This is a pretty good example of why I and so many others love The 5.

“Happy Thanksgiving to you and all at The 5.”

The 5: Happy to oblige. It was a good dialogue.

On a sort-of related note… I didn’t realize until after publishing yesterday, but in the ridiculous slobber-job of an article that Sequoia Capital published about Sam Bankman-Fried in September, SBF is quoted as saying, “I would never read a book. I’m very skeptical of books… I think, if you wrote a book, you ****ed up, and it should have been a six-paragraph blog post.”

Which puts an interesting spin on the description of SBF as a sociopath.

My wife — a retired librarian — tells me there’s research showing that people who don’t read books, particularly fiction, have less empathy than those who do.

“Reading novels enables us to become better at actually understanding other people and what they’re up to,” says novelist and University of Toronto psych professor Keith Oatley — who published a study on the phenomenon in 2006. “Reading fiction enables you to sample across a much wider range of possible people and come to understand something about the differences among them,” he told Discover magazine in 2020.

Your editor admittedly doesn’t read enough fiction. At the very least, I should reread a Robert B. Parker mystery like once every few months or something. Loved ’em all when I was younger…