The Republicans are *this* close to winning the U.S. House as we write — one more seat away from securing a majority of 218.

We’ll leave it to others today to debate why, in an allegedly first-world country, it takes more than a week to count all the votes in seven California districts.

Already, the cry has gone up from the Democrats’ ranks: “Republicans Could Use Debt Limit to Force Social Security Cuts,” says a Huffington Post headline.

Barring some sort of agreement under the current lame-duck Congress, the debt ceiling will be a renewed source of “partisan rancor” sometime in 2023.

From Roll Call: “Democrats are hoping to avoid a battle next year with a Republican-controlled House eager to use the opportunity to restrict future government spending, including possibly through caps, overhauls to the budgeting process or changes to mandatory spending like Social Security or Medicare. A prolonged fight on the debt limit could roil financial markets, or worse if Congress fails to act before Treasury hits the ceiling.”

Our bold prediction: There might well be a fight in 2023… but it will end in bipartisan agreement on the most sweeping changes to Social Security in 40 years.

There’s precedent: In 1983, President Reagan came to terms with House Speaker Thomas “Tip” O’Neill (D-Massachusetts) on the biggest overhaul to Social Security since the program’s inception in the 1930s… 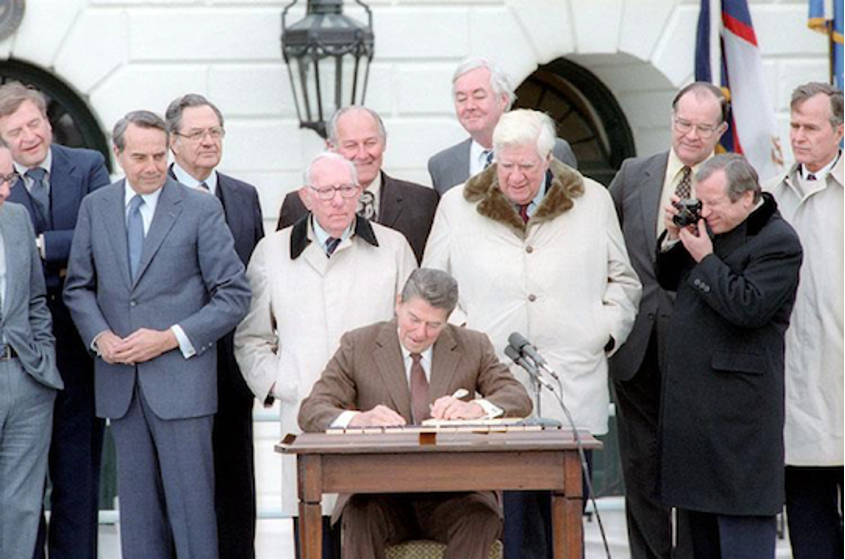 The outlines of the 2023 Social Security reforms are already coming into view.

For several years now, Democrats have proposed their own overhaul to Social Security: Nearly every Democrat in the House co-sponsored the bill in 2021.

As we discussed here last year, two things stood out about the measure…

How to pay for it? A tax increase, of course — one that would fundamentally change the original bargain of the Social Security program.

Under present law, any income you earn over $147,000 this year isn’t subject to payroll tax. But the Democrats’ bill would reapply payroll tax on pay of $400,000 and up.

The “doughnut hole” built into this proposal would shrink over time and eventually go away completely. If you’re a higher earner, you know that $147,000 cap rises every year; next year, it’s $160,200.

As we’ve observed before, this change would transform Social Security from a social-insurance scheme into just another welfare giveaway. That’s because the higher taxes you’d pay during your working years would not translate to higher benefits in retirement.

“In a required-savings program, there is a reasonably close relationship between taxes paid and benefits received, while in an income-redistribution program this relationship is not close,” Baylor business professor emeritus William Reichenstein explained to Reuters in 2019.

The Republicans, for their part, are sure to push for jacking up full retirement age. The chatter in Washington is about raising it to 70, the better to shore up Social Security’s shaky finances.

Which, make no mistake, would amount to a cut in benefits. “It raises the bar on how long workers must wait to receive 100% of their benefits,” Reuters columnist Mark Miller wrote in 2019.

In a bipartisan compromise, Republicans would probably relent on raising full retirement age to 70. If the politicos follow the playbook of the 1983 reforms… it would jump to 68 for those born between 1983⁠–1994, gradually rising to 69 for those born in 2000 or later.

So there you have the outlines of the biggest overhaul for Social Security in 40 years.

Put together, these reforms would be more than enough to “kick the can” on the date the Social Security trust fund would be depleted. At present, Social Security’s actuaries forecast that date to be 2035. With no reforms, benefits would then have to be cut by 20⁠–25%.

But with reforms — a combination of tax increases and a higher retirement age — that date could be pushed out two or three decades, maybe more.

Contrary to what Xers and millennials thought from a young age — your early-wave Xer editor included — Social Security will be there, just not in its current form. It’s fixable — which is a helluva lot more than you can say for Medicare. But that’s a subject for another day.

[Special note if you’re over 62 and collecting Social Security right now: Yes, you’re getting an 8.7% cost-of-living increase next year. But there’s no guarantee that will be enough to keep up with galloping inflation.

No, if you want to keep ahead of inflation in your golden years, you’re going to have to put a plan into action with your hard-earned savings. Fortunately our income-and-retirement specialist Zach Scheidt has drawn up the ideal blueprint — which you can review for yourself at this link.]

To the markets… where it’s the best of times and the worst of times in retail.

Actually, no — it’s bad all around.

Retail sales as measured by the Census Bureau came in better than expected for October — up 1.3% over September. If you strip out auto sales (volatile month-to-month) and gasoline sales (rising gas prices can skew the overall figure) the jump was still 0.9% — way better than the expected 0.2%

All good, right? Problem is, late yesterday the New York Fed issued its quarterly consumer-credit numbers. Credit card debt soared to $930 billion during the third quarter — up 15% in 12 months, the biggest annual jump in over 20 years.

In other words, people are spending out of an empty pocket. That will do nothing to persuade the Federal Reserve to “pivot” anytime soon to a looser monetary policy.

Meanwhile, Target reported this morning that its profits are down and warned its holiday season will be something less than merry and bright; as we write, TGT shares are down 12% on the day.

(And what the heck is with TGT’s disclosure that its profit margins took a $400 million hit from “organized retail theft”?)

And so a mild sell-off is underway on Wall Street.

There’s no new bombshell headline related to the implosion of FTX and its co-founder Sam Bankman-Fried. That said, the CEO of Coinbase has a good hot take on The New York Times and its softball interview with SBF we mentioned yesterday — you know, the one that broke no news whatsoever… 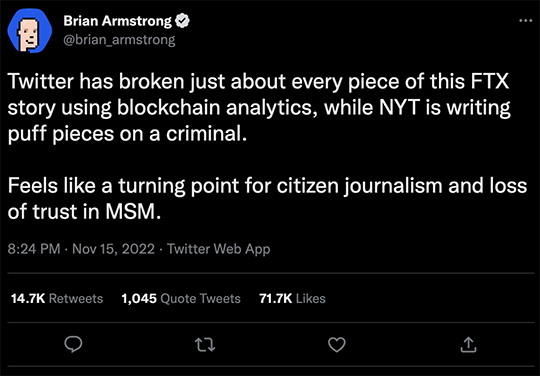 And we ran across a pretty decent meme… 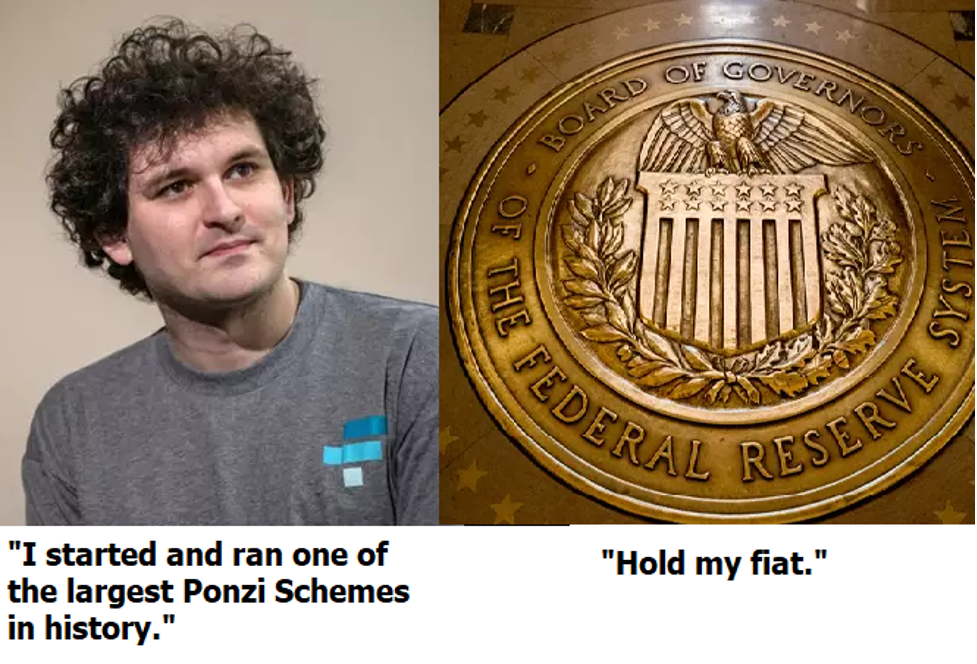 ➢One other economic number of note: Industrial production as measured by the Federal Reserve fell 0.1% in October — in contrast with the “expert consensus” expecting a 0.2% jump. All told, 79.9% of America’s industrial capacity was in use last month — slightly more than the 50-year average of 79.6%.

To the mailbag, and an email we must truncate — prefacing it by saying the reader has concerns about election shenanigans and the FTX connection to Ukraine.

[We might address the Ukraine angle on FTX tomorrow, time permitting…]

“But my concern today is bigger than any of that — big as it is. Janet Yellen, who is not the incompetent boob she appears, is off arm-twisting the Indians. Not for the reasons we are being told, to get them on board with oil price caps, but because next to the Saudis, they are the biggest threat to end the dollar as the world’s reserve currency.

“Biden’s visit earlier this year to Saudi Arabia was designed to threaten them about ending the petrodollar, which is the foundation of the reserve status of the dollar and its creation predated it by a year. A trip about ‘human rights’ violations hardly warranted a presidential visit, after all.

“Simultaneously, a Wall Street financial expert warns us that the dollar is coming to an end… in 20 or 30 years. The BRICS are gathering momentum at a faster pace than anyone realizes, because our sanctions have destroyed confidence in our good intentions. I put the 30-year warning alongside ‘Hey, is that a blimp?’-type distractions.

“I note that the dollar has dropped 7% against the Swiss franc and 4–5% against other key currencies since the election. Just saying.

“Love The 5, never miss it. I have great confidence in all your contributors.”

The 5: So yeah — this was already on our radar. Thanks for spurring us to follow up.

As we mentioned last Wednesday, the foreign ministers of India and Russia met in Moscow — and India reaffirmed its commitment to keep buying Russian oil.

India is the world’s third-biggest oil consumer after America and China. Before Russia invaded Ukraine, India imported about 2% of its oil from Russia. Now it’s about 23%.

Now as you might recall, Washington and its Western allies hope to impose a harebrained “price cap” scheme on Russian oil effective Dec. 5 — aiming to limit Moscow’s oil revenue.

Clearly, India is in no mood to cooperate.

Enter Treasury Secretary Janet Yellen: Last Friday, she said India is welcome to continue buying Russian oil at whatever price it likes — as long as it doesn’t do so with Western insurance, financing or shipping.

Yes, India can probably make other arrangements — so Yellen’s threat is as toothless as the price-cap scheme is brainless.

Here’s a Reuters story from September: “The Indian government said on Monday that it had discussed the feasibility of institutionalizing rupee-riyal trade with its South Arabian counterpart.” that is, bypassing the dollar.

Yes, the BRICS are shaping up to be an entente of countries trying to get out from under the dollar’s thumb. They will surely succeed in a timeframe of under 20⁠–30 years.

But as always, we caution that inevitable events aren’t necessarily imminent. Regardless, we’ll stay on top of it…

Last, a member of our Omega Wealth Circle weighs in on the subject of reading and empathy…

“Not only do nonreaders tend to have less empathy, they also have much less understanding of history.

“Harry Truman once noted that ‘There’s nothing new in the world except the history you don’t know.’ By that standard, most of our politicians seem to find everything new.

“And this applies to both sides of the aisle. Donald Trump is noted for not being a reader, much as SBF was also quoted.”

The 5: Doggone it, we thought we could get through today’s edition without mentioning Donald Trump, and there you have to blow it for us right at the end!