“As the anti-American rhetoric soared, the crowd applauded, jeered and whistled,” says a Financial Times dispatch from Leipzig, Germany. 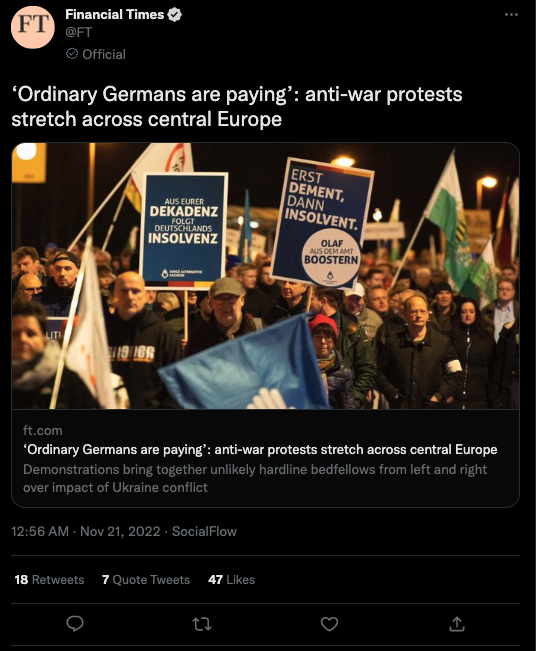 Periodic protests have sprung up around Europe since September. They just haven’t gotten mainstream attention because they don’t fit the mainstream #StandWithUkraine narrative.

Now, however, the power elite’s salmon-colored rag has started wringing its hands: The rallies “point to a worrying trend for the region’s political mainstream.

“In Germany, some protests have been organised by the radical left and some by the populist right, in a sign of how a deepening economic crisis, conflicted historical heritage and complex relationship with Russia are dissolving traditional political rivalries and fusing new movements opposed to the status quo.”

Most striking is where the protesters lay blame — at the feet of leaders in Washington, D.C.

“Ordinary Germans are paying because America wants to interfere in Russia,” said David — an unemployed man who traveled 85 miles south from Brandenburg.

“We want NATO warmongers to stop creating a conflict between Germany and Russia, between Ukraine and Russia,” said a retiree named Sabine. “We want normalised gas and electricity prices.”

“The embargo policy against Russia has failed completely and is being directed catastrophically against ourselves,” said a speaker at the rally — calling the Russia-Ukraine war a “paradise” for “warmongers, arms companies and profiteers.”

Clearly this crowd has no patience for leaders like the former finance minister Wolfgang Schäuble — who told his countrymen last month to stop “whining” and “put on a sweater.”

Germany’s power elite is noticing these protests — and laying the groundwork for a severe crackdown.

Begin with this Reuters article dated a week ago Monday: “German authorities are stepping up preparations for emergency cash deliveries in case of a blackout to keep the economy running…  as the nation braces for possible power cuts arising from the war in Ukraine.

“The plans include the Bundesbank, Germany’s central bank, hoarding extra billions to cope with a surge in demand, and possible limits on withdrawals.” [Emphasis ours]

Unlike Americans and many Europeans, Germans still have a fondness for physical cash: The country’s central bank estimates that the typical German withdraws 6,600 euros from ATMs every year. At the current exchange rate, that translates to about $570 a month!

“Cash offers a kind of freedom,” Paradigm Press Group’s Jim Rickards reminds us. For the most part, it’s untraceable and anonymous.

“It’s not perfect, but it’s much better than credit cards, debit cards, wire transfers and other digital payment channels if you want to avoid government interference.”

[Which — at the risk of repeating ourselves — is why Jim is so concerned about plans in the United States for a central bank digital currency (CBDC), or as he styles it, “Biden Bucks.”]

When the lights go out, “Germans are going to run to the ATMs,” Jim goes on.

“They know that in case of blackouts, credit cards don’t work, gas pumps don’t work, etc. But cash does work. It allows people to go down to the store to buy some food for their families or whatever might be needed.”

But if withdrawals are limited — as the German authorities are considering?

“Your money in the bank is not ‘your money,’” Jim reminds us. “It’s controlled by the bank, which will ration how much you can have.

“Armored cars that move cash are asking for extra security because they expect to be attacked and looted by cash-starved citizens. While Plan A is still to eliminate cash, Plan B is to limit what you can do with cash if you happen to have any.

“It all points to ways governments will use money to control behavior. What governments are missing is that if money is not available, people will riot, loot and burn down the banks until they get some. That has happened in Lebanon recently. It’s coming to Germany and the rest of the EU.”

And the mainstream won’t be able to suppress it. Remember you heard it here first.

To the markets — which are keeping a nervous eye on both China and the Federal Reserve.

Later today, the Fed will publish the minutes from its meeting earlier this month. As a reminder, Fed “minutes” aren’t like the minutes from your local school board meeting. They’re not an objective record of who said what; they’re a thoroughly political document crafted to generate a desired response in the markets.

If there’s anything in there today suggesting the Fed might jack up short-term interest rates another three-quarters of a percentage point next month — and not the half point already priced into the stock market — it would severely violate Wall Street’s expectations and trigger a sell-off.

And speaking of expectations being violated… 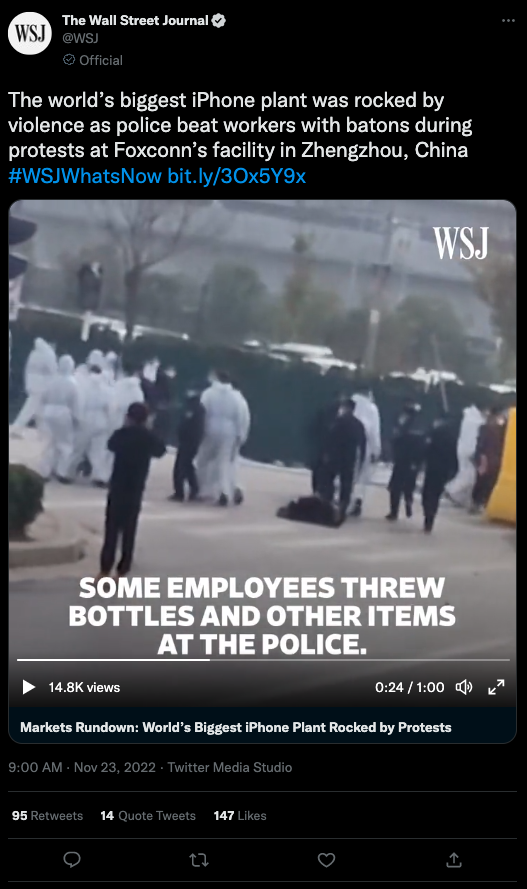 The trouble began when workers who’ve been essentially locked inside the factory for weeks were told their promised bonuses wouldn’t come through on schedule.

We’ll concede that even we got sucked in a bit last week by Wall Street’s “China will soon ease up on zero-COVID” narrative.

But the reality is that “China is seeing a record level of lockdowns,” Nomura’s chief China economist Ting Lu tells the Financial Times. “It’s even a bit worse than during the [spring] Shanghai lockdown.”

“Beijing is in a tough position,” tweets Peking University finance professor Michael Pettis, a longtime China hand. “If they maintain zero-COVID, the economy will continue to contract in a self-reinforcing way. If they relax, the COVID case load will explode far beyond the capacity of the country’s limited medical staffing.”

Right now, the government continues clamping down… and the great Chinese engine of global economic growth keeps slowing down.

Precious metals are little moved — gold at $1,743 and silver at $21.31. Crude is selling off hard after the Energy Department’s weekly inventory numbers, a barrel of West Texas Intermediate off nearly four bucks to $77.06.

One major economic report today is decidedly recessionary: The “flash PMI” sank from 48.2 in October to 46.3 this month. Worse, the manufacturing component of this report fell below the 50-point dividing line between a growing factory sector and a shrinking one — clocking in way below expectations at 47.6. Services slipped even further into contraction territory at 46.1.

But the other major report is far less recessionary: Durable goods orders — orders for anything designed to last three years or longer — rose 1% in October, way more than expected. And if you strip out the volatile categories of aircraft and military gear, that too surprised bigly on the upside, rising 0.7%. Unfortunately, September’s already-glum numbers were revised further down.

The rumored demise of Genesis Global Capital, mentioned here on Monday, has been postponed — at least long enough for the firm to bring in investment bank Moelis & Co. to explore “potential courses of action.”

Meanwhile, FTX cofounder Sam Bankman-Fried is still on the agenda for The New York Times’ DealBook Summit set for one week from tonight.

If he’s actually going to speak — remotely, from a secure undisclosed location in the Bahamas, we presume — that would go a long way to explain the NYT’s softball interview with him shortly after FTX filed for bankruptcy.

Really, it’s not just the Times: Much of the media has been oddly solicitous of SBF, including The Washington Post. What gives?

“These are both outlets that have sounded quasi-apocalyptic notes about how tech companies like Facebook and Twitter are ruining journalism, promoting misinformation, and undermining democracy,” points out Reason writer Robby Soave. One hopes they wouldn’t treat Bankman-Fried with kid gloves out of admiration for his philanthropy.”

One hopes… but on the other hand, SBF gave millions to media outlets like ProPublica, Vox and The Intercept. That’s a big deal at a time when the media’s audiences and budgets are both shrinking.

Back to the DealBook Summit. The whole thing has inspired some amusing Photoshoppery riffing on the NYT’s webpage listing the speakers… 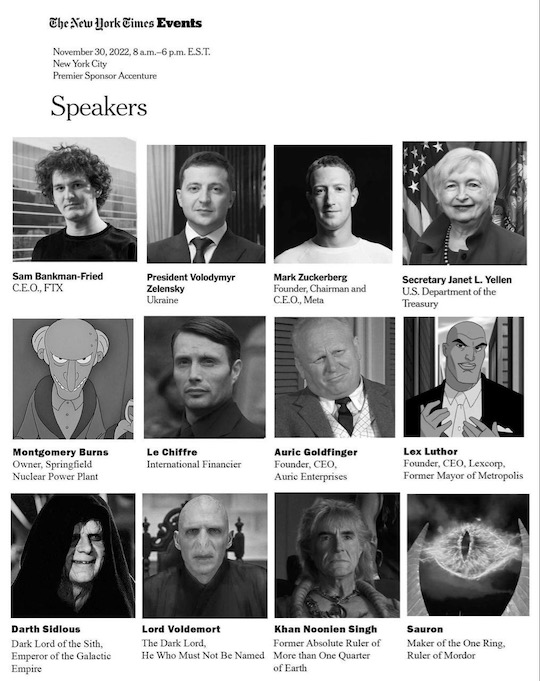 We’re a little bummed Dr. Evil wasn’t included. “Why make trillions when we could make… billions?”

“Just a note to say thank you for all you do at The 5. I love to read through your missives daily,” writes an appreciative reader. “You cover a wide range of topics and keep us on top of things.

The 5: Fooled us good! Thanks for a little pre-holiday cheer.

P.S. It’s been a longstanding tradition that we don’t publish The 5 on either Thursday or Friday of Thanksgiving weekend. But this year, we’re switching it up.

Tomorrow while the turkey is in the oven, you can settle in for a special guest essay spotlighting the most important investing trend of the 2020s — and why it’s not too late to get on board. Then on Friday, I’ll be back to spotlight the recent sentencing of Theranos founder Elizabeth Holmes. How “guilty” is she, really, compared with the rest of American business culture?