Surviving the Energy Crisis of 2023

“So far, the Biden solution to oil supply shortfalls has been its profligate release of oil from the U.S. Strategic Petroleum Reserve (SPR),” says Paradigm’s geologist and mining expert Byron King — joining us today with the next round of our team’s 2023 predictions.

The history of the U.S. SPR harkens back to the energy-starved days of the 1970s when, in 1975, Gerald Ford signed the Energy Policy and Conservation Act for the establishment of oil stockpiles along the Texas and Louisiana Gulf Coast. 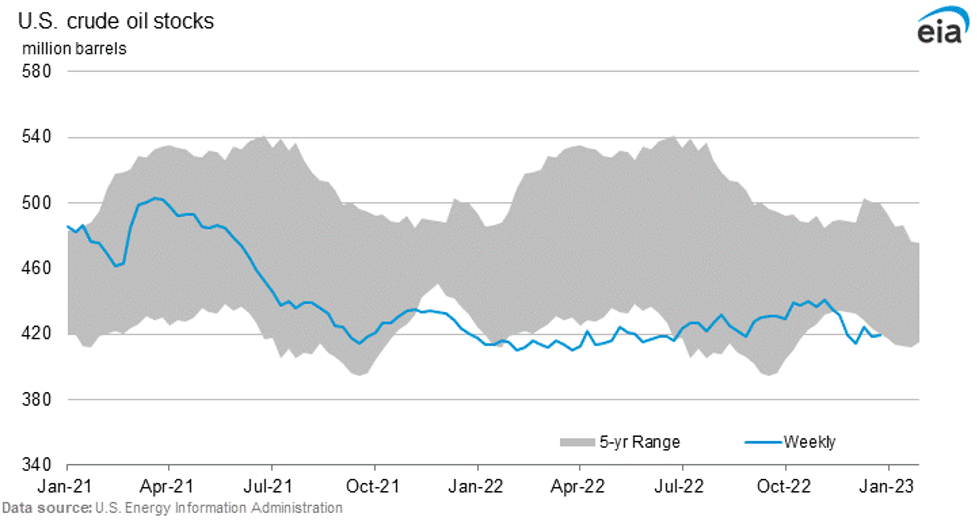 At last count on Dec. 23, the SPR stockpile had dwindled to 419 million barrels of crude oil; in terms of the number of days the U.S. could continue to function on SPR oil alone, well, that’s just about three weeks.

“And it’s worth noting that well over 15% of that oil has been exported to refiners in Europe and China, so it’s not as if it’s all happening just to make life better for Americans,” Byron says.

“Right now, the SPR is at low levels not seen since 1984,” he adds. “Meanwhile, you’ve doubtless seen accounts of how U.S. policymakers have all but begged the Saudis to produce more oil (Saudis said, ‘Nope’), and more recently the U.S. is cozying up to Venezuela to obtain more oil.

“Good luck with all that,” Byron says. “Now let’s do some forecasting and focus on the theme of energy.” First and foremost?

“That is, from top to bottom, the policy diktat within the U.S. government is… to throw U.S. money, tax breaks and political support to anything that promises energy from the sky, especially solar and windmills.

“Keep in mind that there’s nothing much renewable about ‘renewables,’” he notes. Indeed, sunshine and wind are free — however unreliable — “but this free stuff comes only after a significant, expensive, energy-dense buildout of equipment and systems that require real stuff.

“In terms of investment return,” says Byron, “the good news is that there’s money yet to be made in the so-called renewable energy space, especially as it concerns minerals, elements and critical materials,” he says. “[We] are on the cusp of creating (or recreating) entire new industries in the mining, minerals and refining sectors,” he asserts. (More on that later.)

“The super-high euro price of natural gas across the Atlantic Ocean is blowing back into [the U.S.] economy,” Byron says.

“We’ll be lucky if the winter ahead is moderate, let alone mild,” says Byron… who resides in chilly Pittsburgh. “But whether it’s not-so-bad weather… or brutal cold, you should expect natural gas prices to rise. In this respect, watch your heating and electric bill if you’re on a system that relies on gas.”

Pertaining to economic blowback, Byron connects the dots: “High natgas prices in Europe are attracting every molecule of North American methane that exporters can liquefy as LNG (liquefied natural gas),” he says. The upshot? “Your heating bill might triple from last year.

“As for LNG plays, the biggest one in just the U.S. is Cheniere Energy (LNG), which is already priced up pretty well,” he says. “Internationally, there’s Shell (SHEL) and Total (TTE). Plus, you won’t go wrong, in general, with Chevron (CVX) and Exxon Mobil (XOM)… large companies with extensive gas/LNG operations.

“Finally, a few words on nuclear…

“It would be great if 2023 became the year of the true nuclear revival, but I’ve been waiting for [that] for well over a decade,” says Byron.

“Meanwhile, in 2022, we saw excellent returns from U.S.-focused plays like Uranium Energy Corp. (UEC), whose management team is nothing short of brilliant,” he says. “Speaking of strong management teams, there’s Energy Fuels (UUUU), whose share price more than tripled over the past two years. And keep an eye on Fission Uranium (FCUUF).”

Also in 2022, “Canadian uranium play Cameco (CCJ) bought the old Westinghouse nuclear division, so there’s something happening out there.

“Looking ahead to 2023, I expect the U.S. government to announce a major program to build up a new, strategic reserve of uranium in one form (primary yellowcake) or another (processed metals),” Byron says. “When that news breaks, the uranium plays will… umm… explode, if you’ll excuse the term.”

On the whole, Byron concludes: “It’s 2023, and another one of those intense, disruptive periods in time,” he says. “At least, we can realize that there’s tumult and turmoil out there. And some people — the political ones — are making decisions that affect major capital flows, and, in turn, create business and investment opportunities.

“Get out ahead of the flow, when and where you can. Many new policies are already locked in, and the effects have yet to play out,” Byron says. “But we know they’re coming down the line, so be prepared.”

Near as we can tell, the stock market is having a delayed reaction to the FOMC minutes.

According to The Wall Street Journal’s Nick Timiraos — the Federal Reserve’s preferred media mouthpiece — the minutes include “uncharacteristically blunt words of warning to investors that cautioned against underestimating the central bank’s determination to hold interest rates at higher levels to bring down inflation.” 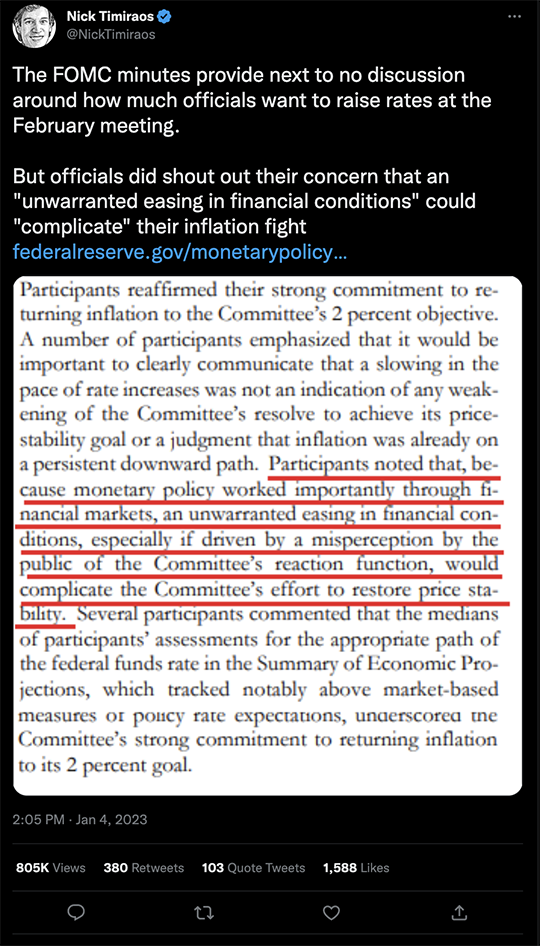 Reminder: Fed “minutes” aren’t like the minutes from your local school board meeting. They’re not an objective record of who said what; they’re a thoroughly political document crafted to generate a desired response in the markets.

And in what has to be a coordinated effort, the IMF’s No. 2 Gita Gopinath also said the Fed can’t take the foot off the accelerator.

So the market’s getting a clue… and, with that, the three major U.S. stock indexes have surrendered yesterday’s gains. Somewhat predictably, the Nasdaq’s leading the way down, having lost 1.30% market cap. At the same time, the Dow and S&P 500 are both in the red by 1.15% to 32,885 and 3,800 respectively.

Paradigm editor Zach Scheidt states his case on inflation in 2023: “Here’s why I think China’s reopening will stoke more inflation for the global economy,” he says. “Chinese consumption has the potential to drive much more global demand.

“China’s population is currently estimated at 1.45 billion people. That’s a massive portion of the world’s total population,” Zach says. “And the standard of living for most Chinese citizens has been improving over the last 20 years, which means Chinese families are buying more products and services on a per capita basis.

“As China moves away from its draconian quarantine and lockdown measures, Chinese citizens will be free to live more normal lives and spend money.

“Think about what happens when 1.45 billion people start buying more stuff,” Zach says. “All of that demand will further exacerbate inflation, a problem that is already plaguing economies around the world,” he notes.

Nevertheless, Zach takes the other side of the argument, too — that China’s reopening could well be deflationary…

“Disruptions to our global supply chain have been a big part of what drove inflation higher [in 2022],” Zach says. “And just about any physical item you buy today has at least some ties to China.

“China’s manufacturing industry covers everything from high-tech computer chips to assembling the holiday presents you buy for your kids or grandkids.

“With supplies of important items like cellphones, apparel, car parts and plenty of other things in limbo, prices naturally surged higher.

“Once China’s economy starts getting back to normal, these supply chain problems will make it easier (and cheaper) for retailers to rebuild inventory for products in high demand.

“We’re already seeing this play out at stores like Target, Walmart and Macy’s. Prices for many consumer items are coming down.”

All things considered, Zach believes the debate about China’s role in global inflation isn’t necessarily black or white; instead, he thinks the argument is more nuanced than that.

“China’s reopening will likely cause higher inflation for raw materials like oil, natural gas and base metals,” he concedes. “That’s because we’ll use more of this stuff as China’s economy gets back up to speed.

“Buying energy producers, industrial metal miners, equipment companies, precious metal miners and even airlines and international resort stocks makes a lot of sense. These are great plays to help you tap into the good side of inflation and build wealth from the opportunities this market gives us.

“Meanwhile, China’s reopening may cause many of the goods we buy to become more affordable,” Zach says. “That’s good news if you’re in the market for a new car, a new laptop or even some new running shoes.

“I’m hopeful that we’ll see prices for these consumer items pull back this year. This pullback may give the Fed some cover to start being less aggressive with its interest rate hikes.

“To be sure, there are still a lot of moving parts and plenty of uncertainty,” Zach closes. “Throughout 2023, we’ll keep a close eye on this inflation debate. My team and I will continue to scour the market for the best ways to protect your wealth and for income plays that give you reliable cash flow.”

Apple has stealthily lobbed a grenade at voice actors: “Apple Books for Authors webpage allows publishers on the Apple Books platform to opt in to have their written books converted into a narrated audio form using AI,” says MacRumors.

With sales of audiobooks raking in about $5 billion in 2022, the industry is expected to grow to $35 billion by 2030. And technology companies are vying to get a leg-up on the trend.

But Apple’s competing with some heavy hitters, including Google, Spotify and, most notably, Amazon, which owns industry leader Audible — which, interestingly enough, stipulates that audiobooks “must be read by humans.”

But in a hush-hush move last year, Apple “approached independent publishers as potential partners,” says The Guardian. “Authors were told that Apple — which at the time was not named as the company behind the technology — would shoulder the costs of production and writers would receive royalties from sales.” 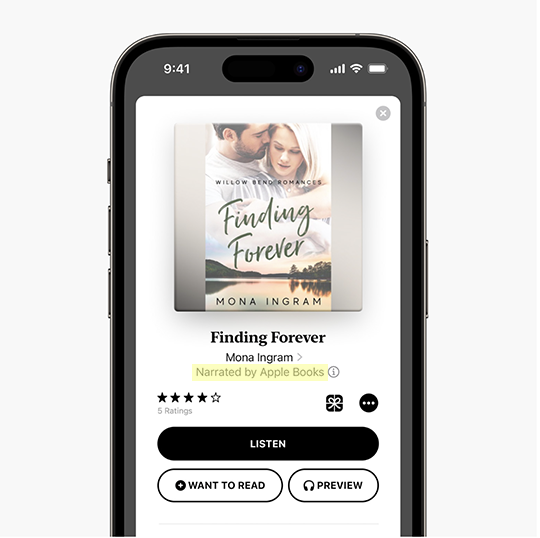 “Publishers involved in the project were required to sign nondisclosure agreements,” The Guardian says, “reflective of Apple’s notorious pursuit of secrecy.”

Not so secret? Apple is targeting certain genres for its digitally narrated audiobooks; most notably, the initial launch includes romance novels and self-help books.

The company has even assigned names for the AI voices. Romance fiction gets “Madison” or “Jackson” while self-help AIs are tagged “Helena” and “Mitchell.”