Enjoy it while it lasts: According to AAA, the national average price for a gallon of regular unleaded gasoline is $3.29 — down dramatically from its peak of $5.02 only seven months ago.

Alan joins us today with the final round of the Paradigm team’s 2023 predictions. Energy prices are set to rise, yes — but he hastens to add that “the right investment can make you a victor, not a victim.”

Why is Alan so confident about rising energy prices? Because among all the major asset classes, oil was the last to hit bottom in 2022 before rebounding.

Gold hit bottom in September. Stocks bottomed in October. Crude bottomed around $70 a barrel only a month ago. 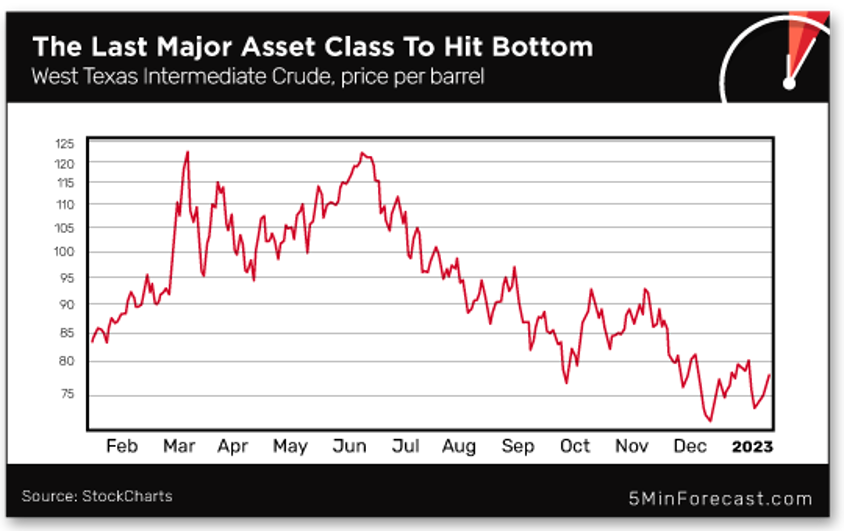 That chart is updated through yesterday. Checking our screens this morning, oil is up again to $79.28.

With the dollar steadily declining against other major currencies since November — and with oil priced globally in dollars — the future trajectory is up and to the right. Based on his chart work, Alan says once oil crests the $80 level again… it’s up, up and away.

Here’s the thing: While oil prices fell from $120 to $70 in only six months… the price of oil stocks held up much better. Contrary to what you might think, Alan says that’s a bullish sign.

The big energy ETF XLE peaked last June in tandem with crude — around $92 per share. After falling below $70 through the summer and early fall, it recovered to an even higher level in November — around $94. This morning, it’s just a shade below $90. Impressive.

As a group, the energy sector is still cheap — with a price-earnings ratio around 12. So “the challenge,” says Alan, “is to find stocks that have not yet surged.”

With that as a prelude, Alan wishes to introduce you to Warren Buffett’s favorite energy stock — Occidental Petroleum (OXY).

“The Oracle of Omaha loaded up to the tune of 20 million-plus shares since July,” Alan says. But so far, the share price remains little moved. At $65.30 this morning, the P/E ratio is a dirt-cheap 5.4. 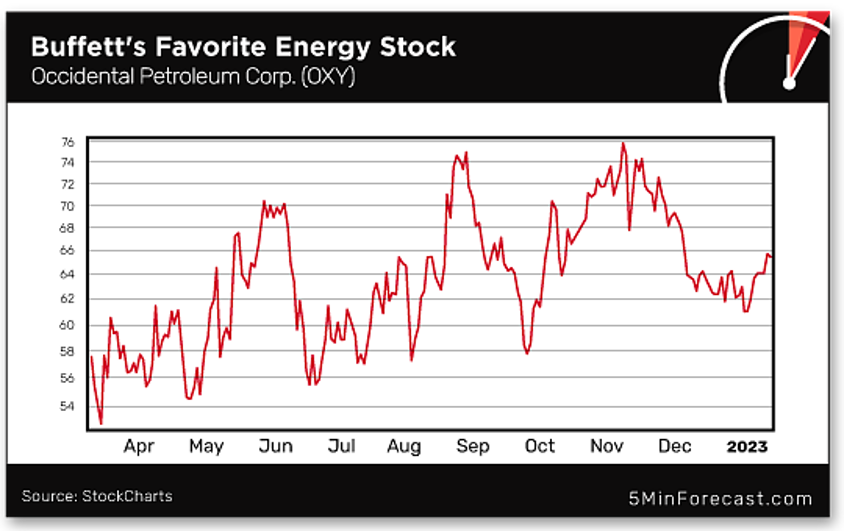 Right now, OXY shares are about 15% off their October top. As you can see, they’ve traded since last spring in a range between $55–75. We’re just above the midpoint of that range right now — “a sign that a rally has begun,” Alan says. “The larger-measure move breakout target stands at $95 — another $45% higher.”

But don’t go out and scoop up shares of OXY today. Alan recommends something else instead.

“The way I position for success is with limited-risk, in-the-money call options” — and what he calls his “stock substitution strategy.”

The limitations of our 5 Mins. don’t allow us to get into the weeds about in-the-money calls today. Suffice it to say these are not the lottery-ticket kind of options that the meme-stock crowd was playing the last couple of years — often with disastrous losses.

With in-the-money options, you get the potential for big upside… while keeping your risk strictly limited. “The limited-risk option acts like the stock,” Alan says, “and has the right to buy shares at a major discount to the current trade.”

So… free for readers of The 5, here’s Alan’s way to play OXY…

If you were fortunate enough to be at our Paradigm Shift Summit in Las Vegas last fall, you already know the power of Alan’s approach — which he laid out in detail. Then, he recommended March call options on the gold-mining giant Newmont Corp. (NEM). Just this week, those options hit his 100% profit target.

The last trading day of the week is the first day of quarterly earnings season… and it’s off to a “meh” start.

Three of the Big Four commercial banks were first to report their numbers this morning: Bank of America beat expectations, and so did JPMorgan Chase. But Citi laid an egg, registering a 21% decline in profit. Ironically, Citi shares are the best performing of the three today — up 2% as we write. That’s the halo effect of Federal Reserve tightening — banks can charge higher interest rates, while still paying a pittance on deposits.

Gold pushed past $1,900 today and silver over $24. If those hold by day’s end, we’re looking at closes above important round-number resistance — a bullish sign indeed.

Crypto, you wonder? Amid the news that FTX co-founder Sam Bankman-Fried has launched a Substack newsletter from confinement at his parents’ home, Bitcoin is now over $19,000 and Ethereum over $1,400. Both are high-water marks since the collapse of FTX in November.

The CEO of the world’s biggest company will be earning less… and working harder for what he does earn.

In an SEC filing yesterday, Apple disclosed that CEO Tim Cook asked for and got what amounts to a 40% pay cut — after only 64% of Apple shareholders voted their approval of Cook’s 2022 compensation.

Not that he’ll be crying poor, to be sure — total compensation will still be in the neighborhood of $49 million.

Cook’s biggest long-term challenge is something we mentioned once or twice last year — the imperative to start moving Apple’s production outside of China.

“For over a decade now,” says our tech-investing authority Ray Blanco, “Apple has relied on manufacturing partner Foxconn for virtually all of its iPhone production needs. One of Foxconn’s manufacturing locations is referred to as ‘iPhone City’ and is located in Zhengzhou, China.”

Less than two months ago, we chronicled how under China’s zero-COVID policy, workers had been locked inside the complex for weeks — separated from their families. They were promised bonuses, but then the bonuses didn’t come through on schedule. The workers revolted and police moved in with batons.

Even before that episode, Apple was getting a black eye for its reliance on Chinese labor.

As Ray explains it, “working conditions and labor practices in the country, specifically the infamous ‘suicide nets’ installed by Foxconn, have long projected a troubling image for Apple and its manufacturing partner.” 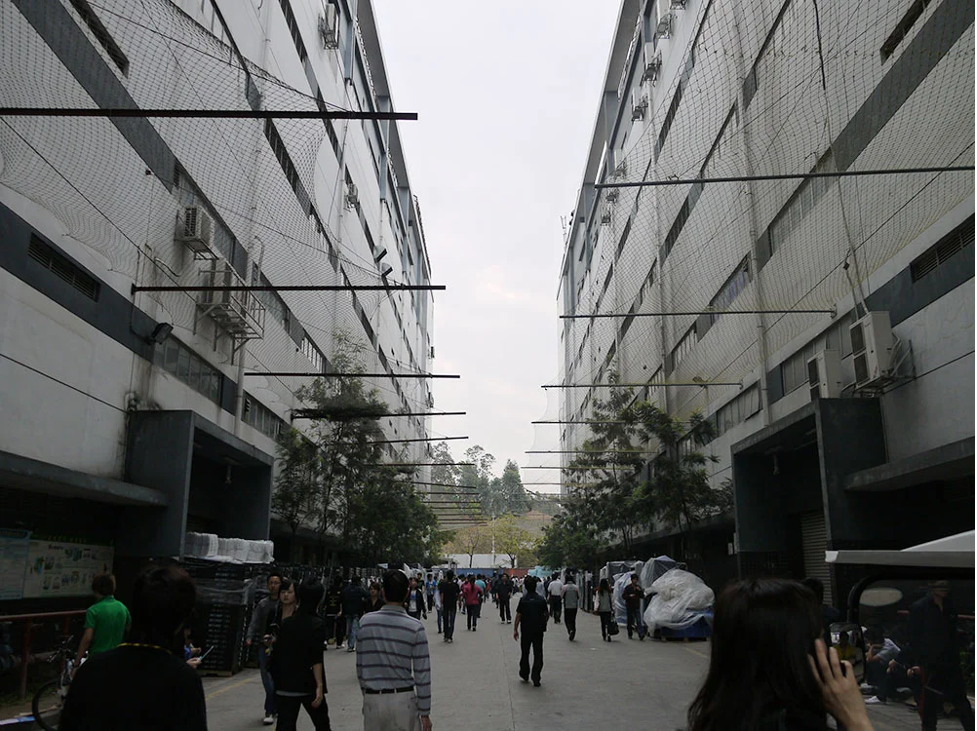 Totally normal: Suicide netting at a Foxconn factory in Shenzhen

And so Apple is looking to expand iPhone production elsewhere.

Easier said than done, though: “There are hundreds of parts in every iPhone,” Ray reminds us, “and sourcing and gathering the required materials is already a massive project, let alone assembling them.”

Many of the raw materials and components are currently sourced and refined in… China. Many of the companies Apple works with to source those components operate mostly in…. China.

“Even still,” says Ray, “in recent statements, Tim Cook has mentioned that the company continues to improve its manufacturing capabilities in countries like India and Vietnam.”

Costly? Yes. Time-consuming? For sure. By some estimates, it would take 10 years for Apple to extract itself from China in a measurable way. But zero-COVID, among other things, proved that China was an unreliable partner.

Cook is bowing to reality. Other CEOs are sure to follow.

“Ms. Homendy is right — they are dangerous,” a reader writes about the head of the National Transportation Safety Board and large electric vehicles with heavy batteries.

And it’s not just the collision risk: “Once they catch fire, you have a hard time putting the fire out.

“Solar on top of your home? The fire department around here [Missouri] has been instructed to let it burn.

“I was in Ecuador when the government went green, outlawed gas stoves and stated that only induction stoves could be sold,” a reader writes on the heels of the Biden administration’s trial balloon about banning gas stoves.

“Within a half year there were electrical problems in Salinas (brownouts and transformer burnouts). The government had to rescind the order.

“I’ll bet dollars to donuts the flakes who came up with this idea for the USA never thought about its effect on the electrical grid that in some places is at capacity.

The 5: Or beyond capacity — recalling California’s request last summer that EV owners refrain from charging their vehicles at certain hours.

Meanwhile on Twitter, the journalist Alex Berenson — about whom we have very mixed feelings, full disclosure — sees an ominous link to New York state’s proposed ban on natgas appliances and heating in new buildings.

“Upon further review the gas-stove freakout makes a lot more sense; it’s the opening shot in trying to scare homeowners into turning against ALL their carbon-burning equipment — furnaces, boilers, etc.” 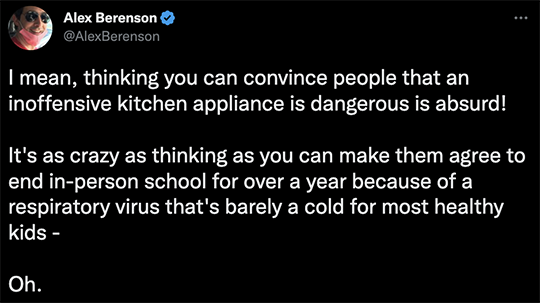 Anyway, we choose to wind down the week with some more good gas-stove memery… 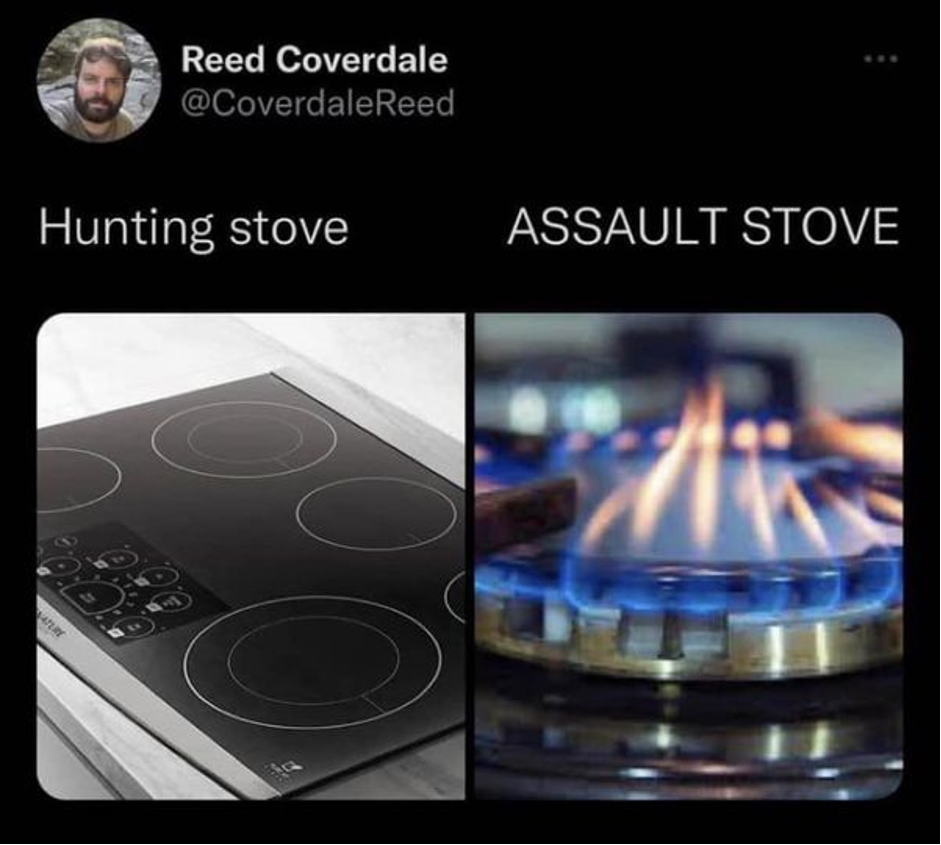 OK, one more mailbag entry: “Thank goodness you had the disclaimer for your statement ‘crappy 1970s-like decade for stocks”. Please emphasize for stocks.

“I grew up in the ’70s, graduated from high school in ’73 and finished college in that decade.

“The best thing about that decade was the fact you could see a rock concert from $5–15 including Led Zeppelin, the Who, the Stones, Eric Clapton, Jeff Beck (RIP), Bowie and so many more. You could buy all of them in vinyl, cassette and 8-track! Gas was mostly under $1 a gallon and we could cruise in those big-block hot rods all night.

“You were ‘square’ if you didn’t hang a Farrah Fawcett poster in your bedroom… ah, Farrah :-)”

The 5: Yes, there were many fine things about the ’70s, although your editor was too young to experience them as an adult. But I was lucky enough to see progressive legends like Yes and Emerson, Lake & Palmer tour in the 1990s! (If I had a guitar idol, it would be Steve Howe. But I’m a keyboard guy, so my idol is Keith Emerson — who left us way too soon in 2016.)

[Disclosure: Your editor steadily built a position in XLE throughout the latter half of 2022, and I intend to keep doing so a while longer. Not that my buys can possibly move such a huge, liquid ETF… but we aim for transparency.]