Here we go again: As of tomorrow, the U.S. Treasury will resort to “extraordinary measures” to stay below the debt ceiling.

In December 2021, Congress raised the arbitrary limit on the size of the national debt — aka the “debt ceiling” — to $31.4 trillion.

By Treasury Secretary Janet Yellen’s reckoning, Uncle Sam will bump up against the debt ceiling tomorrow. From that point forward, she’ll resort to “extraordinary measures” to stay under the ceiling — various accounting tricks such as borrowing from federal employee pension funds.

But those tricks go only so far… and Yellen says without action from Congress, Uncle Sam risks defaulting on the national debt by “early June.”

And so begins another protracted round of grandstanding by politicos of both major parties.

It happens every couple of years… but the buzz around Washington is that the partisan acrimony this time is shaping up to be the worst since 2011.

The market impact of that episode was palpable: Starting on July 22, 2011, the stock market went on a steep skid — falling nearly 17% in 17 days. The government did not default… but along the way, the bond-rating arm of Standard & Poor’s downgraded U.S. government debt from a pristine AAA rating to AA+. In the aftermath, gold became a safe haven — soaring $250 to record highs by Labor Day.

Today’s a good day to once again dispel a debt-ceiling myth you’re likely to encounter as you traipse the interwebz over the next few months.

There was a time your editor bought into the myth. It goes like this: “The government will never default as long as it continues to make the interest payments on Treasury notes, bills and bonds. Even though the government’s interest expense will run $580 billion this year, federal tax revenue will be close to $4.8 trillion. So covering the interest payments will be no problem.”

Oh, but there is a problem: Cash flow isn’t a year-to-year thing, it’s a day-to-day thing.

“For example,” he continued, “the Treasury has an interest payment of about $30 billion due on Aug. 15. On that day, it will take in about $15 billion in tax receipts, so it won’t even have enough to make the interest payment alone.”

So in that summer of 2011, the Treasury faced the very real risk of having to withhold $22 billion in Social Security payments due on Aug. 3 — just to make sure it could cover interest payments due a few days later.

The president and Congress cut it razor-close, with Barack Obama signing the Budget Control Act of 2011 on Aug. 2. Social Security payments went out on schedule the next day.

But if they hadn’t… is there any word to call it other than “default”?

“The Treasury can literally go broke if they run out of cash on a given day,” Paradigm’s Jim Rickards affirmed in this space five years ago.

Jim would know: For 10 years in the 1980s and ’90s he worked for one of the couple dozen Wall Street firms that are “primary dealers” — underwriters at auctions of U.S. Treasury securities.

“This does not require congressional approval and would only be used as a last resort. This has been done before; last time was 1953.

“Of course, the price of gold would skyrocket in that scenario.”

It all depends on the price the Treasury sets; a 30% jump from today’s levels isn’t inconceivable — in which case we’d be looking at $2,500 gold.

It’s an outlier possibility for sure — but one that might look more plausible as 2023 wears on. Stay tuned…

There’s a boatload of economic numbers today… and they all point to “slowdown” if not “recession.”

Begin with wholesale inflation: The producer price index fell 0.5% month-over-month, slowing the year-over-year increase from 7.4% in November to 6.2% in December. Both numbers came in way below expectations. Falling energy prices are the big driver.

All good, right? The Federal Reserve wants a falling inflation rate, after all.

Ah, but the Fed would also like to pull off the proverbial “soft landing” — slowing down the economy just enough to tame inflation, but not so much as to trigger a recession.

Which brings us to the other numbers today: Retail sales fell 1.1% in December, more than expected.

If you factor out vehicle sales (volatile month-to-month) and gasoline sales (falling prices skew the sales total lower), you end up with a 0.7% drop — and no one among dozens of economists polled by Econoday saw that coming. Sales of nearly everything were down except for groceries, sporting goods and building materials — and those increases were meager.

And the producing side of the economy looks no better than the consuming side: Industrial production fell 0.7% in December. It would have fallen further were it not for the fact that cold weather goosed utility output.

All told, 78.8% of America’s industrial capacity was in use last month. This important measure — capacity utilization, it’s called — clearly rolled over during November and December. 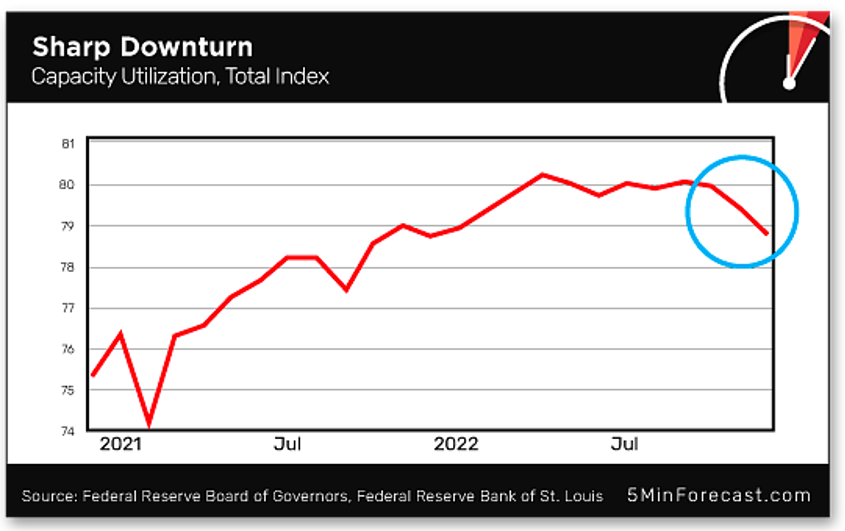 Wall Street could interpret all these numbers one of two ways…

Today at least, Wall Street is opting to sell.

Adding to the gloom is word that Microsoft plans to cashier 10,000 employees. Usually Mr. Market welcomes job cuts as a sign of fiscal discipline — but not today. MSFT is off 1.7% as we write.

Pfizer, meanwhile, is down 5.4% over the last two days after the FDA and CDC warned of a possible link between PFE’s “bivalent” COVID-19 boosters and ischemic stroke in over-65 patients during the 21 days after vaccination.

Cryptos are selling off, though not dramatically, after the feds announced they seized the Bitzlato exchange — accusing it of money laundering — and arrested its Russian founder in Miami. Bitcoin is a hair below $21,000 and Ethereum at $1,550.

The big news from the World Economic Forum in Davos — not that the mainstream is noticing — is Saudi Arabia continuing to tiptoe away from the petrodollar.

As a reminder, the petrodollar arrangement is what emerged after the OPEC nations boycotted the United States and other Western nations in 1973. Under this system brokered by Secretary of State Henry Kissinger, Saudi Arabia prices oil in U.S. dollars and uses its clout to get other OPEC nations to do the same. In return, the U.S. government protects Saudi Arabia and its allies against foreign invaders and domestic rebellions.

For a decade now, we’ve been seeing signs that this arrangement is slowly coming apart. Last year, The Wall Street Journal reported that Saudi Arabia was considering pricing its oil sales to China in yuan.

Now at Davos, Saudi Arabian finance minister Mohammed Al-Jadaan says his government is open to trading with currencies other than the dollar. “There are no issues with discussing how we settle our trade arrangements, whether it is in the U.S. dollar, whether it is the euro, whether it is the Saudi riyal,” he tells Bloomberg News.

For the moment, Al-Jadaan is trying to split the middle — calling China “very important for Saudi” even as the United States “is a very important and strategic partner.”

This story has a long arc: The petrodollar’s death will be one of a thousand cuts, and at this stage we’re only maybe a few hundred in. But once we get to 1,000… Americans will find everything dramatically more expensive, forever.

As long as we’ve brought up Davos, allow us a moment to express our fury at this spectacle… 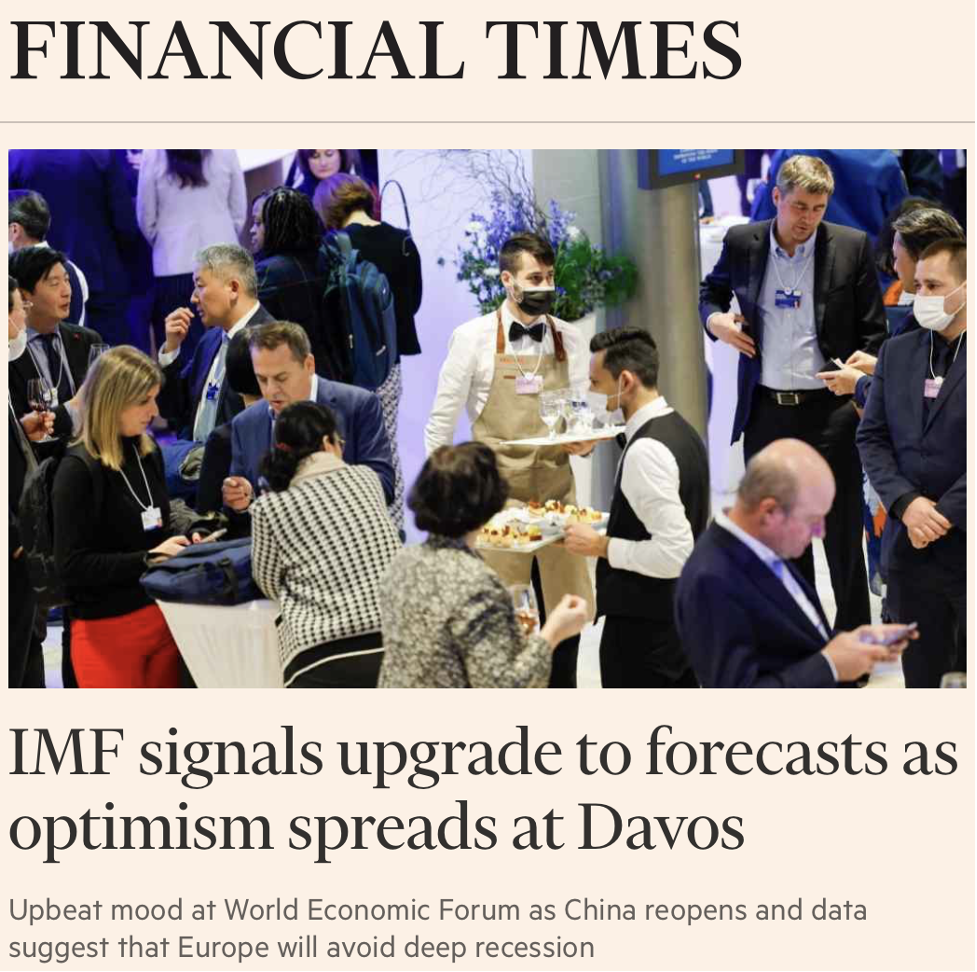 In September 2021 we were aghast at the sight of unmasked guests attended to by masked servants at the Met Gala in New York (the event where Rep. Alexandria Ocasio-Cortez showed up in her “tax the rich” dress). 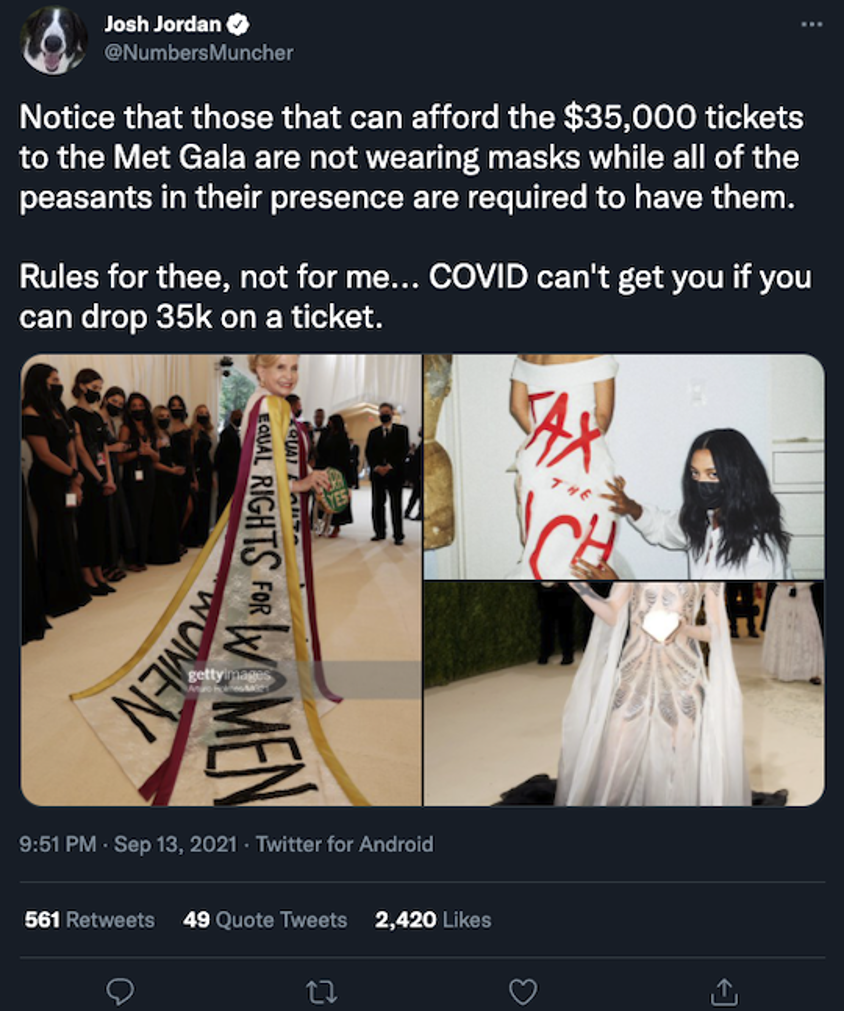 The fact this is still going on, 16 months later? That means it will go on forever — as brazen and cruel a manifestation of the “new normal” as the power elite can foist onto the plebes.

To the mailbag, and reactions to our Davos edition yesterday…

“You end your chain of events of the 2011 Fukushima polycrisis at the action in the Tokyo stock market. I would submit that Germany’s shuttering of her nuclear plants was another knock-on event hatched by Fukushima and is evolving into the ongoing European energy polycrisis.

“Like rolling thunder, the effects of a really big FUBAR can go on and on, and be felt by many faraway from the original event.”

The 5: You are absolutely correct: Chancellor Angela Merkel moved to mothball Germany’s nuclear-power industry shortly after Fukushima — even though, last we heard, Germany is not subject to severe earthquakes or tidal waves.

“True believers,” reads the subject line of our next entry.

The reader invokes the Bill Bonner quotation we used yesterday: “The problem is that when you look more carefully at the land they are promising, it looks more and more like a prison. It is a prison constructed by true believers, who think they know what is best for us.”

The reader says Bill’s line reminds him of C.S. Lewis’ remark about busybodies…

“Of all tyrannies, a tyranny sincerely exercised for the good of its victims may be the most oppressive. It would be better to live under robber barons than under omnipotent moral busybodies. The robber baron’s cruelty may sometimes sleep, his cupidity may at some point be satiated; but those who torment us for our own good will torment us without end for they do so with the approval of their own conscience.”

The 5: Up to a point, yes. But we’ll counter Lewis with Orwell — and the torture/reeducation scene toward the end of 1984.

O’Brien asks Winston Smith: “Why should we want power?”

Winston gives the answer he thinks O’Brien wants to hear: “You are ruling over us for our own good.”

O’Brien cranks up the dial and proceeds to explain the real deal. “The Party seeks power entirely for its own sake. We are not interested in the good of others; we are interested solely in power. Not wealth or luxury or long life or happiness: only power, pure power.”

Yep. Too often the “good intentions” of the world improvers, empire builders and do-gooders are just window dressing for the fact they get off on making other people bend to their will.

“Can you retail some T-shirts with those great Davos memes?” writes our final correspondent. “Or suggest where to buy?”

The 5: Well, we showed the “eat ze bugs” one already on a T-shirt — it’s $25.75 at Etsy. Wouldn’t surprise us if the other ones are available in T-shirt form too. Happy hunting! (We’ve come to believe in better living through memes…)