If China were to make a move on Taiwan… this week might be as good a time as any.

Yes, we know there’s a world of problems out there already — high energy prices, central banks in uncharted waters, nuclear superpowers edging closer to direct armed conflict — but it’s Taiwan that has our attention this morning.

No, we don’t anticipate a full-on invasion — but a naval/trade blockade? It’s not outside the realm of possibility.

From the Voice of America: “Chinese President Xi Jinping issued a veiled warning to the United States in his new year message to the country, stressing that China will be engaged in ‘serious struggles’ against separatism and interference in its relations with Taiwan, state media, CCTV and the Xinhua News Agency reported Friday.”

For one thing, “These dates potentially coincide with a Russian winter offensive in Ukraine,” write the analysts from the private intelligence service Forward Observer.

“Additionally, starting a blockade at the end of January would give China roughly 60 days until the next ideal window for an amphibious landing on Taiwan in April. A Chinese blockade during this period would force Taiwan to use up most of its reserve resources. Taiwan probably has about a month’s supply of oil and natural gas.”

To be clear, Beijing probably doesn’t want to make a move on Taiwan. Certainly not now.

“Over the last decade Taiwan invested $188.5 billion in China, more than China’s investment in the United States,” writes retired U.S. diplomat Peter van Buren at the Responsible Statecraft website. Taiwan was China’s No. 5 trading partner in 2022 — not far behind Japan and South Korea.

So you don’t blow up a trade relationship like that willy-nilly — unless you feel like you’ve got no choice.

Since 1979, Washington’s position toward Taiwan has been one of “strategic ambiguity.” Officially, there’s only one government responsible for both the mainland and Taiwan, and that government’s capital is in Beijing. Unofficially, however, Washington sells Taiwan scads of weaponry — presumably to help fend off an attack by Beijing.

For its part, Taiwan has kept up the “one China” pretense, never declaring independence from the mainland.

The “one China” policy has kept the peace in the Taiwan Strait for over 40 years… but Joe Biden is doing his damnedest to undermine it.

On a visit to Japan last May, a reporter asked whether he’s willing to “get involved militarily to defend Taiwan.” His reply: “That’s the commitment we made.”

Four times over the last 18 months — more times than you can chalk up to incipient dementia — Biden has uttered words more or less repudiating the one-China policy. No wonder Xi Jinping issued that “veiled warning” three days ago.

“The Taiwan issue is completely nonnegotiable from China’s perspective,” Paradigm’s Jim Rickards said in this space six years ago.

“The Chinese might as well ask Washington if California can seek independence. California is part of the U.S. and Taiwan is part of China as far as the Chinese are concerned. Case closed.”

Here’s a different analogy to ponder — the war in Ukraine. Moscow probably didn’t want to invade 11 months ago. But Vladimir Putin felt that the longer he waited, the more arms that Washington and its European allies would pour into Ukraine.

With that in mind, Jim says several events are pointing toward action sooner rather than later.

Mainland China and Taiwan: Notice how the CIA World Factbook still heeds the one-China policy by using a single color for both.

Maybe nothing will come of this right away. As we chronicled in 2021, U.S. war planners figure Beijing would make a move anytime between now and 2027.

Meanwhile, no one in Washington is leveling with the American people about the stakes. Also in 2021, we cited the syndicated columnist Pat Buchanan: “If China uses force to compel Taiwan to repudiate any right to independence, are we prepared to fight a war with a nuclear-armed China over the island’s political status and orientation?”

What supplies would you want to have on hand at home just in case? And who would be the winners and losers among publicly traded companies?

Big, deep questions — ones we’ll be asking here at Paradigm Press in the months ahead. We’re proceeding on the assumption it’s still not too late…

[Ed. note: Since last fall, readers of Jim Rickards’ Insider Intel have bagged handsome gains playing strategically timed call options on a major defense contractor. We’re talking gains of 45%… 50%… 99%… and 103% — some of those gains materializing in only one week.

Through midnight tonight only, we’re offering a $557 account credit good toward an Insider Intel subscription — as Jim details when you follow this link.]

U.S. stocks are starting the new week on the rally tracks — thanks to the latest “authorized leak” from the Federal Reserve to Wall Street Journal reporter Nick Timiraos.

The story, posted on the web yesterday morning, was no surprise really — a quarter-percentage-point jump in the fed funds rate coming next week, and increasing talk of whether to pause rate increases later this spring.

Bonds are selling off, pushing yields up — the yield on a 10-year Treasury back above 3.5%.

Before the mailbag, a grab bag of random thoughts on a Monday morning.

The World Economic Forum’s annual shindig in Davos, Switzerland, is now over — but not before the assembled grandees issued a hair-raising report, warning “a far-reaching, catastrophic cyber event is likely in the next two years.”

Knowing everything we know about the Davos crowd and the “Great Reset” now, you can be forgiven for wondering if that’s a worry… or a declaration of intent.

Meanwhile, we direct your attention to colleague Sean Ring and this morning’s Rude Awakening — which spotlights Beijing’s latest gambit to circumvent the U.S. dollar. More to the point, it spotlights how the business media are finally waking up to something we’ve been talking about for years. It’s an important new chapter in the story.

Finally, chew on this… 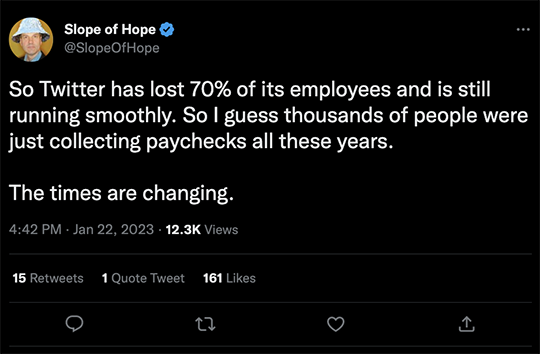 On the subject of the “fair tax” Emily tackled in our Saturday edition, a reader writes…

“Perhaps you did not notice that the subject you talk about is the standard tax mechanism in the European Union — aka the value-added tax. Sorry, get educated, Emily. At least now I know who to skip.”

The 5: Missing the point much?

For what it’s worth, we’re keenly aware of the VAT’s presence elsewhere in the world. We’re equally aware that many people in the U.S. power elite would love nothing more than to introduce the same concept here — in addition to the income tax, of course.

The point Saturday is the irony of “conservatives” pushing a concept that would result in a vastly increased tax burden unless the 16th Amendment is repealed, and good luck with that.

“Regardless of tax rates, deductions, etc., the percentage of tax the U.S. gov’t collects stays remarkably consistent,” another writes, citing figures from the Organization for Economic Co-operation and Development.

“If so, the question becomes what is the best way to collect taxes?  A consumption tax is far more efficient, far less intrusive and, dare I say, fairer.  If it is true that whatever you tax you get less of, then I would rather reduce consumption than income.”

The 5: You present those figures as if they’re an inalterable fact of life, like rocks are hard and water is wet.

Also, the figures go back only to the year 2000. We have a somewhat longer time horizon:

The American Colonists revolted against a tax burden that was a mere fraction of what we endure today. After independence, there was a long time when the only revenue collected by Washington, D.C., was a modest import tax and proceeds from the sale of federal lands. Just sayin’…

Finally, reader reactions to Friday’s “No Family, No Faith, No Freedom” edition…

“Dave, you did an excellent, fair job of presenting Desmet’s mass formation thesis as well as bringing in C.J. Hopkins’ counter-theory.  People definitely feel more isolated these days.    Loneliness was rampant even before 2020.  The lockdowns certainly didn’t, and still don’t, help.

“Yes, lockdowns are still a factor for some people.  I live in a small (population approximately 40) senior living establishment where we recently had a two-week lockdown because a few residents were diagnosed as having the you-know-what.  Many (all?) of the residents found themselves getting increasingly depressed because of the isolation imposed by management, who have to do such things because of state regulations and guidelines.

“And now the Davos crowd are predicting (plotting?) more such shamdemics, not to mention 15-minute cities and other dystopian scenarios.

“As always, keep up the excellent work both you and Emily do at The 5. It’s one of the best sources for news.”

“But you forgot one of the other results in the absence of strong families, strong churches and strong communities … the formation and popularity of gangs.

“Kind of like governing bodies … complete with sanctioned violence, lies, coercion, extortion, disrespect for property, power struggles, control, you know… all the things our government is becoming known for.”

The 5: On that note… apparently you can get a T-shirt or a sweatshirt with this expression in a variety of different fonts from a buncha different suppliers… 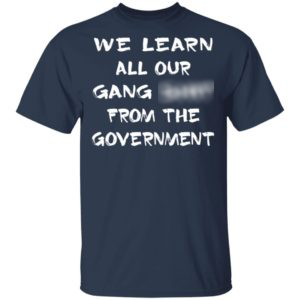 P.S. Today was the day: Dan Amoss, senior analyst for The Situation Report With Jim Rickards, sent out a sell alert for their recommended Goldman Sachs put options.

Between a terrible quarterly earnings report and news of a Federal Reserve investigation, those GS puts soared 47% in only 11 days. Nice!

We’re reopening access to The Situation Report later this week, so watch this space…