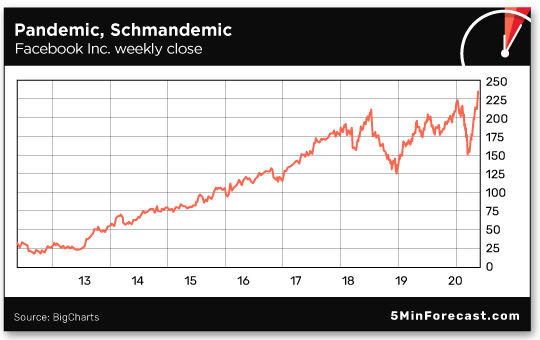 From time to time as the stock market has recovered from its panic lows two months ago, we’ve mentioned how tech-oriented stocks have outperformed… and the very biggest tech stocks outperformed even more.

For all our lamentations last Friday about the social media giants and the wet blanket they’re throwing on free expression… there’s little doubt Facebook is emerging from the corona-crisis even stronger than before.

And that’s the real story behind the launch of Facebook Shops last week.

We mentioned how small businesses can now use FB’s platform and technology to sell their wares. CEO Mark Zuckerberg figures it’s an easy way for a brick-and-mortar retailer shuttered by lockdowns to get an online presence. “We’re seeing small businesses that had online presences now make them their primary way of doing business.”

It’s not just another way for FB to diversify. Explains our hedge fund and venture capital veteran James Altucher: “The move comes as the social network giant pivots from relying on advertising revenue to e-commerce in response to pandemic-driven economic changes.”

We take James’ pronouncements about FB with utmost seriousness around here.

In July 2007, James was nearly laughed off CNBC when he said one day Facebook would be a publicly traded $100 billion company.

CNBC invited him back a few weeks later, and he issued another prediction: “I think long term, we’re going to see over the next five years up to $10 billion in earnings… There’s never been a medium where you could target a billion people with one ad. Facebook is it.”

When he joined our team three years ago, he said FB’s user base and its fast trove of data “is quite possibly the most valuable asset in the world today. More valuable than Saudi Arabia’s oil reserves, Google’s algorithms or the recipe for classic Coke.”

And now? “With the growth of e-commerce as one of the bright spots in the COVID-19 epidemic, the timing is ripe for the company to begin offering e-commerce through its platform,” James tells us.

“Facebook (along with other internet businesses heavily reliant on advertising) has long sought to make advertising more efficient by providing tools that allow businesses to pay based on sales performance,” James explains. No time like the present to pounce.

In addition, “Facebook would also benefit by receiving better data around buyer behavior, allowing it to optimize its already sophisticated marketing tools to provide businesses with better targeted advertising campaigns.”

Libra is FB’s digital currency effort. It’s gotten a ton of pushback from governments and central banks around the world. But Facebook can easily find workarounds… and Facebook Shops is emerging as key to that strategy.

“In February,” James explains, “Facebook inked a deal with Shopify to join the Libra Association, suggesting that digital currency could be available for payments at more than 500,000 stores on the platform.

“Now the new Shops feature would integrate with existing platforms like Shopify, WooCommerce and BigCommerce.

“While it was previously unclear how Facebook would incentivize users to adopt Libra, Facebook’s Shops initiative represents a major step forward in this domain. Shops will eliminate the friction of entering payments during online checkout by allowing users to store payment information within the platform.”

Like it or not, the strong are getting stronger in whatever the post-pandemic world is going to look like.

[Ed. note: Whatever your feelings about Facebook, you don’t want to pass up a lucrative trading strategy James has developed.

It’s called AlphaBrain… and it gives you an opportunity to seize on pandemic-driven market volatility. There’s nothing else like it; check out James’s 90-second demo at this link.]

With one week remaining in the month, the adage about “sell in May and go away” isn’t working out very well in 2020.

In any event, the S&P 500 is back above the 3,000 level for the first time since early March. Likewise for the Dow crossing the 25,000 mark.
Perhaps there’s also a bit of euphoria about the New York Stock Exchange trading floor being open for action again after two months (at lower capacity for better social distancing, of course).

The reasons are all around us. “The government has tried to counteract the coronavirus’s effects by paying out trillions of dollars,” Zach says.

Some of the recipients are companies you might say are less than deserving. “Thanks to the government handouts, it doesn’t matter if a company has lousy management or a ridiculous business plan. Instead, they’ll just take longer to fail… except they’ll also take taxpayers’ money with them.

“A similar thing is happening to the unemployed. The federal government is paying some people much more than they were making at their old jobs — giving them no incentive to go back to work.

“The thing is none of this is going to change anytime soon. The effects of the coronavirus will be with us for years… meaning the government will need to continue handing out cash.”

No, Zach doesn’t anticipate a Weimar Germany scenario… but if you remember the inflationary ’70s, you know why Zach is keen on gold right now even though his investment philosophy is all about the income and gold doesn’t have a yield.

The economic number that catches our eye today is another one of those “worst on record” things we’re getting used to.

The Chicago Fed National Activity Index crunches 85 economic indicators to come up with a composite figure that’s proven uncannily accurate in calling recessions going back to the index’s debut in 1967.

If the three-month moving average dips below minus 0.7, that’s a surefire indicator a recession is setting in. As you can see, the decline encompassing March and April is — well, we’re getting used to this term — unprecedented. 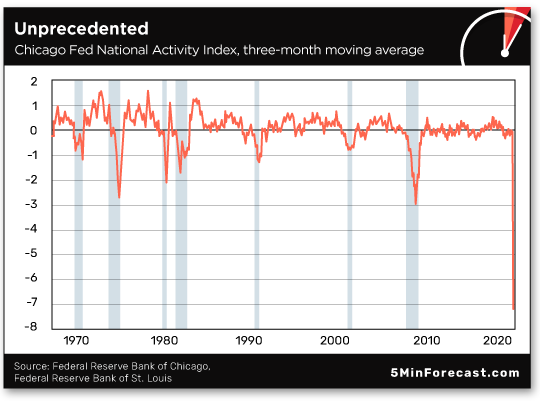 The other big economic number today is an upside surprise — new home sales rising 0.6% in April, according to the Census Bureau.

It didn’t hurt that builders were dropping prices — from a median of $320,000 in March to $309,900 in April. Still, the number’s a head-scratcher — even allowing for how it’s notoriously volatile and subject to revisions after the fact.

These are the sorts of numbers that are collected not, say, once a month — but almost constantly. Earlier in May our resident futurist George Gilder pointed us to requests for iPhone driving directions that had been moving up steadily since Easter Sunday, April 12.

Now The Wall Street Journal tells us the number of air travelers passing through TSA checkpoints tripled between April 14 and last Friday. Granted, it’s still down 88% from a year ago…

In addition, online restaurant bookings through OpenTable are starting to turn up, at least in the states where the lockdowns were lifted earliest.

As the global auto industry slowly ramps up, Audi’s “nose team” is back in action… 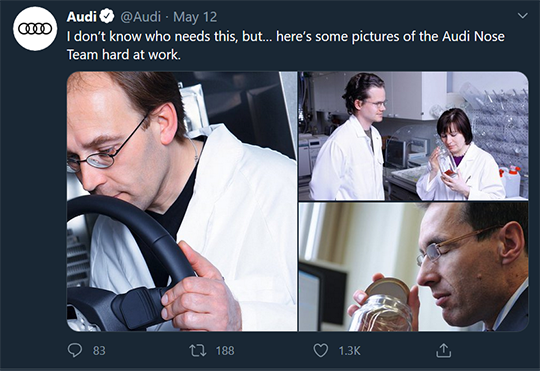 “Since 1985, Audi's odor team, better known as the ‘nose team,’ has been working diligently to make the interior smell as pleasant as possible,” the CarBuzz website informs us. “Since the early 2000s, Audi chemist Heiko Lüssmann-Geiger has led the five-person nose team at Audi's Bavarian Quality Center.”

Lüssmann-Geiger takes his job seriously. He says all the things that go into the comfort level of a vehicle can be ranked in… a pyramid.

"At the tip of this hierarchy pyramid is the well-being of the customer, right at the base is the smell. If the customer is now irritated by this odor from below, he will no longer correctly perceive all the other positive comfort properties of the vehicle. He is too irritated by the stress brought about by the odor."

Makes you wonder how they “recalibrate” after someone brings in coffee and doughnuts, right?

To the mailbag, where it appears our best-of episode from Aug. 8, 2018 — rebroadcast last Friday — is just as relevant now as it was then.

“Nothing new. It’s crony capitalism. Companies, and whole industries, have destroyed free markets in order to ‘partner’ with government and thereby insulate themselves from competition, make their own rules. Banks were first, the biggest and the baddest. Whole industries followed suit, from Big Pharma to the war industry.

“The formal bureau for control of social media has not happened — yet. But in the meanwhile, Facebook and Twitter and all the rest are cozying up to the government, doing PR and censorship for them, proving that they are the folks who need to be in charge when the government does intervene. The folks at the top of these companies believe in authoritarian government.

“You find yourself in a tricky situation. Speaking out on topics like you do not only elicits negative responses from those who support the narratives, but also endangers your marketing efforts and ultimately your business.

“Seems like there is less and less hope for free speech and tolerance of different opinions in America. Less hope for sure, but is it hopeless? That is the question before us.”

“I have experienced the arbitrary and capricious standards Facebook, Google and YouTube use with advertising,” writes another reader, who’s running an internet marketing startup. ”That is part of the reason I have been learning how to market through email.

“That said, I have often wished some young Turks would start platforms that are with Facebook, Google and YouTube that would allow free speech. If you know of such platforms, please tell me. Otherwise, do you know of people who have the technical, marketing and business knowledge and ability to start such enterprises? Unlike Facebook, Google and YouTube, these platforms, free-speech platforms, would probably be limited to the free world — or what's left of it.

“It would be nice to have competitive, aggressive and highly profitable internet platforms that would force Facebook, Google, YouTube and the rest of the world to come up to our standards of free speech.”

The 5: There’s no shortage of “alt” social media sites out there. How big a reach they have and how effectively you can get your message out with them is another matter entirely…

P.S. Have you watched James Altucher’s 90-second demo of his revolutionary trading system?

If you haven’t, you’ll want to do so right away. The demo goes offline as soon as the market opens tomorrow at 9:30 a.m. EDT. This could be your last chance to watch.