So this whole social-distancing thing is over now? 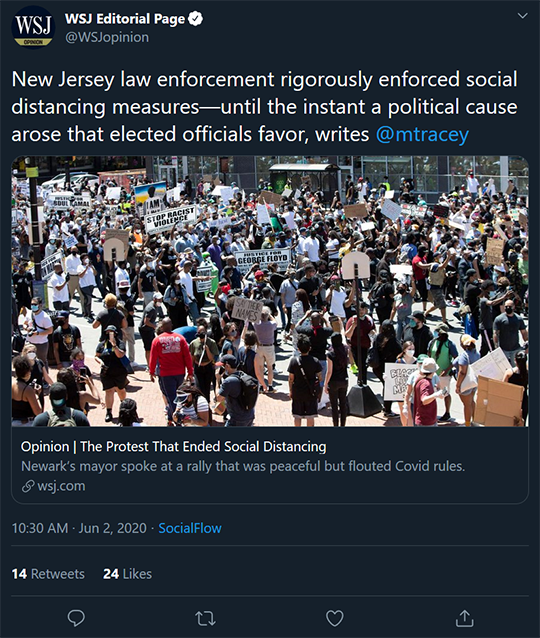 In theory, New Jerseyites are still under orders not to gather in groups of more than 25 people… and they must stay at least six feet away from each other.

In practice, the mayor of Newark, Ras Baraka, joined a large protest march last weekend, and then addressed the crowd.

Our favorite political reporter Michael Tracey was on-scene; he produced an opinion piece published in the print edition of today’s Wall Street Journal.

His question to the mayor: What gives?

“This is a violation, but we’re doing it anyway,” Baraka conceded.

“Holding police accountable is a very important cause,” writes Robby Soave at Reason. “But the logic of the lockdowns was that they were so necessary to stem the spread of COVID-19 that they should override other pressing concerns.

“Small-business owners were forced to shutter, and many will close permanently, because policymakers ordained that slowing the pandemic was the top priority… California Gov. Gavin Newsom, who has fought to prevent churches from reopening to the public, characteristically said the protesters were ‘rightfully outraged.’ He did not scold them to go back inside before they get their grandparents killed.”

Lesson: Social distancing can be jettisoned the moment a cause emerges that the politicos feel they must get behind, lest they lose the consent of the governed.

➢ We have three uncomfortable questions to pose today. First one: What are we as citizens to do when the politicos so blatantly ignore/violate their own edicts?

Is it a coincidence the trouble broke out in many cities days before the rent was due yesterday? Or that many people currently covered by the Paycheck Protection Program know they won’t be covered once the money runs out at the end of this month?

We think back to 2014: “The looting and chaos in Ferguson, Missouri, is not justifiable… but it’s largely caused and inspired by the looting on Wall Street,” wrote the prolific blogger who went by the pen name “George Washington.” (He vanished from the web last fall with nary a trace.)

Added colleague Peter Coyne, who these days oversees our Paradigm Press unit: “Are the Ferguson riots even about race or something deeper and more troubling? Say, an outlash at severe economic decay?”

Pete uncovered research from the Brookings Institution that found poverty rates in every Ferguson neighborhood were under 16% in 2004. By 2014, they were over 20% in every neighborhood but one. Brookings fellow Elizabeth Kneebone told Time that 20% is “the point at which typical social ills associated with poverty like poor health outcomes, high crime rates and failing schools start to appear.”

And when those poverty rates are instantly inflicted on previously lower-middle-class neighborhoods? With no warning?

A pandemic-driven lockdown was one of the few scenarios for economic collapse that our Jim Rickards did not entertain in his book The Death of Money — published the same year as the Ferguson riots, 2014.

But he did anticipate one potential result of collapse — social disorder. “Social disorder is impossible to predict,” he wrote, “because it is an emergent property of a complex system. Social disorder arises spontaneously from the most complex system of all — society — a system larger and more complex than the financial and digital components within it.”

In other words, no amount of statistical modeling by academics and bureaucrats could have predicted that everything would start going to hell in dozens of U.S. cities a few days ago.

“If social disintegration is not predictable, the official response is,” Jim continued. “It will take the form of neofascism, the substitution of state power for liberty.

“This process is already well advanced in fairly calm times and will accelerate when violence erupts.”

Ferguson was a preview. We shared the following meme that was briefly a sensation at the time… 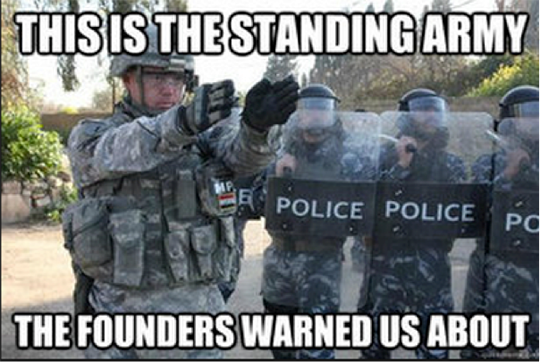 Here in 2020 there’s no better example than the “Light ‘em up” incident Saturday night in Minneapolis.

After curfew fell, a column of armored vehicles and either National Guardsmen or Minneapolis cops — we still don’t know which — began marching down a leafy residential street. Some folks observed from their front porch. That was compliant with the curfew orders, which applied only to “all public places.”

If you haven’t watched the video of what ensued, you should… 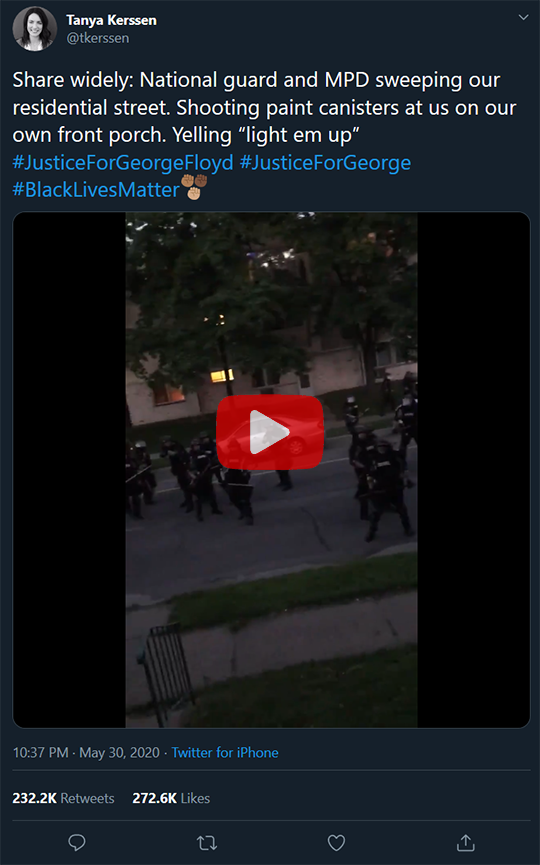 You don’t have to look hard for similar acts. A New York cop ripped off the face mask of a protester, arms raised in surrender, and pepper-sprayed him point-blank. Elsewhere in New York, a police SUV drove into a crowd of protesters, an act that would result in hard time for you or me. A cop in Salt Lake City knocked an elderly man with a cane to the ground; he was standing near a bus stop.

By the way… if you’re a small-business owner who counts on the local constabulary for protection from vandals and whatnot when events turn sporty, you really need to rethink that plan.

Ever since the “Battle of Seattle” during the World Trade Organization meetings in 1999, law enforcement seems to have followed a template with large-scale protests, whether those protests are spontaneous or planned weeks in advance.

The template is this: Peaceful protesters get tear gas, rubber bullets and the jackboot. Meanwhile, the anarchist types and other troublemakers are allowed to run riot, smashing windows and looting.

When we first observed this pattern in late 2018, we couldn’t help wondering if we were oversimplifying or even getting a bit tinfoil-y. But after this past week, the pattern is unmistakable.

No less an authority than the Supreme Court has affirmed that you’re on your own: In 2005, the justices ruled that “police did not have a constitutional duty to protect a person from harm,” reported The New York Times — “even a woman who had obtained a court-issued protective order against a violent husband making an arrest mandatory for a violation.”

The federal courts reaffirmed that stance after the cowardice displayed by the cops during the 2018 school shooting in Parkland, Florida.

Back to the neofascist response and the standing army the Founders warned us about.

Note some of the language we’re hearing, from the highest levels of the U.S. government to everyday street cops.

Defense Secretary Mark Esper said the following yesterday on a phone call with governors: “I think the sooner that you mass and dominate the battlespace, the quicker this dissipates and we can get back to the right normal.”

Early yesterday morning, a police officer in Kansas City, Missouri, delivered the following briefing to reporters about late-night protests: “We feel like this is wrapped up. We don’t have any direct intelligence that we’re going to have something tomorrow at this point.”

“It may be something of a cliché that distant wars have a way of coming home, but that doesn’t make it any less true,” Army Maj. Danny Sjursen wrote in 2017.

Before retiring last year, Sjursen did combat tours in both Iraq and Afghanistan and later taught history at West Point.

It’s become commonplace during the endless wars in Iraq and Afghanistan for U.S. troops to refer to the locals as “hajis.” The term originally meant a Muslim who’s made a pilgrimage to Mecca. It became a catch-all for anyone in the civilian population in those countries; in time it became a term of derision as troops saw the civilian population as separate from them, and as potential threats.

“Policing today is being Baghdadified in the United States. Over the last 40 years, as Washington struggled to maintain its global military influence, the nation’s domestic police have progressively shifted to military-style patrol, search and surveillance tactics, while measuring success through statistical models familiar to any Pentagon staff officer.”

To a police officer whose sole objective is to “get home safe” at the end of his shift, you are not a fellow citizen with rights to be defended. You are a potential enemy to be subdued at the first sign — real or imagined — of resistance to his authority.

And that’s how folks gathered on their porch got “lit up” Saturday night. We’re all hajis now.

Could it get worse if the feds dispatch actual troops to the streets? Hell yes.

“Mark my words,” Sjursen writes today, “sending in 18–21-year-old boys, armed to the teeth and trained for invasion and counterinsurgency, won’t end well.

“I know these soldiers – and in many cases loved them – but the ones I remember (myself included) could hardly be trusted in a bar after a rough deployment, let alone policing an American city.”

But for another Iraq and Afghanistan veteran, now in the U.S. Senate, it’s all peachy-keen…

That means take no prisoners. As in killing the (accused) offenders.

“A no quarter order is a war crime,” says David French of the online conservative magazine The Dispatch, “prohibited even in actual insurrection since Abraham Lincoln signed the Lieber Code in 1863. Such an order is banned by international law and would, if carried out, be murder under American law.”

The likelihood that Sen. Cotton was speaking figuratively? Given his military background? And his Harvard law degree? Not likely at all.

Usually toward the end of these daily missives, we try to find something quirky to serve as an amusement, a diversion, a way to chuckle at the passing scene.

The best we can do today is to spotlight how the people at the top of the power elite in this country think.

On the Sunday talk shows two days ago, after the appalling violence the night before, CNN interviewed Obama’s national security adviser Susan Rice.

“This is right out of the Russian playbook,” she said.

Right. Because race relations, the economy and everything else about America were just dandy before “the Russians” started “sowing discord” during the 2016 election cycle.

Oh, and don’t forget “the Chinese” are supposed to be getting in on the act this year.

You can’t make this stuff up. But the people in charge do. Day after day…

P.S. Thanks for indulging us a single-topic episode of The 5 today. The markets, you wonder? Not much to say. The major U.S. stock indexes are up again. The S&P 500 is now up 37% from the year-to-date low notched on March 23.