The wonks at the Bureau of Labor Statistics just handed you your best “buy the dip” gold opportunity since mid-April.

The May job numbers delivered a huge surprise to the upside this morning — about which more shortly.

But it’s the downside reaction in gold that’s got our attention at the moment. The good economic news (uh, relatively speaking, of course) sent the Midas metal decisively below $1,700. 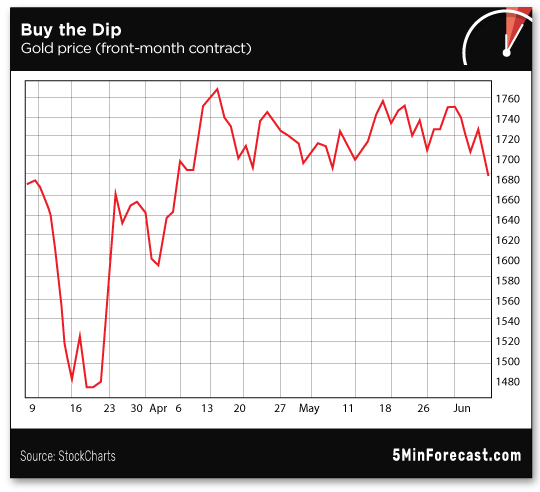 “When it comes to capital and commodity markets, nothing moves in a straight line, especially gold,” says our Jim Rickards.

“Then the market lit a Roman candle,” says Jim. “Gold soared to $1,735 per ounce by May 20, 2020, the highest level since 2012 and a gain of 27% in just 11 months. Gold has been consolidating around that level since early April (despite a quick drawdown and bounce back during the worst of the pandemic stock sell-off in late March).”

But looking beyond today’s dip, Jim says gold is set to exceed its record high of $1,900 set nearly nine years ago.

“What could drive gold out of this consolidation pattern and push it firmly over $2,000 per ounce and headed higher? There are three main drivers:

“The first is a loss of confidence in the U.S. dollar in response to massive money printing to bail out investors in the pandemic. If central banks have to use gold as a reference point to restore confidence, the price will have to be $10,000 per ounce or higher. Any lower price would force central banks to reduce their money supplies to maintain parity, which would be highly deflationary.

“The third driver is panic buying in response to a new disaster. This could take the form of a ‘second wave’ of infections from the Wuhan virus, a failure of a gold ETF or the Comex exchange to honor physical delivery requirements or a victory by Joe Biden in the presidential election.

“The gold market is not priced for any of these outcomes right now. It won’t take all three events to drive gold higher. Any one would do just fine. But none of the three can be ruled out.”

OK, about the big upside surprise in those May job numbers…

The “expert consensus” among dozens of economists polled by Econoday was looking for a loss of 7.7 million jobs during May. Instead, the Labor Department’s statisticians conjured a gain of 2.5 million jobs.

On the big chart from Calculated Risk, comparing the job losses and comebacks from every recession since World War II, it looks as if the proverbial V-shaped recovery is underway. (Click to embiggen if you want to delve into the history…) 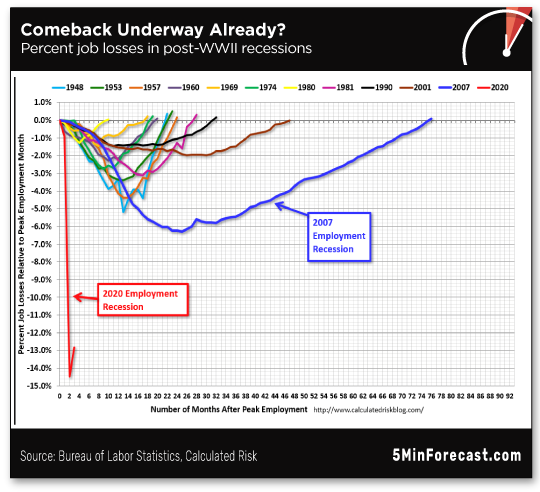 Still, one month never tells the whole story. And even on this robust trajectory, we wouldn’t be back to breakeven for almost another year.

But the likelihood of a continued “V” is mighty slim. As economist Joseph Brusuelas of the auditing firm RSM US points out, “All of the gains were those recalled to work. Those not on temporary layoff, the number of permanent job losers continued to rise, increasing by 295,000 in May to 2.3 million.”

And with the market firmly in the grip of an it’s-no-longer-getting-worse narrative… stocks are on a tear.

The good vibes are carrying over into crude — now just 85 cents away from the $40-a-barrel mark. It was only a week ago today our floor-trading veteran Alan Knuckman was telling us $40 was in sight.

It’s official: Your editor can legally get a haircut again in five more days.

As of three days ago, Michigan and New Jersey were still the only states with statewide orders keeping barbers and hairdressers closed, per research by NPR. (In eight other states, it varies by region.)

But this morning, Gov. Gretchen Whitmer announced they can reopen next Wednesday in Michigan’s northernmost 32 counties.

When we detailed Whitmer’s arbitrary and capricious lockdown orders in mid-April, we pointed out her deference to the “Listen to the scientists!” drumbeat… even as we noted how “the science” is frequently more squishy than “the scientists” would have you believe.

➢ Pro tip from an MD we read recently: Do a search for “peer-reviewed scientific papers withdrawn.” It’ll blow your mind. And we saw that before the news yesterday about The Lancet retracting its much-touted article playing up the fatal risks of hydroxychloroquine.

“Whatever data exists… to keep hair salons and barbers locked down… it has not been revealed to or shared with the public,” writes Tom Gantert.

Mr. Gantert is with Michigan Capitol Confidential, a website affiliated with the conservative Mackinac Center think tank. Likewise, he points out there’s been no public release of data to justify the closing of pet groomers, which was finally lifted yesterday.

“The lack of clarity in the executive orders and Whitmer’s insistence that they are based on data raise more questions. Such as, where is the data showing that the governor should permit swimming pools to reopen while keeping barbers locked down?”

Asked about barbers and hairdressers Monday, Whitmer said, “That’s our judgment. My hope is that we turn that dial in two weeks and take that next step. Two–three weeks is what we think we need to see in terms of data.”

But as long as she and her coterie of advisers keep a lid on that data, it’s hard to shake the thought that either the data doesn’t exist or it has only the most tenuous connection to the hygiene requirements of barbershops and salons. Science? Data? Or making guano up as they go along?

Meanwhile, my sympathies to all the shaggy downstaters who with any luck can be shorn again later this month.

“Constitutional convention? No!” a reader replies to yesterday’s mailbag.

“One of your readers is eager to call a constitutional convention to pass an amendment forcing term limits on congresscritters.

“I think that term limits would be a good idea, but I don’t think that calling a constitutional convention is a good one. Once the convention is opened, who knows what might wind up on the agenda?

“Knowing our liberal-progressive friends, there would be calls for amendments enshrining all of the goodies on their wish list: abolishment of the Electoral College and of private ownership of firearms, open borders, guaranteed income, free pre-K–Ph.D. education, universal health care, more taxes on productive citizens, need I go on?

“The lib-progs are masters of dirty tricks and kicking off on their opponents’ 20-yard line. If only just a few of their pet projects become part of the basic law of the land, it’s Katie-bar-the-door.”

There was a time, not that many years ago, when most conservatives were appalled at the notion of a “con-con,” for the very reasons you enumerate.

Somewhere along the line that began to change, with some of the movement’s leading lights advocating a con-con for the purpose of passing a balanced-budget amendment. (Maybe because they realized phony-baloney “fiscal conservatives” like Paul Ryan would never have the discipline to pull it off?)

But yes, calling a con-con for any purpose has the potential to open Pandora’s box. Best not go there.

Meanwhile, your editor has soured on term limits — for reasons I happened to lay out here exactly a year ago today. We have a long-term experiment in how they work, or don’t.

Here in Michigan, term limits on the state level came into effect after the 1992 election — six years for representatives, eight years for senators.

The decades since have given rise to a legion of legislative aides and lobbyists — many of whom pass through a revolving door, over and over.

With an ever-changing cast of characters among the lawmakers, these full-time “professionals” become the ones who know how to game the system… where the bodies are buried… in general, how to “get things done.” For their own benefit, of course.

Meanwhile, by the time the people’s representatives figure out where the restroom is, their time is nearly up.

Better than a con-con or term limits would be to expand the size of the U.S. House by at least an order of magnitude.

The Founders envisioned congressional districts encompassing no more than 50,000 people and maybe as few as 30,000. Government close to the people.

But the House has been frozen at 435 members since 1911 and the country’s population has more than tripled since. The typical representative now “represents” more than 700,000 people — as vivid an example as any of how the federal government has become ever more remote from the people. 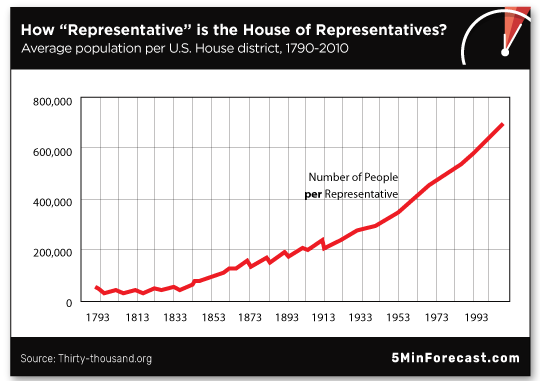 That chart comes from the quirky but utterly earnest website thirty-thousand.org — which advocates passionately for a return to something approximating the Founders’ original numbers. (It appears to be a one-man project, and the site hasn’t been updated in perhaps 10 years.)

Yes, that would require many more districts and representatives. Even using the upper end of the Founders’ 30,000–50,000 range, you’re looking at more than 6,500 congresscritters. How could you possibly stuff ‘em all into the U.S. Capitol?

Of course you can’t. But as the website points out, “It is no longer necessary, or even advantageous, to require that all representatives convene in one location (nor is it explicitly required by the Constitution). Current technology makes available a host of other means for virtually assembling and voting on bills.”

Amen. And think how much harder it would be for lobbyists to do their thing if they had to disperse their efforts all over the country, button-holing 6,500-plus House members.

Alas, the current power structure is such that it will never let this happen. The website says the only way such a system could come about would be… a constitutional convention.

P.S. With today’s monster stock rally, it’s been a great day for readers of The Profit Wire — the service where I team up with trading phenom Alan Knuckman to identify market-moving news before it, well, moves the market.

Yes, there’s more where that came from. Our next recommendation comes out when the market opens Tuesday morning. I’ll walk you through how our system works when you click here.