“Would the banking system collapse?” he continues. “Was there going to be another recession? Nobody knew.”

James says, at the time, the bottom had just dropped out of the S&P 500 Index by 10%. And the day after it happened, CNBC called James for an interview… or more like a debate. James versus NYU economics professor Nouriel Roubini, who was celebrated for predicting the Great Recession of 2008. 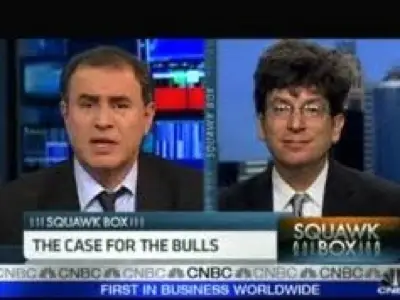 In a 2011 article at Business Insider, James recalled: “I had been shaking all through the segment. Nouriel was so determined in saying the market was going down 20–30% and I was convinced that the media… and the economists were all trying to spread fear just so they can keep their own businesses going a little while longer.”

In contrast, James forecast the market was going to bounce straight up off recent lows.

In the article, James reminisced: “I wanted to help people be optimistic. But the market had been going down for three straight months… Everyone [had] had a very hard decade. 9/11, Enron, housing crisis, financial crisis, etc., etc., etc. Not many people [had] been very happy with the results of this decade, including me. But we have to continue to innovate, provide for our families and not let the greed and fear that the media and the economists foist on us scare us out of our sanity.”

(Emphasis ours because, yeah, timely advice.)

“What actually ended up happening?” James says. “The market has never gone lower than the day before Roubini and I went on.

“My theory was this,” James says: “Trillions of stimulus had entered the economy and we hadn’t felt the results of that yet.

“People think when the Federal Reserve takes action that the market will go straight up — but this isn’t true,” he says.

“The Federal Reserve sets the conditions for a higher stock market by pushing interest rates lower, but it doesn’t really hit the economy until banks start lending, which takes a while,” James notes. “Could take 24 months.”

James maintains 2010 history will repeat a decade later. “I’m not saying things are easy from here,” he says. “There is a lot of uncertainty. But here are a few things we know:

James continues: “There are several categories of companies that will go up in the current stock market.”

First, companies that are going strong because of the pandemic. Next, James says: “Companies that should never have gone down because they are somewhat disconnected from the consumer economy.”

Last: “Companies that went down too much [because] they [were] affected by the lockdowns,” says James. “They were punished too much by investors.”

James goes on to cite a few examples. “Now, I’m not officially recommending these companies,” he says, “but I want to discuss the following companies to teach you about the situations I like to look at”…

“Again, these are not [my] official recommendations,” says James. “But these are the sorts of stocks I’m looking at now: under-the-radar smaller stocks with good cash positions, good investors and good prospects in the new normal that I think were unfairly hit.

“Most of them,” James says, “are economy-independent and will benefit even more from federal stimulus.”

“But the investors who do well right now will lean into this uncertainty and analyze offbeat investments that will pay off in the long run.”

[Ed. note: This isn’t the first time James has traded in an extremely volatile market, but what he’s accidentally discovered changes everything.

It’s crucial you catch his latest update about life and making money in a post-coronavirus world.

James reveals exactly what readers should be doing to help protect their money and how they can even profit from his latest discovery.]

“I have a feeling there’s going to be a lot of debate about the economy versus the market this week… how long it will actually take to reopen and rehire the millions of Americans who lost their jobs and whether the market is getting too frothy with its expectations.”

The Nasdaq, according to Greg, has been the straggler: “We’ll have to figure out if we’ve really just seen a top (short-term or otherwise) in the tech trade, or if this is merely the leaders taking a break while the laggards continue to recover.” At present, the tech-heavy index is up 25 points to 9,838.

After The 5 went to virtual press Friday, the Federal Reserve issued its latest data on consumer credit. And the numbers only reinforce Jim Rickards’ thesis that Americans are… 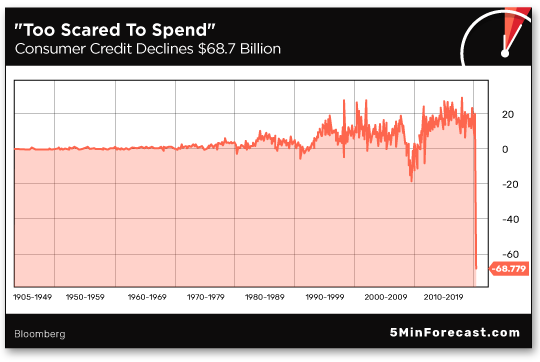 According to a WalletHub study: “Americans began 2020 owing more than $1 trillion in credit card debt after a $76.7 billion net increase during 2019. Consumers quickly changed course, however, posting the biggest first-quarter credit card debt paydown ever.”

Per U.S. household, the big payoff represents a 1.7% decrease, for an average credit card balance of $8,509. No great shakes…

And while Jim Rickards notes Americans have been depositing their federal stimulus checks in their savings accounts rather than spending on *insert luxury item here*… don’t think Americans will put a freeze on spending forever.

As James said above, that stimulus money is going to enter the financial system’s bloodstream at some point. The WalletHub study agrees; it “projects that U.S. consumers will… [end] the year with a net increase of $80 billion in credit card debt.”

Consumer spending: It giveth and taketh away…

“What you described is a sign that too many (maybe most) in our government have forgotten that they are supposed to be the servants and agents of The People.

“How do we help those in our government remember their proper role? While I believe casting a well-informed ballot is helpful at times, it also seems obvious that millions of people voting has not prevented fascism. (Maybe voters have been too manipulated by Big Money?)

“I think another important protector of our liberty that has been terribly eroded by The Establishment is the jury trial. The fact that so many have come to view appointed judges as the final arbiters of constitutional interpretation seems tragic to me.

“I think the Founders expected our juries to be trusted as much as our appointed judges. (Not that juries are perfect, but I think they are less subject to systemic corruption than the judges, bureaucrats and politicians.)”

The 5: Since you brought it up, we’re not certain precisely what the Founders expected from juries — all male, all white and all landowners, by the way. But point taken. A jury of one’s peers should operate as a prosecutorial counterbalance. Should. And perhaps a counterbalance to activist judges… But that’s asking a lot.

That’s only good through Wednesday, June 10, at MIDNIGHT.