“Whatever we can, for as long as it takes,” said Fed Chair Powell at a post-meeting presser Wednesday.

For the time being, the Fed doing whatever it can involves standing pat on near-zero interest rates… ad infinitum. (Well, for the next two years. At minimum.) And the Fed won’t dial back spending on U.S. Treasuries and mortgage-backed securities.

Meanwhile in this post-pandemic world of first-evers, we spotted this… 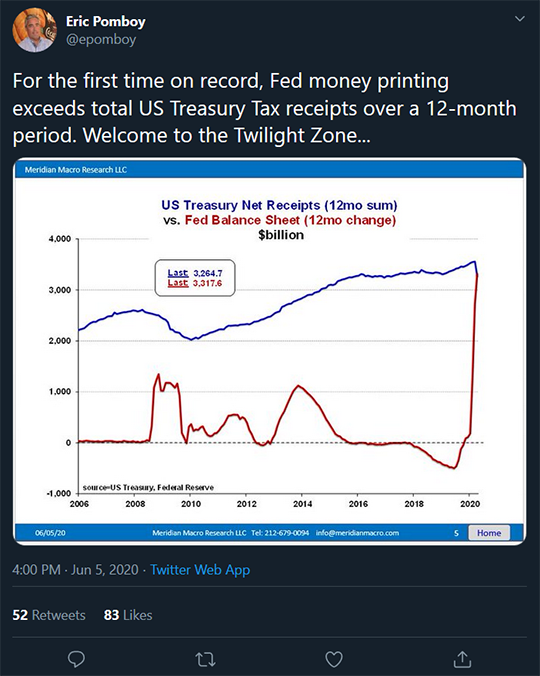 By the end of the year, the Fed’s balance sheet is expected to comprise about 40% of the U.S. economy, according to an article at Time. Compare that with 6% in 2007. The Twilight Zone, indeed…

Or to extend the conceit of the gamified market from yesterday’s episode of The 5, journalist Matt Taibbi says at Rolling Stone: “This financial economy is a fantasy casino, where the winnings are real but free chips cover the losses.”

According to Taibbi, it was Alan Greenspan who cranked up the activist Fed in the late 1980s, making an implicit promise that the central bank would backstop (free chips) even the most foolhardy market antics. A promise kept by his Fed successors to one degree or another in the decades after.

Speaking of Fed intervention, if you thought the Federal Reserve’s QE policy (money printing) was out of control after the Panic of 2008, the Fed’s approach was actually restrained…

Here’s one Great Recession-era example: “Nearly 3 million people filed for foreclosure in 2010 alone,” Taibbi says. “Back then, the notion of using state funds to rescue these folks was rejected as laughable, a dangerous ‘moral hazard.’

“As billionaire Charlie Munger put it in 2010, homeowners needed to ‘suck it in and cope’ and not wait for a handout.” (No words… that I can use in this publication.)

Sooo… the Fed was close-fisted when it came to Main Street but not so much for Wall Street, as the central bank doled out trillions in free-money bailouts for banks and other too-big-to-fail institutions.

“The dubious underlying logic was that rescuing the economy and rescuing the financial markets were the same thing,” says Taibbi. “To save people, we had to save the economy in which they operate, which meant saving the high-risk investments of Wall Streeters, as much as they might suck.”

That was then and this is now: “What’s happening in the COVID-19 crisis is the next step: a financial bubble where the Fed isn’t the cleanup mechanism,” Taibbi claims, “but the source of the mania itself.”

Taking it a step further, former Wall Street banker Nomi Prins says: “The Fed is the market, and all the big players know it, while the real economy… [staggers] far behind.”

In a recent interview with The 5’s founder Addison Wiggin, Nomi continues: “I think it’s really important to separate what the financial market does [from] what the real economy does. Because those two things have literally not been on the same plane since 2007.”

If anything, now the real economy and the financial market are more dislocated than ever. “At one point [the Fed] added $22–23 trillion… into the system,” Nomi says, “hoping it fixes the economy.”

“So we have this artificial fabrication of money,” — something Nomi calls dark money — “that’s plastered over… old debt problems.”

The risk to the real economy?

Nomi says: “Those multitrillions of dollars… have been created — fabricated — not out of real productivity or real economic benefit.” To wit, one of the most significant risks to the economy, as Nomi sees it, is historic numbers of unemployment at a rate “we did not have… during the Great Depression.”

And since it’s Thursday, no time like the present to take a look at the latest stats from the U.S. Department of Labor… 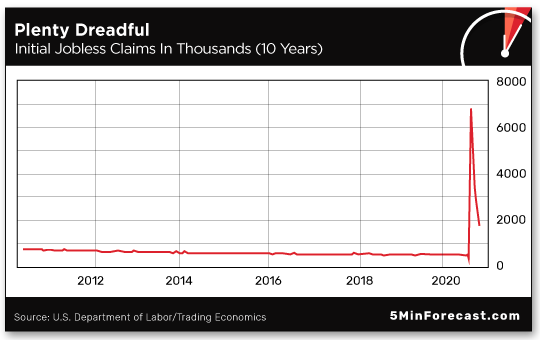 Initial jobless claims were down last week over the previous, falling from 1.9 million to 1.54 million. Applications for unemployment benefits peaked in March and have decreased steadily since. That said, there are still almost 21 million people out of work.

“Almost 20% of the population has filed for unemployment claims,” Nomi says. “And it is not clear that many of them are going to get their jobs back.”

Something Powell addressed Wednesday when he said: “My assumption is that there will be a significant chunk, well, well into the millions of people who don’t get to go back to their old jobs, and there may not be a job in that industry for them for some time,” he said. “It could be some years before we get back to those people finding jobs.”

It doesn’t get much more real economy than that…

As we mentioned yesterday, a recession’s already visited us. Nomi goes further: “It’s more like… a depression.

“And then we have just a plateauing” of the real economy… but with the market — and mountains of debt — “bolstered by the central bank’s dark money,” Nomi concludes, “I think it’s going to take a long time.”

[Ed. note: If you can’t fight the system, you might as well try to turn it to your advantage, and because former Wall Street insider Nomi Prins has a finger on the market’s pulse…

She’s discovered that opening trades during 92.3% of the trading day could hold you back from seeing explosive gains.

To learn how to take advantage of the prime 7.7% of the trading day — and the chance to double your money in less than 24 hours — click here to see Nomi’s recently released research.]

Taking a look at the market today: What in the actual hell?

Yesterday’s issue of The 5 has proven timely. Who said “stocks only go up”? Yeah, it’s all fun and games… until it’s not.

CNBC says: “Bubbly price moves in the stocks of bankrupt companies, a jump in the number of bullish investors and surging activity by small investors in stock options are all signs that the stock market may have run too far, too quickly.”

Peter Boockvar of Bleakley Advisory Group says: “It just tells you right now, at this moment in time, there’s a lot of speculative behavior that should be heeded in the short term.”

“The weak financial condition of… U.S. public pension plans threatens to deplete their assets by 2028,” says an article at the Financial Times.

For pensions that hadn’t even recovered from the last recession over a decade ago, the corona-crash has further stressed pension plans. “Public plans with extremely low funded ratios in 2020 may face the risk of running out of assets in the foreseeable future if markets are slow to recover,” says Jean-Pierre Aubry of the Center for Retirement Research at Boston College.

Two of the most vulnerable pension systems? The New Jersey Teachers Pension and Annuity Fund and, unsurprisingly, Chicago’s Municipal public pension, which is just 21% funded this year — a figure that’s likely to bottom to a god-awful 3.6% by 2025. “This would leave assets to cover just three months of the fund’s retirement payments,” FT reports.

The prognosis for New Jersey Teachers pension is only slightly better, with its funded projection to sink to 23.2% over the next five years, leaving enough assets to cover pension payments for about 19 months.

Looking at the glass half-full however: “Mr. Aubry did not expect any U.S. public pension plan to run out of money over the next five years,” FT says, “but more severe problems could then emerge.”

After five years? “The crunch point of a plan running out of assets is known as the ‘depletion date.’ After this point, a U.S. plan would move to a so-called ‘pay-as-you-go’ arrangement where retirement benefits are paid solely from contributions by employers and employees.”

Actuary Les Richmond of Build America Mutual says: “Reaching an actual depletion date can have a severe impact on a state’s finances because a sudden transition to a pay-as-you-go plan may result in costs [benefit payments to retirees] that far exceed recent employer contributions.”

We’ll keep you up to date…

Three restaurants on the Las Vegas Strip are getting creative when it comes to making up for coronavirus shutdown losses.

In a city known for tacking on a raft of hidden fees — a “resort tax,” for example — this is a new one… 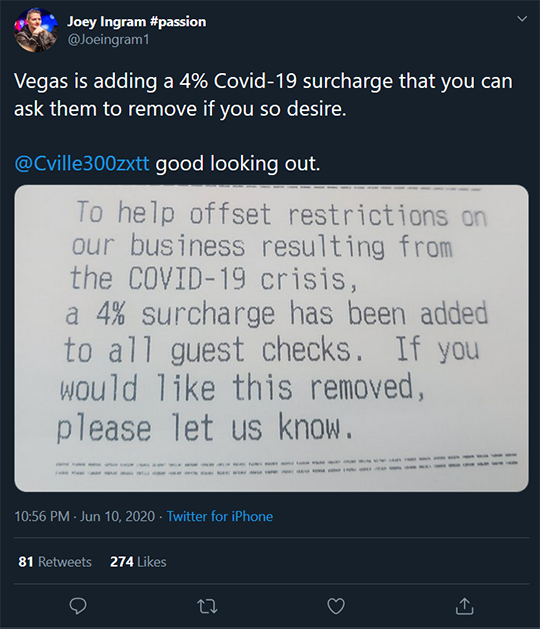 While the waiter won’t mention it when he drops off a check, a notation at the bottom explains the surcharge that’s “voluntary.”

The real question is will this trend spread to locales outside Nevada… or is it true: What happens in Vegas stays in Vegas?

Per the June 5 episode of The 5, a reader remarks: “Just read your comments about term limits and the resulting empowerment of behind-the-scenes staffers, which I believe would result in less transparency of the government. At this point, not an outcome most individuals desire.

“As for increasing the number of members in the House of Representatives, I think you bring up several good points, as well as a valid counter to a con-con. As you say, bring the government back closer to the people. That might address some of the other issues that have been noted, such as gerrymandering, etc. But would standing House members approve such a bill?

“More House members would mean that special interests might need more money, or that being a House member might not be as lucrative, in terms of lobbying dollars, which, again, if you’re not a lobbyist or high-level corporate executive, might result in a more responsive government.

“Over time, Congress/HofR might need to be enlarged on a regular basis, to maintain a responsive government; however, this would involve additional funds for the legislative branch, which is counter to doctrine of the last 40 or more years.”

The 5: “Would standing House members approve such a bill?” We’ll assume that’s a rhetorical flourish…

Most people have no idea there’s something about to happen in the market, but for those who pay attention when the market opens… there’s money to be made.

All it takes is a few simple actions before 10 a.m. Click here to find out how easy this strategy is.