; “If I can save lives with very little risk to myself, I almost feel like: How could I not?” says 32-year-old Lehua Gray of Austin, Texas.

Ms. Gray belongs to an organization called 1Day Sooner. She’s among 28,000 people volunteering to take part in a “human challenge trial” for a coronavirus vaccine.

“It’s built on a deceptively simple premise,” says The Washington Post: “Researchers inject healthy volunteers with an experimental vaccine and then expose them to a pathogen. If the vaccine prevents volunteers from getting sick, the study can accelerate development of a promising formula.”

For the moment, any discussion of a COVID challenge trial is entirely hypothetical; scholars who ponder medical ethics aren’t yet ready to cross that Rubicon — even with willing volunteers.

And so the wait goes on…

“And as we are coming to understand, vaccine development in particular is perhaps the most challenging of all. It is also excruciatingly time-consuming; the record for a vaccine approval is four years, and yet here we are, entertaining the possibility of getting the job done in just 18 months.”

Little wonder the quest for a corona-vaccine is being likened to the Manhattan Project.

Why is the task so formidable?

“You might be surprised to learn that the failure rate for new drugs submitted to human clinical trials is on the order of 85–95%,” Mr. Gilder continues. “And that makes drug development a very expensive proposition.”

He points to research by the Deloitte consulting firm: Drug development costs nearly doubled from 2010–18… while the return on investment fell from over 10% to less than 2%. 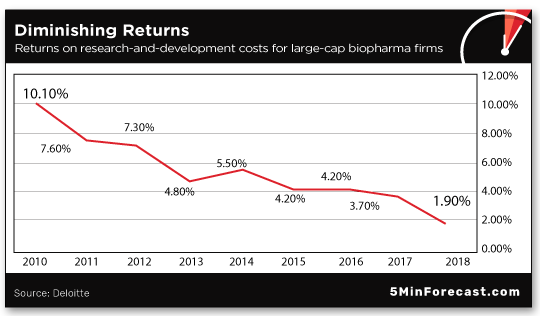 More grim numbers: “In 7,455 drug-development programs from 2006–2015, fewer than 10% of experimental drugs were found to be safe and effective and then approved for market,” according to an article published in Nature.

The odds are long under the best of circumstances. “Even when you’ve got meaningful biologic activity,” Mr. Gilder explains, “it doesn’t mean that it’s going to yield good clinical outcomes.”

A prime example is something we’ve chronicled in our virtual pages for nearly a decade — the spectacular failure of one late-stage trial after another for an Alzheimer’s treatment, even though “the science” appeared rock-solid.

And earlier in the process, there’s the even trickier question of deciding which compounds to submit to human trials.

“What are the phenotypes and genetics of the patients? How does the variability across the population influence those things? Are there biases in the selection process? Are there socioeconomic factors that influence who gets into trials? Are the sample sizes large enough to detect the signal of therapeutic effect? Is there sufficient funding to properly power the trial?”

George has identified a company for his premium Gilder’s Moonshots service that uses artificial intelligence to speed up the answers to those questions.

Of course, we’re reserving the name of that company for his paying subscribers. But what we’re describing today is just one small example of the research and thought process that goes into every one of his “moonshot” plays.

Another example is the “15G” stocks that he says have triple the return potential of 5G technology plays — which he explains in detail when you click here.

For once, it’s just a sleepy summer day in the markets.

The economic number of note is housing starts — up 4.3% in May from April’s depressed levels. Permits, a better indicator of future activity, jumped 14.4%.

An even more bullish number for the housing sector is mortgage applications — up 8% from the week before. Applications for new purchases are now 21% higher than a year ago. With a 30-year fixed available for an average 3.21%, why not?

Infuriating: U.S. banks have announced dividend payouts nearly twice their profits during the first quarter of 2020.

That’s according to figures from the FDIC — earnings of $18.5 billion, declared dividends of $32.7 billion.

With the pandemic putting banks under strain like everyone else, FDIC Chair Jelena McWilliams says her agency is keeping an eye on the situation and will step in to make sure banks “are not risking their balance sheets or risking safety and soundness” with their payouts.

A week from tomorrow, the Federal Reserve will release the results of its bogus “stress tests” for the too-big-to-fails — tests that are always stacked in the banks’ favor. Depending on the outcome, one or two banks might have to suspend their dividend for a quarter or two. Poor dears…

On the World War III watch, "India wants peace but when provoked, India is capable of giving a fitting reply, be it any kind of situation,” says Indian Prime Minister Narendra Modi.

Indian and Chinese troops tangled yesterday along their disputed border in the Himalayas, at an elevation of 17,000 feet. India confirms the deaths of 20 troops; unconfirmed reports say 43 Chinese troops were killed.

In general, the two sides try to keep tensions to a minimum by forbidding gunfire within 1.25 miles of the “line of control.” So by many accounts, the fighting was positively medieval. “They hit our boys on the head with metal batons wrapped in barbed wire," an Indian officer tells the BBC.

At least for the moment, neither side has fired a shot since 1975. They fought a full-on border war in 1962. China lost badly and hasn’t forgotten. Both have since acquired nukes.

We keep coming back to a passage from the book War at the Top of the World, in which the veteran foreign correspondent Eric Margolis wrote of a 1983 meeting with Chinese military brass in Beijing: "The Chinese security officials told me that they anticipated a military clash with India in the Himalayas or Karakorams early in the 21st century.”

Now they tell us: The CIA’s own “woefully lax” security led to the leak of its most valuable cyberweapons — the so-called Vault 7 documents.

An internal CIA report issued in 2017 became public yesterday, thanks to the dogged efforts of Sen. Ron Wyden (D-Oregon).

Little wonder the spooks wanted to keep it under wraps: “It said an employee stole anywhere from 180 gigabytes–34 terabytes of information, a haul roughly equivalent to 11.6 million–2.2 billion pages in Microsoft Word,” reports The Wall Street Journal.

The CIA’s elite hacking unit “favored building cyber weapons over protecting its own computer systems from intrusion,” the Journal summarizes. “The report said it was possible the CIA may have never learned of the theft had the trove not been published by WikiLeaks.”

The report more or less confirms what we told you at the time of the Vault 7 leak in spring 2017 — and what a debacle the CIA’s methods are for U.S. tech firms.

Here’s the essence of these cyberweapons: The CIA discovered vulnerabilities in the hardware and software produced by American high-tech companies. But rather than say to those companies, “Hey, we found this stuff — you might want to patch it,” they said to themselves, “Hey, what if we use this stuff to jack around with the Chinese and the Russkies and the Iranians?”

The fact that hackers might discover the same vulnerabilities and use them to jack around with you? The CIA couldn’t care less.

At the time, Reuters described how as soon as Wikileaks published the documents, engineers at Cisco were pulled off other projects “to analyze the means of attack, create fixes and craft a stopgap warning about a security risk affecting more than 300 different products…

“That a major U.S. company had to rely on WikiLeaks to learn about security problems well-known to U.S. intelligence agencies underscores concerns expressed by dozens of current and former U.S. intelligence and security officials about the government's approach to cybersecurity.”

And you just know the same scramble was going on inside every other big tech company at the time.

Sen. Wyden is pushing the intelligence community for answers about how it’s addressing these issues. We’re not holding our breath…

So no sooner does Zero Hedge return to Twitter than it’s been demonetized by Google.

As Emily mentioned in yesterday’s episode, ZH has been restored to Twitter after an absence of more than four months. We decried its removal at the time, even if we question ZH’s commitment to accuracy and probity.

Now comes word that ZH will no longer be able to generate revenue from any advertisements served by Google Ads — not because its articles about Black Lives Matter protests were problematic but rather because the site allegedly didn’t do enough to police the comments section beneath those articles.

That’s bad, but this is worse: Also under threat of demonetization is The Federalist — ominously, after it was ratted out by Establishment media.

Again, the comments section is the issue. But get this — NBC News crossed the line from reporter to participant in breaking the story: “Google blocked The Federalist from its advertising platform after the NBC News Verification Unit brought the project to its attention.”

Unlike ZH, The Federalist still has a chance to atone for its purported sins before the decision is final.

But my God: “That NBC has, and uses, the power to have sites it dislikes ideologically kicked off Google Ads is dystopian,” tweeted Glenn Greenwald yesterday. 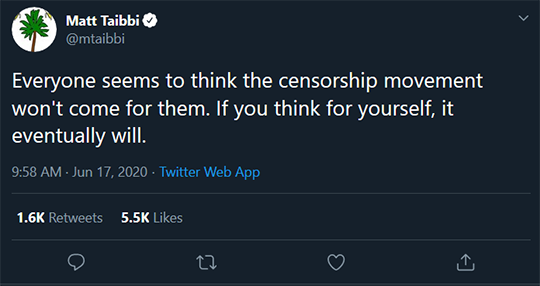 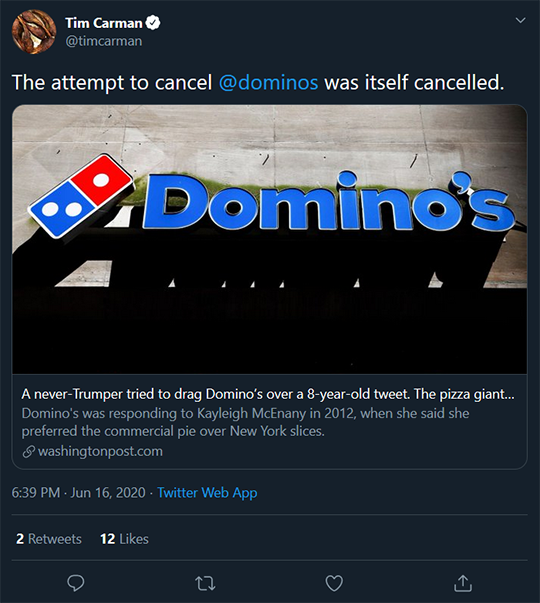 Our story begins with one Rick Wilson. He was a longtime Republican party hack whose signature accomplishment was making a campaign ad in 2002 during the buildup to the Iraq War. It slandered Sen. Max Cleland (D-Georgia) — a triple amputee from the Vietnam War — as unpatriotic and best buds with Saddam Hussein and Osama bin Laden.

Fast-forward to 2016 and Wilson becomes a Never-Trumper. These days, the MSNBC crowd can’t get enough of him.

Two days ago, for reasons known only to himself, Wilson dredged up an eight-year-old tweet from Kayleigh McEnany, currently the White House press secretary but then a 24-year-old nobody working behind the scenes at Fox News: “FUN FACT: @dominos is wayyyy better than any NYC pizza.”

Domino’s, being a responsive-on-social-media kind of company, responded, “That’s one heck of a compliment! Thanks for the love! #WEAPPRECIATEIT!”

Wilson reprised this exchange and then tweeted at Domino’s, “You just killed your brand.”

Mercifully, most of Twitter disagreed, even the liberal portion. And at The Washington Post, the headline was, “A Never-Trumper Tried to Drag Domino’s Over an Eight-Year-Old Tweet. The Pizza Giant Was Just Saying Thanks.”

Sensing the tide of public sentiment on its side, Domino’s chose to weigh in. We give them the final word on this one… 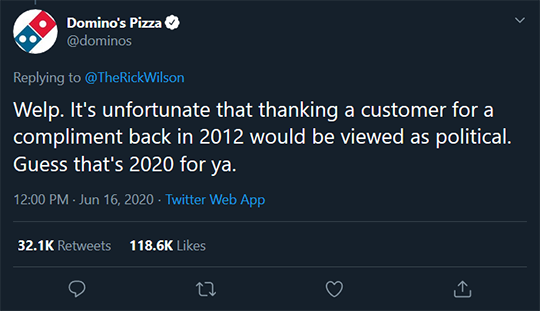 P.S. Make no mistake — we like 5G wireless plays around here.

But if it’s the big money you’re after, you’ll want to know about something that’s still off the mainstream’s radar.

Our resident futurist George Gilder calls it “15G” — because it has three times the profit potential.

And there’s still time to act before it becomes common knowledge and everyone’s bidding up the price of these 15G plays. Follow this link and see for yourself.