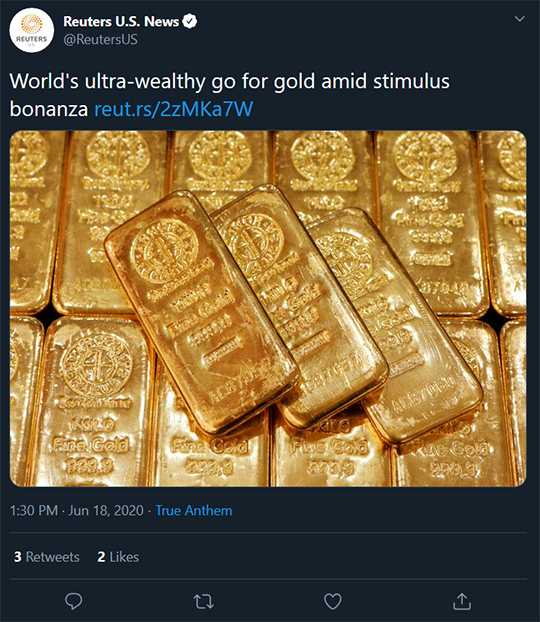 “As stock markets roar back from the coronavirus-led rout,” begins the Reuters story, “advisers to the world’s wealthy are urging them to hold more gold, questioning the strength of the rally and the long-term impact of global central banks’ cash splurge.”

Pre-pandemic, most private banks told their clients to ignore gold — or at most allocate just a tiny fraction of their assets.

“Now,” the story goes on, “some are channelling up to 10% of their clients’ portfolios into the yellow metal as the massive central bank stimulus reduces bond yields— making nonyielding gold more attractive— and raises the risk of inflation that would devalue other assets and currencies.”

Ten percent? Gee, that’s what Jim Rickards has been saying the entire six years he’s been part of our team. Now the advisers to the world’s wealthiest are starting to catch on.

“I’m now getting as many questions on gold as I do on oil, which says a lot from my perspective,” says John LaForge, chief of real asset strategy at Wells Fargo Investment Institute. “Most people are interested in renewables and oil and so on, and gold was often considered a relic.”

Reuters spoke with nine private banks, overseeing a total of $6 trillion in assets for the globe’s ultra-rich — and every one of them is advising clients to goose their gold holdings.

“The boost in demand could be a self-fulfilling prophecy for the metal’s price,” the story goes on, “as any shift in allocation from bond and equity markets, estimated at up to a combined $200 trillion, has a much larger impact on the smaller gold market, estimated at less than $5 trillion.”

For sure. And there’s plenty of headroom going forward. Here’s something Reuters didn’t include in its story — a chart showing gold as a percentage of all the globe’s financial assets. 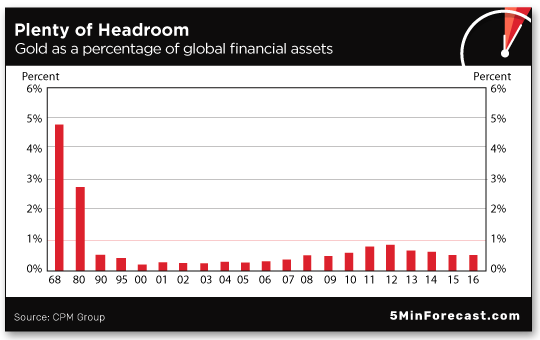 Imagine if the number gets only halfway back to the levels of 1980 — when gold reached a manic peak of $800 an ounce, a level that wouldn’t be seen again until 2007!

Oh, and the wealthy are seeking out the real thing — not ETFs or options or futures or any other form of “paper gold.”

“Most of the larger banks offer a gold bar storage service and eight of those questioned by Reuters said they had seen an uptick in demand, particularly in locations such as Switzerland and Singapore.”

But don’t get the idea precious metals storage is only for the rich. Our friends at Hard Assets Alliance make it accessible to you, too. You can take delivery — or you can opt for storage in New York, Salt Lake City, Zurich, London or Singapore. And it’s fully “allocated,” to use an industry term — which means your holdings aren’t pooled along with everyone else’s. It’s yours and yours alone.

As it happens, gold today is once again gunning for its highest weekly close in more than seven years — the bid now $1,741.

Stocks are also on the rally tracks, with all the major indexes solidly in the green and the tech-heavy Nasdaq once again flirting with record territory above 10,000.

“In what has been a moderately choppy week for stocks, eager traders continue to pound the ‘buy’ button,” says our Greg Guenthner.

“I counted more than 60 optionable stocks that posted new all-time highs yesterday afternoon. Remember, we’ve been talking about how traders were freaking out as some volatility crept back into the picture over the past couple of weeks.

“But they seem to be settling in as we approach the weekend, scooping up biotech stocks, China ADRs and, of course, red-hot software and megacap tech names. That’s right — we’re seeing the big tech stocks outperform again. The more things change, the more they stay the same…”

Still, we can’t help wondering if a pause in the rally is due when we look at this chart… 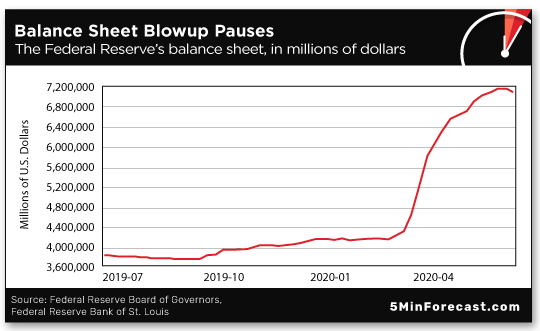 That’s the Federal Reserve’s balance sheet. As you’ll recall, the Fed has been buying financial assets willy-nilly since the corona-crash in March — Treasuries, mortgage-backed securities, municipal bonds, corporate bond ETFs and, as of this week, individual corporate bonds.

But a funny thing happened when the Fed issued its balance sheet statement yesterday afternoon: The total amount of assets held by the Fed fell slightly for the week ended Wednesday.

Yes, it’s still above $7 trillion, compared with less than $4 trillion a year ago… but a drop is a drop.

All that buying has done wonders to help prop up the stock market. But if this pause goes on a few more weeks?

The Fed’s balance sheet blowup has also managed to grow the wealth of America’s billionaire class by 20% in three months.

Or so we’d conclude from a report by Americans for Tax Fairness and the Institute for Policy Studies-Program on Inequality.

More remarkable numbers since mid-March: Twelve billionaires have at least doubled their wealth… and 29 people have entered the billionaire club. That brings the U.S. total to 643. Here are the five richest in a table we snagged from the think tanks’ report…

Man, look at Zuckerberg — up 59%. Faring even better were John Menard of the Menard’s home-improvement chain (65%) and consummate carnival barker Elon Musk (70%).

Tops among them all, however, was Trevor Milton of the electric-truck firm Nikola — up 526%, aided by his buzzworthy company going public just two weeks ago.

No, it hasn’t rolled a single truck off the assembly line yet. No need to make real products for people when the Fed makes so much funny money.

➢ Meanwhile, look at Buffett. 6.6%? That badly underperforms the stock market the last three months. Maybe Dave Portnoy of Barstool Sports fame is onto something in this new and zany era…

Call it The Siege at Prime Fitness — and we can’t help wondering if it’s a template for how a new civil war might play out.

But Prime Fitness has been up and running since mid-May — at 50% capacity, owner David Blondin hastens to add.

So far he’s racked up $7,000 in unpaid fines. This week, however, Oxford city fathers went nuclear — winning approval from a Worcester County judge to go in and change the locks, board up the doors and windows and… shut off the electricity and water.

Blondin is trying to keep it low-key, for now. “If they truly chose to do that as a town of Oxford, you know, it’s surprising to me that they’re trying to rip down a business like this,” he tells Boston’s ABC affiliate.

A few weeks ago, as the anti-lockdown protests were ramping up, we got to wondering whether utility shutoffs might become a means of enforcing compliance.

Then we forgot all about it until we read about the siege in Oxford today. Now we’re wondering about it again.

An especially vindictive governor, mayor, etc., could see fit to shut off utilities not just to individual offenders — but to entire neighborhoods where compliance is deemed insufficient.

Think about the peer pressure that could ensue: “You’ve got to stay in or else they’re gonna shut us all off for the next 12 hours!” It would be a return to elementary-school tactics of cutting recess in half when a handful of troublemakers get too noisy in class.

Of course, such measures wouldn’t necessarily be limited to lockdowns ordered on the grounds of public health. Depending on the circumstance, they could be enforced to achieve any number of desired ends. Who knows what the wokesters might come up with if they win control of city hall or the governor’s mansion?

Yeah, we know — don’t give the bastards any ideas. It’s advice we dole out ourselves to readers in the mailbag section of The 5. But on this occasion, we figure it’s more important to give you a heads-up…

➢ As we’ve mentioned before, India — “the world’s biggest democracy” — routinely shuts off internet and wireless service to unruly sections of the country. Kashmir went without for seven months ending in March.

From the obsessively-following-the-rules department we find this item about an 8-year-old boy in Switzerland who nearly got nailed for… well, read on.

The boy had collected play money during a carnival in Sissach — obviously pretend euros, and euros aren’t even the Swiss national currency. He went to a store in nearby Dietgen and asked if he could use the play money for a purchase.

The store manager called the police. “It is our policy,” she tells the Basler Zeitung newspaper; “we were instructed to do so by the headquarters in Winterthur.”

The police took the call very seriously, showing up at the boy’s house the next day — with stills from the store’s surveillance camera. The visit lasted three hours, ending with his mugshot being taken.

“The unnamed boy was not charged with any offense but his name will reportedly be on police records until May 2032,” says The Guardian.

Sorry, we’ve got nothing to add. Our inventory of both snark and outrage have been exhausted for the week. We’ll replenish over the weekend. One quick item from the mailbag before we go…

“I laughed so hard I had to take a screenshot to email all my friends about the WHO waffling on the subject of video games addiction,” a reader writes after yesterday’s 5.

Meanwhile, “Kudos for the new format,” the reader adds — “it really caught my eye. Did not thank you — awesome! Keep up the great work!”

The 5: So is YouTube going to take down a buncha videos now saying that excessive gaming is a mental disorder?

Since the two previously talked in April, much has changed in the economy and society — and not for the better. Is George still optimistic about the future? And if he is, why?

Your briefing is available now as an exclusive members-only benefit. For access, check your inbox for an email with the subject line “Part 11, Going Live Now.”