Let’s see if we’ve got the new rules right: Mere words can constitute “violence,” but deliberate property damage does not.

What follows for the first couple of our 5 Mins. today is not a fully thought-out argument. We’re fumbling in the dark for a light source so we can better see — however dimly — whatever it is in American society that’s become unglued in the last 10 days or so.

“The woke left's march through the institutions, from experimental liberal arts campuses to the most hallowed journalistic outlets, has been breathtaking in its speed and scope,” writes Matt Welch at Reason.

Indeed. The campus snowflakes of five years ago who were “triggered” by the mildest offense and who sought refuge in “safe spaces” are now swarming over the NY-DC-LA media complex.

Perhaps you’ve heard about the dustup at The New York Times that ended over the weekend with the resignation of the editorial-page editor.

The trouble began with the publication of an Op-Ed by Sen. Tom Cotton (R-Arkansas) advocating the deployment of U.S. troops to riot-torn cities.

An awful idea? From where we sit, absolutely — not least for reasons we laid out a week ago today. (We’re still getting feedback about that episode of The 5 — as you’ll see when you read on.)

But does that advocacy rise to the level of “violence”? From the standpoint of 800 or so NYT staffers who signed a protest letter, yes. Many of them issued tweets like this… 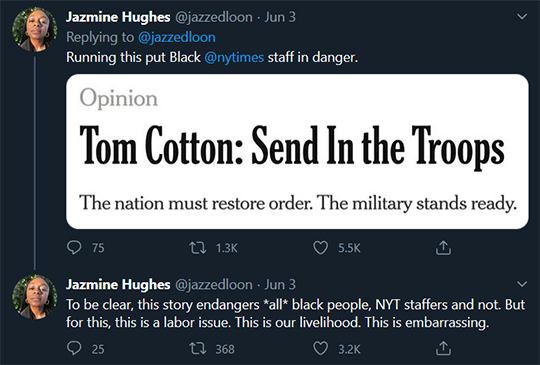 "It wasn't just an opinion,” said a NYT union activist, “it felt violent — it was a call to action that could hurt people.”

The senator’s article was published online Wednesday. By Sunday, editorial-page editor James Bennet “got quit,” as the saying goes.

“Bennet's resignation was an instructive show of force from those Times staffers who want the paper to be more transparently progressive,” writes Robby Soave, also at Reason.

“Their successful strategy — describe their opposition to someone else's speech as a matter of personal safety — is straight out of the woke left's playbook. Dismayingly, we should expect to see this tactic deployed more frequently in the future.”

Of course, the Times is a private company, not an arm of the government. (Not officially, heh.) It’s under no obligation to grant or deny a platform to anyone.

Still, if the Times is any indication, it seems as if the traditional parameters of free speech are being narrowed considerably.

We’ve explored the dividing line between speech and violence before. The Supreme Court laid out a sensible standard in 1969: Any speech is fair game “except where such advocacy is directed to inciting or producing imminent lawless action.” A good example, wrote Glenn Greenwald in 2011, would be ”standing outside someone’s house with an angry mob and urging them to burn the house down that moment.”

The Times staffers — and now the Times management who’ve yielded to the staffers’ demands — clearly have a different standard.

The flip side is that by this new and strange standard, an angry mob torching the house would not be committing an act of violence.

We’ve seen this time and again in recent days among “woke” public intellectuals when describing the rioting. Chief among them is Pulitzer prize winner Nikole Hannah-Jones, a Times writer and organizer of the campaign objecting to Sen. Cotton’s Op-Ed.

“Destroying property, which can be replaced, is not violence. To use the same language to describe those two things, I think is really not moral to do that,” she told CBS’ digital outlet CBSN.

“Any reasonable person would say we shouldn’t be destroying other people’s property, but these are not reasonable times,” she went on. “You can’t say regular citizens should play by the rules when agents of the state are not.”

We agree these are not reasonable times and agents of the state are flouting the rules. But Hannah-Jones seems to draw no distinction between wanton acts of destruction — likely as not afflicting small businesses owned by people of color — and acts that target the instruments of state oppression.

This too we’ve explored before — the well-targeted Stamp Act protests of 1765 are enormously instructive.

And don’t get the idea that it’s just journalism where the woke mentality is taking hold and you can insulate yourself by avoiding certain news sources: There’s also health care.

Last week we took note of the rather glaring contradiction between government officials’ edicts to avoid large gatherings in the interest of containing coronavirus — many of which are still in place today! — and those same officials’ support for the large-scale protests.

But it’s no contradiction at all, says a Johns Hopkins epidemiologist…

Nor is she alone. More than 1,000 public health experts signed an open letter saying the same thing: "As public health advocates, we do not condemn these gatherings as risky for COVID-19 transmission… This should not be confused with a permissive stance on all gatherings, particularly protests against stay-home orders.”

As Adam Serwer of The Atlantic tweeted, “The virus doesn’t care about why someone is protesting and the risks shouldn’t be downplayed because the cause is just.”

Here we end our fumbling around for a light source. We’re not sure if we have any better handle on what’s become unglued in American society the last 10 days or so. But it sure seems some people have a fluid definition of concepts essential to the American experience — indeed essential for human thriving — like free expression and private property.

In the meantime, the major U.S. stock indexes are moving in opposite directions today.

The tech-heavy Nasdaq is pushing higher into record territory, up half a percent to 9,970. But the Dow and the S&P 500 are pulling back as much as three-quarters of a percent.

With any luck, the worst is over for small business.

The National Federation of Independent Business is out this morning with its monthly Optimism Index. After April’s epic drop to 90.9, the number ticked up in May. At 94.4, the index is no worse than it was in most of 2016 or much of the period from 2012–14. 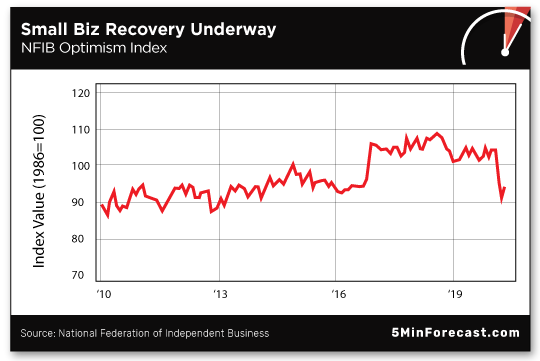 “Owners are optimistic about future business conditions and expect the recession to be short-lived,” says the NFIB’s summary.

➢ Speaking of the recession, yesterday the National Bureau of Economic Research confirmed the economy topped out and tumbled into recession in February. At least they’re not too late to the party; they didn’t call the “Great Recession” until December 2008, a year after it began.

Asked about their single-most important problem, the not-surprising leader is “poor sales,” cited by 18% of survey respondents. But go figure: In second place, 17% say they’re having trouble finding qualified help… with the ever-present taxes (15%) and regulations (14%) close behind.

OK, this could be interesting: The Pentagon versus Netflix.

As you might know, the president told the Pentagon to form a Space Force in 2018 — a sixth branch of military service.

According to The Hollywood Reporter, “The streaming giant has outmaneuvered the U.S. government to secure trademark rights to ‘Space Force’ in Europe, Australia, Mexico and elsewhere. Meanwhile, the Air Force merely owns a pending application for registration inside the United States based on an intent to use. Meaning that the feds have gotten a place in line but no confirmed trademark rights thus far.”

No, it’s not a huge problem — people aren’t going to confuse one for the other — but it’s a little problematic when it comes to the merch: “The trademark could play into merchandise confusion if clothing or a mug, for example, were to hit stores and customers were curious as to who was actually selling the goods,” says The Hill.

But as far as the Air Force is concerned, it’s all good: "We wish Netflix and the show's producers the best in their creative depiction of our nation's newest branch of the military."

To the mailbag, and an accusation of selective statistics after Jim Rickards’ latest take on the prospects for gold…

“Selecting 1971–1980 and 1999–2011 to make the case for gold, but leaving out the 20-year dearth that lies between those two periods is an example of how stats can be manipulated to make whatever point one wants to sell.

“The fact is that even at $2,000 per ounce gold will not have kept up with inflation for the last 40 years.”

The 5: To be clear, we cited those two periods as gold’s previous bull markets… and Jim believes the current bull began in December 2015 when gold bottomed at $1,050.

And in any event, Jim believes gold is only part of a well-balanced portfolio — 10% is his preferred allocation.

“I don't know about the other stocks Mr. Altucher mentioned but I know WTRH pretty well,” a reader writes in reply to yesterday’s episode.

“Suffice it to say, I recommend deep due diligence on that one, although a shallow glance should be enough. The debt that Luxor converted into shares was priced at $1.34 a share, I believe. It becomes free trading on June 12. I expected something out of the company to provide price support but I didn't expect to see it mentioned in The 5.”

“From an ethical and commercial standpoint, our analysis is free, but the recommendations remain the province of paying readers,” says Addison Wiggin, who founded this e-letter in 2007.

But once in a while we’ll throw out a name for your consideration while still reserving “the good stuff” for paying subscribers.

OK, a response to last Tuesday’s 5 that we fully expected, although it was late in arriving…

“I was shocked and dismayed that you bashed the police but did not discuss the criminals wandering the streets killing and injuring policemen. You try walking in the shoes of a policeman and I will listen to you. Otherwise, keep your left-wing communist opinions out of this normally well-thought communication.

“Did you know that in 2019, 89 policeman were killed in the line of duty? Did you know that 29 citizens were unarmed and killed by police? Full 19 were white and 10 were black and in over half of these situations the policeman was arrested and convicted. This is a riot looking for a problem.” 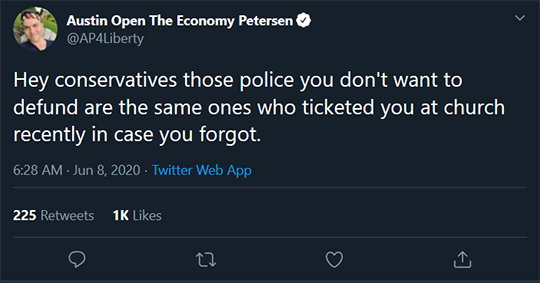 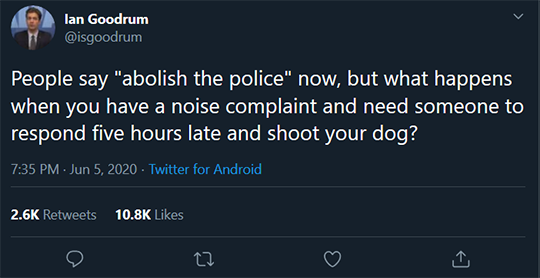 Meanwhile, as we’ve pointed out before, loggers and commercial fishermen die on the job at far higher rates than law enforcement — which doesn’t even rank in the top 10 fatal occupations.

Then there’s this: How did the Founders’ generation get along without an institution known as “police”? Did something change in the intervening centuries? And if it did, are there lessons from the Founders’ experience that we could still apply today?

P.S. Sheesh, and we still haven’t gotten to the reader emails about constitutional conventions, term limits and a 6,500-member House of Representatives. We’ll aim for it tomorrow!