Beating Buffett (at His Own Game)

The good news is that after today, the year 2020 will be half over.

The bad news is there’s still another half left and who knows what it will bring? Here’s one “bingo card” we scraped from the web… 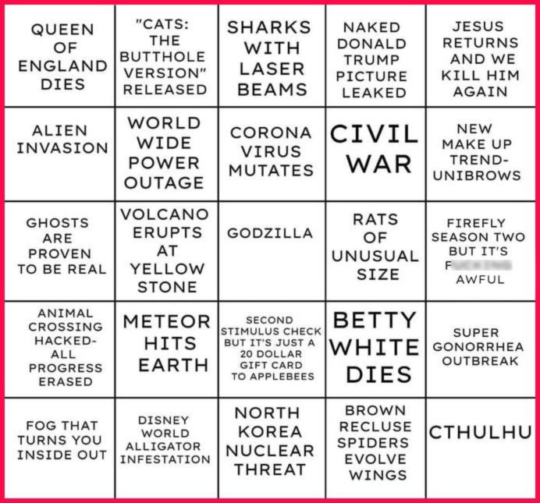 It’s been a lousy first half of 2020 for Warren Buffett, that’s for sure… 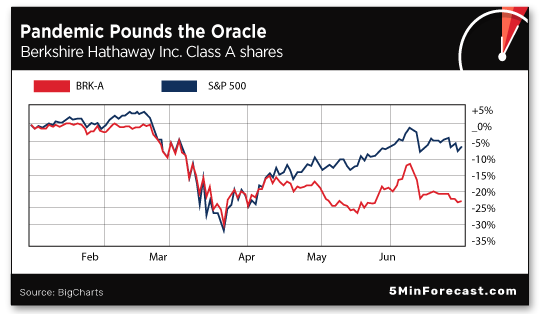 After the corona-crash in March, Wall Street is set to log its best quarter ever at day’s end. Buffett’s Berkshire Hathaway empire will be lucky to break even.

“The insane market rebound that followed the spring economic shutdown has left some of the best investors and economists scratching their heads,” observes James Altucher — our hedge fund and venture capital veteran.

In a “normal” crash scenario, Buffett would have seized on the opportunity to scoop up quality companies at bargain-basement prices.

But as he fessed up at BRK’s shareholder meeting in early May, he didn’t see any such opportunities as he surveyed the bombed-out landscape.

“Before we jump to any conclusions,” says James, “it’s important to consider Buffett’s biases and agenda.”

James has been studying the Oracle for decades — even wrote a book about him, Trade Like Warren Buffett. James knows the down-homey, burger-chomping, Cherry Coke-swilling bit is strictly for public consumption.

“Beneath his carefully manicured public image, Warren Buffett is a cold-blooded killer. You don’t become one of the world’s richest people without a few skeletons in your closet.

“The trick to really understanding Buffett is to always watch for hidden agendas.”

As you’ll recall, it’s the new generation of retail investors — the so-called “Robinhoodies” and the likes of Barstool Sports founder Dave Portnoy — who were the ones scooping up airline shares at bargain-basement prices.

Oh, and not-so-subtly dragging Buffett on social media as a has-been. As Portnoy put it, tongue only partly in cheek, “I’m the captain now.”

So what went wrong? Let’s briefly revisit Buffett’s rescue of Goldman Sachs during the Panic of 2008.

“For the privilege of borrowing $5 billion during the height of the financial crisis,” James says, “Goldman shareholders ended up paying $9 billion to the Oracle of Omaha. Not too shabby for Buffett, but not exactly a cheap deal for Goldman.”

To be precise, Buffett plowed $5 billion into Goldman in exchange for preferred shares yielding a 10% dividend — knowing the Federal Reserve would step in sooner or later with a rescue.

That’s the “cold-blooded killer” James refers to. It has nothing at all to do with the “anyone can invest like Buffett” mystique he cultivates. A deal like that is nowhere to be found in the 725 pages of Security Analysis by Buffett’s professor and mentor Benjamin Graham.

But here in 2020, “the Fed beat good ol’ Buffett to the punch,” says James. “Rather than letting Uncle Warren bend airlines over a barrel, the Fed jumped in and directly gave airlines the bailout they needed to keep flying temporarily. So Buffett dumped his stock.

“Unlike 2008, the Fed moved very quickly with the pandemic response. Before long, the Fed had started buying bonds in companies, mortgage-backed securities and all sorts of investments in order to keep markets from crashing.”

“With a market cap of over $400 billion, Berkshire Hathaway needs to make huge investments to move the needle. The number of opportunities large enough for Buffett to care about is extremely small.

“On the other hand, if you’re an investor who might be happy making an extra hundred, thousand or ten thousand dollars, the number of possible investment options you have is enormous.”

Berkshire’s huge size is further hampered by Buffett’s aversion to technology stocks; Buffett has long said he likes to invest only in things he can “understand.”

“With technology and communication companies now representing more than 38% of the S&P 500,” James goes on, “Buffett may need to adapt his investing approach to include more technology investments to keep up with the index.”

Tech companies tend to flame out quickly — whether they’re AOL two decades ago or the headset-camera maker GoPro in more recent times.

And yet… “Although tech companies may not last a hundred years the way Buffett prefers to invest,” says James, “it actually is reminiscent of an early Buffett strategy that he has long given up on.

“Early in his career, Buffett preferred to invest in what he called cigar-butt stocks,” James explains.

As Buffett put it in his own words, “If you buy a stock at a sufficiently low price, there will usually be some hiccup in the fortunes of the business that gives you a chance to unload at a decent profit, even though the long-term performance of the business may be terrible.

“I call this the ‘cigar butt’ approach to investing. A cigar butt found on the street that has only one puff left in it may not offer much of a smoke, but the ‘bargain purchase’ will make that puff all profit.”

We give James the last word: “Applying this to technology companies, investors could look to find companies that may not last forever but have one good puff.”

[Ed. note: If Buffett shies away from technology because it’s not easily understood, then he’d want nothing to do with the trading algorithm James has developed and perfected.

James shows you how it works when you click here. Please note the link will go dead once the market opens tomorrow morning at 9:30 a.m. EDT.]

As the quarter winds down, the major U.S. stock indexes are adding to their gains.

Actually, nearly every asset class is rallying on this final day of Q2. The 10-year Treasury yield sits at 0.635%… and gold is rallying to $1,784, nearly an eight-year high.

Traders are keeping half an eye on Fed Chair Jerome Powell’s midday testimony to Congress. Can’t rule out the possibility he’ll say something that will either spark or spook the market before day’s end.

Here we go with another real-life, real-time experiment in shutting down mobile payments.

The stock exchange was shut down yesterday… but of more importance to everyday folks is that all mobile money transfers have been suspended.

The country’s information minister says the government is in "possession of impeccable intelligence” that points to “illegal activities” causing the black-market exchange rate to blow out. “Phone-based mobile money systems… are conspiring with the help of the Zimbabwe Stock Exchange — either deliberately or inadvertently — in illicit activities that are sabotaging the economy.”

Sounds like finger-pointing to cover up the government’s own mismanagement. Same as it ever was.

What’s been lacking so far are on-the-ground reports of how everyday people are trying to get by. International media organizations have been hollowed out and foreign correspondents are few and far between; local media outlets are getting by hand to mouth.

Obviously in light of everything that’s been happening in this first half of 2020, you might wonder if such a scenario could play out in the United States. Jim Rickards says the unequivocal answer is yes; his action plan to protect yourself is here.

Go figure: The Trump tax reform has had no major effect on charitable giving after all.

According to an annual report from Giving USA, Americans contributed nearly $450 billion to charitable causes last year — a record, at least before adjusting for inflation.

Within that total, individual contributions amounted to $310 billion, also a record. 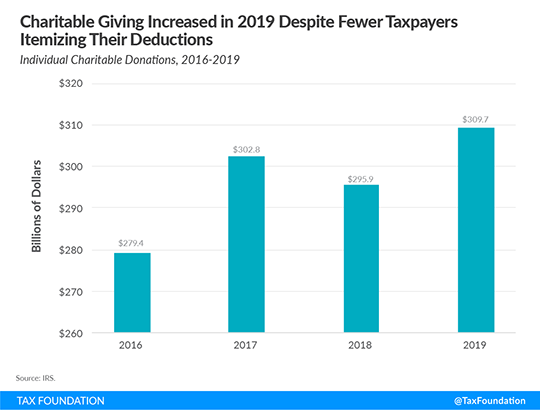 “This was not supposed to happen according to many in the charitable community who predicted that the Tax Cuts and Jobs Act (TCJA) would lead to less charitable giving,” writes Scott Hodge of the Tax Foundation.

Recall the standard deduction was nearly doubled. That means the number of people who itemize collapsed from 46.5 million in 2017 to 18 million in 2018.

But it turns out the tax deduction is not the major motivation for charitable giving, after all. “People donate when they have more after-tax income and when the economy is strong,” says Hodge.

Of course, the lockdowns have thrown all of that into a cocked hat this year. “The record shows that giving tends to decline during each recession since 1980, although many of these economic events corresponded with changes in tax policy,” Hodge offers, “so it would take more analysis to tease out cause and effect.”

Our daily quest for “quirk” from the business world takes us north of the border, where… 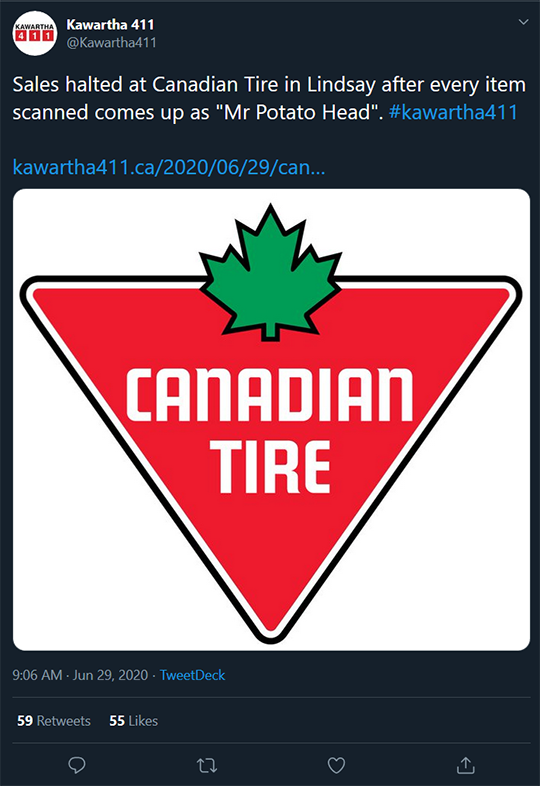 Its name notwithstanding, Canadian Tire is much more than a tire place. It has more than 500 locations selling everything from hardware to housewares. And toys.

The location in Lindsay, Ontario, ran into trouble yesterday — every item, no matter what, showing up on the checkout scanner as a Mr. Potato Head. “No sales were being made and customers were forced to leave empty-handed, according to witnesses,” reports a local website.

Company headquarters says four other stores were affected. “A point-of-sale downloading error caused item names to appear incorrectly, however, item prices and item numbers were registering correctly. It has since been corrected and the stores are operating normally.”

OK, but if someone actually wanted to buy a Mr. Potato Head and nothing else, did they walk away happy?

“So let me get this right,” a reader writes after we noted yesterday how much of corporate America is “canceling” social media, if only for a while.

“‘Libertarian’ Robert Wenzel is incensed about companies exercising their free right to choose when and where to advertise? Hypocrite! If you're a shareholder and don't like it, exercise your free right to sell.

The 5: Strange times these are, right?

Facebook is exercising “censorship” by flagging certain posts or barring the people behind those posts altogether. Dozens of Fortune 500 companies believe Facebook isn’t doing enough and are “censoring” Facebook via an ad boycott.

Also, we’re getting a charge out of all these people who’ve glommed onto a site called Parler, as a so-called alternative to Twitter that’s supposed to be free of “censorship.” But Parler is banning users it doesn’t like too.

It’s as if the word is both losing all meaning and acquiring weird and disturbing new meaning, all at the same time.

Oy… Good luck with the second half of 2020. We’ll be here with you. They can’t censor email, unless they shut down the internet and wireless networks. Oh, wait…

P.S. Look, if the stock market is going to rally amid a new depression, civil unrest and the world generally going to hell in a handbag… might as well come along for the ride, right?

Our James Altucher has perfected a trading algorithm that gives his readers the opportunity to multiply their money three or four or more times over… by exploiting what he calls the “seven-day glitch.”

Yes, these trades can pay off in just seven days — as he explains when you watch this.