EVERYTHING Is Political Now

Coca-Cola is taking a social media break. So is Starbucks. And Verizon.

Indeed, a large swath of corporate America is doing what millions of individual Americans do from time to time… 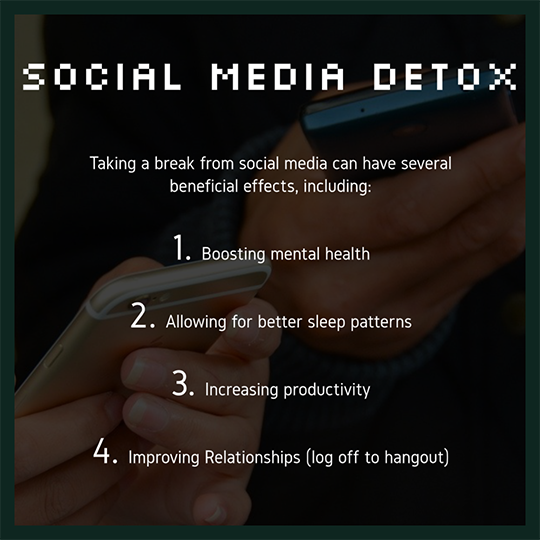 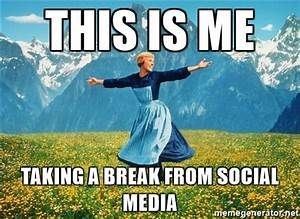 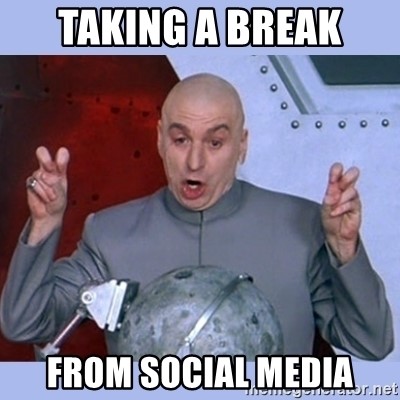 Except in the case of corporate America, sitting out social media is shot through with both economic and political implications — especially when the justification is social media’s supposed enabling of “hate speech” and “misinformation.”

Verizon was responding to a campaign called “Stop Hate for Profit” — sponsored by the NAACP and the Anti-Defamation League, among others.

Up to that point, the only brands that had declared a social media break were the ones you might consider the usual “crunchy” suspects — Ben & Jerry’s, along with trendy outdoors brands like North Face and REI. But Verizon? That’s a game changer.

The snowball gathered speed Friday when Unilever — the British-Dutch multinational whose brands include Dove, Hellmann’s and Lipton — announced it would cease all U.S. advertising on Facebook and Twitter for the rest of 2020.

After the market close on Friday, Coca-Cola piled on — declaring it would pause advertising on all social media platforms for 30 days. Yesterday, Starbucks declared its own social media break.

The impact on Facebook’s share price has been palpable.

Only last Tuesday, FB notched an all-time record close at $242. But after Unilever’s announcement Friday, the bottom fell out and FB shares tumbled 8% on the day. It’s down again today despite the broader stock market staging a strong rally.

Up until the advertiser boycotts began snowballing, it looked as if FB’s share price was set to explode higher — as our Greg Guenthner illustrates with a candlestick chart… 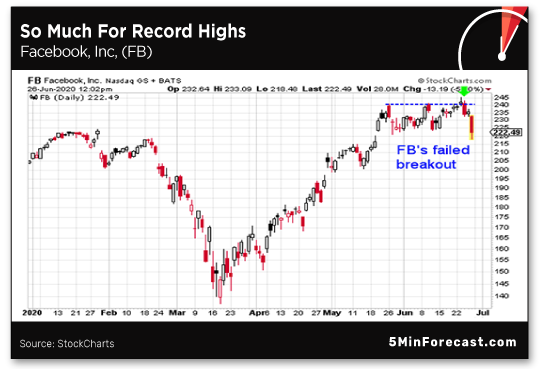 Now at $215 this morning, the share price is back to levels of mid-May. Or late February or early January, depending on how you look at that chart.

On the one hand, the mushrooming of the boycott seems ominous.

To be sure, this e-letter has been out front for two years — warning that the social media giants are buckling to government censorship demands as a way of fending off government regulation. Too often they act like hall monitors for adults.

And at a time when a huge cross-section of corporate America appears set to conduct a purge of employees who don’t toe the “white fragility” line… the boycott looks like one more step down a perilous path.

“Corporate America is either in line with the thinking of the Mao crowd or fears them,” complains the libertarian econ blogger Robert Wenzel.

On the other hand… For as long as brand advertising has existed, brand advertisers have been leery about hawking their wares in proximity to “controversial” content.

Some random old-media examples from the last three decades…

Then and now, Coca-Cola and its peers want to be all things to all people. That’s how you build and maintain a world-class brand to begin with.

Here’s what is different now: It might be more difficult — maybe impossible — to be all things to all people.

It comes back to 5 founder Addison Wiggin’s quip in this space three years ago: “The worst thing Donald Trump has done is he’s gotten people interested in politics again.”

Maybe it would have happened even without Trump… but here in 2020, everything is getting politicized. Amid a global pandemic, the decision to wear a face mask or not is becoming, God help us all, a political statement one makes every time one goes out in public.

That’s a tricky environment for a name-brand advertiser — and an uncharted one. Ditching Peggy Bundy in 1989 or Ellen DeGeneres in 1997 or Glenn Beck in 2009 were easy calls. No one was going to stop buying Coke or Crest as a consequence.

But now? Unilever laid out the dilemma in its statement on Friday, albeit with a somewhat PC spin: “We acknowledge the efforts of our partners [like Facebook], but there is much more to be done, especially in the areas of divisiveness and hate speech during this polarized election period in the U.S.”

*Sigh*… Still 128 days till Election Day. Not that that’s going to settle anything, either…

Wall Street is starting the week on the rally tracks… and for once it’s the Dow taking the lead among the major U.S. indexes.

For all the chatter about how the stock market’s mini-slump the last three weeks is linked to a “resurgence” of the corona-crud, we think an equally plausible explanation is this… 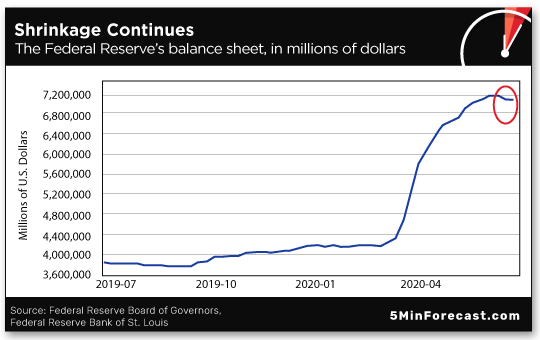 The S&P 500 peaked more or less at the same time as the Federal Reserve’s balance sheet — the week of June 8.

The latest total is still a hair over $7 trillion, but it’s clear that “QE infinity” is in fact not infinite. At least not until the stock market takes another serious tumble and the Fed cranks up the printing press again, right?

Meanwhile, we now know whose corporate bonds the Fed has been buying in recent weeks.

Yesterday, the Fed disclosed it has purchased $429 million in debt from 86 companies. None of them particularly raise an eyebrow. They’re all stalwarts of corporate America — AT&T, Walgreens, Microsoft, Pfizer, Marathon Petroleum.

The Fed also disclosed whose bonds it will buy in the months ahead — about 750 companies including Apple, Walmart and Exxon Mobil. Those purchases could total another $320 million or so.

The Fed is trying to be circumspect about not picking winners and losers. Or as Fortune explains it, “the Fed said two weeks ago that it would seek to mimic a broad market index approach and purchase bonds from a wide range of companies.”

But the fact the Fed is buying corporate bonds at all signals favoritism toward big existing players — indebted lumbering behemoths that can’t innovate. It’s not as if the Fed is going to take the largesse it creates from thin air and spread it around to a plucky but capital-starved startup, right?

At least the Fed isn’t buying the corporate bonds of the banks. No, the banks got their own special favors with the bogus “stress tests” the Fed conducted last week.

“As the term implies, these stress tests attempt to reveal how the banks would hold up under a hypothetical ‘severely adverse scenario,’” says our investment banking veteran Nomi Prins.

“Even more scary is that the Fed’s severely adverse scenario imagined a GDP decline of ‘8.5% from its pre-recession peak, reaching a trough in the third quarter of 2021.’”

Yeah, good luck with that. The latest second-quarter estimates from the Federal Reserve Bank of Atlanta point to a 39.5% annualized plunge. (We’ll get the official figures at the end of July.)

That’s how it’s gone with these stress tests ever since they were implemented after the Panic of 2008. They’re supposed to replicate a grueling treadmill workout, and instead it’s a leisurely stroll through the park…

Speaking of the banks, Goldman Sachs has just created its own typeface.

Under its unique license, this font is free for anyone to use — with a catch. You can’t use it to criticize Goldman Sachs.

Naturally, the interwebz have already used it to do just that — citing the famous description of the company penned a decade ago by Rolling Stone writer Matt Taibbi… 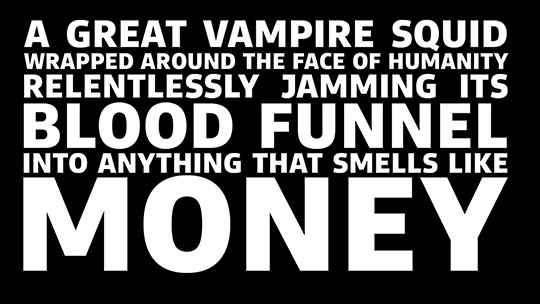 Exactly what the legal consequences are for violating the terms of the license, we don’t know.

As the Canadian tech journalist Clive Thompson says, “This is like a French Situationist prank or something.”

“On the money,” a reader writes after our take on how corporate America is willingly accommodating the woke crowd.

In particular, he was struck by our citation of Reason writer Robby Soave’s comments and comparisons. “The Mob will eat you and themselves alive,” the reader says. “Look at poor Robespierre.”

The 5: The niche industry of diversity and inclusion consultants have certainly seized the moment, no? Makes you wonder where it all ends. 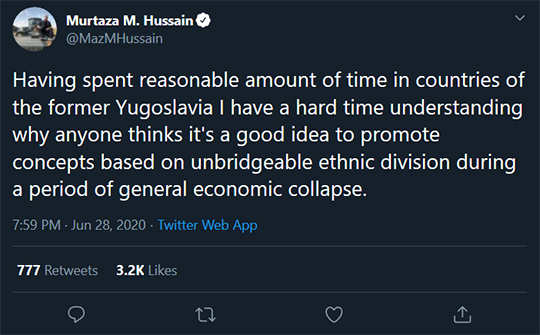 “Have a suggestion to fix two issues brought to light in The 5 recently,” reads our next mailbag entry.

“As far as the state budget deficits, have the Treasury Department give each state a list of the dead people in their state that received stimulus checks and let the states keep whatever they can ‘claw’ back. Would partially ‘fix’ the two problems and would probably be very entertaining.

And on the topic of fireworks crackdowns: “My favorite uncle's recurring comment to me was, ‘There's not a problem in the world that can't be solved… if you've got ENOUGH dynamite.’

“Thanks for your fun reads.”

P.S. As we go to virtual press, the hall monitors are at it again: Reddit just removed more than 2,000 forums — including the right-wing r/The_Donald and the left-wing r/ChapoTrapHouse.

As The Verge says, “It marks a major reversal for a company whose commitment to free expression has historically been so strong that it once allowed users to distribute stolen nude photos freely on the site.”