“The country’s been screwed for about 40 years now,” says Graham Summers — bestselling author of The Everything Bubble — during an interview with The 5’s founder Addison Wiggin.

“The economy [was] hollowed out… when a lot of the middle class ceased to exist,” he says. “The country’s been facing some very deep structural problems with our economy for multiple decades,” Graham continues, “and it’s now coming to a head.”

Add to the mix a mysterious virus that’s effectively shut down the largest economy in the world and, unsurprisingly, the result is social upheaval — “with civil unrest, riots and just total disarray and chaos in some major [U.S.] cities,” says Graham.

To say nothing of godawful policing in communities across the country, costing the lives of U.S. citizens…

“There’s a lot of frustration in our country,” Graham says, “because we’re seeing a severe breakdown in the social contract.”

Transporting you back to Philosophy 101 for a moment, the idea of the social contract has been pored over by scholars like Thomas Hobbes, Jean-Jacques Rousseau and — perhaps most relevant to the American experience — John Locke.

The social contract is similar to that 1930s-era song written by Billy Hill: “You’ve got to give a little [individual freedoms], take a little [state protections]” which might very well “make your poor heart break a little.” But — hey — that’s the story of… civilization.

The breakdown comes when individual freedoms and state protection get out of balance; for example, “[when] people are allowed to riot and destroy property,” Graham says, “and the police are told to stand down.”

In that instance, “What’s the point of paying taxes?” Graham asks. “I mean, [one] basis of society is that you pay taxes in exchange for… the most fundamental rule of law. What’s that about?”

Not a rhetorical question…

According to Graham: The U.S. is fixed in this “binary kind of framework where there’s this group, and then there’s that group… and they’re against one another.” 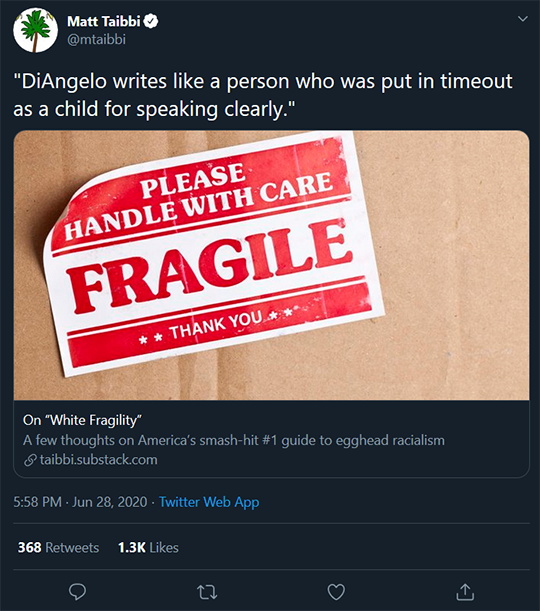 She “banishes ambiguity, nuance and feeling and structures… around sterile word pairs, like racist and antiracist, platform and deplatform, center and silence.” Black and white… Republican and Democrat… the list goes on and on.

Graham concludes: “What that really does is turn people against each other.” Not to mention, everything gets scrutinized under the microscope of political correctness.

It’s all smoke and mirrors… and a time-consuming distraction from reality.

“The larger picture… is seeing things from a geopolitical perspective,” Graham says. Simply put, he believes: “You wouldn’t have this [level] of civil unrest if the economy was doing well across the board.”

Back to Graham’s screwed-for-decades premise, he says: “When corporations started outsourcing their production, their industrial capacity to Asia and other places, they weren’t doing that with a specific race or a specific demographic in mind.”

But that’s not to say working-class folks living in U.S. cities didn’t bear the brunt of corporate decision makers…

“[Corporations] were… trying to maximize profits and doing that by making their operating costs dramatically lower by paying people in other countries much less than they’d have to pay someone in this country.”

All to say, the national “screwing” — that hollowed out the middle class — has “consisted of multiple policies, the simplest being outsourcing [and] removing our productive capacity,” says Graham. “I mean, this is all staring us in the face.”

“The federal response seems to be because we have the reserve currency of the world,” says Graham, we can simply print our way out of social and economic collapse.

The thing is: “Debt doesn’t really matter… until it does,” says Graham. “That’s the basis of Modern Monetary Theory (MMT). And the whole world’s been doing this stuff now since the early ’70s.

“What’s really going on is we’re on the tail end of the largest monetary experiment in history,” Graham says, “without gold backing any major fiat currency, the bedrock of the financial system.

“And at some point,” Graham concludes, “we will reach a level that’s unsustainable and there’s actually a crisis.”

So how to crisis-proof personal wealth? Wait for it… Graham says: “I would have some exposure to precious metals.

“That would be a long-term trend based on… the only really clear thing we know from policymakers is that they’re going to address all of these issues by printing more money.”

Graham continues: “It is important to note that EVERY major government/central bank is currently doing the same thing: printing and spending trillions of their currencies.

“As a result, gold is breaking out against every major world currency: the USD, the yen, the euro and the franc.”

Graham takeaway: “I argue that the clearest, largest opportunity in the markets today is NOT in stocks — but in precious metals. Whereas stocks are [volatile], precious metals are in CLEAR uptrends.”

[Ed. note: If you’ve been a 5 reader for any length of time, you know how partial we are to Hard Assets Alliance for your precious metals needs. Learn what they can do for you right here.

In the interest of transparency: Our firm owns a piece of Hard Assets Alliance, so you should assume we’ll collect a small cut once you fund your account. But we wouldn’t have invested in Hard Assets Alliance unless we were already impressed by what they do for people just like you.]

Seems appropriate to start our market notes today with gold: The yellow metal’s down — but not out — to $1,778.60 per ounce. Per the other commodity we follow regularly, crude’s up 1% to a shade under $40 for a barrel of West Texas Intermediate.

The big economic number today is a good one — good being a relative term lately.

The ISM manufacturing index for June rings in at 52.6. Anything above 50 indicates growth, and today’s number is the highest in more than a year — so that’s good, right? Yes, but that growth comes off of extremely depressed levels in April and May. A good number today barely begins to make up for that contraction.

Worse, the “internals” of the survey show employment stuck at 42.1 (jobs, who needs ‘em?) and new orders for export at 47.6 (phooey on foreign customers, right?).

But for the moment, there’s renewed chatter of the elusive “V-shaped recovery” — at least until the June job numbers tomorrow…

In what’s shaping up to be a gold-heavy issue, we read this at South China Morning Post: “Kingold Jewelry, a Nasdaq-listed jeweler… has been accused of large-scale fraud”…

In a plot line worthy of a Hollywood heist: “Kingold [Nasdaq: KGJI], one of China’s largest gold jewelry manufacturers, allegedly used 83 tonnes of gold bars as loan collateral, which later turned out to be gilded copper. (Emphasis ours.)

“The Wuhan-based company is alleged to have used fake gold bars as collateral to fraudulently obtain 20 billion yuan (US$2.8 billion) in loans… over the past five years from at least 14 Chinese financial institutions,” SCMP says. “The fake gold was exposed in February when Dongguan Trust set out to liquidate Kingold’s collateral to cover defaulted debts.”

The Kingold affair is “the second major scandal in three months involving a Chinese company listed in the U.S.… fueling a recent drive by American politicians to expel Chinese companies from Wall Street.”

The other imbroglio involved TAL Education Group [NYSE: TAL] — a holding company for after-school education centers — that “said it may have inflated the sales of one of its business segments worth hundreds of millions of dollars.”

Which gets us up to speed… to the point when “the United States Senate recently passed an unprecedented bill to fence off Wall Street from Chinese companies,” says the SCMP.

“The bill requires fundraising applicants to prove they are not owned or controlled by foreign governments before they can list on a U.S. [exchange], and to submit audits to the U.S. Public Company Accounting Oversight Board (PCAOB).”

As for the Nasdaq, the exchange is considering raising the bar for IPO applicants — with “minimum fundraising… increased to US$25 million, or at least a quarter of the company’s value.”

“Remember when the Sioux were on the warpath to stop the Dakota Access Pipeline?” a reader says apropos of Tuesday’s episode, Beating Buffett (at His Own Game).

“Well, getting oil out of the Bakken Shale was a big problem — not enough pipeline capacity to get out all the oil that was produced, but rail tank cars filled the void.

“Every day that the pipeline was delayed meant millions for the railroads.

“Who funded the Indians to protest? Where is Union Pacific headquartered? Same place as the ‘Oracle of Omaha’… Hmmm.”

The 5: Our perspicacious reader is not the first to wonder…

Geologist and mining expert Byron King made the connection in 2015 when he noted: “Of course, large amounts of Canadian oil still move into the U.S. via railway tanker cars.

Did a reader solve the Mr. Potato Head mystery?

A curious thing was happening at Canadian Tire checkout lines: All scanned items were coming up “Mr. Potato Head.” So a reader writes…

“Global News writes, ‘Trudeau, well-known around the world for his use of social media, has been given the nickname “xiao tudou,” or “little potato,” as the name Trudeau sounds similar to the Mandarin word for potato.’

“Sounds like a hack to me at Canadian Tire! Happy Canada Day!”

Indeed… A shout-out to all our Canadian readers! Kick back with a Molson… or Labatt.

P.S. The easiest way to purchase and store gold and other precious metals is through the Hard Assets Alliance. Yes, Agora Financial owns a stake in the company and takes a cut of any fees, but we wouldn’t have bought in if we weren’t completely sold on HAA’s credibility. Click here to open your account today.