“How low is low?” says an article on Bloomberg Friday. (And we’ll let that question dangle because it could refer to almost anything in the coronaverse.)

The D.C. swamp-scape? Sure. Lamebrain mediaites? Uh-huh. Mr. Burnsian titans of industry? Yep. All issues, however, for another day…

Instead, the article says: “In a world divided between digital haves and have-nots, billionaires Elon Musk and Jeff Bezos are trying to close the gap. The two entrepreneurs separately aim to launch thousands of small satellites to zip around the globe in what’s known as low-Earth orbit, or LEO.”

So how low? While conventional communication satellites orbit about 22,370 miles above our tiny blue speck, “LEO satellites operate from 500 kilometers (311 miles) to 2,000 kilometers above the Earth’s surface.” 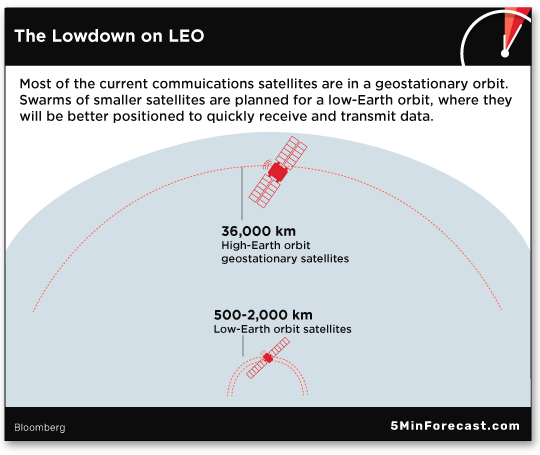 The benefits: “A shorter trip is a faster trip,” Bloomberg notes, “so the time needed for data to be sent and returned — what’s known as latency — is lower for LEO satellites than for those farther out.”

And high-speed, reduced-latency Wi-Fi is something our technology ace Ray Blanco’s been following for years…

“Some deep-pocketed companies have decided to skip building out nationwide infrastructure,” Ray notes. Rather — like Musk and Bezos — they’re going the LEO-satellite route.

Musk’s SpaceX “plans to have 1,584 internet-beaming satellites in orbit by 2022,” Ray says. And “400 of these [satellites] are already up, with more batches set to launch soon.”

“And Amazon CEO Jeff Bezos plans to build his own network of satellites to power an internet service he’s calling Kuiper.”

Ray continues: “I’m seeing strong signs that another giant corporation is about to throw its hat into the ring.” Hmm… flipping through the Rolodex of FANG… FAANG… MAGA companies…

Apple, of course, has a legendary tech history…

“In each of those cases,” Ray says, “Apple wasn’t the first into a market. Yet it ended up dominating the competition anyway.

“Apple is known for its secrecy, but some details have leaked out,” he says. “In December 2019, Bloomberg reported that Apple has a five-year goal to make your iPhone work anywhere in the world via satellite communications.”

Again per Bloomberg, the project “is a top priority” for Apple CEO Tim Cook. “In other words,” Ray notes, “Cook wants to offer… customers wireless internet from space. Apple-Fi.

“Apple’s in the consumer electronics business — not telecommunications business or infrastructure,” says Ray. “So I find it very unlikely that Apple will spend billions and billions of dollars putting up its own constellation of satellites.

“It will be far more cost-effective to have someone else put the satellite hardware together and shoot them into space… then run the actual network once they’re up there,” Ray contends.

“I’ve sifted through all of the major and minor players to see who would benefit most from an Apple team-up,” says Ray. “[Apple] will choose the most promising company in the industry to manage and maintain its satellites…

“That’s why EchoStar Corp. (NASDAQ: SATS) is at the top of my list of potential Apple-Fi winners,” says Ray.

“EchoStar has been in the satellite game in one form or another since 1980,” says Ray. “At first, it focused on the terrestrial side of the business — selling the equipment people needed to receive satellite broadcasts.

“In 1995, it launched its first satellite… and a year later, it created the DISH Network, broadcasting premium television shows and movies directly into people’s homes.” 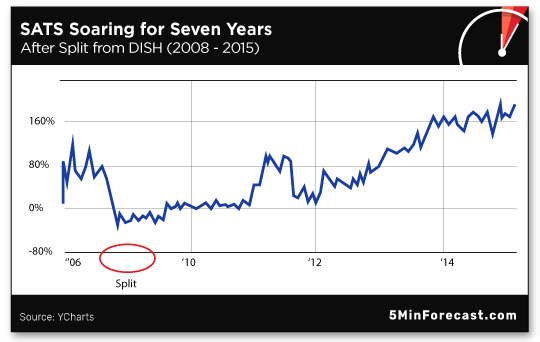 “We plan to leverage our innovations in technologies and services to pursue strategic opportunities for long-term growth — whether organically, by acquisition or through strategic partner alliances.”

Ray continues: “To be perfectly clear, there’s no guarantee that Apple would choose to partner with EchoStar. I can’t even say with 100% certainty that Apple is planning its own satellite internet network.

“All I’m doing is piecing together some tantalizing clues.

“We know Apple has been slow-walking toward 5G,” Ray says. What’s more, Apple’s clearly making LEO-satellite communication a “top priority,” even poaching Google personnel and registering a patent to make it happen.

“You don’t have to be a world-class tech analyst to realize that it must all be leading to something,” says Ray.

As for Apple’s partner, “maybe it will be EchoStar. Or another satellite service provider.” But once Apple makes a formal announcement, shares will skyrocket.

Ray’s conclusion? “There are so many different ways for you to profit from this innovation…

All you have to do is keep an eye on Apple.

“One thing is sure,” Ray says, “any company that helps get Apple-Fi off the ground (literally) will enjoy a tidal wave of new revenue… These partners will see their stock shares soar.”

Our analyst Greg Guenthner notes a head-spinning reversal yesterday: “The Nasdaq jumped to new all-time highs Monday morning, only to completely fall apart and close more than 2% in the red.” The index continues in the red — down 20 points to 10,370 today.

In a variation on a theme Dave reported yesterday, Greg says: “We’ve talked a lot recently about how many of the tech momentum names were overextended. Yesterday’s action shows why we shouldn’t chase stocks that have gone parabolic! When they correct, it happens FAST.”

And to sum up the official start of earnings season, Greg quips: “JPM beat, while Wells Fargo whiffed.”

One noteworthy economic number today: The wonks at the Labor Department report the Consumer Price Index rose 0.6% in June after three consecutive downturn months — marking the biggest monthly gain since August 2012. Course, it’ll be interesting to see July’s number after so many states — including Cali and Texas — re-close businesses.

According to the Silver Institute: “Silver’s role as a valued investment was broadly on display during the first half of 2020… Paving the way was remarkably strong growth in silver-backed exchange-traded products (ETPs), which have posted successive all-time highs this year, together with solid silver coin and bar investment.”

The average price of silver dropped sharply in mid-March but recovered to $17.84 by the end of June. Silver’s since broken through the $18 barrier. Today? Silver’s at $19.55 per ounce.

“The gold-silver ratio — the quantity of silver ounces needed to buy an ounce of gold — fell since its multidecade high of 127 in March,” the Silver Institute says, “and at end-June stood at 97.8, which is still very high by historical standards, and may signal that silver is undervalued relative to gold.”

There’s still time to capture silver’s buildup in 2020, but time’s running short. Follow this link to learn how you can buy and store silver — and other precious metals — with Hard Assets Alliance. [Full disclosure: We bought a piece of the firm in 2019 and will collect a small cut… but we’re sold on how HAA serves investors like you.]

And small-business owners are trying their darndest to look on the bright side. The index jumped 6.2 points in June to 100.6, a little more in line with pre-corona catastrophe levels. 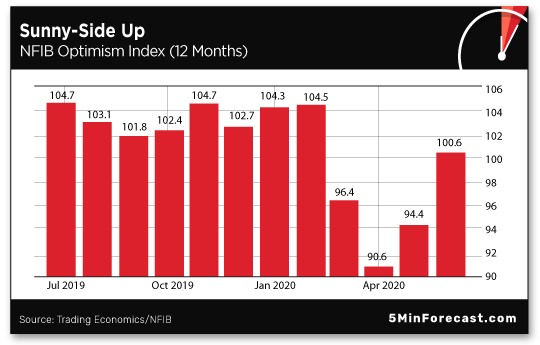 The NFIB’s chief economist William Dunkelberg says: "Optimism about future conditions improved and small-business owners indicate they expect the recession to be short-lived.

“We're starting to see positive signs of increased consumer spending, but there is still much work to be done to get back to pre-crisis levels.”

Umm… we’ll go out on a limb and say the survey was taken before renewed shutdowns.

The revised tax deadline is *gulp* tomorrow, July 15… and former hedge fund manager Zach Scheidt offers some timely advice. “When it comes to managing your wealth,” he says, “I'm all for minimizing your tax liability.” Here, here!

To that end, Zach says: “Consider placing your short-term trades in a retirement account that’s tax-free (or tax-deferred). And conversely, consider holding your long-term investment positions in a taxable brokerage account.

“That way the short-term profits you generate from more speculative trades won't be taxed right away. [They're protected by the IRA or 401(k) structure of your retirement account.]

“Meanwhile,” Zach says, “your investment positions can continue to grow and won't be taxed until you actually sell your positions. This allows your wealth to grow more quickly with compound interest instead of paying the government right away.”

Another pro tip? “If you're considering a tax-deductible donation,” Zach says, “your gift may go a lot further if you donate shares of stock instead of cash — especially if you have a large gain in one of your positions!

“When you donate shares of stock, you're not required to pay capital gains tax from your shares. And you still get the tax write-off from the value of your donation.

“The charity that you give to can simply sell the shares without paying taxes (as long as they're structured as a charitable organization),” Zach says. “So your gift goes a lot further than if you had sold the same shares, paid the taxes and then given the remaining proceeds to a charity.”

[Aside: In a former life, your editor today worked for a university’s endowment, coordinating the transfer of stock gifts — a university, coincidentally, whose corona-counter we’re all glued to. And yes, donating shares of stock is definitely the preferred method of the rich and famous.]

Last, “if you sell some shares of a losing position during [a] tax period, you can reduce your capital gains by the amount of the loss you're taking,” Zach says.

“This can allow you to keep more of your profit and get you out of a losing position,” he notes. “You can then take the cash from your losing position and find a better place to invest — preferably one that’s already trending higher.”

So while Zach isn’t a tax professional, “these tips… are a good rule of thumb to help you keep more of your hard-earned wealth and focus more of your resources on the things that really matter!”

Update on the Japanese “drinking helmet”: We’ve found an image of the top-secret prototype… 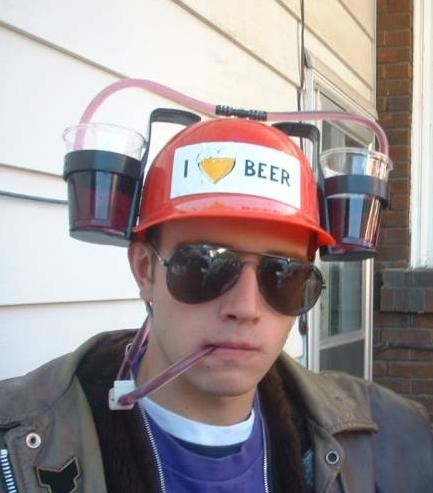 They’re still working out the kinks…

P.S. Our colleague Ray Blanco was one of the very first people to recommend 5G stocks back in 2011, long before other tech analysts. (Anyone who listened to Ray then had the chance to make a fortune.)

Now Ray believes Apple’s latest project might be more revolutionary than the iPhone, and investors who act now could have a real shot at life-changing profits from this coming $260 billion revolution.

And the next advance in this tech revolution might happen as soon as July 28… Learn all the particulars right here.