Beyond Gold: Your Weak-Dollar Playbook

Friday was a fake-out: Today is the day that’s finally serving up a buy-the-dip opportunity in precious metals. 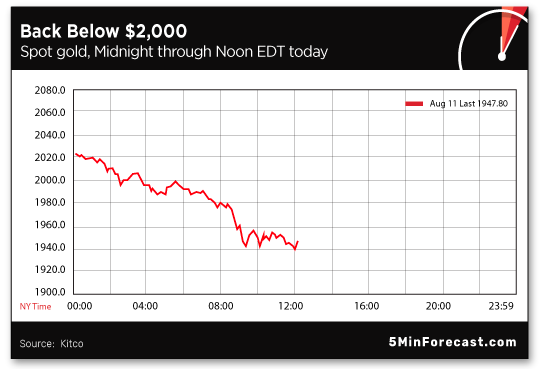 There was a bit of selling overnight in Hong Kong. But the decisive break below $2,000 came during trade in London, as dawn broke on the U.S. East Coast.

It was around that same time news broke that Russia registered the world’s first COVID-19 vaccine and President Vladimir Putin’s daughter already got the shot.

That’s not to say the vaccine news is the cause of the sell-off. But it might have been a good excuse for some profit-taking. If it wasn’t the vaccine today, there’d have been another excuse tomorrow or the day after.

Intriguingly, gold’s loss has not translated to the dollar’s gain.

At least not when we’re talking about the U.S. dollar index. At 93.5, it’s down a bit on the day. The dollar index has spent the last two weeks testing lows last seen more than two years ago… 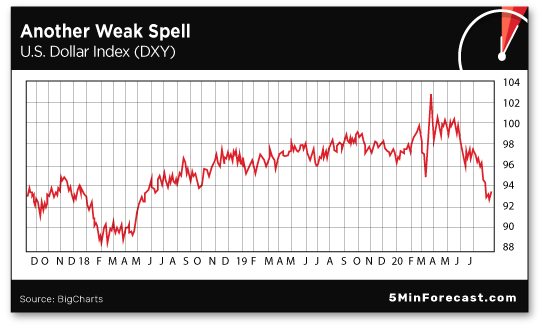 From where we sit, the dollar index is a profoundly flawed beast. It measures the greenback against only six other currencies, all in the developed world — and the euro gets 57% of the weighting.

But when finance types talk about “the dollar” being “strong” or “weak,” this is the measure they’re usually talking about, so we can’t ignore it altogether.

A weakening dollar “can wreak havoc on your retirement plans,” says our income specialist Zach Scheidt. “As the dollar loses value, it will take you more cash to pay for day-to-day expenses.”

That said, “a few companies are actually benefiting from the weakening U.S. dollar,” Zach goes on.

“And if you invest in these companies today, your profits can help offset the negative effects of a falling dollar, protecting your retirement savings!”

That should be no surprise if you’ve been reading us for a while. All else being equal, giant U.S.-based multinationals benefit from a weaker dollar.

As Zach explained it here during the last weak-dollar spell in 2018, “Blue chip companies based in the U.S. with sales all around the world have an advantage right now.”

“That’s because the weak U.S. dollar makes it easier for companies to sell their products overseas for cheaper prices. You see, a weak U.S. dollar naturally corresponds to stronger other currencies. And if international currencies are stronger, it means consumers overseas can more easily afford the products sold by U.S. companies.

“It also helps that when corporations generate profits in euros, yen or British pounds, those profits get reported to investors in dollar terms. And again, profits generated in euros naturally translate to more ‘weak’ U.S. dollars.

“So a weak U.S. dollar provides a tailwind for big international companies based in the U.S.”

How to play it? Zach and his team have three suggestions they shared yesterday in our sister publication, the Rich Retirement Letter…

Of course, all three are blue chip stalwarts. PG is the ultimate “defensive” play during an economic downturn and we made the case in January that MSFT (along with Apple) has joined the likes of PG and Clorox as makers of stuff people buy no matter the state of the economy.

But all three of these names stand to get an extra boost during a weak-dollar phase like now.

Make it three days in a row that the stodgy blue chips are up and the highflying tech sector is down.

But the Nasdaq is down a quarter percent, slipping further away from the lofty 11,000 mark it reached last week.

The longer this trend goes on, the more it’s evident that the “rotation” out of tech and into more traditional names is for real.

“Rotation occurs when capital begins to move en masse from one sector to another,” analyst Graham Summers reminds us. “Typically, this involves money shifting from a sector that has been leading to one that has been lagging.”

It’s not just the Dow’s outperformance in recent days that’s caught his attention. “Last week, microcaps (in blue) outperformed tech stocks (in orange) by a significant margin. This has not been the case for most of the rally from the March lows. 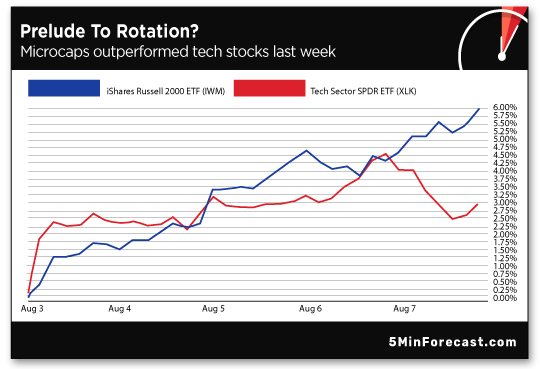 “Astonishingly, even financials – one of the worst performing sectors since the March lows – outperformed tech last week.

“One of the best opportunities for trading is when laggards play ‘catch up.’ And with tech stocks dramatically overbought, we might have the makings of some great gains here.”

We’ll stay on top of it…

The National Federation of Independent Business is out with its monthly optimism index. The June number was so giddy we anticipated a drop in July with resumed lockdowns in many places. 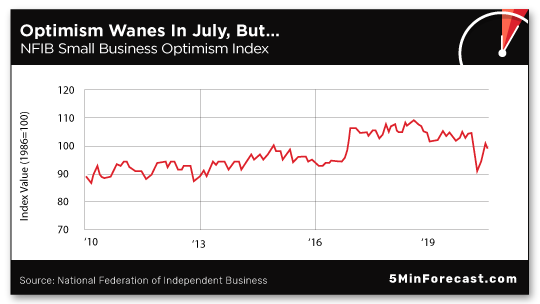 Asked about their single most important problem, “quality of labor” is back on top for the first time since the pandemic hit, cited by 21% of survey respondents. For businesses looking to hire, good help is hard to find.

Taxes were cited by 18% and regulations by 14%. “Poor sales,” the leading category at the peak of the lockdowns, is now cited by 13%.

Usually NFIB chief economist Bill Dunkelberg generates a quote for the media that lends some sort of insight into the data. All he can do this month is belabor the obvious: “This summer has been challenging for many small-business owners who are working hard to keep their doors open and remain in business.” Word.

We realize airlines are desperate to get butts in seats again these days, but really now… 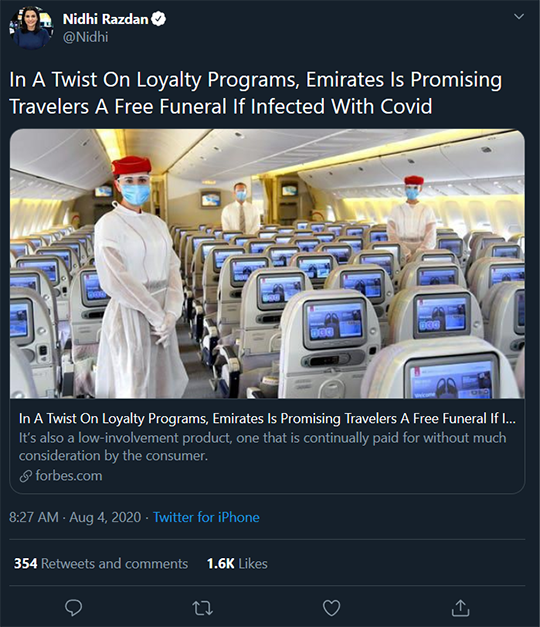 Yep. The Dubai-based Emirates airline was already promising to cover passengers’ medical expenses and quarantine costs if they’re diagnosed with the corona-crud during their travels… but now it’s upping the ante.

Should you be diagnosed with the virus and then perish after taking an Emirates flight, you’re entitled to 1,500 euros for burial, or roughly $1,765 — with coverage provided through NEXtCARE, a division of the insurance giant Allianz.

All travel between now and Oct. 31 is eligible. The offer is valid for 31 days from "the moment you take your first flight, and it covers you even if you travel onward to another city," says the airline.

Give ‘em points for a unique selling proposition. But is anyone really going to think to oneself, Gosh, I’m on the fence about flying to this destination, but if they’re gonna cover funeral expenses, that cinches it — I’m booking now!

To the mailbag: “Speaking of Ben Meng, CalPERS and unfunded pension shenanigans, have you heard about the California legislature’s latest tax proposal?

“It would increase the state income tax rate on highest earners from 13.3% to 16.8% (a previous tax increase was also passed in 2014). And would be retroactively applied to Jan. 1, 2020. The Bay Area already lost three Fortune 500 companies last year and 2019 population growth in California was negative as more people leave the state.

“Meanwhile ‘public employees’ like the chief of police in San Francisco make $300K/year with a guaranteed pension while the rest of us plebes fight for scraps in the stock market with our 401(k)s (if you’re ‘lucky’ enough to be employed).

“You guys have been warning about this for years. It seems the day of unfunded pension reckoning is upon us…”

Next, a reader reacts to our item about Los Angeles cutting off utility service to homes hosting large parties in violation of lockdown orders.

“Come on, LA! You need an old man like me to tell you how to party?

“If you chance getting your electricity and water cut off, do what we did as kids. Get the keg in the trunk and head to the hills.

“With that great weather down there (beats the heck out of the rain in Seattle), invites via social networks and turning up the tunes with those car sound systems nowadays that rattle my house windows from the main road, there you go. Party without worry of not being able to take a shower the next day.

“I agree with the commentary about the election,” a reader writes as we get a little more reaction dribbling from last Thursday’s 5. “That analysis of the war games was one of the most insightful pieces I’ve read from this newsletter.

“I too have been expecting upheaval, and that pretty much aligned with most of the scenarios I’ve considered, only a couple of them turned out worse in the analysis from your email.

“Thanks for sharing it. You can’t ignore politics when analyzing economics, because the companies run the government anyway. Literally everything the feds do is influenced.”

“Regarding the dearth of feedback on The 5's Thursday piece on the presidential election scenarios,” writes our final correspondent, “I thought the information you provided was interesting and thought-provoking and left me with nothing to add.

“Since I had nothing that I considered worthy of your other readers' time to comment, I did not. I assume other readers felt the same.

“So well done. Keep up the good work.”

The 5: “Drawing on my fine command of the English language, I said nothing,” is the line attributed to Robert Benchley.

But you clearly are not in the spirit of the times, sir.

Whether it’s the boomer president opining on whether there should be college football this fall… or “woke” millennials denouncing the private life of a congressional candidate in Massachusetts… this is the age where everyone is entitled to everyone else’s opinion. Get with the program!

This morning Alan urged readers to take 50% gains on a financial-sector ETF… and 50% on Walgreen’s. And if they followed his instructions to the letter, they sold only half their positions and they’re holding out for the reset of it to deliver a clean double.

Checking Alan’s tote board, that’s 79 winners out of 89 closed trades going back to May. And with a new trade every trading day, your next opportunity could come as soon as tomorrow.

Please note: There’s a strict limit on the number of new members we can accept into this service each day. Click here to see if slots are still available.