We’re starting to think differently about Tesla these days… and it has nothing to do with its announcement after the closing bell yesterday to execute a 5-for-1 stock split.

But for the record, TSLA is up 8.2% this morning in reaction to the news. We haven’t run all the numbers, but founder Elon Musk might now be the fifth-richest person in the world.

The vocal community of finance pros who think Tesla is a bubble at best and a fraud at worst are watching their short bets go ever more sour. But their conviction is unshaken — to wit, the hedge fund manager Mark Spiegel… 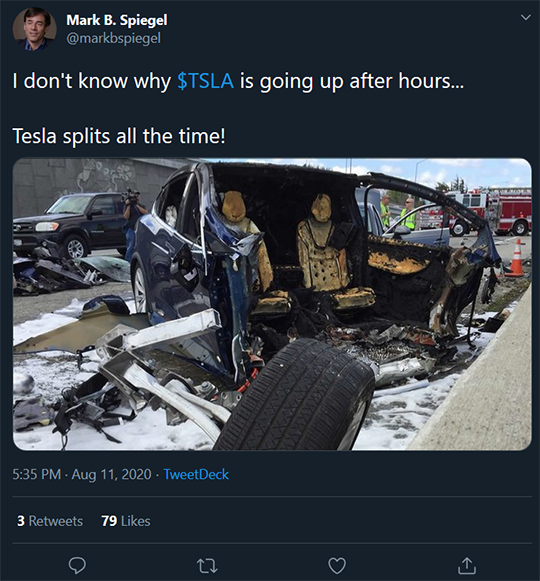 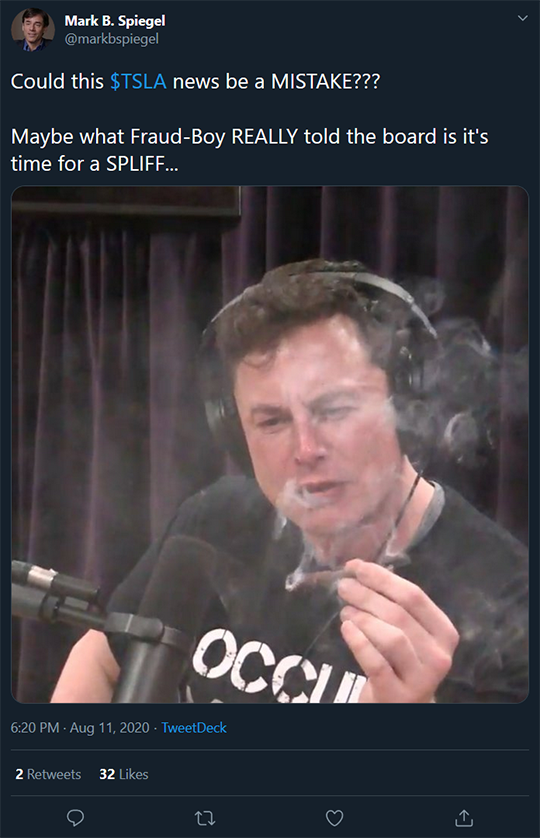 Here at our firm, we’ve been of many minds about TSLA over the years.

It went public in 2010, and about six months later it was recommended in our now-defunct Penny Stock Fortunes newsletter. Readers were skeptical; they knew all about Tesla’s generous government subsidies, including the tax breaks for buyers of electric cars — and how long would that last? “Never got so many letters telling us how dumb we were,” recalls colleague Jonas Elmerraji.

In more recent years, as TSLA shares soared ever higher, we became more sympathetic with the #TSLAQ community on Twitter. (“Q” at the end of a ticker symbol denotes the company is bankrupt.)

Folks like Spiegel look upon Musk as a carnival barker. They’re keen to tell us that while Musk portrays TSLA as a cutting-edge tech leader, the company ultimately is in the business of making automobiles — which unlike your typical tech venture is insanely capital-intensive.

But what if mass production of electric cars — on a scale with Toyota’s and GM’s production of gasoline-powered vehicles — isn’t really Musk’s endgame?

That’s the intriguing question we’ll take up today. But first, a few more words about the stock split and the price jump.

At the risk of belaboring the obvious, The Wall Street Journal points out “The split wouldn’t change Tesla’s market value… Essentially, an investor who owned 1,000 Tesla shares before the split would own 5,000 shares after it, with the share price divided by five.”

Apple announced its own split a couple of weeks ago. “When a company trades higher following the announcement of a stock split,” explains our Zach Scheidt, “the advance is more about perception than any specific metrics for the shares.”

For investors, “a lower split-adjusted stock price can make it seem like the stock is more affordable.”

No, it makes no logical sense — especially now that brokerages let you buy and sell fractional shares of high-priced stocks — but all else being equal, Zach says, “individual investors generally like to own lower-priced stocks.” 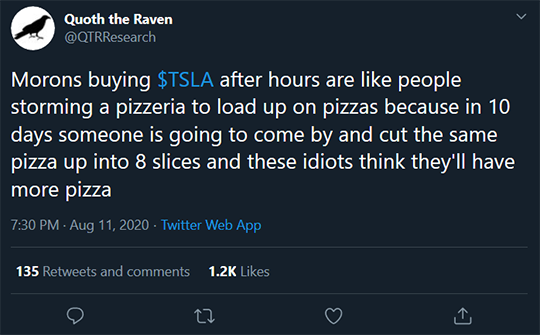 Meanwhile, “I realize that I’m standing virtually alone on this one: Tesla isn’t the company you think it is,” says colleague Robert Williams.

After a successful career as a Wall Street analyst, Bob got into the financial publishing biz. It was his research team that led readers to 1,040% gains on the biotech standout Illumina… 924% gains on Chemed Corp.… and 1,100% on Incyte. We’ve known him for more than four years now and we think the world of his work.

“It’s a mistake to rigidly categorize Tesla as a manufacturer of electric vehicles,” he tells us. “In fact, Tesla is as much of an EV manufacturer as Amazon is a bookseller.

“See, manufacturing EVs is only a means to an end for Tesla.

“The much larger prize is ownership of America’s autonomous vehicles platform,” Bob says.

“Every move that Tesla makes has a singular purpose — to rule the (driverless) American roadways by the end of the 2020s. I’m using the word ‘rule’ in its literal sense, too, as in… Tesla seeks to exercise ultimate power and authority over an area and its people.“

Speaking of Amazon, that’s the template Musk is using — whether he realizes it or not.

“Amazon was never truly about books,” Bob explains. “Books just happened to be the perfect product in which to open a digital storefront… build a proprietary platform that emphasizes ratings and reviews… establish national shipping routes and delivery strategies… develop a network of third-party vendors… master the art of warehousing… enhance clicks and commerce… expand into products beyond books… and then ultimately take over the entire retail sector.

“Instead of books, Tesla is manufacturing cars that never need a filling station. Tesla is also investing heavily in artificial intelligence (AI), having bought DeepScale — an innovative computer vision firm — last October for $100–200 million. Musk is even willing to license Tesla’s Autopilot driverless system to other car manufacturers.

“So please, don’t be fooled. Tesla is only masquerading as an EV manufacturer. Its true purpose for existing as a company is simple… to preside over America’s autonomous vehicles platform in 10 years.”

Yes, Tesla is one of the long-term holds in Bob’s entry-level newsletter, Future Wealth — launched in April, pandemics and lockdowns be damned. Only this morning, he urged his readers to take 205% profits on the health-technology name Livongo Health.

Clearly Bob’s onto something with his strategy — which you can learn much more about when you click here.

By bedtime on the East Coast last night, gold was back below $1,900 an ounce. The 24-hour decline from $2,020 was a lot steeper than this chart makes it look! 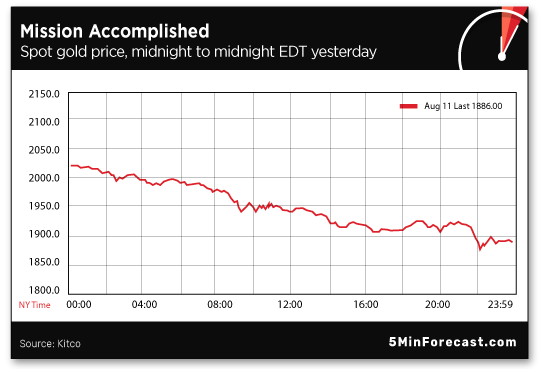 As much as the parabolic move past $2,000 looked like a short squeeze, the move yesterday looked like a bear raid —- the shorts forcing the price down to cover their positions.

Expect more where this came from, and consider it a gift every time it happens; checking our screens right now, the spot price has already recovered to $1,943.

The major U.S. stock indexes are recovering yesterday’s late-day losses and then some.

Usually, Establishment financial media are quick to cite a “reason” for one or another market move. Usually, those reasons are bogus, but that doesn’t stop them. But by and large, there’s radio silence about both yesterday’s sell-off and today’s recovery.

Perhaps, we’ll venture, the sell-off was a knee-jerk reaction to Joe Biden choosing a running mate… and the recovery is the day-after realization that Sen. Kamala Harris is friendly to Wall Street.

“After all was said and done the Democratic Party donor and professional class got pretty much exactly what it wanted,” tweets our favorite political reporter Michael Tracey.

The Intercept’s Lee Fang points out Harris comes from “the mod wing of the SF Democratic Party, a clique that relies on the same pool of big donors from tech/real estate/finance” who previously gave us California Gov. Gavin Newsom… and, earlier, House Speaker Nancy Pelosi.

So expect higher taxes for higher earners — we addressed possible changes to the tax code last week — but only token moves in the direction of “free” health care, higher education and so on. (UnitedHealth is up nearly 2% on the day. Just sayin’.)

There’s a whiff of inflation in the air: Inflation as measured by the consumer price index jumped 0.6% in July — way more than expected.

Year over year, the official inflation rate remains moribund at 1.0%, but it’s up from only 0.1% two months earlier. The real-world inflation rate from Shadow Government Statistics is also on the move, now 8.6% after bottoming in May.

At least food prices are easing a bit, down 0.4%, the pandemic panic buying over for now. Beef prices are down 8.2% in a month.

“A few months ago there was comment here about the extra trillion-plus dollars held by the U.S. Treasury and what it might be used for. It looks like we now have the answer,” writes a member of our Financial Reserve.

“Congress holds the purse strings, meaning it has to appropriate funding, but money in the Treasury can be spent at the discretion of the executive branch, at least as I understand it. Trump now has the funding available to back up his executive orders.

“If the Dems are able to get it blocked in the courts, then it looks to me like the advantage goes to Trump in the days between now and Election Day: ‘We tried to send you money when you needed it most, but the Dems blocked it, and they refused to approve helping you right now without adding a huge bill for things that have nothing to do with COVID relief and which ought to be debated on their own merits.’

“Clearly, there are a lot of people who are already firmly in one camp or the other, but to the 20–30% in the middle, this looks to me like it could tilt the scales to the red side of the voting platform.

“I'm not convinced that Trump is all that smart, but there's no doubt he's cunning, and in a politician that may be more potent.”

The 5: You’re correct that the swelling of the “Treasury General Account” — Uncle Sam’s cash hoard at the Fed — gives the president $1.7 trillion in leeway he wouldn’t have otherwise.

Not because the Constitution is the be-all, end-all… but because if we’re about to witness a decisive break with the “rule of law” as we’ve known it, well, that has implications for commerce and finance, no matter who holds the Oval Office going forward.

At this time, though, hard to say…

“So Putin won the race for the COVID-19 vaccine?” a reader writes.

“My first question is why didn’t he get pricked? Next question, is there video of this? If so, how do we know it is not a placebo? Placebos work extremely well in studies, in case you are not aware of that.

“I probably don’t have to tell you but I will: I think this is total BS.”

The 5: Could be. It takes up enough of our energy tracking the lies of the U.S. government, we’ve got nothing left when it comes to the foreign ones…

P.S. At this time, four companies have a market cap of $1 trillion or higher. They’re the MAGA stocks — Microsoft, Apple, Google and Amazon.

And he says you can use this formula to identify the next likely company to join their ranks — as you’ll see when you follow this link.