An Election-Proof Asset Class (Not Gold)

Let’s talk about the election and your money.

When last we tackled the election on Friday, we posited the not-at-all mainstream thesis that based on what people tell pollsters about who they think will win in November… as opposed to who they plan to vote for… Donald Trump is on his way to a second term.

But let’s assume Joe Biden wins. What then?

The biggest impact on your money is likely in the tax code.

Begin with corporate income taxes and the potential effect on stocks you own: Under the Trump tax cuts of 2017, the rate was slashed from 35% to 21%. Biden seeks to bump the rate back up to 28%.

On balance, that should mean publicly held companies will engage in fewer of those sweet, sweet share buybacks — in which firms can raise their share price without actually producing any new goods or services or making their existing operations more productive.

Then again, companies engaged in plenty of buybacks under the old corporate tax rate. If you’re a CEO sitting on a pile of cash… and you look around and you don’t see any good place to invest that cash in the future of your business… then you might as well raise the dividend or buy back shares.

Which is what most of corporate America was doing for the duration of the post-2008 “recovery,” before and after the tax cut. Hard to imagine anything different under a pandemic-and-rolling-lockdown scenario, no?

And what about your own taxes?

Well, looking at Biden’s tax blueprint, you might be surprised to learn he does not seek to repeal the Trump tax cuts lock, stock and barrel. (Barack Obama left most of the Bush tax cuts in place, too — even after he secured a second term.)

On the other hand, if you’re in a high-tax state, Biden seeks to repeal the $10,000 cap on the “SALT” deduction for state and local taxes.

But on the other-other hand, filers who itemize would have their deductions limited once they reach the 32% tax bracket — which for single filers this year is $163,300.

Because that $137,700 number rises with inflation every year, eventually the “doughnut hole” will close and all income would be subject to payroll tax.

And no, those higher “contributions” to the system during your working years would not translate to higher benefits in retirement. Social Security would become, well, just another income-redistribution scheme — which is not what Social Security’s architects envisioned in the 1930s.

What’s the best election-proof investment? Something that stands to gain no matter the outcome?

“With the combination of a highly volatile election and foreign adversaries flexing their muscles,” says Jim Rickards, “you’ll want some portfolio exposure to defense stocks that can rise regardless of which political party wins in November.”

Yep. Last week, Boeing CEO Dave Calhoun said the military side of his business will do great no matter what.

“I think both candidates, at least in my view, appear globally oriented and interested in the defense of our country and I believe they’ll support the industries,” Calhoun said.

“They’ll do it in different ways and they’ll have different teams for sure, but I don’t think we’re going to take a position on one being better than the other.”

That doesn’t make Boeing a buy, given the total disaster that’s the civilian-aircraft side of the business… but military stocks in general are poised for growth no matter what.

For many years, one of this e-letter’s themes has been “making the empire pay.” That is, if we Americans are going to be saddled with a ginormous military-industrial complex eating out our substance… you might as well channel some of its profits back into your own pocket.

For a long time, the way we suggested playing it was the iShares US Aerospace & Defense ETF (ITA). Unfortunately its biggest holding, more than 17% of the fund, is… Boeing.

Under the circumstances, a better way to play it now is the SPDR S&P Aerospace & Defense ETF (XAR) — where Boeing doesn’t even rank in the top 10.

[Ed. note: Jim has a specific defense name in the current issue of Rickards’ Strategic Intelligence, but we’re reserving that name for paying subscribers.]

To the markets, which at last check have barely budged from yesterday’s closes.

Gold is inching up to $1,982. To the reader who carped yesterday about how “buying the dip” doesn’t work very well when the dip doesn’t materialize (at least we think that was his complaint), we have an additional thought…

Corrections can take place the conventional way, with a falling price… or they can be what technician types call a “correction in time” — where the price doesn’t fall but spends a few days or weeks range-bound. Either way, the correction sets the stage for the next leg higher. It might be a correction in time we’re experiencing right now.

Anyway, for the few traders on duty during the dog days of August, their eyes are trained on Washington, D.C. Get a load of this Financial Times headline yesterday…

That’s where we are in 2020 — the “U.S. economy” entirely dependent on the gummint spending money it doesn’t have. Just swell.

Then there’s the latest “almost Mafia-like” development in the TikTok saga.

When we left you yesterday, China’s ByteDance was ready to sell off the U.S. operations of its crazy-popular video sharing app TikTok, to satisfy the White House’s professed national-security concerns. And Microsoft was ready to buy TikTok, thereby enhancing its social-media presence.

Except now the president says he’ll allow the deal to go through only if Uncle Sam collects “a lot of money” in the process. “A very substantial portion of that price is going to have to come into the Treasury of the United States because we’re making it possible for this deal to happen.”

Mainstream reaction is apoplectic… and for once, it’s not wrong. “Probably illegal and unethical,” University of Richmond law professor Carl Tobias tells The Wall Street Journal.

“It is completely unorthodox for a president to propose that the U.S. take a cut of a business deal, especially a deal that he has orchestrated.”

“It is kind of almost Mafia-like behavior,” adds Charlotte Jee from the MIT Technology Review — “threatening a ban which pushes down the price then saying, 'Oh, we should get a cut of that deal afterward to say thank you for what we've done there,’” she tells the BBC.

Meanwhile, we have three questions — food for thought that the mainstream won’t entertain.

Only the last of those three is a yes-or-no question… and that one answers itself.

“Wall Street doesn’t really care who wins the election,” says our recovering investment banker Nomi Prins. “It has been gaming both parties for more than a century” — a process she’s documented in more than one book.

As we saw at the start of earnings season, “the biggest banks used the Fed and the federal government support to make money from trading the markets — not dealing with people or small businesses.

“However… one quarter of great trading doesn’t necessarily mean another one will follow. The biggest U.S. banks have collectively set aside $52 billion to cover potential losses on loans and credit card payments in the wake of the pandemic.

“Meanwhile, the midsize and community banks follow strategies that involve much less trading. Instead, they concentrate more on local and community lending. That should mean there will be a more measured recovery as the pandemic’s main impact eventually subsides and we find ourselves in a new economic normal as a result.

“This will have a positive net benefit to their communities and therefore to the local Main Street economy.”

There’s no shortage of landlords who stand to be stiffed this year — whether they own residential or commercial property — but when the tenant is none other than Apple? 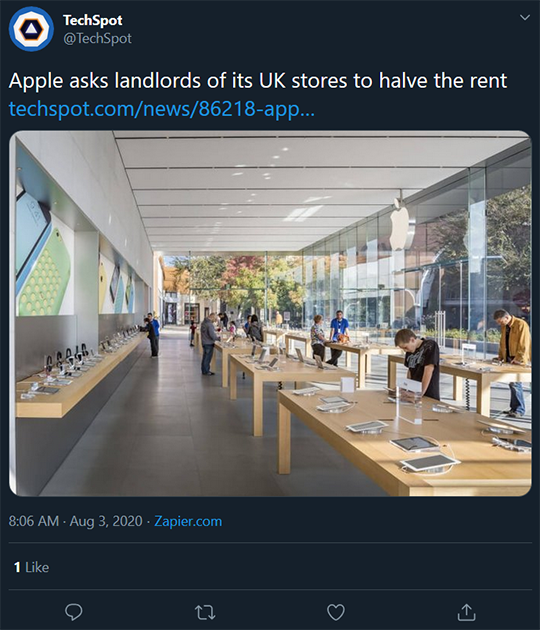 “Apple is pushing for huge rent reductions across its U.K. stores despite its sales soaring to new heights during the lockdown,” reports The Sunday Times of London.

“On one hand, you can understand Apple's dilemma,” says the techie website The Register. “Like other nonessential retailers, the government forced Apple to close its retail outlets between March 23 and June 15.”

Too, Apple Stores tend to be concentrated in costly downtown districts.

“Then again, this is Apple we're talking about. By the end of Q2 2020, it had $192.8 billion cash on hand – or roughly the combined GDPs of Belarus and Ukraine… It can withstand a few losses from its retail operation, while its commercial landlords are likely being squeezed across the board.”

“This chart is meaningless,” a longtime reader complains after we showed the top 10 single-day point losses in the Dow industrials — all but two of them from this year and the other two from 2018.

“You need to use percentage charts.”

We understand what you’re saying, and ordinarily we’re sympathetic. But our focus yesterday was on the concentration of steep point losses. Something similar happened during the Panic of 2008.

In fact, 2008 is super-interesting in this regard. On Sept. 29, the House rejected the first bank bailout bill and Wall Street threw a snit (that, or the Plunge Protection Team “reverse engineered” its usual operations to send a message to recalcitrant congresscritters, heh)… and the Dow tumbled 778 points. That was a 7% drop.

Three steeper percentage drops came later in 2008… but by that time, the Dow was already so down and out that the point losses were actually less.

P.S. We wouldn’t quite call it the bright side of the depression, but…

… there’s one thing that stands in their way.

In fact, what’s coming down the pike could change everything about how you earn money, spend money and invest your money for retirement.

It could also present you with a chance for incredible, generational wealth.

Follow this link to find out how — you won’t regret it.