Last Tuesday, Walmart announced earnings for the quarter ending July 31, and a clear trend is emerging…

“Long after the spring spike of pandemic-related pantry loading and panic buying, Walmart Inc. is still benefiting from all the ways COVID-19 has reshaped consumer needs and spending patterns,” says Sarah Halzack at Bloomberg Opinion.

Walmart’s earnings report, in fact, shows U.S. sales increased 9.3% over the same period last year — a solid earnings beat that blew analysts’ estimates out of the water. That number’s down just fractionally from the previous quarter, when the same stat topped at 10%. 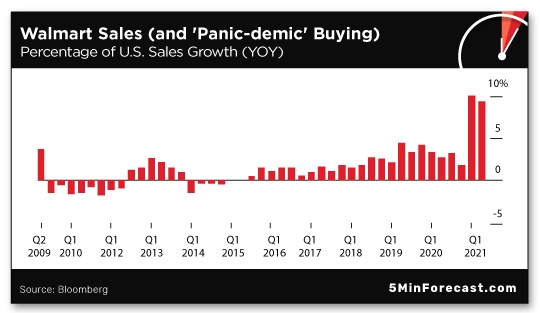 However, Bloomberg draws an eyebrow-raising conclusion: “Even as the mega-retailer unveiled another strong quarterly performance, the underpinnings of its results should serve as a wake-up call to Washington: More government stimulus is urgently needed because it was crucial to keeping consumers off the sidelines this summer.”

“I'm sure we'll be debating the wisdom of the government stimulus for many years to come,” says retirement and income strategist Zach Scheidt.

“But one thing is sure,” he says, “government payments made a big difference for retail companies who count on consumer spending to keep them afloat.”

According to Zach, that includes Walmart… and another retail powerhouse that’s emerged as a clear winner throughout the pandemic: Home Depot.

“[Home Depot] shares took a hit when the coronavirus crisis first began,” says Zach, “but the stock has since surged to new highs… 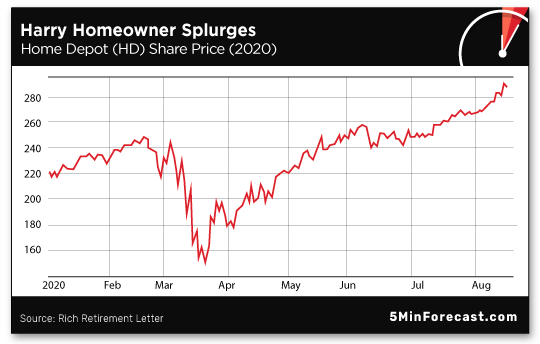 “Home Depot is benefiting from several trends including consumer spending, low interest rates, a migration away from crowded cities and the work-from-home revolution,” says Zach.

“Demand for new homes (along with a surge in remodeling projects) has helped HD grow sales by 23% over the last quarter,” he continues. “That's the kind of growth that should ultimately lead to higher dividends and a steady rise for the stock price.

“Similarly, Walmart has been a great holding for retirees and investors getting close to retirement,” Zach says. 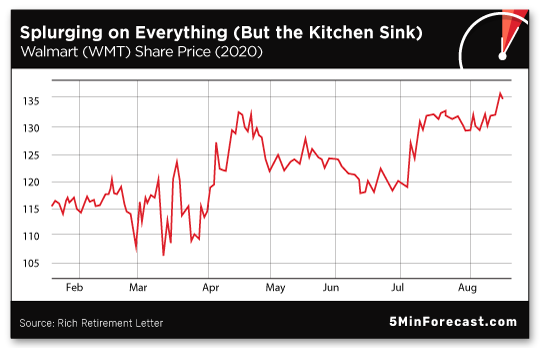 “But there’s certainly room for both companies to thrive in this market,” says Zach. “And WMT [has proven] that it’s ready to compete in an online shopping world… The company reported a 97% increase in e-commerce sales.”

“I like to call HD and WMT ‘retirement champs’ because they can make a huge difference for your retirement fund,” Zach says.

“Both companies sell products that shoppers are going to buy regardless of what's going on in the economy,” he says. “And that means both HD and WMT should have stable businesses in just about any environment.

“Better yet, both stocks pay out generous dividends. These dividends can help pay for your day-to-day retirement expenses while still allowing you to hold onto your shares.

“Shares of HD currently pay a 2.1% annual dividend, and the company has a history of increasing its dividend over time,” Zach says. “In fact, Home Depot actually boosted its dividend by 10% last year.

“Investors in WMT receive a 1.6% annual dividend,” says Zach. “And based on the company's surging sales, WMT has plenty of room to increase its dividend while still keeping plenty of cash on hand.”

“Shares of the biggest companies like Apple, Microsoft, Amazon, Google and Facebook have received a lot of attention (and a lot of investment capital) over the last few quarters,” Zach says.

“As more investors park capital in these popular stocks, the share prices have grown to unimaginable levels.”

To Zach’s way of thinking: “This creates a big opportunity for rotation, which is when investors eventually start pulling money out of the popular stocks and start buying some of the names that have been overlooked.

“When this shift occurs, we should see a tremendous amount of money flooding into ‘reliable’ stocks like HD and WMT. And that flood will naturally cause shares to surge higher.

“So even though HD and WMT are currently hitting new highs,” says Zach, “there’s still a lot of room for these stocks to continue higher. And if you're holding the shares, you'll still be able to collect your growing dividend payments along the way.

“Income stocks like HD and WMT are great plays to help you protect your retirement savings, generate much-needed income and grow your wealth over time,” Zach concludes.

[Ed. note: Zach just took the wraps off his brand-new book — Big Book of Income 2.0: 50 Ways to Live a Richer Retirement Without Getting a 9–5 Job.

This book is perfect if you are…

There are only 450 copies set aside today, and they’re going on a first-come, first-served basis…

Claim your copy right away.]

Following up on the TikTok saga, Chinese parent company ByteDance is suing the U.S. government, claiming the company hasn’t been granted due process to defend against claims that the social media platform threatens national security.

A claim spread by a certain Big Tech OG…

Zuckerberg’s been lobbying Washington to bring down the banhammer on TikTok since last fall. And the ungentle persuasion has continued in 2020….

“Facebook overall in the first half of this year spent more on lobbying than any other single company, according to data from the Center for Responsive Politics,” reports the Daily Mail.

Then there’s this: “Facebook… established an advocacy group, called American Edge, that has begun running ads extolling U.S. tech companies for their contributions to American economic might, national security and cultural influence.”

[Economic might? Sure. But national security and cultural influence? Get real! We haven’t forgotten Russian bots using Facebook to sway U.S. elections. Nor is that post of Uncle Bob snoring after Thanksgiving dinner exactly rocking American culture.]

Of course, TikTok might be a proxy for Facebook’s real target… Microsoft confirmed — for the first time, in a blog post — that the company’s pursuing TikTok’s U.S.-based operations in a deal that would wrap by Sept. 15.

A company statement says: “Microsoft appreciates the U.S. government’s and President Trump’s personal involvement as it continues to develop strong security protections for the country.”

In other words: “Two can play at this game, Facebook.” And word’s coming in this afternoon that Oracle’s making a play for TikTok too. We guess three can play…

As wildfires rage in California, technology expert Ray Blanco warns: “We could have a new disaster on our hands very soon.” This time on the other side of the world…

“The Three Gorges Dam, finally completed in 2012, is the largest hydroelectric dam in the world. It has a generating capacity that could power the 400 million people that live in the river’s basin.

“Demand for energy is huge,” Ray notes, “and the Chinese government and scientists have pushed the dam to its limits.

“Seasonal floods this year in China have left 140 people dead or missing since last month,” he continues. “And heavy floodwaters have pushed the Three Gorges Dam into uncertain conditions.” 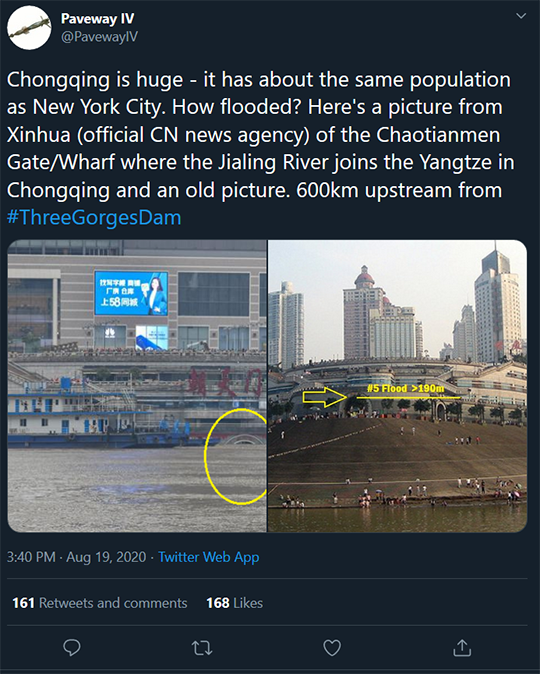 In fact, in order to alleviate pressure on the Three Gorges Dam, government engineers “blew up one of its other dams to let water through on a different river.”

But if the Three Gorges Dam fails? “A disaster unlike anything the world has ever seen,” says Ray.

“The dam’s reservoir holds 9.43 cubic miles of water, powers a third of China’s population and is linked to… the country’s agriculture,” he continues. “Not to mention there are millions of people living in towns and cities along the path of the Yangtze.”

The global impact of the dam’s failure? “A large number of pharmaceutical companies exist in these cities. And disruption of the supply chain would be catastrophic.

“This means a decrease in production for things like medicine [ingredients], medical devices and other essential materials needed in the health care industry.

“Furthermore, it’s estimated that the Yangtze River basin generates nearly half of China’s economy between industry for companies like Walmart and Apple to fashion brands like Nike and H&M.”

As for the impact on agriculture: “Farms around the Yangtze River account for nearly half of all of China’s agriculture output,” says Ray.

“So that’s a global shortage in medical supplies, food and power for hundreds of millions of people,” Ray emphasizes. “So what can be done?” The terrifying answer: “If this is going to happen, we cannot stop it.”

That’s why Ray’s looking for ways now to protect investors from the economic fallout from this disaster. “I’ll be sure to let you know the minute I find something promising,” he says.

Per Thursday’s episode of The 5 — “Countdown to Constitutional Crisis” — a reader says: “Trump publicly announced that his loss of office could only occur by election fraud, and he will not leave office!

“Your biased, ignorant opinions contrary to military officers are delusional.

The 5: Upset that we disregarded the opinions of two ex-Army officers? Well, we were in good company…

If our contributor had followed the issue carefully, he’d have read how Nagle and Yingling’s open letter — published at website Defense One — fell flat with the men and women in uniform too.

Claim your copy of BIG BOOK OF INCOME 2.0 before it’s too late.