If you lingered for Powell’s Q&A session after his Zoom call (or the erstwhile Jackson Hole symposium speech 2020), you heard Powell defend the Fed’s backstopping pretty much everything… 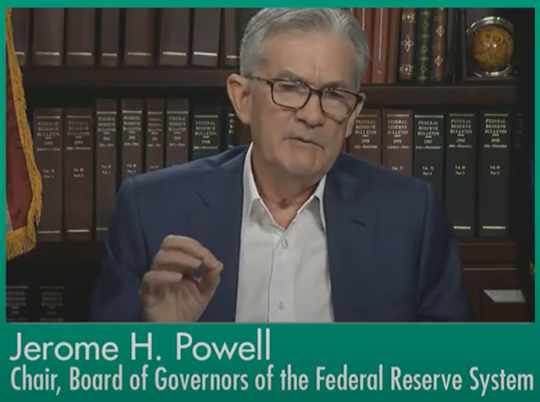 One of Powell’s more animated moments…

Something that grabbed our attention was Powell’s assertion the Fed would backstop the municipal bond market… a market we featured at The 5 yesterday. Question: Was Powell signaling salvation for Big City, USA?

Indeed, the Fed’s Municipal Liquidity Facility (MLF) — established under the CARES Act — is meant to “provide a liquidity backstop” for approved muni bonds issuers, according to the N.Y. Fed.

“That means the program isn’t open to most local governments” because “there are only 10 cities and 16 counties” in the U.S. that fit the criteria.

For our purposes this morning, we’re most interested in what Powell had to say about the Fed and inflation…

Powell and company got a brand-new bag: “The Fed’s new approach could be viewed as a flexible form of average inflation targeting, allowing inflation to run moderately above or below the Fed’s 2% target for some time,” Trading Economics reports.

“This means that interest rates could be left lower for a longer period despite a rise in inflation.

“The Federal Reserve has left the target range for its federal funds rate unchanged at 0–0.25%… but opened the door for further monetary easing to support the world’s largest economy through the pandemic.”

Oy… further monetary easing. Sometimes you gotta wonder if Powell — who is a lawyer, and not an economist — understands how this whole money thing works.

For that, we turn to Robert Kiyosaki, bestselling author of Rich Dad Poor Dad…

“Modern money is simply an idea backed by the faith and trust of a government,” Robert says.

“Paper money is worthless in and of itself,” he continues. “It is a representation of the faith economies have in a country’s economy rather than something of value like gold.

“The value of this ‘fake money’ always goes to zero relative to real money, like gold,” Robert reminds us. “This is partially because governments can print as much as they want since it is tied to nothing of value… it is just paper.”

“Today’s money is a currency,” Robert says. “Like a current, today’s money must keep moving in order to survive. The rich understand this, so they always keep their money moving into things with tangible value: assets.

“The rich invest their money in assets that produce more money in the form of cash flow, which they can use to invest in more assets,” says Robert. “This is the velocity of money, and it is the reason why some people are rich and most others are poor.

“Here’s the formula for using money to get rich:

The way Robert sees it: “If you know how to use money to get rich, it’s basically a license to legally print your own money. The way you can do this, legally, is via… a return on investment (ROI).

“I always look to have an infinite return on my investments,” Robert says.

An infinite return? “When you get all your money back from an investment in a cash-flowing asset, you still own that asset and you enjoy cash flow month in and month out.

Other people’s money — or good debt — can be leveraged “to purchase assets that put cash in your pocket each month. Good debt is things like a loan for an investment property, venture capital, etc.

“You need financial intelligence to use [good debt] appropriately,” Robert says, “but when you do, you get to printing money that much faster.”

[Editorial note: If you understand that the secret to getting rich is to have a reliable stream of cash flow, then please click here.

Robert has a winning strategy probably 99% of people aren’t even aware of… which can cause money to add up in your accounts — week after week, month after month, year after year.

And this method for generating cash flow every week has an 85% win rate… Got your attention? Learn all about this powerful wealth-building strategy.]