The S&P 500 Index has a dirty little secret… Despite breaking through to an all-time high Tuesday — the 17th such record set in 2020, by the way — you can’t really trust the index’s performance.

“That’s because, absent the insanely good performance from Big Tech in 2020, the S&P 500 would still be in negative territory,” says our quantitative analyst Jonas Elmerraji.

“The 92 stocks in the S&P 500 from the Tech and Communication Services sectors (which now includes stocks like Google’s parent company and Facebook) have dramatically outperformed the other 408 stocks that make up the S&P 500.

“Meanwhile, the other 408 stocks in the index are in negative territory,” says Jonas.

“The data prove an important point for investors this year: From a performance standpoint in 2020, there’s tech and then there’s everything else.”

“As the biggest tech stocks continue to trade higher, the value of a few ‘mega-cap’ tech stocks now account for a huge portion of the overall market,” Zach says.

No company is more mega than Apple. The company’s market cap comes in at $2 trillion now, making it the most profitable American company in history. And as it stands, AAPL shares are trading over 40% higher for the year.

“Other big names in tech may not be far behind,” says Zach. “Both Amazon (AMZN) and Microsoft (MSFT) each have a market cap priced near $1.6 trillion. 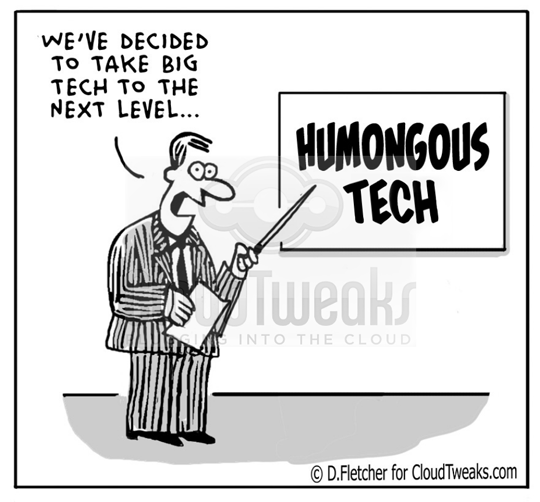 “What's next for the biggest tech stocks in the market?” Zach asks. “Is ‘Big Tech’ too big? Is there risk of an implosion? Are there still opportunities left?”

The answers vary, but we find some food for thought at The Wall Street Journal where James Mackintosh writes: “There has been a lot of concern recently about the stock market being top-heavy, dominated by just a handful of companies, and that this might spell trouble for future returns.”

He notes: “The five biggest companies today — Apple… Amazon, Microsoft, Alphabet and Facebook —make up 25% of the market value of the S&P 500.

“The danger… is that the market is overly reliant on a group of companies that are all a bet on disruptive innovation — the big five and a wider circle including other fast-expanding growth companies such as Netflix and Nvidia.”

So because of Big Tech’s outsized share of the broad market’s capitalization, including its concentration in “disruptive innovation,” the article warns: “Anything that hurts this group [of stocks] could drag down the wider market, even if other stocks are fine.”

Back to our pegasus company *wink* Apple…

“Apple is sitting on more than $200 billion in cash that is earning nothing for shareholders,” Zach says.

“Everyone who’s holding Apple stock — from everyday investors with a few shares to giant hedge funds and pension managers — effectively owns the company.” And CEO Tim Cook should feel the pressure to put Apple’s “dry powder” to use. 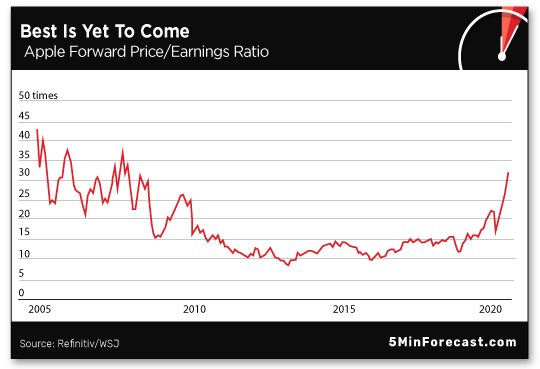 The company’s increasing forward P/E ratio indicates the market’s optimism that Apple stock is slated for more growth. That’s not so much in question. But how to best use Apple’s cash hoard?

“We’ve been anticipating Apple to go on a buyout spree for some time,” says Zach. There’s no better way really for the company to diversify its offerings, expanding beyond cellphones and other gadgetry.

And Zach’s proprietary “One Day Bonus Indicator is designed to scan the options market and zero in on a specific type of unusual activity.”

Here’s how it works: “When a buyout deal is being negotiated, people who are ‘in the know’ often act on their information, placing bets before an announcement is made,” Zach says. “Once the news is out and the stock shoots higher, these investors get paid.”

Insider trading? Absolutely. But it happens all the time…

Zach says: “Thankfully, our indicator gives us a chance to legally profit from impending buyouts. It scans for insider trades in the options market and alerts us when a deal is about to happen.”

Most recently, Zach and his team have landed on a company that should benefit from the pandemic with its “contactless systems.” And once the pandemic is in the rearview, this competitively priced company would be a nice complement to Apple’s music business.

Curious? No time like the present to learn the ins and outs of Zach’s “One Day Bonus Indicator” system. He’s offering a generous credit to the first 250 readers for access to his team’s research.

This offer is time-sensitive, however… So don't waste another minute. Click here to learn more.

“The times they are a-changin’”: Several stocks are rotating out of the DJIA.

➢ For the major economic number of the day, orders for durable goods — anything designed to last three years or longer — rallied 11.2% in July with recovering demand for new cars and trucks. But orders for industrial goods were weaker; new orders floated just 2.4%.

Getting back the Dow’s revolving door: “The changes are driven by Apple’s coming stock split, which will reduce the technology weighting in the price-weighted average.”

Apple and Tesla are scheduling stock splits next Monday with a 4-to-1 split and 5-to-1 split, respectively.

"Tesla and Apple are already two of the best-performing companies on the U.S. stock market and all the evidence suggests their upcoming stock splits could act as a tailwind for the value of their shares," said analyst Adam Vettese at research firm eToro.

How much of a tailwind? According to eToro’s research that looked at 60 years of data surrounding 10 big-name brands and stock splits, “Apple's and Tesla's stock prices could surge by about 33% in the 12 months after their stock splits,” says Market Insider.

“On the heels of a debt crisis… there is one sector that could be majorly affected: the municipal bond sector,” says Graham Summers, author of The Everything Bubble.

State and local governments, on the other hand, cannot. “To compensate for this, the income earned from muni bonds is usually tax-free.” One can assume muni bonds have higher yields too.

“It’s no secret that certain cities and states have racked up enormous debt obligations,” Graham says.

The top-three biggest offenders? San Francisco, Chicago and New York City; in fact, NYC alone carries a $196 billion debt load. Graham notes: “These three cities were already up to their eyeballs in debt before the COVID-19 pandemic shutdown[s].

“Cities and states pay their bonds payments using tax revenues. And with much of the U.S. shut down for several months in 2020, tax revenues have completely collapsed…

“On top of this,” Graham continues, “taxpayers are fleeing big cities to avoid higher taxes and civil unrest that has plagued these areas for the last few months.” With 73% of Americans now saying they would ‘prefer to live in either a suburban area or a rural setting, rather than a large city or urban area,’ according to a Rasmussen poll.

“As a result, many big cities like New York City and Chicago are teetering on the brink of insolvency.”

“Keep an eye on the municipal bond sector,” Graham cautions. “We might have the makings of another collapse.

“Indeed, high-yield muni bonds have been steadily losing momentum since early June. As I write this, they’re just barely clinging to their uptrend… 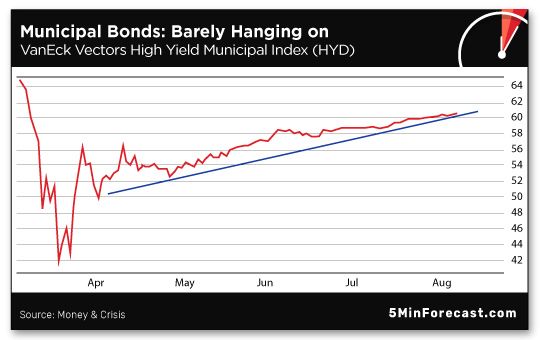 “This is why the Democrats in Congress are pushing for a $3.4 trillion stimulus program, of which a large portion would go toward bailing out the largely blue cities that are in trouble.

“President Trump has bypassed this by issuing executive orders to continue unemployment benefits and other COVID-19 relief policies.” On-the-bubble Democrat cities and states then would have to file for federal bailouts.

“Will President Trump risk letting a large city like New York or Chicago go bust?” Graham asks. “He wouldn’t win those cities in the election regardless of whether he bailed them out or not.

“Moreover, playing hardball with the Democrats on this issue would be a big win for Trump with his base.”

All to say, watch as the dominos fall in the municipal bond market…

A reader with an enquiring mind says: “I've been keeping up with current events re QAnon. I am NOT a follower. But I find it curious…

“Could this anonymous spread of disinformation be a Russian ploy to weaken our national resolve, dividing us, distracting us from the truth, wasting our time on trivial pursuits?

“I Googled ‘QAnon + Putin + propaganda’ and, strangely, somehow got blocked from searching. Later in the day, however, my search was successful.”

The 5: Without getting into the QAnon weeds, who knows if Russians are ultimately behind it? One thing we do know, Americans have done a bang-up job on their own of sowing seeds of discord…

Also, hmm about Google. But we won’t label you a crackpot conspiracy theorist… In fact, Dave provided excellent context for that term in August 2019. It’s well worth a second read.

“They could just run the two words together and say it's ‘frickin’ good. It rhymes with chicken too, so they might be able to get some extra mileage out of it.”

The 5: You, sir, are a marketing wizard. One word, two syllables: trademark.

P.S. Click here immediately to learn how to claim your credit toward Zach Scheidt’s proprietary research… Research that’ll give you the inside track on market-moving buyout deals…

Please note, this offer is limited to the first 250 respondents.