2020 hasn’t been a smoldering tire fire for everyone… 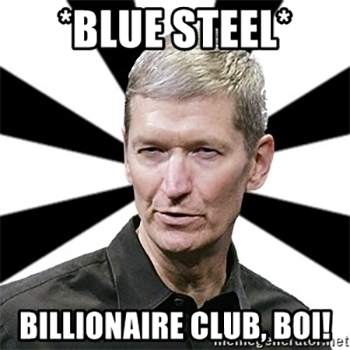 Most notably, we learn Apple CEO Tim Cook’s landed on Forbes’ World’s Billionaires 2020 list with his $1 billion-plus net worth comprised of “money he's earned at Apple through his salary, the number of shares he holds in the company and the estimated proceeds from his share sales,” Business Insider reports.

Big Tech took a spill Thursday with the Nasdaq tumbling 5%, and Apple — in particular — lost 8% or $150 billion of its market cap. It’s questionable then if Cook’s maintained his newly minted billionaire status.

And slumping AAPL shares? Not exactly good “optics” ahead of Apple’s annual dog and pony show…

“In the past this included new devices like the Apple Watch, features like Siri and new editions of current products.”

[At the same event in 2017, who can forget the cringey moment when Apple’s software chief Craig Federighi demonstrated the new state-of-the-art Face ID feature… and it failed. Onstage. In front of a packed house of diehard Cupertinos.] 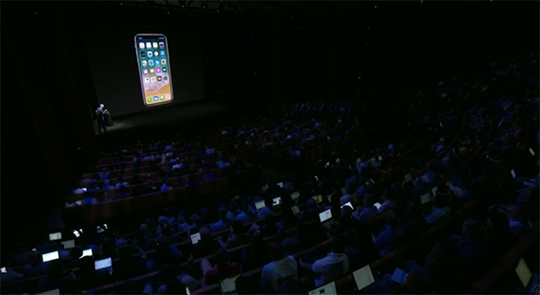 Is it hot in here? *sweating* Or is that just the heat emanating from hundreds of MacBooks?

Ray continues: “Consumers use this event to see what Apple’s about to release headed into the autumn/holiday sales season. Investors, on the other hand, see it as an opportunity to make some profits.”

So what’s Apple ginned up for Tuesday’s powwow? For one, Apple will trot out its latest iPhone iteration (Model 12 for those keeping track). And a pic’s (allegedly) already been leaked… 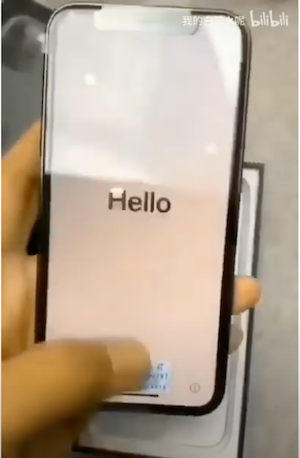 Sure, the pic of the pre-production iPhone 12 is pretty underwhelming…

Ray says: “The most interesting leaks we’re seeing this week aren’t the pictures or videos – they’re the specs.

“Some of them aren’t surprising,” he says. “Screen sizes, faster processors, better cameras and even new colors have all been widely expected for a while now.

“But there is one bombshell… The latest leaks show that this will be the most expensive iPhone ever.

“That’s because of the pricey 5G chips that will be present in the devices,” says Ray. “Currently, 5G chips are incredibly expensive. Apple’s cost is estimated to be around $135 per chip.

“That higher price tag also primes consumers for the higher cost of even more advanced connectivity that could be making its way into iPhones down the line.

“Apple’s… rumored to want to bring connectivity to your phone — wherever you might be,” Ray continues. “Currently, if you want internet access, you need a router or cell tower nearby.

“And the big telecom companies have a stranglehold on Americans — charging enormous monthly fees for their services.”

Even worse? “If you live in a rural area, high-speed internet costs you more than if you live in a city or suburb,” Ray notes. “Meaning millions of Americans are shut out from high-speed signal service just because of where they live.

“But what if there were a way to bypass the telecom companies?” he asks. “And beam high-speed internet right to your phone?”

According to Ray, this market shift away from Big Telecom is why Apple’s possible Sept. 8 meeting is so significant.

By all indications, Apple’s potentially working on a way to transmit fast, reliable signal to all Apple devices… cheaply and efficiently… while cutting out major telecom companies.

“And judging by how they’ve priced their other services like Apple Arcade and Apple TV+,” Ray says, “the cost for consumers might be as low as $4.99 a month. Whereas telecom companies currently charge around $100 a month for high-speed internet.”

Ray’s conclusion? “The big question here is how can you take advantage of what Apple could be about to announce?”

Click here now to see how you can get the answer…. Sept. 8 is right around the corner!

To the turbulent market today, where we spotted this lamestream explanation at the BBC: “Analysts said fears about the economic shock of coronavirus and a possible second wave prompted the sell-off.”

Not helping matters is a decidedly mixed bag of job numbers from Washington.

The statisticians at the Labor Department conjured 1.37 million new (or revived) jobs for August, a hair less than expected. But if you back out government employment — skewed higher by Census hiring — and look only at private payrolls, the number is a disappointment.

On the other hand, the official unemployment rate came in way lower than expected — 8.4%. That’s because the number of people with jobs is rising (good)… and the number of unemployed looking for work is falling (bad).

Looking at the big chart from Calculated Risk showing all the job losses and recoveries from every post-World War II recession, we see continued progress this time around… 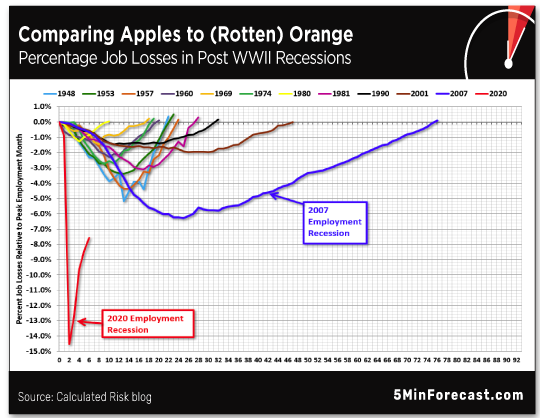 … but the ground still to be made up is massive. Draw an extension of the red line with your finger and we’re not back to breakeven until, oh, maybe early-summer 2022. Which lines up perfectly with what Jim Rickards was saying here yesterday.

The real-world unemployment rate from Shadow Government Statistics fell from 30.0% to 28.0%.

Apropos of the market today (RED), we bring you up to date on the case for copper 2020…

Bloomberg reports: “The global copper market could be on the cusp of a historic supply squeeze as Chinese demand runs red hot and exchange inventories plunge to their lowest levels in more than a decade.”

Indeed, copper — at $6,800 per ton — crested to highs not seen in two years. Bloomberg says: “Current conditions could push prices to $7,500 a ton. Citigroup analysts are even more bullish, advising clients this week that a price of $8,000 is plausible if global stockpiles drop to near the levels seen in 2011, when copper reached a record $10,190 a ton.”

At the London Metal Exchange, “inventories are at their lowest levels in almost 15 years — only enough to last users a little more than a day. A year ago, they would have lasted five.”

Red Kite Capital Management LLP fund manager George Daniel says: “China has been sucking everything up. It feels like we’re getting into a period where there’s just no copper around.

“Everything is working for the copper price at the moment,” he concludes.

For more on the red metal, read ex-investment banker Nomi Prins’ bullish line of reasoning here at The 5 last week…

And for a boots-on-the-ground perspective on the U.S. rental property market, a reader says: “I have been a landlord in the Denver area for more than 20 years.

“I own mostly condos and townhomes, but I do have a few single-family houses too.

“SO FAR rent collections are off by less than 10% from the same time last year.

“If the CDC can keep me from evicting tenants for nonpayment, then what will be next? Will the EPA tell us we can only drive on the second Tuesday of the month? Will the FDA require us to exercise three times a week?

“The overreach of the government is mind-boggling!”

The 5: *clearing throat* Don’t give ‘em any ideas…

“This is not a good time to be in the rental business,” says our next reader. “I have been a landlord for 36 years with a high property count of 18 units.

“The moratorium will only make a bad situation worse. Tenants are already balking at paying rent even if the shutdown has had no effect on their income.

“Out of the six units I have left, four are on pensions and/or Social Security. I, on the other hand, get less than $900 in Social Security and worked to build the rental income to live on.

“I have been told by our Democrat mayor that I can survive by getting new mortgages on my properties but not much of an idea on how I can make the payments. The CDC also says I have the burden of proof that the tenant was not affected by the lockdown… so I really have no way to make a case in court.

“I wonder when the CDC will make a ruling that individuals affected by this can march into Walmart and take what they want since they are having a hard time?

“If the government can nullify a contract, what about the next flu season or severe weather outbreak? Then no contract is worth the paper it's written on.

“Most of the small fry like me are selling out either to the resident living in the unit or to LLCs set up to acquire property.

“We will wind up with a few big fish and a very shallow pond.

We close — appropriately enough — with commendation for Dave’s decade at The 5: “Congratulations on 10 great years,” says a longtime reader. “I love The 5 and look forward to learning something new every day…

“But (heh!) I am really writing in to report on my landlord experience in the last six months.

“I own apartments in several states. We anxiously anticipated April 1 to see if anyone was going to pay their rent and breathed a sigh of relief when most of them did. Then we worried how things would look in May (will they have depleted their savings now?) and again in June (will they realize that evictions are suspended and take advantage?), but collections have only dipped slightly.

“Now we're in September and the federal unemployment has run out. Will this month be tougher? Too early to tell. We have had concern about a long-term eviction moratorium.

“No, we don't want to put people in the street, but we need our tenants to have an incentive to pay if they can. For the ones who can't, we have worked out payment plans and waived late fees if they inform us of the situation and cooperate. We also give them direction on how to apply for assistance.

“Many of my fellow investors are expecting buying opportunities in 2021 for owners who couldn't hold on through these challenges. Will there be a crash? Probably not, but some properties are currently selling for a minor discount, maybe 5% below pre-pandemic prices.”

Thanks to all our readers who took the time to write in, sharing their firsthand observations. And kudos to Dave who’s fulfilled The 5’s mission to help readers discover something new — day in and day out — for 10 years and counting.

We’re taking Labor Day off; enjoy the long weekend! We’ll be back Tuesday…

It’s this coming Tuesday, the day after Labor Day.

Sept. 8 is so important because Apple might make an announcement so big and market-shifting…

It will ultimately change Big Tech, telecoms… even how we shop, communicate and travel forever.

So stop and click here to see what Apple might announce on Sept. 8… and how it affects you.