[A note from Dave: All good things come to an end, the saying goes. And with that in mind, I have a personal announcement to make at the conclusion of today’s 5. Please be sure to check out today’s Overtime Briefing…]

For a guy whose mentality is not one of a “market timer”… our income specialist Zach Scheidt’s timing has been brilliant.

First, the backdrop: As you might have heard, the Nasdaq sank into “correction” territory yesterday — that is, a 10% drop from the previous peak. The drop is all the more startling because of its swiftness — occurring in only three trading days, down from a record close notched one week ago today.

Less than two weeks ago, on Aug. 27, Zach urged his Lifetime Income Report readers to unload one-quarter of their stake in Nasdaq stalwart Apple Inc.

His reasoning: AAPL shares had doubled from their corona-crash lows in only five months.

“You’d expect to see those kinds of gains from smaller companies that suddenly catch Wall Street’s attention,” Zach explained. “They almost never happen with giant, well-established names like Apple. Yet here we are…

“At some point, investors are going to decide that Apple and the other tech stocks are just too expensive.”

So he recommended selling one out of every four shares. “Let’s say you bought 100 shares of AAPL when I first recommended them in December 2015. You would have paid roughly $11,828 for them. Selling 25 shares today at their current price will earn you $12,500… Even if Apple were to go bankrupt and its stock fell to zero, you’d still end up a winner!”

(And that doesn’t count the $1,296 in dividends AAPL had paid out. Remember, Zach is first and foremost an income guy.)

Again, the timing couldn’t have been better. AAPL shares closed Aug. 27 at a (split-adjusted) price of $125. As of yesterday’s close, they were less than $113.

But let’s say you’re not one of Zach’s paying subscribers and you weren’t around in December 2015 when we included his case for AAPL in a rare “three free stock picks” edition of The 5.

The money flooding out of the biggest tech stocks is moving into what Zach calls “tech value stocks.”

As a reminder, “A value stock is a share of a company that’s generating more profit for every dollar you invest,” Zach explains. “So you're getting more for your money when buying shares.”

Amazon, for all its continued growth potential, is anything but a value stock. “Amazon is trading close to 75 times next year's earnings even after the recent pullback.”

In contrast, “Tech value stocks still have great growth opportunities, but you're not paying an exorbitant price.”

Herewith, Zach offers up three possibilities for your consideration…

Again, these are names for your consideration. They’re not formal recommendations to readers of Zach’s Lifetime Income Report. If you’re not yet a subscriber, check out the phenomenal bonus you get when you sign up.

Per Jim Bianco of the institutional research shop Bianco Research, the Nasdaq’s reversal after only three days means the index has notched the fastest 10% correction in its 42-year history. (The old record was six days, set back in February.)

That’s not to say the selling is over. And what if it’s not? Looking at the S&P 500, chart hound Greg Guenthner tells us “If this is indeed a run-of-the-mill technical correction, I think our first important support area will be between 3,200–3,300…

“That’s a pretty wide range… basically the space between the 50-day and the June highs. If the S&P dips all the way to the June highs, that will be about a 10% correction.”

Crude is recovering alongside stocks — up more than a buck to $38.14.

The three-day slump has been steep, but it’s a correction and not the harbinger of a crash in the estimation of Graham Summers, the man behind our sister e-letter Money & Crisis.

It’s the bond markets that are the real indicator of market stress. That’s why the Federal Reserve moved so swiftly this spring to buy not only U.S. Treasury debt but also municipal bonds and corporate bonds.

If stresses were emerging right now, Graham says they’d show up in HYG — a popular ETF made up of “junk” corporate bonds, the riskier stuff that’s not worthy of investment-grade ratings from the big rating agencies.

“HYG has fallen to test major support (red line in the chart below),” says Mr. Summers, “which also happens to be at the same level as its bull market trendline. 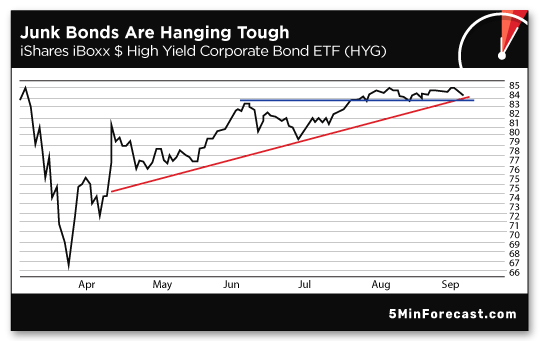 “If we were truly about to experience a systemic event/crash, this ETF should be breaking down in a big way. It isn’t. And even if it DID break that trendline, I’d expect the Fed to step in and intervene almost immediately.”

General Motors’ investment in the electric-truck maker Nikola is a fantastic deal — for GM.

As noted here yesterday, GM is taking an 11% stake in NKLA. Nikola’s share price leaped 40% after the announcement. But our science-and-wealth maven Ray Blanco says GM’s getting the way-better end of the bargain.

➢ Congratulations are in order to readers of Alan Knuckman’s Daily Double Club. They had options trades on both GM and NKLA, and both delivered 50% gains in short order.

Ray says Nikola is not the next Tesla — even though both companies named themselves after the legendary inventor and futurist.

“While Nikola has claimed to have groundbreaking battery technology and sophisticated engineering,” Ray explains, “the deal with GM pretty much debunks that big talk. The Nikola trucks will use GM batteries, fuel cells and parts, and they’ll be engineered by GM engineers and built by GM autoworkers.

“Nikola essentially flew to Detroit with a drawing and said, ‘We made a cool picture of a truck — if we pay you a crazy amount of money, will you build it for us?’” 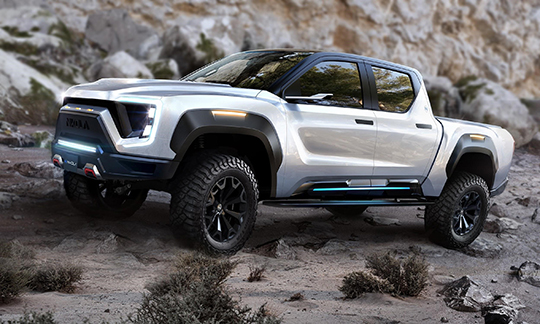 The automotive version of “vaporware” — the Nikola Badger, as shown in a Feb. 10 (!) press release

For $2 billion in Nikola shares, it was an offer GM couldn’t pass up.

GM “gets to own the truck platforms, and if the deal falls through at some point, Nikola has to reimburse GM for the development costs,” says Ray. “GM will also get to sell trucks and parts to Nikola on a cost-plus basis – even if Nikola loses money on the trucks, GM won’t.”

All told, “it’s a terrible sign for Nikola and its supposed tech. And tech is what matters most in the electric vehicle game right now.”

➢ But it’s all good for Nikola founder Trevor Milton. As noted here in June, Milton’s net worth grew 526% in only three months this spring. The U.S. billionaire class made out like bandits from Federal Reserve largesse, but Milton’s performance topped them all.

With copper prices back above $3 a pound these days, it’s inevitable we’re in for a revival of an old theme here in The 5 — extraordinarily brazen copper thieves.

Back during the early-2010s commodity boom, they were legion in our daily missives. Our favorite — the thieves in Kansas City who made off with copper tubing from a high-voltage TV transmitter. They knew what they were doing, too… since they weren’t fried by 35,000 volts of electricity or scalded by the coolant flowing through the tubing.

But in the present instance, the suspected thief wasn’t so lucky. Police in Glenrothes, Scotland, say he tried to snag copper from a live wire last weekend… and got zapped with 11,000 volts.

“The bungling suspect suffered severe burns after he was blasted while hacking his way through safety casings,” reports The Scottish Sun. But he managed to call for help and “was rushed to Ninewells Hospital, Dundee, with nonlife-threatening injuries.”

Guess he won’t qualify for this year’s Darwin Awards…

“Germany is playing a very dangerous game,” a reader writes after our latest update on the economic warfare surrounding the Nord Stream 2 pipeline.

The 5: Amen, brother. After two devastating wars in a 30-year span, Germany and Russia have managed to avoid conflict for the last 75.

Clearly the leaders of both nations want to keep it that way, and it would be better for everyone if they did. But Washington, as usual, can’t leave well enough alone, right?

On the subject of ABBA’s over-the-top ’70s costumes being inspired by Swedish tax law, we heard from a retired tax preparer…

“Sweden may have stolen that idea from the IRS, as there's a similar deduction for the American self-employed.”

The 5: Musta been a sweet tax break for Liberace back in the day, huh?

OK, I won’t keep you in suspense after the shameless “tease” up top. I’m not leaving The 5 after 10 years.

But a crucial phase of my “other” project is winding down in only five more days… and I’d hate for you to miss out.

As mentioned here yesterday, our hand’s being forced: We have no choice but to shut down new readers’ access to The Profit Wire — which has been far and away our most popular high-end trading service the last three months.

After next Monday, it’s over. And not for just a few days. We’ll reopen access — eventually. But not for several weeks or months.

I’ll talk more tomorrow about why we’re compelled to make this move. But today, I’d like to share the hard numbers about The Profit Wire’s recent performance.

These aren’t backtested figures. These are the real-world results of readers like you…

It’s a proprietary indicator — wait till you see how much we laid out for access — called QIT-4.

As you surely know, stocks can explode the minute news hits the tape. And even if you move quickly after an announcement, you’re usually too late to make a big gain.

But with QIT-4, you have an edge. You’re in and out so fast, you can make money in practically any market — up, down or sideways.

Maybe that seems like an unfair advantage… but it’s 100% legal to do.

We have the ability to cut through the noise and find the real news, the market-moving news — unlike anybody else. Follow this link and I’ll walk you through exactly how QIT-4 works.

Again, we can keep The Profit Wire open to new subscribers for only five more days. After that, it might not be open again until next year.

I’m sure you’ve seen this message a gazillion times over the last year or so. If you haven’t acted on it yet, time’s running out.

And now that I’ve clued you in to the real-world results — the tangible gains of readers just like you — I hope you’ll look at it in a new way.